In December 2014, German navigators Tristan Harders and Nico Hauschildt decided to leave the musical vessel they were part of and build a new one for themselves. They created a mighty ship called Terra Atlantica with the assistance of crew members Mike Terman and Karim Djemai. In its first incursion, the strapping watercraft sailed through unknown and dangerous waters to create their debut album “A City Once Divine”. With a notable power metal proposal, it narrates nautical stories related to the mythical city of Atlantis and other myths of the seven seas.

Now, Terra Atlantica is returning safely to port from their newest journey that took them farther than ever before, through stranger tides, murky seas, and encounters with fantastic beasts. On this new adventure, they lost two crew members, but veteran sailors Tristan and Nico managed to incorporate Julian Prüfer and Frederik Akkermann to complete the Terra Atlantica company.

It is reported that the expedition was a success and the unit managed to retrieve the hidden treasure called “Age of Steam”, an anticipated power metal record buried on the confines of the earth. On August 14th, Terra Atlantica will open the ancestral chest and reveal its content to the world.

Every sailor that gets to listen to the musical prowess of “Age of Steam”, should get ready to experience a daring journey. An expedition full of blistering guitar riffs, frenetic drumming, fast-paced bass, epic orchestration, tons of exciting choruses, and countless melodic hooks that will help any ship and its crew navigate beyond the sea of times.

“Rebirth 1815” is in charge of introducing the listener to the concept of the album. With cinematic orchestration that resembles pirate films, the narrator sets us ready for our journey through the vortex, which will take us “Across The Sea Of Time”. This second cut offers everything you could ask from a power metal hymn: a galloping rhythm, appealing choruses, brilliant orchestration, and powerful musicianship. Surely these sailors know how to tame the winds. But being the power metal offering is as vast as the ocean, does the Terra Atlantica crew stand out from all the ocean fleet? Aye! 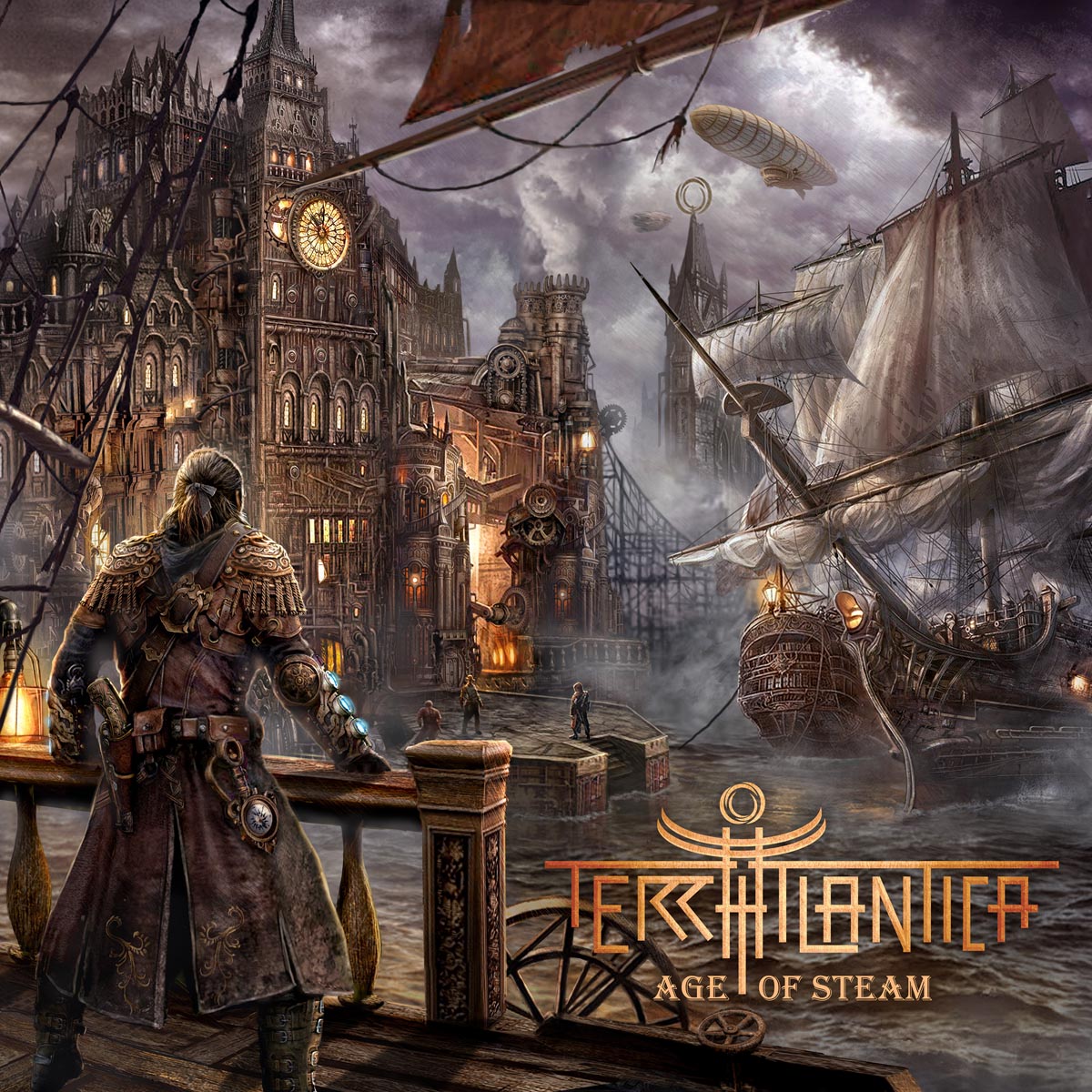 “Mermaids Isle” can vouch for the above. Just as a siren’s song, this track is tough to resist. First, you will be dragged by a sweet piano introduction that will start to put you in a trance through a fantastic orchestration and Tristan’s euphoric voice. Once the extremely catchy chorus appears and after the song’s continuous melodious hooks hit you, it will grab you and will never let you go.

Every vessel that plans to furrow the power metal sea needs massive arsenal for them to defeat any threats encountered. “Age of Steam” and “Forces of the Ocean Unite” are two powerful round shots ready to impact the listener. With “Age of Steam”, Terra Atlantica portrays a steampunk atmosphere in which the listener will witness a guitar battle between guitarists Frederik and Tristan. Whether it is a tenacious riff or remarkable solos, the guitar bullets are continuously fired. Julian and Nico’s rhythm section manages to properly impulse the ship with exorbitant velocity as the whole crew sings a captivating and yet simple chorus as they sail through the night.

Ultimately the Terra Atlantica ship can conquer the waters without being involved in a naval battle. When the inevitable happens, “Forces of the Ocean Unite” becomes a great asset in their search for victory. With a drum cadence, Nico is in charge of calling the sailors to combat. The whole company will unite to sing together most of the song, creating an epic and thrilling battle anthem. The remarkable orchestration, along with the melodic arrangements, will guarantee any victory.

The ocean is full of mysteries and dangers. However, the Terra Atlantica embarkation is ready to face them all with a vast arsenal that includes relentless drum beats, memorable choruses, blasting riffs, impressive orchestration, and an interesting concept.

With “Age of Steam”, the embarkation known as Terra Atlantica proves worthy of navigating the power metal seas. With a compelling concept, bold musicianship, powerful riffs, stellar orchestration, and memorable choruses, this crew certainly knows how to make their way through the seven oceans