Anger comes in many forms. There’s the beastly and primitive blind rage, an all-consuming anger that desires to leave nothing but devastation in its wake. There’s the anger that comes from toxic grief, a bitter, melancholic bile that fury emerges to swallow down. Then there’s the cold, calculating anger, one that results from mulling over misgivings to the point of glacially calamitous retribution. The latter is the part of the deliberate passion with which trash metal band Sylosis approaches their fifth and latest album, “Cycle of Suffering.” Commanding and all-encompassing, “Cycle of Suffering” is an unforgiving demand for introspection among untempered ferocity that embarks on an ambitious and emotional exploration of humanity’s inability to escape perpetual darkness.

In 2016, Sylosis announced that they were embarking on an indefinite hiatus, news that came shortly after their 2015 album “Dormant Heart.” Years of touring and songwriting led principal songwriter and guitarist Josh Middleton to call for a break, citing pressures that he himself had created in the dynamic, polished songwriting that had come to define Sylosis in a world apart. It took almost four years and strength to overcome these binding factors, pushing Middleton to emerge with an album that was still definitive in the evolution of Sylosis’ sound, but was truly a work of passion and fearless new direction. Emerging with explosive intensity, the flames from “Cycle of Suffering” burn brightly through tracks that vary from unforgivingly speedy to pondering.

Sheer variety makes “Cycle of Suffering” a masterful work of art, infusing influences from thrash, metalcore, melodic death, and even progressive metal across twelve tracks to make a listening experience that is as unpredictable as it is engaging. Assertive in its unwavering aggression, Sylosis leads the album with an onslaught of vocal-centric tracks, relying on Middleton’s harsh vocal capabilities before giving way to tracks that push instrumentals to their forefront. Each song opens with a unique and tantalizing hook, enough that each song stands out as its own distinct entity among a comprehensive work of art that does a brilliant job of framing Middleton’s feelings towards and of humanity. There are no long, thoughtless ramblings to be found in “Cycle of Suffering’s” metallic core: short, vibrant punches resonate strongly in tracks that clock in at under four minutes long.

With just over fifty minutes of music distributed across twelve tracks, Sylosis wastes no time in making their mark on listeners, delivering a concentrated, technically demanding, and effortless enthralling thrash epic. Middleton plays with tempo and style fearlessly, unafraid to cut instrumentals down to near nothingness just as the chorus’ climax was mounting, at other times pushing a high-octane guitar solo to its limits in speed and duration. Mouth-watering riffs and irresistible melodies spill out of each song in waves of sonic delectation, a stunning demonstration of Middleton’s prowess as both songwriter and guitarist. 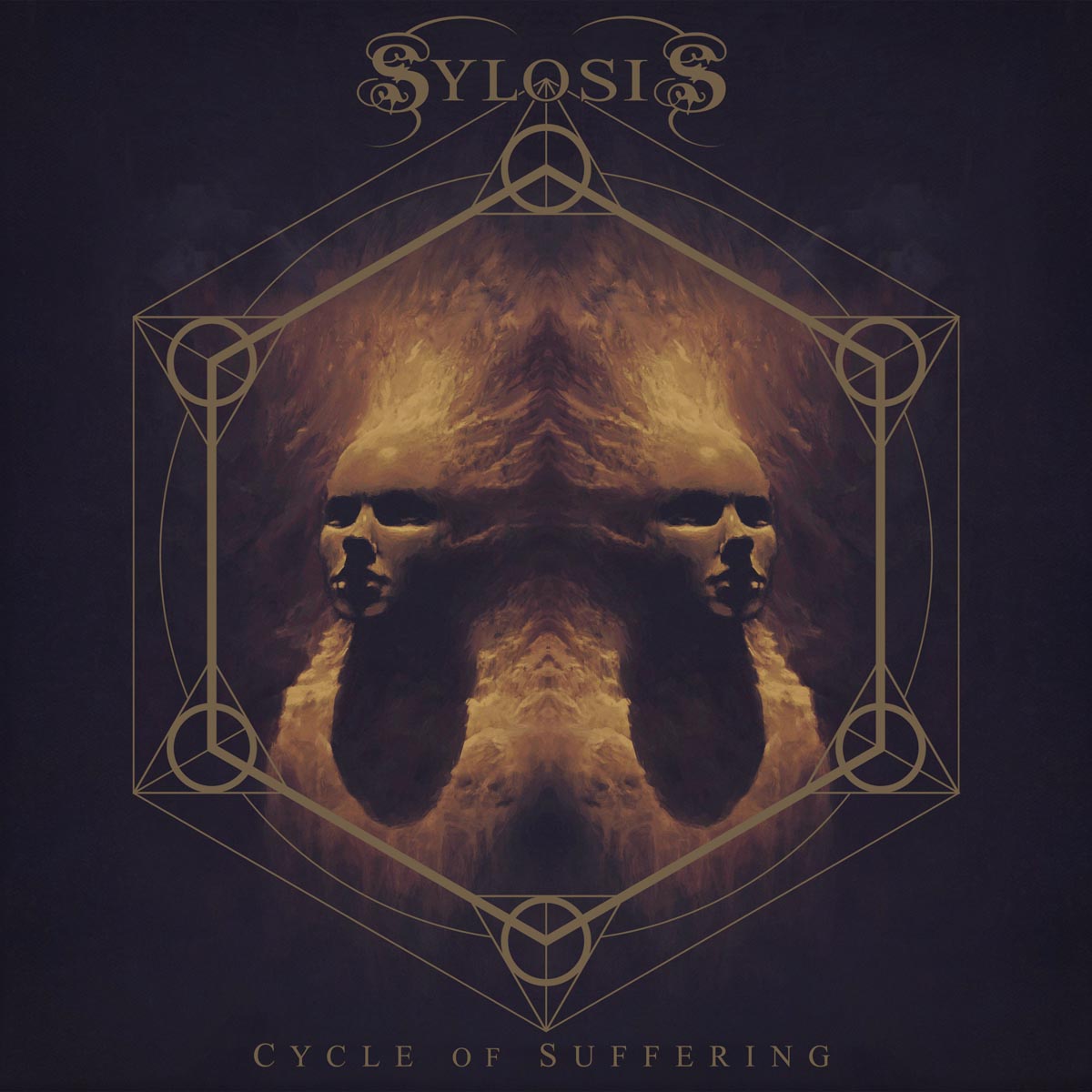 Though the first five tracks tend towards a repetitive verse and vocal presentation, sixth track “Invidia” is a bright and outstanding flourish that instantly captures listener attention. “Cycle of Suffering” tends towards grit and gravel in its throaty bass delivery and steady drums, but “Invidia” is an opening towards a slightly brighter pitch and extra drive on the cymbals. Drummer Ali Richardson takes greater stylistic direction here, elevating Middleton’s vibrant guitar with a steady supporting role. After a passage where Middleton stopped just short of a cloyingly sweet solo, the instruments cut away almost entirely, leaving the vocals to gurgle up from a near suffocated distance back to their full-volume roar. In this small segment, Middleton is able to capture the atmosphere of a desperate struggle for breath, the fight to survive and continue to fight in an expertly plotted rage, one of desperation to find hope somewhere, in someone.

Standout on “Cycle of Suffering” is penultimate track “Disintegrate.” Opening in a fashion that is slow and almost cinematic, its build is one of vivid intent to enchant, and serves as one of the most captivating hooks on the album. Here it seems that Middleton’s rage is at its natural peak, ragged, the carefully plotted points on the verge of falling apart, slower middle passages hinting at exhaustion for the concept, exhaustion for the anger itself. The natural storytelling of “Cycle of Suffering” is that of anger that strives to find hope, and here, Middleton seems as though such lofty dreams are reaching their end. A guitar emerges at the forefront of a mix that was most often vocal dominated, then is buried again, a struggle for survival between Middleton’s conflicting roles. But by the songs end, once again accented by a variety of stylistic flairs and mid-verse tempo alterations, listeners are assured that there’s more than just a tragic end in store. Honing in on the roots of what makes us human, “Disintegrate” is a light through the darkness, but is also the darkness itself. In just four minutes, Middleton manages to take listeners across a full spectrum of emotion, one that proves an evocative story embroiled in the unrelenting ferocity of raw thrash metal. It captures the very essence of the album itself: to be human is to suffer, and accepting that innate agony is exhausting, even infuriating. It is a struggle that Middleton captures with poetic abandon, an ardent performance that it is absolutely impossible to look away from.

“Cycle of Suffering” is thrash through its very core, yet closing song “Abandon” has a rare, delicate touch. Once the anger has run its course, and some attempt at retribution is wrought, Middleton takes the album’s final breath to explore what it means to overlook the devastation that lies in the wake of rage. Hesitant piano opens the song before clean vocals emerge, a gentle airiness to them before Middleton screams again, though this time much more muted. After nearly an hour of screaming and anguish, the contrast of the clean vocals are beyond pleasant, and perfectly balanced against a thoughtful instrumental backdrop. Melodic and poetic, “Abandon” is a more plaintive call that echoes the sentiments that wove “Cycle of Suffering” together. Middleton also demonstrates his continued versatility as a songwriter in a closer of epic and breathtaking proportions, spanning more than six minutes of melancholic grace. This is the capstone to Sylosis in their newly matured state, and a grandiose promise for what the future has in store.

Rejuvenated after their hiatus, Sylosis is back, and absolutely un-compromised. Still retaining their signature style, Middleton has crafted an album stuffed to the brim with emotion, passion, and calculated intention. Expressing anger and grief at the top of his lungs, with an unrelenting guitar as his fuel, Middleton brings Sylosis to the meeting point of melodic and thrash, and impresses with further stylistic flairs. Though the mix occasionally favors vocals and mutes drums, overall production keeps most verses well in check, and never dominates the intended atmosphere of a given track. Trash metal for the modern era, “Cycle of Suffering” is a true work of art imbued with rousing ardor from start to finish.

Sylosis returns triumphant with an album that is filled with a passionate, seething rage and an uncanny testimony of human suffering. Demonstrating musical prowess alongside an exceptional ability to captivate listeners at every turn, “Cycle of Suffering” merges a highly melodic style with the fierce bite of speed-fueled trash for a listening experience that is both diverse and riveting