The newest offering from Stryper was born into a polarized world of intolerance, division and political vitriol. Not exactly a welcoming environment for a collection of tunes that, much like many of the Iron Maiden albums after Bruce Dickinson’s return, continue to be very consistent in quality and very much in line with the band’s brand. That means that it’s not likely to win over those who disdain direct, pro-Jesus lyrics, and will probably piss off those who associate tracks like “Make Love Great Again” with a Republican party bent. But then again, these days people are just looking for something to get upset about, and I’ve always found it a fascinating double standard that it’s socially acceptable to sing about the Devil but offensive to many for a band to sing about God. I mean, even if it’s not your bag, isn’t it a potentially positive contribution to the universe to have more songs about love, forgiveness and living by the golden rule? It’s okay to be a hippy, but not a born-again Christian.

Such is the uphill battle Stryper has been waging for decades now, and while some will always right them off for wearing their faith on their sleeve, many others embrace their melodic metal as an answer to the question posed by  “The Father of Christian Rock” (Larry Norman): “Why Should the Devil Have All the Good Music.”

“Even the Devil Believes” doesn’t break a lot of new ground, but that’s one of its strengths. You know what you’re going to get—front man Michael Sweet’s soaring, astonishing vocals, that gritty and angular Stryper guitar tone, hooky songs with tastefully flashy guitar solos and shimmering, layered background vocals that at times are almost too sweet sounding for the edge of the songs they sit in.

Starting with 2013’s “No More Hell to Pay”, the past four Stryper albums have been remarkably consistent and solid return to form of their commercial zenith, “To Hell With the Devil.” Setting aside their lyrical content, you’ve got a bunch of catchy songs that rock hard, with the band only sounding better as they age. Not many bands from the 80s can say they’re still running as strong as Stryper. Take for example, Dokken, who clearly had an impact on Sweet’s writing and guitar playing style (so much so that Dokken axeman George Lynch teamed up with Stryper’s Michael Sweet for a couple solid releases in 2015 & 2017 under the moniker Sweet Lynch).

In the album opener, “Blood From Above,” there’s a definite similarity to Dokken’s 1984 juggernaut release, “Tooth and Nail.” But whereas Dokken’s recent releases reveal the hard realities of aging in rockland, Stryper may be showing signs of the benefits of not partying as hard as some of their peers. That’s not to suggest that the boys in Stryper are pure as the driven snow, and Michael Sweet has chronicled some of the band’s missteps, including the “Against the Law” period, in his biography “Honestly,”—a fairly vulnerable and interesting read. As some are quick to say, “Christian aren’t perfect. Just forgiven.”

The band’s eventual outing of former bass player Timothy Gaines in 2017 seemed to be full of drama, but the addition of Perry Richardson (formerly with Firehouse), who makes his studio recording debut with the band on this recording, seems to have been a welcome addition of consistency and professionalism. 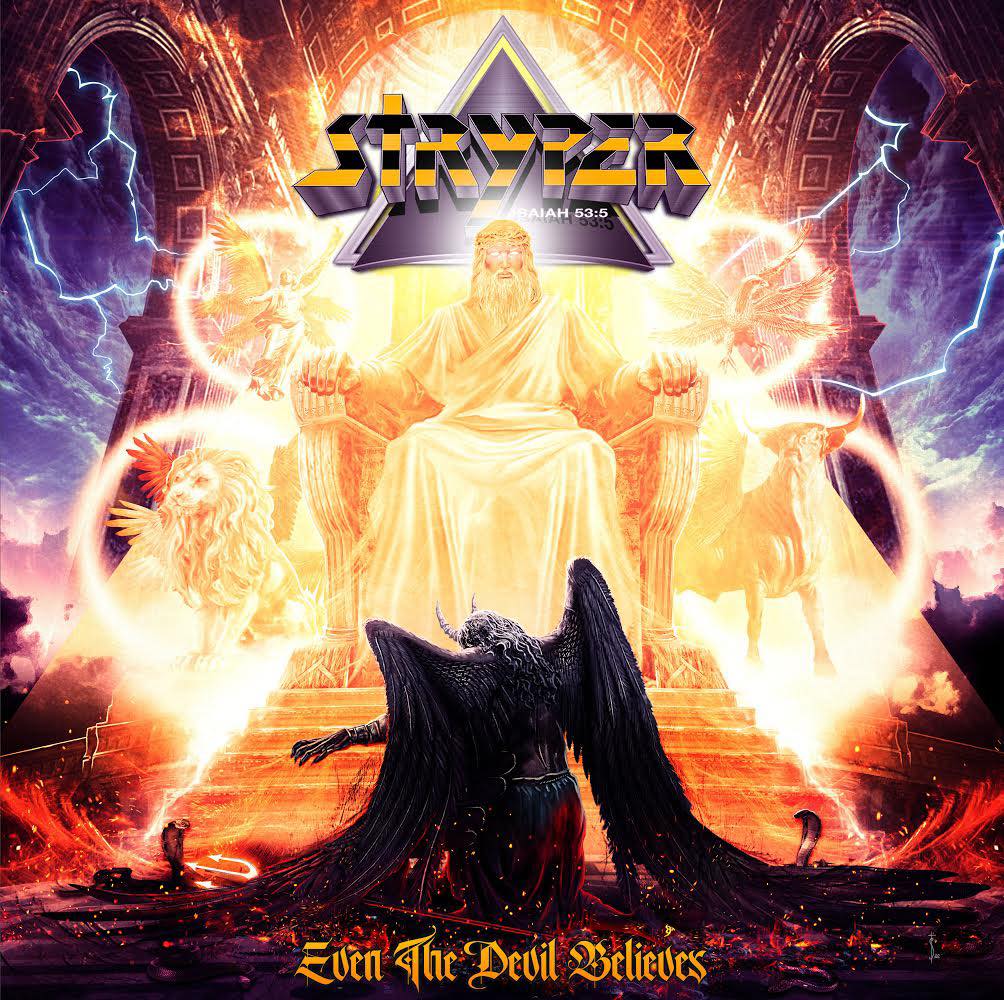 “Make Love Great Again” is another example of Stryper coining a phrase to stir a little controversy, obviously playing off the polarizing Trump slogan about America. The song itself is a solid slab of rock with some saccharine background vocals and a fist-pump-in-the-air type chorus that contains all typical elements of a Stryper track, including a well-planned solo section that is tasteful and memorable. “Let Him In” is a raucous romp that’s instantly accessible and contains additional aspects of that classic Dokken sound. It’s not a complete rip off, but rather a point of reference. I suspect fans of George Lynch’s mid 80s riffs would find much to enjoy in this record, including a roller coaster solo that’s a fun ride. There really is a retro vibe to this record, but that takes nothing away from it.

“Do Unto Others” is a very typical Stryper riff and verse, with a slower, anthemic chorus and serves as a showcase of Michael Sweet’s strong pipes and the grittier tone he’s achieved over the years. He honestly has more testosterone in his pipes than a couple decades ago, and it’s all a move in the right direction. “Even the Devil Believes” also falls into a very classic sounding Stryper riff, with some extra thumping provided by Michael Sweet’s brother, Rob, sometimes referred to as the visual timekeeper. His drumming takes a bit more spotlight on this track, broken up by another guitar solo that may not feature new things, but is executed really well to slot in right where it belongs.

We do get a taste of something new on “How to Fly,” which is a more plodding, slower moving track that’s still sludgy, that features some ELO/Queen-like background vocals that are not typically placed in the usual Stryper sound, but they work and add an unexpected twist to the track. “Divider” picks up the pace up a bit and just flat out rocks into overdrive with some darker sounding vocals and some “Hey!” gang shouts that would be a crowd participation moment if it weren’t for the devastating impact of COVID on the live music scene. Midway, we float through a break that comes up through a flanger with the feeling of breaking the surface from underwater and soaring into the skies. One of the better tracks IMHO.

Another twist from the usual Stryper sound is “This I Pray,” which features an unexpected acoustic guitar and melody that harkens back to Bon Jovi’s “Wanted Dead or Live,” with its slightly western jangle and relaxed pace. I prefer my Stryper on the heavy electric side, but I can’t argue this song provides some diversity without being totally out of place. “Invitation Only” kicks up the rock again, with an instantly accessible verse and a memorable chorus that once again tests the limits of mixing sweet harmonies with edgy guitars, but the tune itself is catchy enough to carry itself forward and stick in your head even when it’s over. Extra points for the harmonizing guitar solo that is both familiar and fun. A little widdly keyboard on the chorus adds to the layers nicely.

Nearing the end of the disc is “For God’s Rock ‘n’ Roll,” which absolutely sounds like it could have been written for Ronnie James Dio to sing on. Michael Sweet doesn’t sound like Ronnie, but the structure and cadence sounds like something that could be at home on “The Last in Line” record. Old school? Sure, but that’s one of the strengths of recent Stryper records. They retain the good vibe of old melodic metal records without sounding dated to me. Bringing the record to a close is “Middle Finger Messiah,” which once again will unnerve those conservatives that love to question the sincerity of Stryper because they flirt with soiling the sacred with a twist of a phrase. There’s a little Megadeth vibe in this barn storming closer, and Michael Sweet adds a little wickedness to the vocals for a harder edge to round out the recording.

In the end, Stryper delivers another solid record that righteously rocks and carries the 80s metal torch “for those who have ears to hear.” It won’t win over a lot of new converts, but it will strengthen its base, and for those who wonder how they can still be going after all these years, “Even the Devil Believes” makes a bold statement that those who can go the distance and still stand strong deserve our respect and admiration—even if you think they are fools for their faith.

When conditions permit, go see Stryper live. You might catch a Bible. It may not be your thing. But you’ll also be catching a solid performance of good feeling rock that continues to roll hard in the toughest of times in the music industry. And to that I say, “Hallelujah!”

“Even the Devil Believes” track-listing

The Christian metal band that broke ground (and hearts) in the 80s on MTV continues to show signs of surprising strength and stamina, delivering strong melodic metal guitar work and vocals that hold up well and send a much-needed surge of legitimacy in a genre that’s long been fading.