Legendary Yes and Asia guitarist Steve Howe cemented his place in the upper echelons of rock guitarists long ago. Having spent the 70s flying high on Yes’ wings, his unparalleled skill and range on the instrument led to him to being voted ‘Best Overall Guitarist’ in Guitar Player magazine five years in a row (1977–1981) and, in 1981, was the first rock guitar player inducted into the Guitar Player Hall of Fame. In addition to being a pivotal figure in his two primary bands, he has rounded out his career with a variety of other projects including the bands GTR and the jazz-based Steve Howe Trio, as well as a long-list of solo albums and “home brew” collections of demos and alternate arrangements.

When it comes to his solo career, Howe has varied from rock instrumental albums (“Turbulence”, “Quantum Guitar”) to acoustic and orchestral outings (“Natural Timbre”, “Time”) to a focus on vocal songs (“The Grand Scheme of Things”, “Portraits of Bob Dylan”). Occasionally these elements have all come together on the same album, most successfully on 1979’s brilliant “The Steve Howe Album”. For his first solo outing in nine years, “Love Is” splits its efforts between five instrumental and five vocal songs, the common denominator being Dylan Howe on drums and Steve on everything else. But wait! Special guest Jon Davison has also been invited to sing and play bass on the vocal half of the album. In a vexing twist, however, Davison is singing the backup harmony parts and Howe himself is singing lead, reversing the usual order of the Yes universe. Oh, the irony. But this is a Steve Howe solo album, not a Yes album, and so the author has every right to claim the lead vocal mic. And here’s the happy result: Howe has never been in better voice.

Although the album nicely alternates instrumental with vocal tracks, let’s approach the vocal tracks first as a whole. While Howe’s harmony vocals in Yes have always blended well with Squire’s and Anderson’s, his lead vocals on solo efforts have usually been a glaring Achilles heel, leading his instrumental pieces to be vastly preferred. Over the past decade he has diligently been working on his vocals and it shows. This is by far the best Howe has ever sounded vocally, adopting a new approach of restrained delivery. To make matters better, layering in Davison with background vocal support (at times verging on lead vocals) is a brilliant move. Occasionally certain songs almost sound like they feature female backing vocals, until one remembers Davison’s wide range which can also lay down a strong foundation in lower registers as well.

Title track “Love Is a River” is certainly the highlight of the album. This six-minute piece succeeds on nearly every level, from its opening multi-tracked guitar intro to its anthemic chorus to its lyrical sentiment. Howe’s and Davison’s voices blend nicely and during the chorus you can almost swear you can hear Squire’s vocals in the mix. Davison’s bass is a solid compliment to Dylan’s percussion and Steve’s transcendent lead lines. The only improvement would have been to extend the outro guitar solo longer, as it feels like Howe is just getting warmed up and could stretch out even further. This is a song which could have easily made the jump to a Yes album, but here it rightly finds a home as the title track. “See Me Through” is a fairly straight-forward but driving song that pulses along at a good clip with a bit of fine Howe soloing at its conclusion. Being the first vocal piece on the album, it slides Howe’s vocals in quite smoothly without hardly even being noticed. Again, that’s a good thing. The other three vocal tracks are less consistent, sometimes frustratingly so. “On The Balcony” offers a much-needed harder-hitting opening riff with space for Dylan to stretch out on the drum kit, along with a lovely vocal B-section (“I’m in a place…”). But the the sentiment of the verses – of relaxing on a balcony leisurely sipping Moroccan tea – seems at odds with the music considering it’s the most energetic song on the album. Not to mention some of the verse lines feel decidedly unpoetic: “It’s too late to worry now. If you’re not ready, you’ll lose the plot!” Likewise, “It Ain’t Easy” and “Imagination” find their melodies, lyrics and vocal delivery alternating between inspired and trite within seconds. Still, it’s rewarding to hear Howe having found his sweet-spot vocally, especially with Davison’s support. 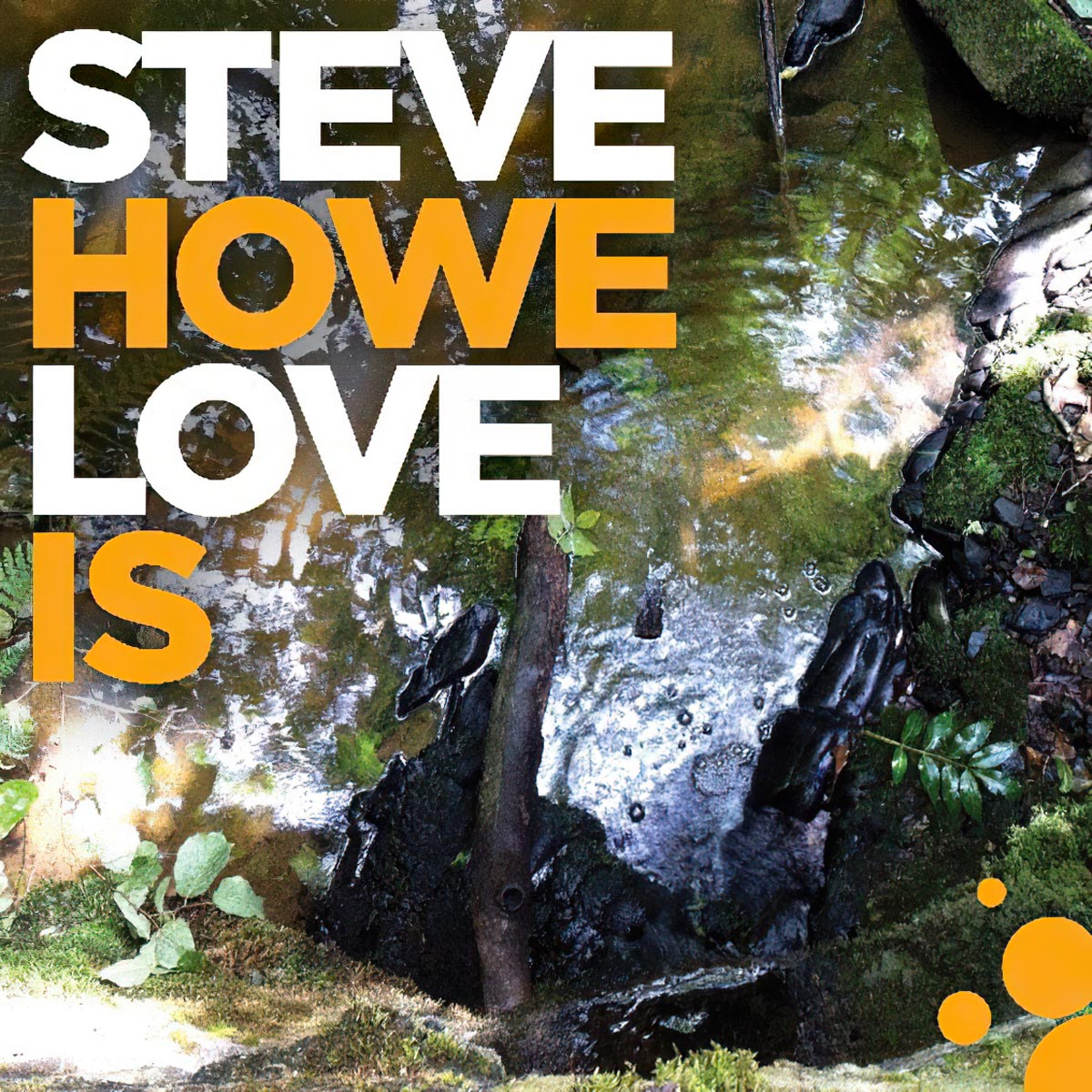 For all of his diversity as a guitarist, many of the songs on Howe’s latter-year solo albums have a fairly systematic blueprint. There have been some real standouts over the decades in terms of melodic impact, with albums like “Natural Timbre” and “Quantum Guitar” containing quite a few “keepers”. Unfortunately, while all of the 5 instrumentals on “Love Is” are enjoyable, for the most part they fall into the standard range of Howe’s writing without any of them breaking through on a creatively original level. While Dylan’s drumming is certainly up to the task (he’s toured with Yes in addition to his own jazz quintet), the framework of the songs seems to limit him stretching out too much. Likewise, Steve Howe on bass doesn’t engage the songs in any unexpected ways. This approach may be intended to keep the focus on the guitar, but remember that one of Howe’s best-ever guitar jams resulted from the dynamic interplay of Howe with Squire and Bruford on “America”. “The Headlands” and “Sound Picture” follow this Howe formula to a T with straight-forward electric playing that is skillfully delivered but doesn’t color outside the lines. “Pause for Thought” incorporates more diverse acoustic guitar layering, better displaying Howe’s forte. And in some ways, the charming “Fulcrum” succeeds the best with its spacious, relaxed delivery.

Intuitively, the whole of “Love Is” has a personal feel to it, as if Howe is trying to reveal a more intimate side of himself. Yet the result still seems to skim the surface without much depth, leaving the listener to just lounge “on the balcony” without quite as much engagement or insight as they would like. The same has been said about his recent auto-biography by some. Aside from his improved vocal performance and the noteworthy title track, “Love Is” demands little of its listener and thus is limited in its dividends. A slightly altered track listing would also help, as the loose feel of “On the Balcony” would have been welcomed much sooner in the running order, and the laid-back “Fulcrum” would have made an excellent closer rather than opener to the album. On the whole, this pleasant collection of ten tracks can sit comfortably alongside the Howe discography, not diminishing his legacy but also not significantly broadening it.

Nine years since his previous solo album, Steve Howe releases “Love Is”, a collection of instrumental and vocal tracks which finds him in better voice than ever before. Howe focuses his craft into short, well-constructed pieces which don’t break much new ground but keep his legacy intact as one of rock’s most versatile guitarists