Come to the mad thrashing palace.

Though hailed as the de facto birth place of heavy metal and most prolific contributor of its second wave in the early 1980s, when it comes to thrash metal, England finds themselves getting little respect and being jokingly referred to as the Rodney Dangerfield of the scene when compared to the United States, Germany and Brazil. Nevertheless, there was a number of consequential bands to come out of the British Isles during the golden era of the late 80s, with the likes of Onslaught, Sabbat and Acid Reign showcasing a stylistically diverse presentation that shouldn’t be understated. Recent years have seen the U.K.’s stock rising a bit with a number of highly compelling acts riding the latest wave of interest in all things that thrash, and arguably the most aggressive of the pack is the Norwich-based powerhouse Shrapnel. Combining a heavily hardcore infused element that is somewhat reminiscent of their aforementioned elders Acid Reign and enough extreme rawness to rival the likes of Destruction and Kreator, calling this quartet a force to be reckoned with would be an understatement.

Perhaps even more impressive than their unique affinity for the Teutonic edge of the thrash spectrum is the fact that they haven’t lost a bit of steam due to some instability in their lineup (notably in their rhythm section) and particularly the recent exodus of their longtime front man Joe Hadley, as demonstrated on their latest fit of studio madness dubbed “Palace For The Insane”. A more than apt replacement for their recently departed bassist and singer in former Sathamel guitarist Aarran, who assumes both duties and winds up pulling things off in a manner comparable to how Schmier has approached his craft since Destruction’s late 90s revival. He even imports occasional flourishes of the blackened death aesthetic of his former band in his vocal delivery, though the overall flavor of his tone tends towards a textbook gruff that is stylistically appropriate. Combined with a massive modern sound and a stylistically nuanced and technical instrumental display that’s in line with the latter days of the Bay Area sound of the 80s, this is an album that can stand toe to toe with titans of yore.

While not unique to thrash, said sub-genre has always had a penchant for inside jokes, and far be it for Shrapnel to be any different. Dedicated to the stage name that their newly recruited front man carried while in his previous band, opening banger “Might Of Cygnus” kicks things off with a brilliant buildup from a dreary ambient intro to thunderous fit of riff-happy rage, splitting the difference between the bite of present day Destruction and the complex melodic contour of the most recent Exodus offerings. Of particularly note is the brilliant blending of impact-based thrashing during the verse segments and a denser layering of guitar harmonies during key transition points, culminating in a modern thrash epic that stands apart from the streamlined yet equally fierce presentation put forth by Havok recently. Similarly complex offerings such as the more grooving stomp-fest with frequent ballad-like passages “Begin Again” and the mid-paced, melodic and shred-happy crusher “Future Sight” follow suit by upping the ante in the originality department and showcasing just how versatile thrash can be when in the right hands. 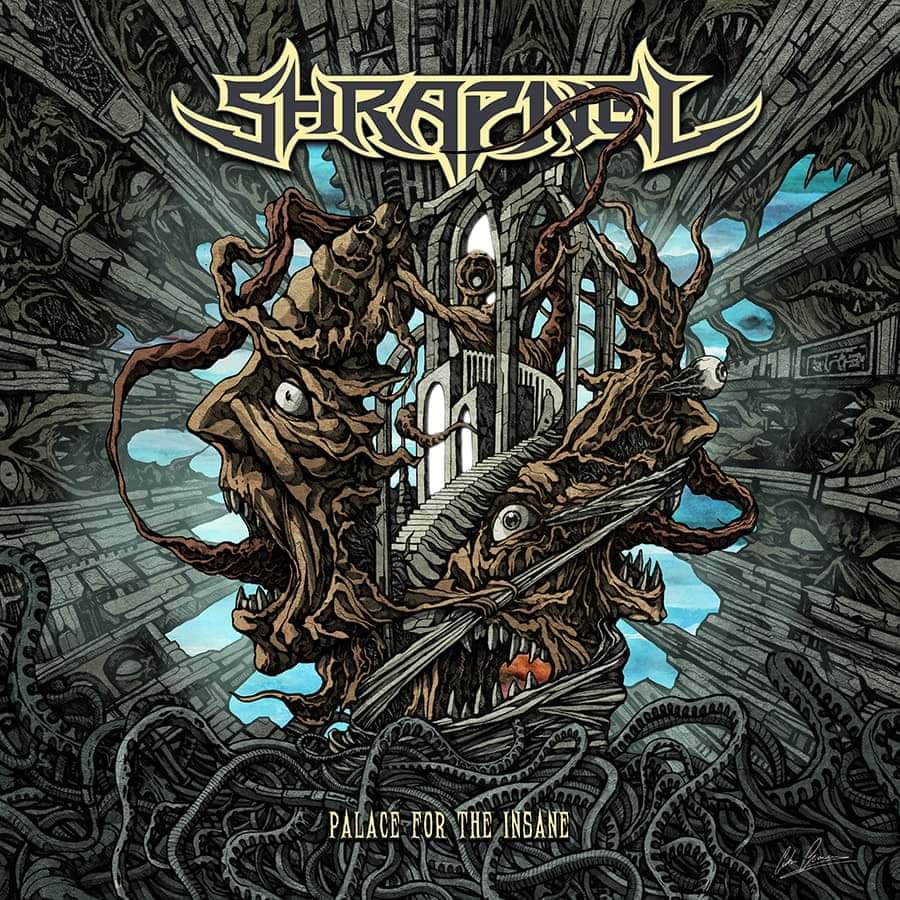 “Palace for the Insane” Album Artwork

Then again, a band of this persuasion doesn’t function solely to break the mold and repeatedly break the six minute mark with every song, and they make an equal strong showing in punching through the roof with some more conventional material. The formula that defines more streamlined beasts like “Cannibal” and “Turn Off The Lights” shares some level of complexity with their longer aforementioned cousins and tends a bit more towards a grooving character, but for the most part the shorter material on here cooks at full speed. High velocity monsters like “Bury Me Alive”, “Infernal Choir” and “The Mace” are prime cut for anyone looking to come out the pit looking like they’d stepped into a meat-grinder, often blurring the lines between standard thrash and death/thrash in a manner comparable to Kreator, and seeing lead guitarist Nathan Sadd tearing up the fret board in a manner that would make Gary Holt proud. In keeping with this, the album’s strongest offering is its most conventional one in closing cooker and title song “Palace For The Insane”, which pulls zero punches and delivers that late 80s Zetro-fronted Exodus goodness in all its high octane glory.

For the adrenaline junkies populating the present thrash craze, this delivers about as potent of a sonic fist to the face as the most recent outings of Warbringer and Havok, with a slightly greater affinity for the extreme metal musings of the former. It fully embraces the massive production character that has tended to dominate the recent outings of older affiliates to the style, cutting against the lower-fidelity and somewhat understated character that tended to define the overt retro-thrash bands that were ruling the roost in the 2000s. But more so than anything else, it appeals to every facet of the style and incorporates its many distinct features into one colossal package that more than justifies it’s longer than average length relative to its adopted style. Perhaps not for the faint of heart or the weak of vertebrae, but an album like this will have a harder time finding detractors than it will ardent supporters willing to turn the pit into a human blender once the entire band lands in the pocket.

“Palace For The Insane” Track-list:

An onslaught of total destruction, and yes, that pun is intended when considering the sheer brutality and technical flair that England’s most formidable New Wave of Thrash Metal export since Evile brings to the table on their third full length studio outing