Vicious is quite an understatement.

Endless debates could be had regarding what truly constitutes the furthest fringe of extreme metal, but there is a pretty solid case to be made that one contender would be the synthesis of sludge’s low-fi blend of extreme slowness and speed with that of the darker fringes of death metal. Though most tend to associate the Nola scene with the genesis of such a sound as heard from the likes of Soilent Green and Acid Bath during the early to mid 1990s, Seattle was arguably the style’s original stomping ground when consider the early accomplishments of Melvins. As such, a truly brutal blend of muddy, doom-infused goodness with a vile, New York Death Metal meets grindcore assault would be a fitting musical offering from the Pacific Northwest, and recent times have brought about a truly formidable, albeit still relatively obscure powerhouse in Seattle’s recently born triplets Rat King.

As the band’s name might suggest, they deal in a particularly nasty brand of sludge befitting the visual of a dozen or so rats being tangled at the tail to form a perfect circle in a sea of rancid garbage, and while their latest studio offering “Vicious Inhumanity” isn’t their debut offering, it has all the energy and fervor of a newly minted outfit ready to take on the world. No punches are pulled in their fairly original blend of early 90s sludge and stoner influences with a ferocious, high octane death metal assault reminiscent of where Immolation and Napalm Death were at around the same time, to the point where one wouldn’t be far off in musing as to whether this is a death/grind band that’s merely dabbling in the sludge aesthetic. In short, this isn’t your dad’s offshoot of Crowbar where the riffs are minimalist and the technical chops are largely held in store, but a full on blast of rage that could trade blows with that of the early godfathers of the New York sound. 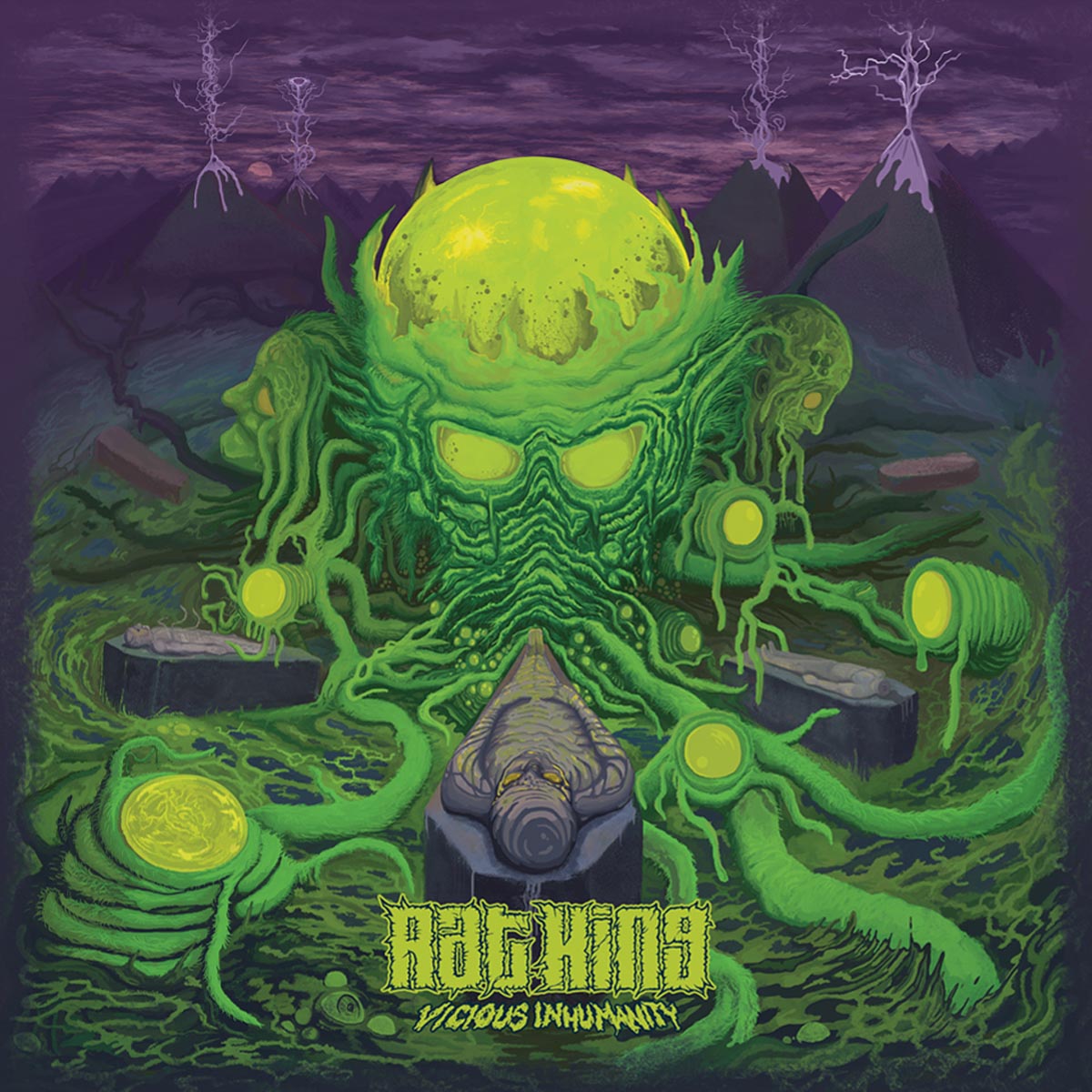 Curiously enough, despite this outfit’s tendency away from a traditional sludge sound, this album begins on a fairly conventional note. The opening anthem of murky hatred that is “Matanza” has a typical sense of dissonant slowness that might lead one to think this a slightly more jagged-edged answer to Crowbar’s vintage sound, but this proves to be something of a deceptive overture to what becomes a blasting fit of chaotic madness that could trade blows with Morbid Angel. This comparison actually goes beyond the speed and intensity factor, as guitarist/vocalist Ricardo Racines’ comes off almost like sludge’s answer to Trey Azagthoth, particularly during some of the wilder sounding shred fests that he offers up during the guitar solo segments of “Soledad” and “Zero”, each song in question itself being a fairly impressive display of splitting the difference between hyper-thrashing riff work and a dreary, muddled presentation fit for the bayou.

Naturally it isn’t all warp speed, all the time with this album, as this band does show some very clear signs of understanding their Nola influences. In similar fashion to the more toned down and dissonant intro that kicked this album off, the opening segment of “In Quiet Sleep” has a very strong stoner/doom air to it, almost to the point of resembling early Electric Wizard with maybe a dash of melodic melancholy. This proves to be a nice, multifaceted song that displays this band’s dual sludge and death traits a bit more evenly, and eventually gives way to some more frenzied moments. Likewise, the dreary melodic onset of closing number “Rotting From Inside” has a slight psychedelic tinge to it that somehow manages to avoid clashing with the morose swamp of death going on beneath it. To be sure, there are no truly pretty moments to be found on these songs, but occasionally one can pick out a guitar melody here or there that comes off as ironically consonant.

Though there has been a fairly long period of quiet among many of the Nola alumni of late, there is definitely an ongoing tsunami of swampy goodness rolling out of the former land of Soundgarden and Nirvana, and it isn’t limited to the massive output by Buzz Osborne and his fellow Melvins. Alongside Oregon’s Lord Dying, Georgia’s Black Tusk and Maryland’s Musket Hawk, Rat King represents a young generation of diverse sludge adherents that have faithful taken the format of the old guard of 25 years prior and expanded upon it quite aptly. This batch of muck-covered rodents definitely take their party to a garbage dump that emphasizes the stench of death as much as it does the inorganic waste that often comes along for the ride, and any metal head turned dumpster divers with an eye for something with a bit more technical flair and vintage death metal flavoring will find a solid entrée here.

The grunge craze may have come and gone, but Seattle continues to deliver a truly unique blend of northwestern sludge, this time in the form of a ferocious beast of a trio that blurs the lines between the old Nola sound and NYDM-styled brutality