Have you ever wondered what a band sounds like with no original members? Wonder no more; may it please the court, we present Exhibit A, “Quiet Riot.” In fairness, the newest revival of the Quiet Riot brand, the November 8 album “Hollywood Cowboys” is brought to us by drummer Frankie Banali from the pinnacle “Metal Health” period of the band. However, so much of the heart and soul of Quiet Riot has always been found with front-man Kevin DuBrow, the bass chameleon Rudy Sarzo, guitarist Carlos Cavazo, and most especially the band’s founder, Sunset Strip Superman Randy Rhoads. Their absence leaves a gaping hole which, sadly, will probably never be filled.

To bring us this latest offering, Banali enlisted the support of Alex Grossi on guitars, Chuck Wright on bass, and notably the lead vocals of American Idol alumnus James Durbin.  Grossi and Wright bring a modicum of gravitas via their time on previous lesser-grossing Quiet Riot albums. The album, while not bad, does not quite seem to know what it wishes to be. Just in the last couple years we have seen both giants of old, and new kids on the block (lowercase, thankfully), revive AOR and melodic hard rock standards in an authentic and nostalgia-evoking way. We have also seen acts of old learn to mature their sound gracefully, in cases like Kip Winger or the fresh solo album from Motörhead’s Phil Campbell. Unfortunately, Quiet Riot in its current form does not really accomplish either. After listening to “Hollywood Cowboys,” we went and dusted off “Metal Health,” “Condition Critical,” and even the beloved material from the Randy Rhoads years, and there is really no comparison. Almost no one outside the Frankie Banali fan club could listen to the new album blindfolded and identify it as being Quiet Riot. We can forgive that, but again, the album also fails to age gracefully and sonically into something which can be taken seriously. The album evokes that 1994 metal band feeling from when arena metal acts were imploding without any sense of direction in this crazy new world. Many of those bands perished for good, or adapted into something better, but this album with a Quiet Riot logo finds itself stuck in that creative quagmire of 25 years past. 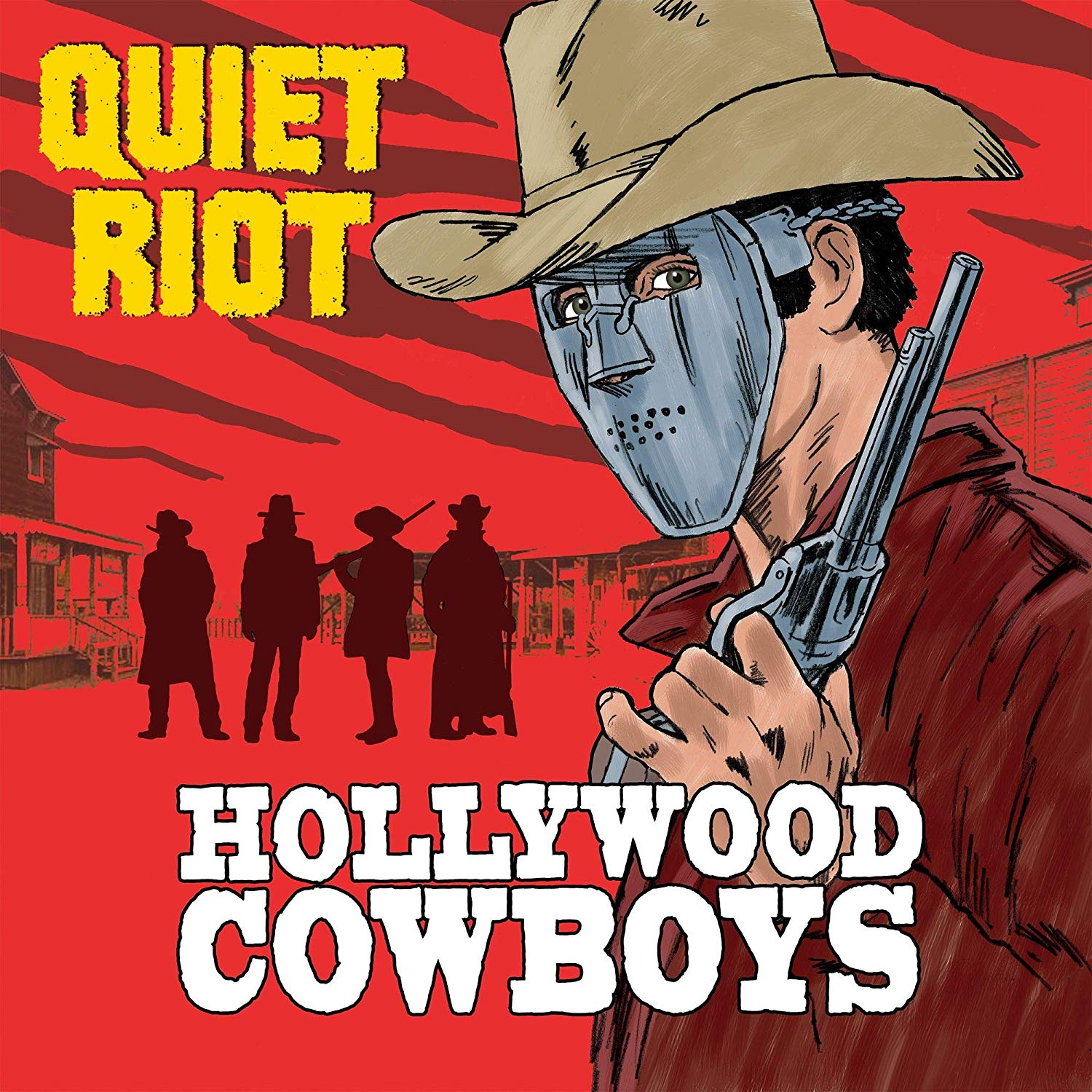 To answer any questions about the vocal sound of Quiet Riot in an unfortunately sans-DuBrow world, it is just a little odd. Not bad or wrong, just… not quite what the sound needs. It’s an upper-midrange grit, but without the perceptible diaphragm power of a DuBrow, a Dio or a Winger. It’s more of Janis Joplin trying to imitate Vince Neil while having an irritable day.

So let’s wrap it up like this. Suppose you are going to see Bon Jovi, and they have a damned good supporting act you have never heard of. Maybe not the best thing you ever heard, but on the way back from the restroom and the beer stand, you spot the band selling $5 CD’s at the merch table and you snag one, because you enjoy some straight up rock and the singer gave you a fist bump. This album is that $5 first album by that unknown band you listen to driving home from the concert. It’s cool, but it is really not Quiet Riot. We also want to take a moment to acknowledge Frankie’s battle with stage IV cancer, and we at Sonic Perspectives wish him and his family all the very best. While it is uncertain whether it is prudent to further devalue the Quiet Riot currency, we love Frankie and his musicianship, and we hope to hear him on many more albums and tours in the years to come.

When reviewing the heavyweight veteran acts of rock, we may sometimes form a recommendation based on whether you are a hardcore fan of the band. In some cases, an album may be mandatory for the established fans, and optional for those new to a given artist. In this case, this album bears so little resemblance to archetypical Quiet Riot that it poses some challenge in finding a niche market. We have all the classic QR records on our shelves, and unfortunately the new album demonstrates little replay value, at least after a few listens. It may grab some traditionalists, so check out the samples online, and let us know your thoughts on Facebook, Twitter, or your social media hangout of choice