When seeking a poster child for the successful transformation of stylistic identity, one needs look no further than Pyogenesis. Formed in 1989 as a doom and death metal band, the new millennia saw Pyogenesis reborn as an alternative rock act that never quite lost the melancholy that defined their early work. Though the shift was not without its criticism, a hiatus that spanned from 2005 to 2014 was the setup for an ambitious three-album steampunk concept project that leaned wholeheartedly into the band’s extreme metal roots. The final chapter to the trilogy was released in early 2020, an album titled “A Silent Soul Screams Loud,” an opus which exudes electrifying artistic vision, ambitious pursuit of creative ideals, and unparalleled youthful energy. Pyogenesis shows their maturity in a near-flawless balance of speed, emotional inflection, and unbridled enthusiasm in an album which holds an impressively captivating aura even under close scrutiny. Capturing the strengths from each era of their evolution, “A Silent Soul Screams Loud” is an emotional plea to the deepest foundations of man, one which has the power to stay with listeners long after the closing notes.

Dedication to the completion of a full conceptual trilogy is just the tip of the iceberg when it comes to the creative power of Pyogenesis in their current form. Leading the charge is founding member and vocalist Flo V Schwarz, the mastermind behind laying furiously biting electric guitar and thundering drums overlaid on pop-rock song structures. “A Silent Soul Screams Loud” comes across with structural familiarity, and a style that leans well into the enthusiasm of modern alternative music. But where the album truly stands out is the emotional depth that shines through in hard-hitting chords and lamenting choruses, spurred by the powerful drumming that wouldn’t be out of place on a heavy metal album. This is all done while remaining true to the trilogy’s concept, which focuses on the societal changes which occurred in the 19th century. “A Silent Soul Screams Loud” draws on themes from Napoleon’s reign, Bohemia, Sigmund Freud, and even Karl Marx. These shine within a greater lens from the trilogy which marks “A Silent Soul Screams Loud” with the element of water, where the two prior albums represented air and earth, respectively.

There is no point where “A Silent Soul Screams Loud” pulls its punches. This is an album which is unapologetically loud and fast, a characteristic which begins from the very opening track “Survival of the Fittest.” Offering an opening hook that digs in with well-timed bass, listeners are drawn further in with each passing moment until the fury of Jan Räthje’s drums descend in time with Schwarz’s vocals. Verses are delivered with lightning speed, while the chorus backs off slightly to allow the melody of electric guitars to meld with Schwarz’s unique pitch. The ebb and flow of “Survival of the Fittest” comes off in the vein of pop-rock but boasts a crescendo of percussion and hollered vocals that could best a number of metal bands in their intensity. A similar balance is struck in “High Old Times,” though the latter track digs its heels into the melodic comfort of classic rock and takes advantage of Schwarz’s vocal maturity. 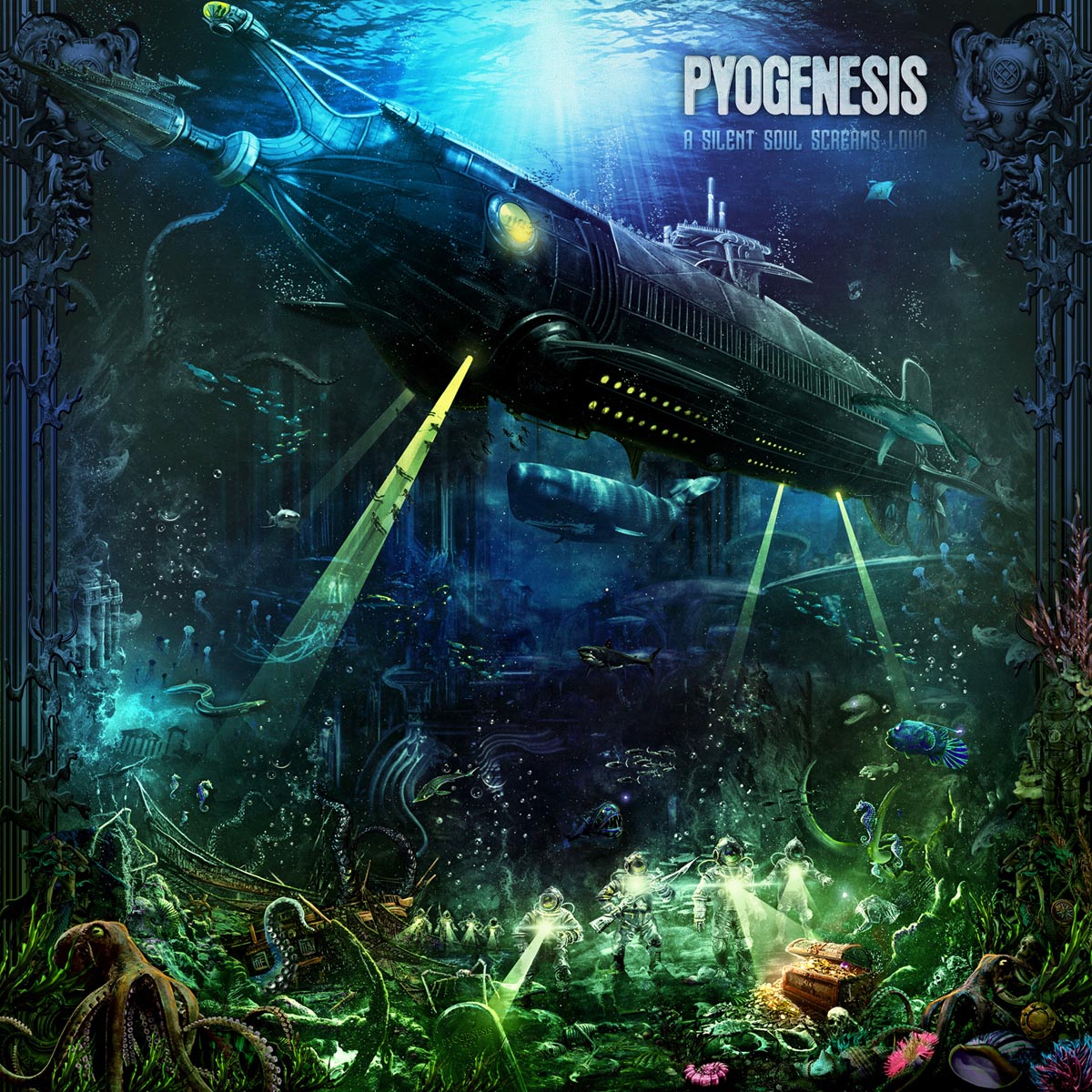 The characteristic which gives “A Silent Soul Screams Loud” such success is found in the well-timed songwriting that gives each track its unique identity and a strong place in the album as a whole. Pyogenesis have crafted themselves as expert storytellers, a title that is well-deserved given the progression of the message within and across each track. “Mother Bohemia” draws its fair share of style from pure heavy metal in terms of its speed and percussion, but it finds an organic segue into slower and more somber moments that echo the band’s doom roots. Sixth track “Modern Prometheus” is a mellow and mournful soundscape which captures yet another vocal dimension with guest vocalist Chris Harms (Lord of the Lost). Schwarz and Harms balance their roles in perfect harmony, with the varying vocal layers playing out over the album’s slowest track with a blissful peace. The gradual speed mounting in following track “Will I Ever Feel the Same” is the perfect incremental increase in intensity, one which builds to the prior speed and energy that “Modern Prometheus” had extinguished in its  tempered agony.

When it comes to depth and dimension, there is no track more stunning than the almost 15 minute closing epic “The Capital (A Silent Soul Screams Loud).” Telling its tale in three passages, Schwarz captures not just pleading anguish with his soulful voice, but showcases the capable musicianship of Pyogenesis in lengthy instrumental passages. “A Silent Soul Screams Loud” is primarily led by vocals and percussion, but “The Capital” permits guitars to take center stage for beautiful transitions from electric to acoustic and back again. A shimmering backdrop of Schwarz’s keyboard gives “The Capital” a haunting allure in its opening, this initial passage proceeding almost like a hymn. Across the song the inflection gradually swells to a roaring battle cry, one which never loses a hint of torment in its full-bodied magnitude. The sync between Thilo Schmidt’s guitar and Rathje’s drums are best showcased in this closing, the two crafting the dynamic backdrop on which Schwarz pleads his heart out. This track also features the most soulful solos in the entire album, finally giving the talented instrumentalists behind the guitars and bass to have their moment in the spotlight.

From its opening notes to its closing knell, “A Silent Soul Screams Loud” proves itself to be not just a masterpiece of thoughtful composition, but an emotionally inquisitive adventure through the human spirit. The same melancholy which defined the band’s founding footsteps in doom metal created this album’s backbone, alongside the extremity of death metal’s mighty punch. Pyogenesis have shown themselves to be the pure demonstration of an artist evolving their creative scope while still retaining the elements which best defined their experience. The pure emotion which Schwarz embodies with his voice is entirely unmatched, and one which carries this album from simply brilliant to extraordinary.  “A Silent Soul Screams Loud” is a stunning close to a trilogy that spans almost three full hours of music, and one that pursues the intricacies of human emotion in waves of unquelled excitement. With utter command over emotion and atmosphere, “A Silent Soul Screams Loud” is an album that should not be missed by fans of metal, rock, or alternative alike.

An epic tale of humanity told through the lens of a steampunk conceptual album, the emotional depth and intensity of “A Silent Soul Screams Loud” comes close to unmatched. Performed by powerful musicians still at the top of their game, the maturity and perspective that Pyogenesis bring to their latest opus should rightfully turn heads to this engaging and accessible work of art.