The birth of PHIL CAMPBELL AND THE BASTARD SONS – featuring MOTÖRHEAD guitarist Phil Campbell alongside his sons Todd, Dane and Tyla (also a member of the criminally underrated THE PEOPLE THE POET), plus vocalist Neil Starr – was at the legendary Wacken Festival in Germany, August 2016. Since then, the band have released a self-titled EP, played many shows and festivals around Europe and have completed 2 separate tours with SAXON throughout November/December 2016 and GUNS N’ ROSES in June 2017 where the band performed in front of hundreds of thousands of fans in some of the largest stadiums in Europe.

Alongside some other appearances at Hellfest, Sweden Rock, Download Spain and others, the band spent the remainder of summer 2017 recording their debut album. Titled “The Age Of Absurdity”, the album was recorded at Rockfield Studios and Longwave Studios in Wales and produced, engineered, and mixed by Romesh Dodangoda. The record was then passed over to the acclaimed Abbey Road Studios in London for mastering. 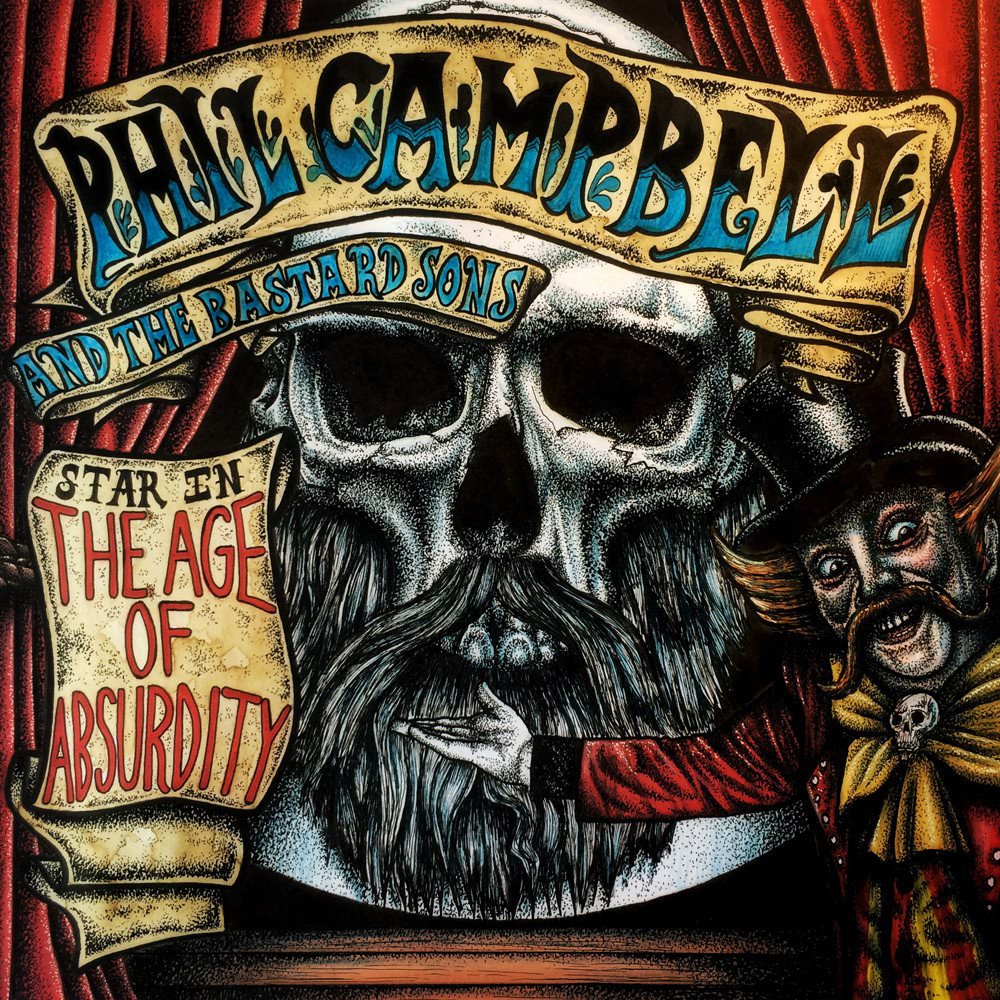 “The Age Of Absurdity” Album Artwork

The album opening salvo “Ringleader” sets thing into motion with a hard-hitting, loud speed-metal flavor in a typical Motörhead fashion, wandering off course slightly with a lead riff that nods to AC/DC to later return driven by Starr’s aggressive, throaty vocals and a blistering solo by Campbell. “Freak Show” follows suit blasting a heavy groove rhythm with almost a dance feel to it, proving you can write a four-minutes song with equal parts of screaming solos, Thin Lizzy esque magnificent and catchy melodies and a shitload of swagger, and make it sound like a radio hit on top: an emblematic hard-rock masterclass. “Skin And Bones” is sleazy rocker flooded with hooks, a raw attitude and archetypical thrash-metal drumming lines: think some sort of a cleaner version of Motörhead packing as much energy as the legends did back in the days, with a more classic metal overall production, sprinkled by Campbell’s emblematic solos and the gritty yet sensational voice of Neil Starr.

The band just sounds tight, menacing and energized, like a pack of ravening wolves running down their prey: you’ve got a furious and rumbling attack driven by a crushing break-neck bass tempo in “Gypsy Kiss”; a chock-full of electric-power-drill-esque riffage in “Welcome to Hell”; a slower, harmonica-laden and drenched in in the atmosphere of rainy nights and dimly-lit bars track in “Dark Days” and even a more genteel and bluesy semi-ballad in the closing “Into The Dark”, which despite the slower rhythm never loses the rock n‘ roll direction.

“The Age Of Absurdity” is a great record to listen to when you need to pack your day with some high-octane energy. Fueled by driving bass-lines, fast paced rock beats, rockin’ guitar riffs and liquid soloing, there is speed, there is melody, there is emotion: there  is Hard Rock, with capital letters,  and plenty of it.

“The Age Of Absurdity” track-listing: