When it comes to the history of YES, one could say Peter Banks is the overlooked bloke. A founding member and the gent who came up with the group’s name, he was one of very few participants who only had one stint in the band’s line-up, partially due to the band’s revolving door membership. Post YES, Peter formed Flash and went on to success. Several line-ups of Empire followed but various incidents and misfortunes meant their recorded work was not released in full. Peter sadly passed away in 2013, and now the Peter Banks Estate has begun working to get his back catalogue restored to its rightful place, releasing these albums during the 5th anniversary of his passing and the 50th Anniversary of YES. 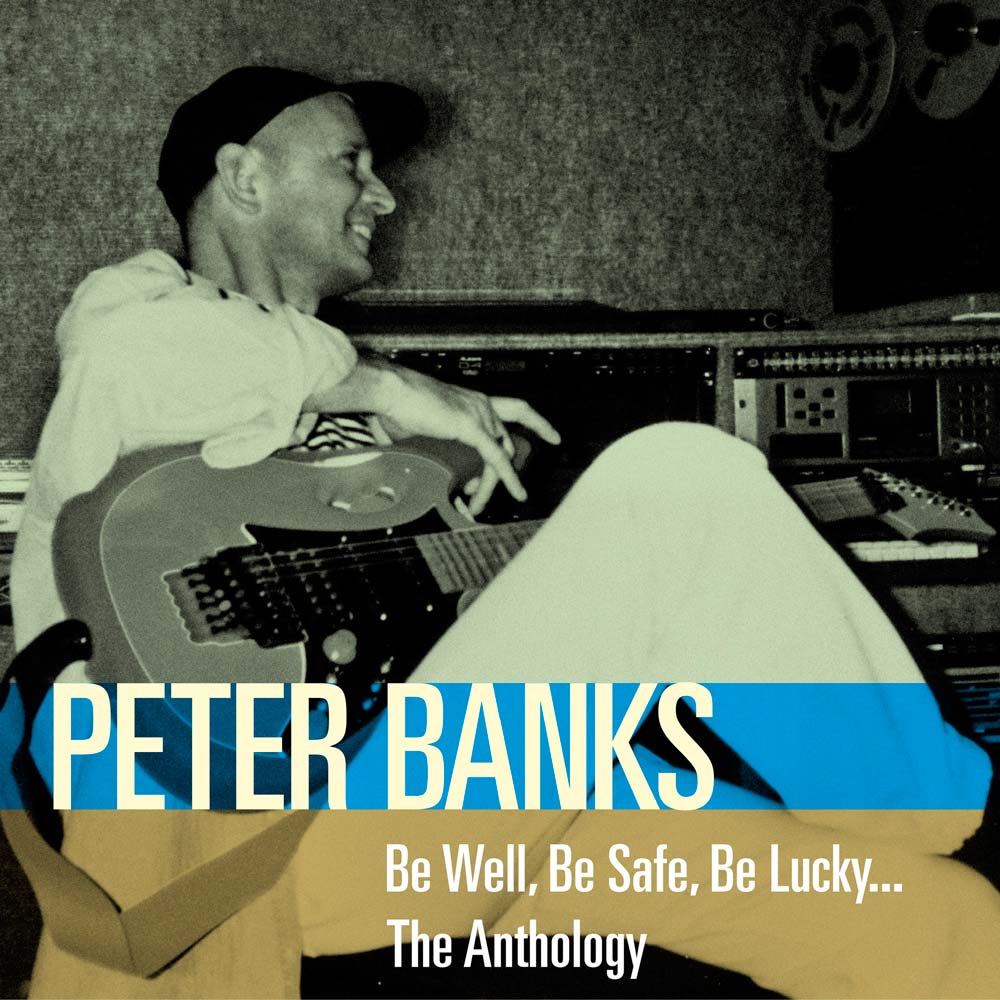 “Be Well, Be Safe, Be Lucky… The Anthology” Album Cover

“Be Well, Be Safe, Be Lucky…” is one of Bank’s sign offs with autographs and is now the title of the first ever compilation of Peter Banks career. The set encompasses two discs, the first of which is “The Best of Peter Banks”. The disc kicks off with a trio of tracks from 1994’s “Instinct”. The gentle, pastoral “No Place like Home” leads into the more techno influenced “All Points South”, followed by atmospheric “Fogbound”. Remember that at the time of this album’s original release, it had been more than 20 years since Banks had released a solo album and a lot of the work he had done in-between had not either been released or unheralded. I remember the delight of many fans at the time to hear that Peter was still an active, creative artist, taking on new challenges and demonstrating he still had the chops. 1997’s “The Age of Distortion” takes the techno/guitar combination even further, and is interesting that it sounds very similar to music that Jeff Beck began to make in a similar vein many years later. Five tracks from the “Reduction” album from which it is taken are here, including the acoustic styled “Fade To Blue”, the shred-filled “Tone Down” (check out the harmonizer section where Banks could have been influenced by, perhaps, some of Trevor Rabin’s work???) and the funky “Dirty Little Secret”.

1995’s “Self Contained”, one of Banks’ hardest to get albums until now, contributes four tracks to this compilation, and at times sounds like the most experimental of the three 90s records he released. That album originally featured an eight-track suite named “It’s All Greek to me”, and two of those movements are included here, with the first disc closing with another softer track, “Lost Days”. Slotted between these selections are two tracks from the 1973 album “Two Sides of Peter Banks”. While his albums in the nineties featured a cast of “unknown” musicians, Peter’s first solo release was a star studded affair, including the contributions of subsequently prog-rock luminaries like John Wetton, Steve Hackett and Phil Collins in “Knights (Reprise)” former Flash band-mates Ray Bennett and Mike Hough on “Knights”.

For guitar enthusiasts out-there, the first disc is a great introduction to what Peter was capable of, and the chronicle continues with “Can I Play You Something More?” the second disc of the set, featuring numerous rarities, (including two previously unreleased extended tracks) collected together from 7 different sources… a ‘catch all’ of Peter Banks tracks that fans may not have heard before. Released in 1999 “Can I Play You Something” included – for the first time on CD –tracks from two of YES precursor bands: Mabel Greer’s Toy Shop – an English progressive/psychedelic rock band formed in London and active from 1966 to 1968 – and The Syn, a band that was active from 1965 to 1967. With some of those tracks tied-up with contractual issues, this second CD includes the rest of the original track-list, and adds variety of rarer tracks from Peter’s career. It begins with the same three cuts as the original, ending with a live version of the “Peter Gunn theme” with some great guitar and sax. Two of the oddest tracks on here are instrumentals from a 1976 album called “Guitar Workshop Volume Two”. If they sounds slightly Crimson-esque, that may be due to the presence of King Crimson drummer, Andy McCullough – but both are incredible guitar workouts, showing Peter’s YES/ Flash era guitar style, but with a lot of light and shade, and they feel like improvisational stretch outs.

What is great about this album set is that, while not containing any YES or Flash tracks, it does contain several homages or touch points with both bands. I have already mentioned Bennet and Hough of Flash feature, as do two versions of Flash’s “Small Beginnings”. Both come from a collaboration with keyboard player Gerard Johnston whose only release until now was with deluxe copies of Billy James and Peter Banks’s book “Beyond And Before – The Formative Years of Yes”. The first is a 3-minute version – the second an extended workout of almost 20 minutes length, structured into many sections and styles like a true prog-rock masterpiece. There is a lot to digest in that piece, but it is a great testament to Peter’s ingenuity and stylings in a single piece. His work with YES also gets touched upon with the inclusion of the fantastic cover version of “Astral Traveller” from the “Tales from Yesterday” tribute album – I can vividly remember feeling surprised and delighted at the same time when I initially heard that version back in the day. That distinctive slashing intro leads into Banks tackling the song in a very different way as an instrumental. Robert Berry provides the instrumental backing, with Banks adding his 1990s style guitar to the track, as well as slipping into some sections very clearly referencing his 1960s playing style

Intriguing to fans of the current YES line up was the announcement that the album would contain a song called “Knights (Revisited)” which featured current YES members Billy Sherwood and Jay Schellen, along with founder member of YES and Flash, Tony Kaye. The track itself is built around an unfinished guitar part and is quite brief – but it is a nice addition to the set and there is a sense of the Wheel of Yes turning full circle with this collaboration. Also noteworthy  is the inclusion in the booklet of an original poem by Bill Ward of Black Sabbath. 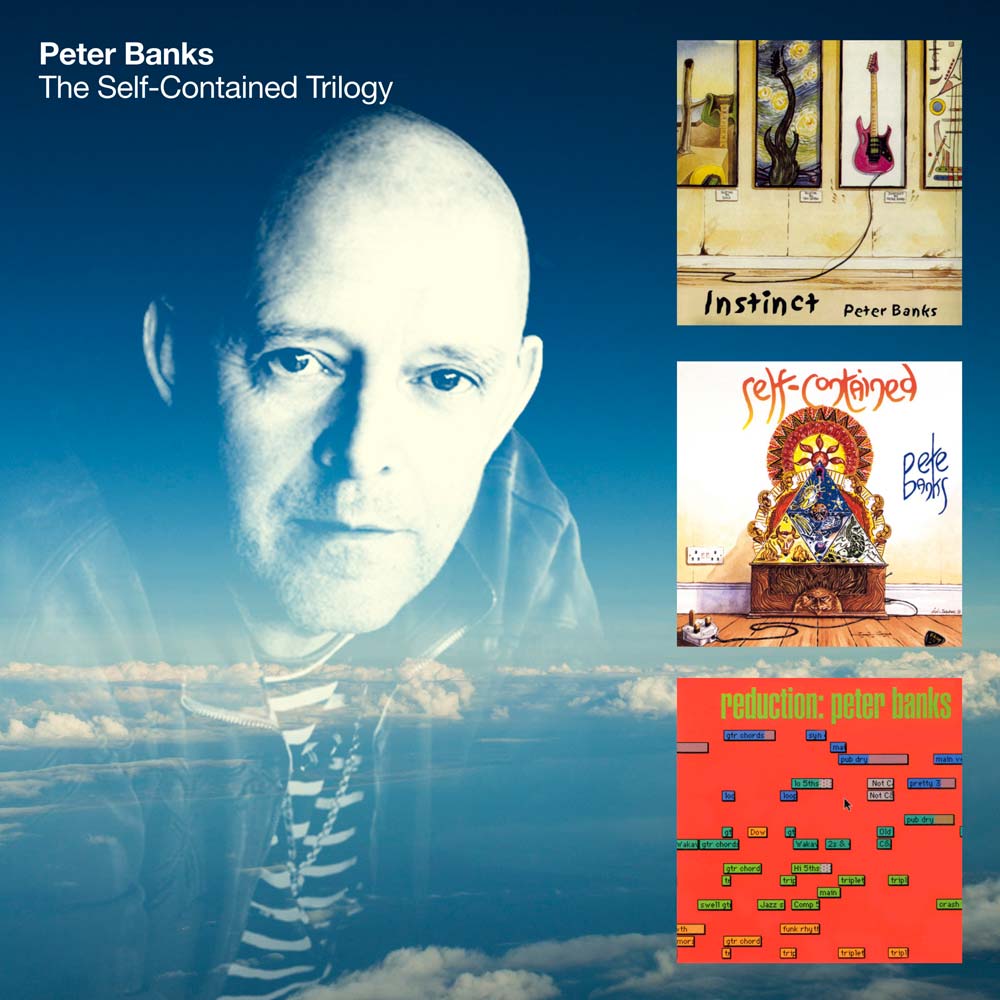 For anyone who has not explored Banks’ playing outside of YES and Flash, this first set is a great place to start. Those of you who liked it, and want to continue the journey, can dive headfirst into his 90s albums as a whole with “The Self Contained Trilogy”. This set, as well as featuring new artwork and sleeve notes has a fresh remaster of “Instinct”, “Self-Contained” and “Reduction”. These albums previously commanded a high price online due to their scarcity so it’s great to have them given a fresh coat of paint and available once again. As I mentioned earlier, variety is the name of the game in these records… you will hear a wide range of guitar styles and creativity, smooth jazz, Vai-like shredding, lyrical and melodic, or atonal and distorted – Peter ably demonstrates he was not a one trick pony.

Guitarist Fernando Perdomo recently released an all-instrumental progressive-rock album entitled “Out to Sea”, which kicked off with a tribute track to Banks called “The Architect”. Sadly, Peter Banks never received the kudos for his innovation in rock guitar in the same way that Hackett, Gilmour, Ackerman, Howe or Barre did. British writer and DJ Danny Baker referred to Banks as “The Architect of Progressive Rock”, which is where Perdomo got the title for his homage song.  Listening back, he clearly was one of the architects of those styles, and both of these sets show that the breadth of his capability equaled those aforementioned. Now we have a chance to reacquaint ourselves with his music and I would highly recommend that any YES, Flash or guitar fans in general to do just that.

I certainly hope that Banks Estate will continue with this excellent series of releases – see also “Empire featuring Peter Banks and Sydney Foxx – Complete Recordings” for the complete recordings of Banks’ band of the late 1970s/ early 1980s.

Be Well, Be Safe, Be Lucky… The Anthology (Can be pre-ordered here)

DISC ONE: THE BEST OF PETER BANKS

DISC TWO: CAN I PLAY YOU SOMETHING MORE?

The Self Contained Trilogy (Can be pre-ordered here)