Not to boast, but I hopped on the Nightwish train pretty early on. I’ve owned my first-run vinyl LPs of “Oceanborn” and “Angels Fall First” for over twenty years, was a first-day buyer for the next several Nightwish releases, and was both weirded out and excited when American rock radio picked up “Nemo” back in 2004. Sadly, I never got to see them while original singer Tarja Turunen was still fronting them, and as much as I liked Anette Olzon and love Floor Jansen, their decision to focus their set-lists on more recent output has left me feeling a  little cold every time I’ve seen them, despite their excellence on stage.

That’s exactly why their “Decades” tour in the Spring of 2018 made me salivate. Not only were they performing at American venues worthy of their stage shows, they’d decided to dust off many forgotten classics that Stateside audiences had never heard performed live. And Nightwish decided did not hold back. At all. Digging out cuts both deep and old alone wouldn’t suffice, though. Apart from the minor rearrangements songs like “Elvenpath” and “Amaranth” got,  re-recorded spoken and orchestral parts from the first two, lower budget albums help bring ass-kickers like “Gethsemane” (the song that made me a Nightwish fan in the first place) into the modern day, and are graciously more audible than they were at the Dallas stop of the tour.

This simple tweak might have won me over on its own, but bandleader Tuomas Holopainen was apparently intent on impressing me personally by doing the unthinkable: easing Nightwish‘s infamous reliance on backing tracks.

Srsly tho, why wouldn’t they? In Troy Donockley, Nightwish has gained not only a master piper, but a skilled multi-instrumentalist who spent fourteen years as a member of the Celtic rock band Iona and who was a professional musician while the rest of Nightwish were still going through puberty. And not only does he transport you to the misty hills of 18th century Northumbria with his pipes and shred on any stringed instrument you throw at him, the dude ain’t a bad singer either. Troy‘s updates to the Nightwish of yore range from the subtle (pipes on “Sacrament of Wilderness,” “Come Cover Me,” and “Nemo,”  harmony guitars on “Deep Silent Complete”) to the barefaced, like his taking complete ownership of “The Carpenter,” where the acoustic guitar and lead vocal are all his.

Incidentally, Holopainen, Donockley, and crew deserve props for including not one but two Christian-themed songs – one of which is sung by a former member of a Christian rock band – on this set-list. It wasn’t that long ago that Nightwish dedicated nearly an entire album to science and reason, composing several songs and a freaking twenty-minute epic to honor the work of Charles Darwin. They even saw fit to ask Richard freaking Dawkins himself to read from both Darwin’s work and his own on an album whose artwork prominently features a double helix.  To drive the point home, Troy and Tuomas even went so far as to participate in the Center for Inquiry’s “Openly Secular” campaign in the months leading up to the album’s release, a move that gently but firmly marked the end of both Troy‘s and Nightwish‘s adherence to Christianity. Performing material that celebrates their former religious leanings is a bold and mature move that embraces the group’s past as it bids it farewell, and serves as a well-deserved but loving assault on the myth that atheists are a bitter group of hateful wankers.

But yeah, back to the singing.  Holopainen has proven himself over the course of Nightwish‘s entire career to be a skilled composer whose well has somehow not yet run dry, but he is also wise enough to let the people who bring his music to life take the spotlight. Strictly committed to excellence and expecting nothing short of it from his band-mates, what Holopainen has assembled with the current lineup of Nightwish is without question the finest ensemble ever to bear the name. Longtime bassist Marco Hietala, for instance, is as menacing as ever, commanding both stage and audience like a Nordic David Allen Coe. Hietala‘s menacious sneer becomes the consummate “devil” in “The Devil and the Deep Dark Ocean,” replacing the frankly embarrassing over-processed contributions of Tapio Wilska on “Oceanborn.” If Donockley makes “The Carpenter” his own, Hietala bloody well conquers “The Devil and the Deep Dark Ocean.” And mind you, that’s Floor fucking Jansen he’s dueting with. If this interplay isn’t enough to overshadow the presence of backing tracks on this performance, perhaps you’d be won over by the fact that they’re of new orchestral parts the band couldn’t yet afford when this song was originally recorded. I was. 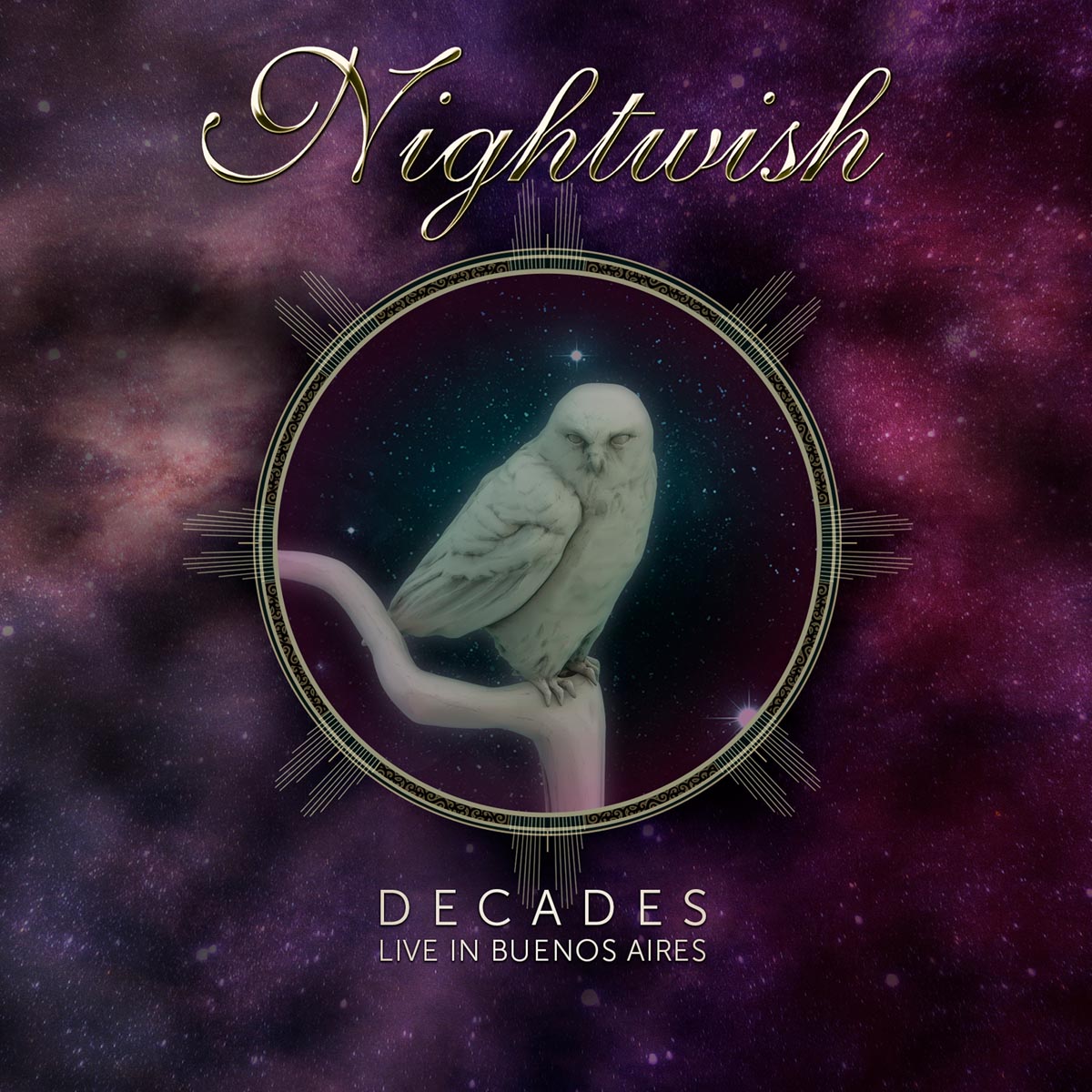 But back to Ms Jansen. Ms Jansen has unarguably succeeded in making those old Tarja-era tunes her own – just watch her absolutely mesmerizing Wacken 2013 performance of “Ghost Love Score” if you doubt me even a little. She knows what she can do. Ms Jansen also knows when not to do it. Throughout “Decades: Live in Buenos Aires,” she wisely exhibits the same restraint she shows in her rendition of the Lady Gaga song “Shallow” on the Dutch program Beste Zangers, and it is that very restraint that indicates the sovereignty she wields over that celestial voice of hers. The mark of mastery is not simply being able to do something well, it’s knowing when to do what for maximal effect in service of the song. Ms Jansen exhibits her maturity as both a person and a performer by honoring Turunen‘s formal approach without overdoing the operatic shtick, effortlessly weaving between Tarja‘s classical realm, Olzon‘s poppier approach, and her own metallic aggression with the grace and fluidity of a fucking goddess. She knows when to hold back and when to go full throttle, when to whisper and when to wail. I knew it when I first saw her perform with them, and everything she has done with them since confirms it: with Ms Jansen, Nightwish have at last found their singer.

But have they really, you ask? I’ll put it to you this way: If Troy makes “The Carpenter” his own, and if Marco conquers “Devil and the Deep Dark Ocean,” then Floor takes complete fucking dominion over everything she does for this band, not only carrying songs that had previously been Tarja and Anette‘s, but elevating them to heights neither you nor they thought possible. And when Ms Jansen fully engages with Manic Marco, sparks fly and heads fucking roll. Put bluntly, Floor and Marco rip “The Kinslayer” a new asshole, Floor‘s classical singing exceeding Tarja‘s own veritable performance on the original, while Marco‘s snarly portrayal of the Columbine shooters somehow proving more balefully seductive  than even Ike Vil‘s was. And again, Ms Jansen knows when to lay off the operatic stuff: she wisely puts her head voice away and puts that incredible rock voice to excellent use on the rest of the song, culminating as she gets “drunk with the blood of your victims” near song’s end. Vastly superior to the performance on the “From Wishes to Eternity” DVD, where an otherwise flawless trek was marred by the piped-in, disembodied voices of both Vil and Tarja‘s own harmony vocal as well as by the band’s fabled use of still more backing tracks, this interpretation of “The Kinslayer” is the revision you never knew you needed in your life.

One could argue that “Decades: Live in Buenos Aires” is a superfluous release, as the previous live video, “Vehicle of Spirit,” isn’t old enough to have started kindergarten. These arguments are stupid. Apart from the obvious choice to dig deeper into the Nightwish repertoire and tweak things up a bit, Floor feels more comfortable in her role, taking more liberties and even occasionally distorting her voice to give it some charismatic rage that both of her predecessors lacked. She honors older material by not always singing operatically when Tarja would have, giving the songs added dimension, gravity, and just a touch of organic grit to remind us that this is still rock n roll. Her treatments of “Sacrament of Wilderness” and “End of All Hope” merit accolades for creating unseen dimensions on the former, and for rescuing what sometimes felt unbearable on the latter. I vividly recall “Deep Silent Complete,” which I don’t believe had been performed since the “Wishmaster” tour,  sending the first of many chills down my spine at that Dallas concert, and with Troy‘s aforementioned harmonies and Floor‘s poppy, Olzon-inspired take, it sounds incredible here. (Also, Floor and Marco learned their lesson from that legendary Wacken performance and kept their stupid stage banter to a minimum this time around. They’re gifted performers, but comedians they ain’t.)

All this culminates in the final two cuts of this album, which happen to be my two favorite songs in the entire Nightwish catalog. I was fortunate enough to experience “The Greatest Show on Earth” not once, but twice, and through this set, I get to relive those performances at will. I’ll be damned if Ms Jansen doesn’t make “Ghost Love Score” hers all over again, as if there were any doubt after that “Showtime, Storytime” rendition I keep referencing. However, Floor deploys her classical chops this time, and the backing choirs are brought back in after being mostly absent from “Showtime” DVD.  Why was this done? We can only speculate, but my suspicion is that her decision to not sing this classic in the operatic style when she first joined the band was her way of asserting her own identity into this band, firmly establishing herself as “Floor Jansen of Nightwish” rather than “the new gal.” Now that she’s been so warmly embraced into her role, she’s free to reinterpret old favorites as those old favorites dictate. There’s that maturity again.

And while we’re on the topic of maturity, was Nightwish‘s decision to record this wonderful concert in Buenos Aires a passive-aggressive jab at Tarja, who lived there for over fifteen years and only recently left for Andalusia? I dunno, but any metal band who performs anywhere in Latin American knows that Latin American metalheads are fucking lunatics, and they will make their lunacy known, whether there are cameras around or not.

I still miss Jukka though.

The songs on “Decades: Live in Buenos Aires” are not merely performed, they are given new life. The various tweaks many of the songs receive and the reduced dependency on backing tracks makes for a fresher, more organic sound that sadly lacks in much metal these days. Wisely choosing to record in Latin America, a region that absolutely adores metal, Nightwish joins the ranks of Metallica, Megadeth, Dream Theater, Iron Maiden, and Therion in releasing live material performed for a reliably lively audience. The energy exchanged from performer to audience is palpable even through your cheapo earbuds, and rests the case that Nightwish is not only one of the finest bands of its generation, but deserves a spot in the great Metal Pantheon. This live set faithfully documents one of the most incredible concert tours I've had the privilege of photographing, and deserves the ears of even the most disenchanted fans. Rank this one up there with “Live After Death.”