If one pays enough attention to social media in the progressive rock world these days, they might see a sort of civil war rumbling beneath the surface.  Nothing as overt as, say, Steve Rogers’ and Tony Stark’s civil war, but it’s definitely there.  It’s a war of decades within a sub-genre that is already quite exclusive.  There are those who are staunchly opposed to newer bands in the genre playing anything other than music firmly rooted in the ’70s art rock movement.  Then there are those who are more Laissez-faire in their attitude to how progressive music should progress, thinking anything can and should go in music continuing to push boundaries of rock or metal.  There are some who are right in both camps, and some who are wrong.  Unfortunately, there are many in the former camp who, due to their attitude of not embracing brand new progressive rock bands in 2018, will completely miss out on new and hungry artists like Lux Terminus and their new album The Courage to Be.

The Courage to Be is the debut album from this young and very talented band based out of Cleveland, Ohio, made up of bassist Brian Craft, drummer Matthew Kerschner, and keyboardist Vikram Shankar, who was most recently added to the lineup of veteran prog-metal supergroup Redemption.  And that’s it.  That’s the core band.  Keys, bass, and drums.  Have you ever heard of the band Dirty Loops?  Well, if not, go ahead and look up their song “Hit Me.”  We can wait.  Imagine the incredibly tight chops and skill of Dirty Loops, with their high level of production, as well, then remove the vocals and make it proggy and more artful.  Then you have something close to Lux Terminus.

It’s admittedly an interesting approach to a power trio setup, and it might put off less adventurous listeners at first, but we here at Sonic Perspectives hope to find ourselves among adventurous readers, who in turn become listeners to adventurous music they might not have heard of otherwise.  The Courage to Be lives up to its name quite respectably.  It has the courage to be.  Let’s break it down a bit.  First off, this debut album clocks in at just over an hour, which is impressive enough, but is it filler or fluff?  Hardly.  Within the overall album is a shorter suite broken up into four non-sequential tracks (which would have made a complete EP on their own,) that according to the press release “thematically tells a story of separation and hardship, but also hope and transcendence,” ending in an epilogue with some of the most impressive vocals we’ve heard from Anneke van Giersbergen in quite a while.  Yes, that’s right… Anneke is here.  But we’ll come back to that later.  Preceding the epilogue song is an epic clocking in at over 20 minutes.  And it’s also pretty darn awesome.

Throughout the rest of the album, we are treated to all instrumental music that explores the space of what can be done with the aforementioned power trio combo, and in a studio, Shankar, Craft, and Kerschner show that a lot can be done.  We don’t hear a guitar until the ninth song, and honestly, it’s not really missed all that much.  That’s a testament to how well the album is written, performed, and produced.  The album starts off with one of the sweetest and most heartwarming preludes on any recent album, resplendent with angelic female voiced “oohs,” harp, and synth strings.  From there we are blasted in the face by “Electrocommunion,” the song already released on Lux Terminus‘ Bandcamp page.  It’s aggressive and a great way to start the album.  It’s obvious none of them are strangers to locking in as a rhythm section together.  There are moments where Shankar‘s keys are in sync with Kerschner mightily stomping his kick drum, so much so that it’s the melody of the song at that point, and other moments where Craft‘s bass locks in with the kick in place of the keys.  All the while, there is intense synth playing not unlike bands such as Pendulum happening over top of everything else, a sound with which the listener will become quite familiar over the course of the entire album, albeit in slightly different forms.  It’s a cool trick, but might possibly overstay its welcome for some listeners, such as the klaxon-like buzz at the beginning of “Aberration.”

Elsewhere on the album, as in the second song of the album’s suite, “The Journey (II),” we are treated to floating fingered bass like you might hear on a more tender moment of a Stu Hamm solo album and quiet, light jazzy piano with ride cymbal.  There are fast fusion moments that would make Holdsworth‘s ears perk up, and solos that sound like they were left on Jordan Rudess‘ cutting room floor.  Like most music that adventurous listeners might tend to enjoy these days, there are elements taken from all kinds of genres, but the end goal is always to make them come together seamlessly, and Lux Terminus does a pretty admirable job of making that happen on this album, with catchy melodies and shred-tastic moments aplenty, but also more somber sections to bring a well of tears to the eye, as in “Spectral Shapes” or most of “The Road Home (III),” but as evidenced in the third movement of the suite, Lux Terminus always leaves us with a final light at the end of the tunnel. 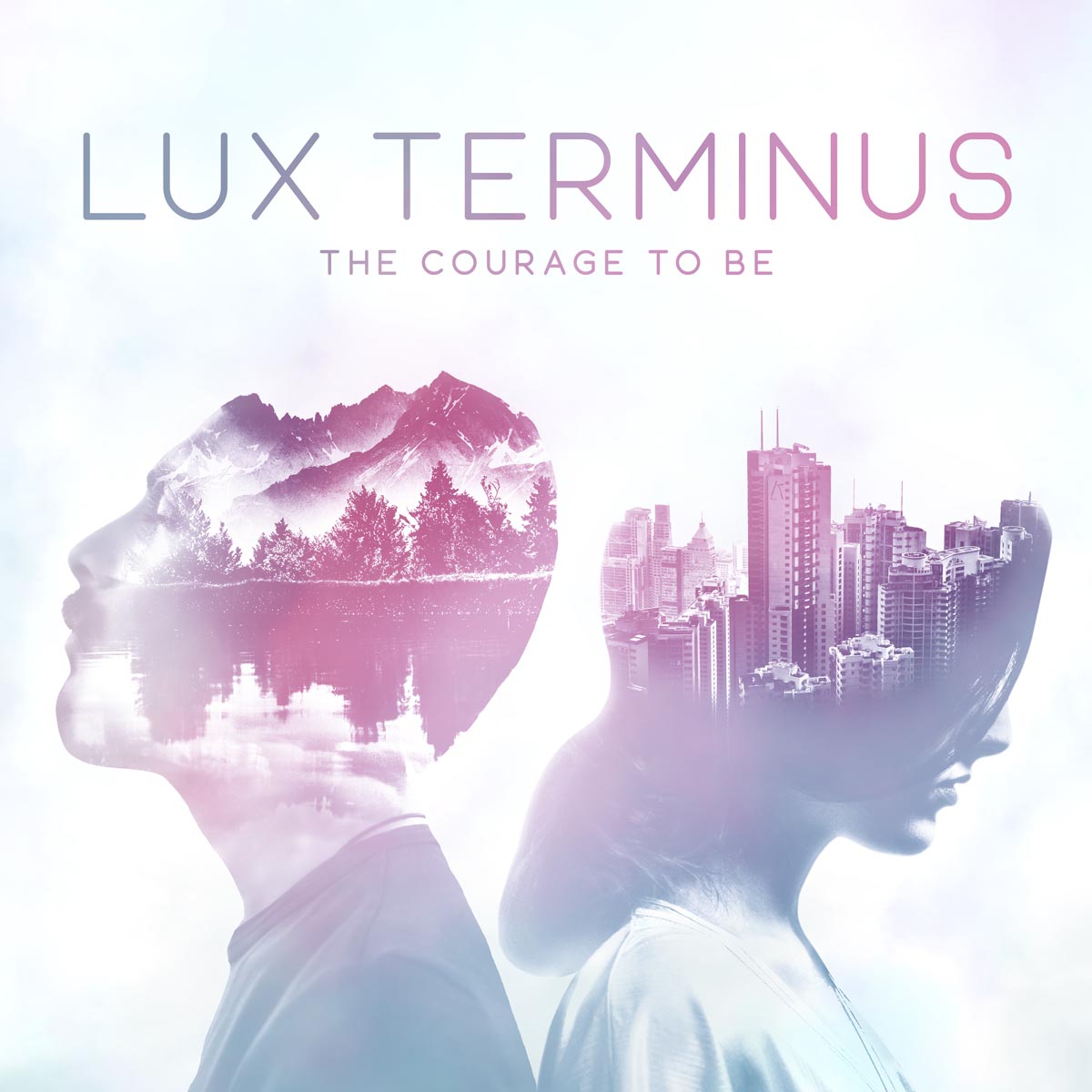 “The Courage to Be” Album Artwork

Eventually, we find ourselves at the main course of the album, the Herculean effort that is the titular “The Courage to Be.”  Of course, the band does well without a guitarist.  But after a while, even the staunchest keyboarder fan might yearn for a bit of distortion.  And it’s finally delivered in spades.  The song “The Courage to Be,” as of this writing, is in the upper pantheon of best epics of 2018, rubbing shoulders with Arena‘s “The Legend of Elijah Shade,” which I reviewed earlier in the year.  It starts humbly enough, with solo piano form Shankar (a trait in his writing that is admirable) that rests a moment before beginning a syncopated chordal melody that grows and grows and GROWS until it is joined by huge drums, brass, strings, and harp in a massive and ambitious symphonic moment that would make Michael J. Romeo raise his fist in the air like so much Judd Nelson at the end of The Breakfast Club.  Then the battle is engaged and the result is a song which must have taken a monumental amount of work to record in the studio.  Shankar‘s left hand must have been sore from how much he pounded the left side of the keyboard throughout this song, which is one of the treats of this album, hearing a progressive rock keyboardist slam the hell out of the lower octaves of the keyboard, because piano and keys should be used as more than just melody and solos.  After a bit, the onslaught recedes, and the listener is taken into some of the best soft moments of the album, with great piano soloing and mood building from melodic strings and arpeggio piano.  From there, we are taken into unison melody, replete with tubular bells, horns, and even more larger-than-life drum production like a classic Dream Theater finale.  And then finally, it happens.  The guitar arrives.  And it is good.  Timo Somers of the band Delain was a fantastic choice for a guest musician, as after nearly an hour of rocking out with no guitars, his fantastic tone and delivery give us the sweet emotional release we were only starting to suspect we needed.  The sound of his guitar is wide in both channels and bursting with tasteful reverb, woven nicely into the overall mix, like a ray of light bursting through the clouds, which is especially underscored when the tubular bells return.  And then when you think it can’t get much more epic, Raphael Weinroth-Browne (Leprous, Musk Ox, Karmancello), a Canadian cellist whose most recent claim to fame is a Max-Richter-inspired nine-cello version of Steven Wilson‘s “Hand. Cannot. Erase.,” comes in to play right alongside Vikram Shankar‘s calming piano chords, in a moment that would sound at home in a sprawling Japanese tale of Bushido and Ronin.

Finally, in an interesting choice, back-loading all of the guest musicians into the final moments of the album, we are finally treated to quite possibly the most beautiful singing voice on the planet, Anneke van Giersbergen (VUUR, The Gentle Storm, Devin Townsend Project, The Gathering).  As well-loved as van Giersbergen is, it’s sadly becoming a little too common to see her making guest appearances (which is most likely a testament to her love to simply create music and sing her heart out).  But even the most beautiful unicorn might run the risk of becoming simply a horse with a horn if seen too often.  Not the case here.  Anneke proves once again why she is in such demand, and so universally loved.  With a voice a friend of ours once described as “honey poured over velvet,” she helps a soft closing song rise from the ground to become a crescendo of warmth, light, and love.  It’s nearly perfect, this moment, and is a pure example of how to live in the now while one listens.

The Courage to Be overcomes real-life restraints of day jobs, crowdfunding, and the lack of courage to be what you want in this life, even at the risk of apathy from close-minded genre fans unwilling to give a new band a chance, to create a statement of art, beauty, storytelling, and plainly rocking out for the sheer fun of it.  It’s a case of being able to judge a book by its cover, because, they describe each other perfectly.  The cover art is a great example of modern photo manipulation and digital art that sets a backdrop in the mind of the listener to support the music being heard for the next hour.  By the time the album is over, it’s hard to believe that three guys in Cleveland (with a little help from their friends around the world) were able to create a work this ambitious and, well, adventurous.  But they did.  And as progressive music fans around the world book their cabins and buy their tickets for the big prog-rock festivals of the world, to see beloved bands older and newer, they should take a moment to add this to their playlist for the trip… it’s one impressive debut that deserves a complete listen, and begs for an immediate second one.  Lux Terminus definitely is a band to watch very closely.

“The Courage to Be” Track-Listing:

"The Courage to Be" sounds amazing, firstly due to the fact that it was produced by the band and mastered by Brett Caldas-Lima. Listeners who don't absolutely love synth leads and maybe wish prog-rock had a bit more straight-up piano will find a lot to like here. Shankar varies his keyboard sounds greatly, and brings in some techniques not too common in this genre, to great effect. Kerschner and Craft's playing is tight and punchy all throughout, and elevates the entire experience to a higher level of musicianship. The band leans a little too much on some similar riffs in the more rocking moments a few times over the course of the album to where they might seem a little repetitive (and not in a reprise sort of way,) but that's a very minor complaint in all fairness. High marks to the band for attempting such a lofty work with the lineup of instruments involved, and only relying on vocals and guitars (usually the stars of the show) for a few spare moments at the end, reminding us that prog-rock can be what you make it.