As one of the early Gothic metal bands to emerge out of the early aftermath of the mid-90s death/doom craze, Lacuna Coil has naturally been far from strangers to change. Originally being part of said scene briefly under the moniker Ethereal and sticking fairly close to the stylistic conventions pioneered by Theater Of Tragedy, they would tread a path somewhat comparable to Dutch fellow travelers Within Temptation in moving towards a more rock-based, mainline sound that was arguably the forerunner to the commercial phenomenon that was Evanescence. Following their widely hailed and popular 2002 LP “Comalies”, this outfit began shifting with the popular winds and ultimately ended up abandoning the metallic fervor that made their earlier offerings staples of the late 90s Gothic metal craze that saw the ascendency of acts such as Tristania and Beseech, alienating a contingent of their older audience while, nevertheless, expanding their commercial viability up until the present.

Coming in after a slight return to the metal world in 2014’s “Broken Crown Halo” and the somewhat more rocking 2016 outing “Delirium”, this veteran Italian outfit has decided to flip the proverbial script with arguably one of the most intense examples of melancholy rage heard since the earliest incarnations of the Gothic style. In a sense, the wailing beast of an album that is “Black Anima” defies a number of existing conventions, infusing a strong degree of modern groove metal elements into the aesthetic and giving things a more animated and percussive feel. For his first outing as the principle guitarist of the fold, Diego Cavallotti (who provided a guest slot on “Delirium”) brings a decidedly dense and dark tone to things, reminiscent mostly of Jeff Loomis but even showcasing some Meshuggah affinity in his riff work. Likewise, the character of Andrea Ferro has veered back to its guttural, death bark roots something fierce, which plays quite well with the mechanistic, heavily rhythmic template provided by the guitars.

Nevertheless, this is ultimately a Gothic metal affair, and is thus painted by a sufficient degree of aesthetic beauty and smoothness to balance the bestial rage factor with a sense of mystique. Much of this is accomplished through Cristina Scabbia’s powerful yet angelic vocal work, which has lost none of its luster over the past couple decades, though one would be remiss to deny the impact of the band’s overall sonic template and the prominent use of keyboards to further cushion the jagged thorns of this sonic bouquet of black roses. Particularly on the more haunting and droning flow of “The End Is All I Can See” and “Apocalypse”, a more techno-like and less abrasive picture emerges that plays well to Scabbia’s voice, and Ferro’s beastly foil to her beauty persona takes on a more moderated and occasionally melodic tone. Interestingly enough, Cavallotti’s guitar work proves extremely adaptive in this capacity, as he is able to both emulate the more restrained tone of the “Comalies” sound while also throwing in a few extravagant lead guitar slots that are a tad atypical for this format. 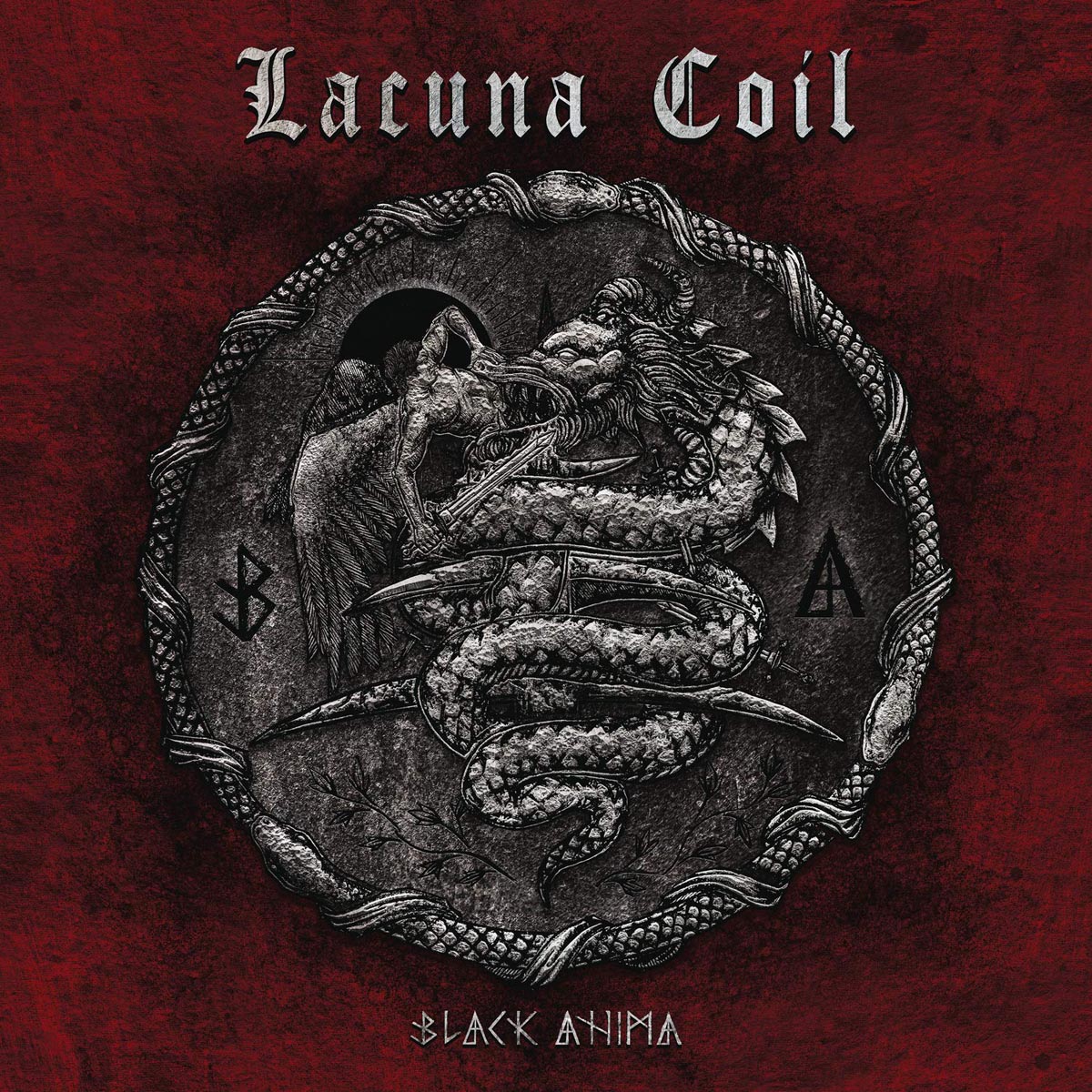 Those exceptional cases being noted, this is an album that is possessed of a uniquely modern and highly original character, one that stretches the definition of where Gothic metal ends and certain newer sectarian sub-genres such as groove metal and even djent begin. Sometimes this manifests in a subtle fashion, like a mostly driving Gothic anthem with a few chugging riff elements and a more forceful harsh vocal element like “Save Me” and the title song “Black Anima”. However, a quick sampling of rhythmic pile-drivers such as “Reckless” and “Layers Of Time” reveal an album that flirts heavily with territory that is often reserved to the likes of Ghost Ship Octavius, whereas overt chug machines such as “Now Or Never” and “Under The Surface” see the riff work and Ferro’s vocals occasionally veering dangerously close to deathcore territory. Credit should likewise be given to newly recruited drummer Richard Meiz in shaping these songs into a horse of a more metallic color, as his precision drum work is intense enough to pass for a number of prominent figures in the more extreme fringes of modern death metal.

Naturally the nagging question on the minds of every older Gothic metal fan who is nostalgic for the days when Theater Of Tragedy were defining the style with Liv Kristine at the helm and The Sins Of Thy Beloved were still putting out albums is does this album compare to “Comalies”, let alone the stuff from before. The short answer is no, but with the added caveat that it is very close to the same level of quality in its own right, despite being stylistically a far cry from the sound of 20 years prior. This is the sort of album that is sure to break down boundaries and may well prove to help expand the very definition of the Gothic metal, in much the same way that Ukraine’s Ignea has helped to expand the symphonic metal paradigm via their 2017 debut “The Sign Of Faith”. It doesn’t really possess the sort of vintage, organic atmosphere that nostalgia hounds may seek, but it does provide a much needed shot in the arm to a band that has been a bit too mellow of late, and those who want a bit more metallic edge in their Gothic metal are highly encouraged to immerse themselves in the experience that is “Black Anima”.

Following over a decade of lighter fair that catered more to the mainline sensibilities of the post-Evanescence scene, one of Gothic metal’s iconic pioneers has opted to up the aggression factor with their heaviest offering since Comalies