To the untrained eye, John 5 is a standard-issue metal rhythm guitar player, mashing out dependable distorted chugga chugga on a nightly basis alongside some of the successors to Alice Cooper shock rock kingdom. Meanwhile, behind the façade of this innocent-looking bookstore, there lurks one of the most incredible players on the scene today. From watching “Hee Haw” on television as a lad, J5 was mesmerized with the southern-fried chicken pickin’ of heroes like Buck Owens, Don Rich, and especially the inimitable Roy Clark. Young John’s dream was to be the biggest Tele-slinging badass in the Nashville-style session player scene, but because life is inescapably strange, Five was drawn into David Lee Roth’s band, and later Manson’s, and the rest is history. What we have as a result is a metal shredding fiend who is equally at home fingerpicking country western licks.

In the here and now, little Johnny Five is all grown up and the warpaint is all business. This week, the new album is Invasion, and it is a big fistful of uppers. It is like someone equipped the Wicked Witch’s army with proton packs and set them loose on Smurf Village. The self-titled introductory track seems to be on such a sinister warpath, kicking off with thrumming bass guitar care of Ian Ross, before Logan Miles Nix brings in some militant marching on the drum kit. Five sets the mood with an eerie lead guitar shriek, before the album ushers in the next track… and this is where we begin to fully understand this album is a party in a can, and not to be taken too seriously. The track, “I am John 5,” literally announces to us in robot voice that it is, in fact, John 5. Add some funky fresh dance club beats, and next thing you know, J5 is trying to go all Nuno on some kind of psychedelic Flight of the Bumblebee with some off-the-charts shredding. Kudos to some very funkadelic bass jamming by Mr. Ross. The voices of what we can only imagine are screaming Godzilla victims are a very nice touch, to really put an image to the Evil Robot J5 kicking down doors and taking names.

Although the next track, “Midnight Mass,” is for most purposes a straight-ahead metal ass-kicker, there are some innovative licks to be found here, with some creative bends and expression. The grooves are fun, and usher us quite well into the next track, “Zoinks!” This little number is a fun detour from some of the usual J5 fare. The track is based around funky semi-dirty spanky guitar and wah pedal. However, just when we get comfortable and think it’s just a fun little Red Hot Chili Peppers jam session, Five transforms into Vinnie Moore and busts out some phrasing and tapping that is out of this world. 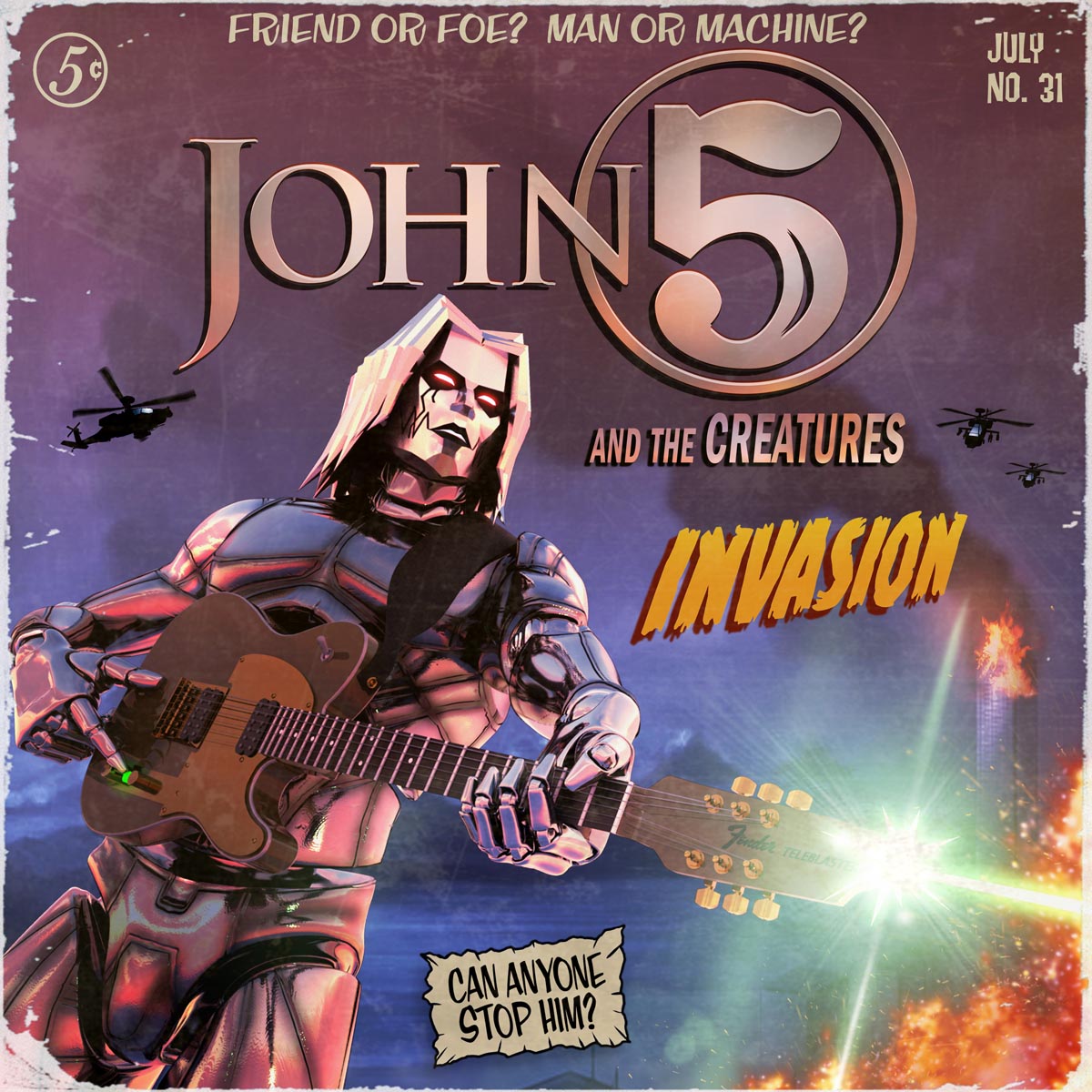 A personal favorite, the track called “Howdy” is a spring reverb Tennessee hoedown in the aforementioned Roy Clark style, and although these tracks are common on J5 solo records, this one is just so damned good and fun, right down to the dimpled cowgirl in boots and skirt yelling “Howdeeeee!” It is worth noting that although we are accustomed to J5 being able to do almost anything, it is impressive that Ross and Nix do session-quality work reproducing authentic outlaw country drum and bass work. All around high-Five (pun intended) to the whole band for this fun little tune.

Speaking of fun, you are dared not to laugh or at least crack a stupid smile, in which a robotic woman voice advises us very seriously to “Crank it, motherfucker.” The whole track has more than a hint of Zombie influence, although the guitar solo portions with impressively complex scales and arpeggios definitely stray from the RZ plantation. Noteworthy is the last half of the album, which melts into plucked out clean chords a la “Diary of a Madman” or “Call of Kthulu,” crushing into a heavy chord pattern a la Dream Theater “Finally Free,” which of course is basically the Beatles’ “She’s So Heavy” outro.

We get another sampling of J5 country roots in the next track, “Cactus Flower,” although with swirling synth chords, and tasteful B-bender clean Tele playing, it is a more thoughtful and laid-back track than “Howdy,” which is really just a Hee Haw hoedown showdown. If you are unfamiliar with B-bender applications in playing, check out Jimmy Page’s leads on “All My Love,” where the pitch of single notes rapidly goes up and then back down like a little whammy bar.

The album approached the final lap with “I Want It All,” and “I Like the Funk,” both showcases for blistering leads, the kinds of songs you may expect on a classic Vai or Satriani record. The closing come from the hand of “Constant Sorrow,” which isn’t some mopey tear-jerker; it is actually a bit more delta blues in its attitude. It really could have been right at home being the last track on Physical Graffiti.

Let’s suppose Invasion is a woman. Let us also suppose another recent album is also a woman. Perhaps the Richard Henshall solo album Cocoon we fell in love with last week. Both are instrumental albums by guitarists. Cocoon, if she is a woman, is one you meet for coffee, and discuss epistemology, deontology, utilitarianism, and objectivism. She has amazing eyes and a great laugh and a year later you’re married. John 5’s Invasion, on the other hand, is an inked-up girl with green hair you take to concerts and she is nonstop fun. Maybe even make some home movies with her. No, she may never get to meet your parents, but that’s not the point. She is a nonstop, unapologetic good time.

So go ahead. You want a date with the freaky green-haired girl on the motorcycle? Here’s her number. Or at least where you can preorder her. Pick her up July 31. For a good time, click here.

Hey. Psst. Over here. Want to hear a secret? Under the far-out stage costumes and scary makeup, John 5 is a prince of a human being, and an otherworldly musician. What he does with a guitar will blow your mind, and so will this album. We don’t care what kind of metal you are into, check this one out. If you are new to John 5’s solo work, this one is a perfect place to start