The master of yesterday and today.

Rogga Johansson is arguably the busiest man in death metal these days, juggling dozens of currently active projects and about half as many that he has since parted ways with, and sticking to a common thread of maintaining the status of the old school Swedish death metal scene. It seemed all but destined that he would join forces with one of the sub-genre’s most consequential early figures, namely the mastermind behind Master and a number of other early entries into the American death metal scene Paul Speckmann. Together as the simply dubbed Johansson & Speckmann project, they’ve made a sizable ruckus of late, unleashing four mighty LPs in the old style since their collaborative efforts began back in 2013. With no signs of slowing down, and seemingly a desire to avoid doing just that in a literal sense to boot, they’ve returned to unleash a veritable torrent of old fashioned, high octane aggression with their latest offering “The Germs Of Circumstance.”

Though this project has always made a practice of flying the flags of discontent with a raw edge, this time around they’ve basically thrown any sense of nuance aside and have switched up the more measured and occasionally elaborate model utilized on 2018’s “From The Mouth Of Madness” for a one-dimensional iron fist to the face. While their previous outing would occasionally feature breaks from the auditory carnage and throw in an occasional mid-paced groovy breakdown to give the listener a rest, this is a relentless, 8 part kill session that doesn’t let up for its 26 minute duration. For his part, Speckmann’s vocals are the same mid-ranged growl meets an exaggerated Lemmy Kilmister yell that he’s always brought to the table, with maybe a tad more power, but the one who really sets the tone of this album is drummer Brynjar Lynghaug, whose sheer intensity and blast-happy drumming is clearly channeling the signature work of Dave Hollingshead of Repulsion fame.

As with any album that takes an all fast, all the time approach to making the audience ruin their spinal cords, the most challenging part of this is trying to tell one song from the next as they all tend to run at a similar tempo and channel the same dark, nihilistic imagery. The opening crusher and title song “The Germs Of Circumstance” stands apart in being more of a conventional thrasher and only indulging in a moderate degree of full on rhythmic chaos, kind of like a Jungle Rot romp with occasional sides of Morbid Angel. “Take The Lions Share” features some riff work that’s a bit more Emtombed-like, and even has a bit more of a melodic scheme going to the guitars at time, but is otherwise a full blasting storm of brutality. “Confessions Of A Vital Leader” draws things out a bit more and has some intricate guitar solo interchanges, while “I Was Left To Stare” has a bit more of a “Leprosy” era Death brand of slightly slower thrashing shtick going and takes a little longer to go full blast mode, but honestly, the differences are so subtle from one song to the next that it barely matters. 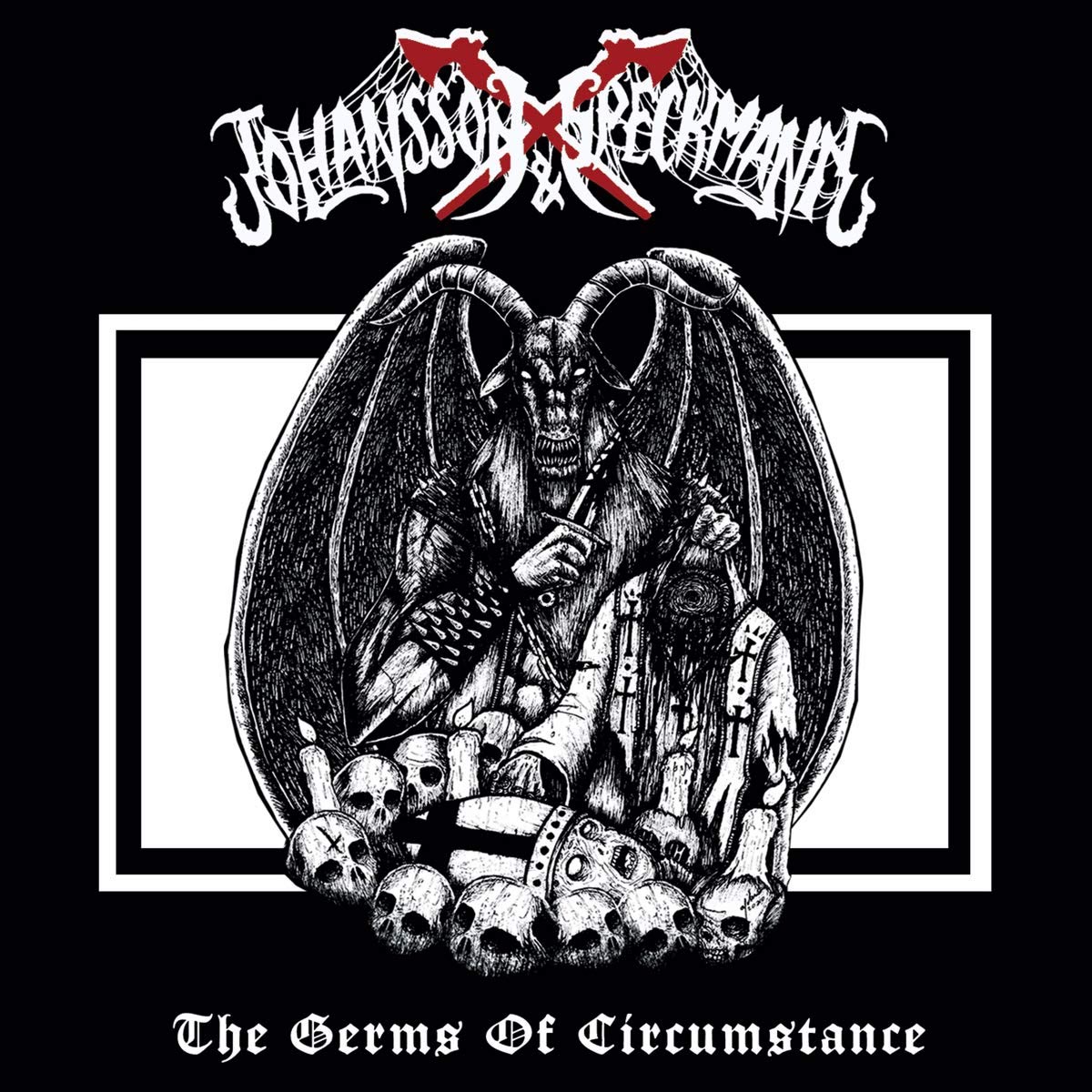 “The Germs Of Circumstance” Album Artwork

Those who like variety in their death metal might find this a bit on the one-dimensional side, but generally speaking, this is the sort of album that one would expect out of the likes of Rogga Johansson. To be fair, past albums by this project have shown a bit more variation from one song to the next, but the name of the game wherein “The Germs Of Circumstance” is concerned is sticking to what works. Though not the first album to tread the path of pure savagery, is this among the more in-your-face blatant exercises in it to every come out of either Johansson’s or Speckmann’s arsenal, be it under this particular collaboration or on their own respective projects. It’ll likely appeal just as much to fans of Napalm Death as it will those who crave the old school stylings of early 90s Master, Entombed or Dismember, and it’s a sure bet that just about any fan of death metal that is fast, thrashing and vicious will find a winner with this LP with an EP’s length.

“The Germs of Circumstance” track-listing

Returning for their fifth studio slaughter, the king of death metal’s past and also its present have opted for a more aggressive and frenetic battle plan like twin berserkers upon the shore.