Though generally regarded as an afterthought when compared to the pioneering figures of the Gothenburg scene, the American melodic death metal scene that emerged in the 2000s was a force unto itself that provided its own unique twist on the concept of merging extreme metal with the harmonic consonance of Iron Maiden. While many in the northeastern part of the continental U.S. sought to merge this style with a hardcore aesthetic as typified in the works of Killswitch Engage and Trivium, the true American successor of the Swedish style would prove to be The Black Dahlia Murder, taking the more chaotic and speed-obsessed character of earlier At The Gates works and the thrashing force of The Crown and injecting a bit more of a technical edge into the mix. It is in this context Inferi, a southeastern melodic death upstart with an affinity for the ghoulish undead spawn of a dark wizard’s curse, first entered the scene in 2006 and spawned two respectable independent LPs before the close of the decade.

The passage of a decade since the release of their 2009 sophomore outing The End Of A Era has brought some changes to Inferi’s sound, some of it owing to a revolving door of musicians aside from lone founder and guitar virtuoso Malcolm Pugh, the rest likely to the general ebb and flow of trends within the American scene. A healthy degree of technical additives into their formula had already become apparent by the release of their first label supported venture in 2014’s The Path Of Apotheosis, which when coupled with the influence that naturally comes from touring with the tech obsessed likes of Rivers Of Nihil, Obscura and Beyond Creation, has resulted in a very different band from the one that originally penned their earlier opuses. Alongside the facts that a new vocalist has been added into the arrangement, greater studio resources have become available, and the original has long been out of print, it is defensible if not totally logical that one of their older offerings would be receiving a studio update.

In essence, the resulting 2019 rerecording that is The End Of A Era: Rebirth could be best described as what might happen if one of The Black Dahlia Murder’s albums had been rerecorded by musicians from Arsis and Allegaeon, with perhaps an occasional guest slot from the keyboardist of Fleshgod Apocalypse. The impact factor being increased and the guitar work being a tad bit fancier is just part of the picture, as the highly impressive performance of the 2 newcomers that make up this band’s rhythm section can be credited with this version of the album being the superior one. Of particular note is the wild bass work of Andrew Kim, which often resembles the glassy tone and noodling speed of Steve DiGorgio, which reaches an absolute fever pitch during a shredding solo segment on the towering 8 minutes plus instrumental extravaganza “The Warrior’s Infinite Opus”. Nevertheless, one would be remiss to gloss over the precision-based, high octane kit work of Spencer Moore, who definitely paid attention while under the tutelage of At The Gates. 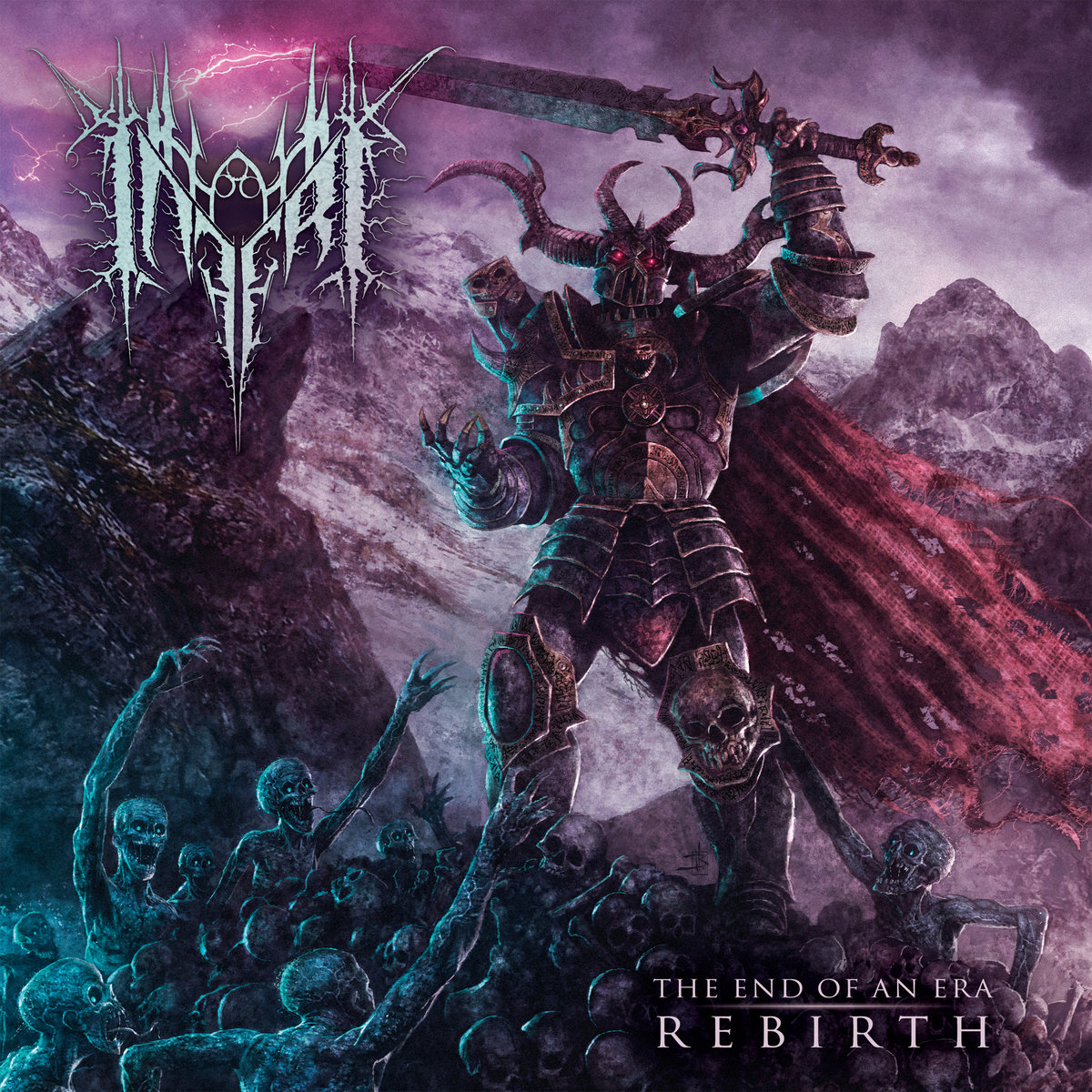 “The End Of A Era: Rebirth” Album Artwork

Naturally all the chops in the world mean little if things are lacking in the songwriting department, and despite their age, these songs showcase the degree of staying power and adaptability needed to compete with a growing array of tech happy, American-based death metal bands. Whether it be the more epic and harmonically dense numbers like “The Endless Siege” and the symphonic-tinged reworking of “Cursed Unholy”, or more concise sessions of rapid fire bludgeoning with a melancholic tonal underpinning such as “The War Machine Embodiment” or “Sentenced To Eternal Life”, no expense is spared in the aggression department. Though much of the intrigue found here is the handiwork of a highly skilled rhythm section and a duo of shred happy guitarists that could give James Malone and Brandon Ellis a serious run for their money, credit should also be given to recently recruited vocalist, Texas scene veteran and one-time Vale Of Pnath front man Steve Boiser, who proves equally competent in emulating the range extremities of Chris Barnes and Dani Filth.

Some may object to the practice of rerecording old material, which has become a fairly common practice of late since Iced Earth provided arguably the most visible example of it in the mid-90s after Matt Barlow replaced John Greely. However, this is one of those cases where even the staunchest of critics of this practice will have to concede that the newer version is the better one. This isn’t meant to denigrate the strength that this band had already been showcasing in their formative years, but the sonic picture painted here is a far more unique and distinctive one, and definitely one that will play better to the majority of their newer fans who came in since they joined the ranks at The Artisan Era in 2014. For any curious folks who would love to hear what The Black Dahlia Murder’s Nocturnal would sound like with a side helping of A Celebration Of Guilt and occasionally Oracles, this is about as close as it gets to that without having a super group form out of all the musicians involved. Highly recommended.

“The End Of A Era: Rebirth” Track-listing:

1. The Ruin of Mankind
2. Gatherings in the Chamber of Madness
3. The Endless Siege
4. New Breed of Savior
5. Sentenced to Eternal Life
6. The War Machine Embodiment
7. The Warrior’s Infinite Opus
8. Quest for the Trinity
9. Forged in the Phlegethon
10. Cursed Unholy

From humble beginnings amid the ubiquitous influence of The Black Dahlia Murder upon the American melodeath scene, a Tennessee-born berserker strikes at the opposition by upping their tech and turning the clock forward 10 years