If you grew up in the 80s and you were old enough to be chasing down the FM waves in your dad’s old radio, you have heard at least one or two Great White’s hit songs. And now you’d say “Wait, are those guys still in the business?” Maybe to your surprise and to the amusement of many, the Grammy nominated and multi-platinum band, that started their career more than 30 years ago, is still alive and kicking, and precisely today they have a new album out entitled “Full Circle”. Since 1982, the Great White sound has captivated audiences worldwide with crushing blues-based guitar riffs and swagger that invokes an emotional high for anyone that listens. And whether you have remained a loyal fan or you lost complete track of their whereabouts and musical musings after the grunge took over MTV in the early 90s, you should keep reading…

Let me first give you some pieces of useful information: “Full Circle” is the second musical effort of the collective comprised by Terry Ilous (vocals) and Scott Snyder (bass) with original members Mark Kendall (Guitars), Michael Lardie (guitars and keyboards) and Audie Desbrow (drums), following their previous album “Elation” which was the first one featuring Ilous at the mic and saw the light of day in 2012. This time around the band teamed up with its original producer Michael Wagener, the legendary man behind some iconic albums by Alice Cooper, Megadeth, Metallica, Ozzy Osbourne and a slew of other Rock Gods. Recorded at Wagener’s Nashville-based WireWorld Studio, Great White spent the majority of January and February 2017 sequestered in Music City. The packaging includes a must-have companion DVD called “Making of Full Circle”, capturing the band developing the songs in the studio – a never-before-seen band access. Now let’s take a look at what they have done this time around, shall we? 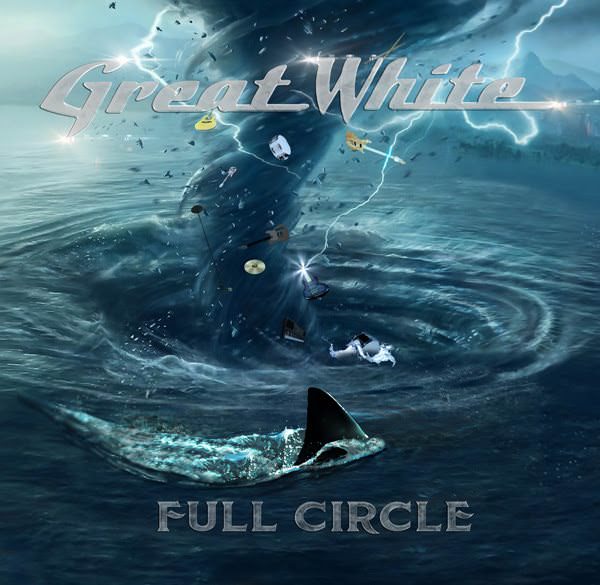 The record starts off with “I’m Alright“, slapping you in the face with an brief infectious doom-tinged guitar riff that quickly morphs into an uptempo groovy rhythm. Right off the bat their signature melodic choruses made presence, and they will accompany you throughout the whole 9 songs, with Terry’s voice easily moving through the song lines. A 80’s flavored guitar solo paired with some trailing synth effects immediately displays Mark Kendall’s well-known knack for the precise melody: pure gusto instead of unnecessary excess. The chorus returns to bring the track to its ending, and when it fades something is clear: Michael Wagener production skills come to the fore in the band’s sound, there’s a tightness and spacial ingredient in the music that was not present before.

“Moving On” kicks off with some Great White signature guitars, and Terry’s wonderful vocal delivery pretty much steals the track, there’s so much power and tessitura to his voice that I really don’t miss Jack Russell (without meaning to take anything away from him, as he is a terrific singer on his own right). A short lap guitar paves the way for a too-short guitar solo and the choruses re-appear making the track very enjoyable. The sound of a spinning coin over a table began “This is the Life“, which is one of my favorite tracks of the album. The blues rock swagger intro reminds me of the good old times when the hair bands dominated the airwaves, the chorus is overly catchy and Terry shines through it, and the perfectly executed solo favoring the track’s fluidity hits the perfect mark, with Kendall’s guitar emulating the second verse of the main chorus towards the finale.

It wouldn’t be a Great White record without a ballad, and “Let Me In” is exactly that: starts off with an acoustic intro in the best Great White fashion and builds up from there. The 80s brought us one of the finest rock and roll ballads ever written and Great White always excelled in that chapter. This one is no exception, it can be easily placed among the best of their repertoire: Pure soulful delivery while the heft of the bass and guitars temper the sweetness of the lyrics. “Moonshine” brings me in a trip down memory lane with its initial drum pattern followed by some raspy vocals before the rhythm changes into a classic stripper’s anthem. If your body doesn’t move while listening to this song you really need to check your pulse. “Cry of a Nation” sports a tight combination of bass lines and drums which serves as the backbone to a mysterious atmosphere wrapped by the raw emotion in Illous’ voice and more grinding bluesy riffs courtesy of Mark Kendall. It fades out leaving me wanting for more.

“Give it Up” is next, and is like jumping in the time machine and embarking in a journey of memories, heading back to the Sunset Strip days. It exudes all the elements which made this band sell millions of records: ear-catching vocals, gut-punching melodies, crushing blues-based guitar riffs, unforgiving bass and groovy drums. But, if you think you’ve listened to the best they got to offer, you are in for a treat. “Big Time” is yet another album highlight, and if you enjoyed the previous song, this will set you in an euphoric mood and will send you straight to the stratosphere: a sharp-cutting energy packed and emotional ride, with feverish energy and far stretching vocals, topped off with a made-in-heaven chorus stamped with the best Great White seal. “Never Let You Down” is the final track and they go out in a high note, a slow burner that recalls the feel of early Bad Company with some galvanizing and blues-lamenting guitars.

If with “Elation” Great White managed to step up and prove that not only there was life after Jack Russell’s departure but that they still had it in them; with “Full Circle” they have knocked it out of the park. This is not one-and-done swansong for a band that has churned out chromium-laced hard rock since the early ‘80s. They’ve had changes, they’ve fallen off the path, but they have never slowed down, and “Full Circle” serves as the true testament of a musical collective that have chosen to work together, putting egos aside for the love of their fans. A sweet, raw and signature blues-hued sounding album, infused with some of the best compositions this band has come up with in years, “Full Circle” is a complete success in my book, and if you enjoy fully charged modern-day blues-rock, this is a record you want in your collection. Bravo!