Even eight years after their inception, the lineup of Flying Colors still appears too good to be true: Steve Morse, Neal Morse, Dave LaRue, Casey McPherson and Mike Portnoy. Unlike some supergroup projects, Flying Colors have always focused on the craft of songwriting, their instrumental prowess being a well-positioned bonus. The fact that they hold themselves as being a band – rather than a project – also bodes well for their longevity and camaraderie. Taking in a full concert covering their three studio albums is a telling reminder of just how diverse the band’s catalog already is: from anthems like “Kayla” and “The Storm” to transcendent pieces like “Peaceful Harbor” to rockers like “More” to ballads like “You Are Not Alone” to prog epics like “Infinite Fire” and “Crawl,” they’ve got all the bases covered.

Along with those three studio albums are three accompanying live video/audio packages chronicling their respective tours. Overkill? Perhaps. But in their defense, the band chooses to film each tour because only a small percentage of the band’s fans ever have the opportunity to see Flying Colors play live in person due to an extremely short touring schedule after each album, usually attributed to Steve Morse’s busy schedule with his day job in Deep Purple. Fair enough. So, how does this video stack up compared to the other two live releases, and is it worth the purchase for fans who already have one or both of “Third Stage”’s predecessors? A comparison is made at the bottom of this review to answer that question but first, let’s look at the content of this release on its own terms. 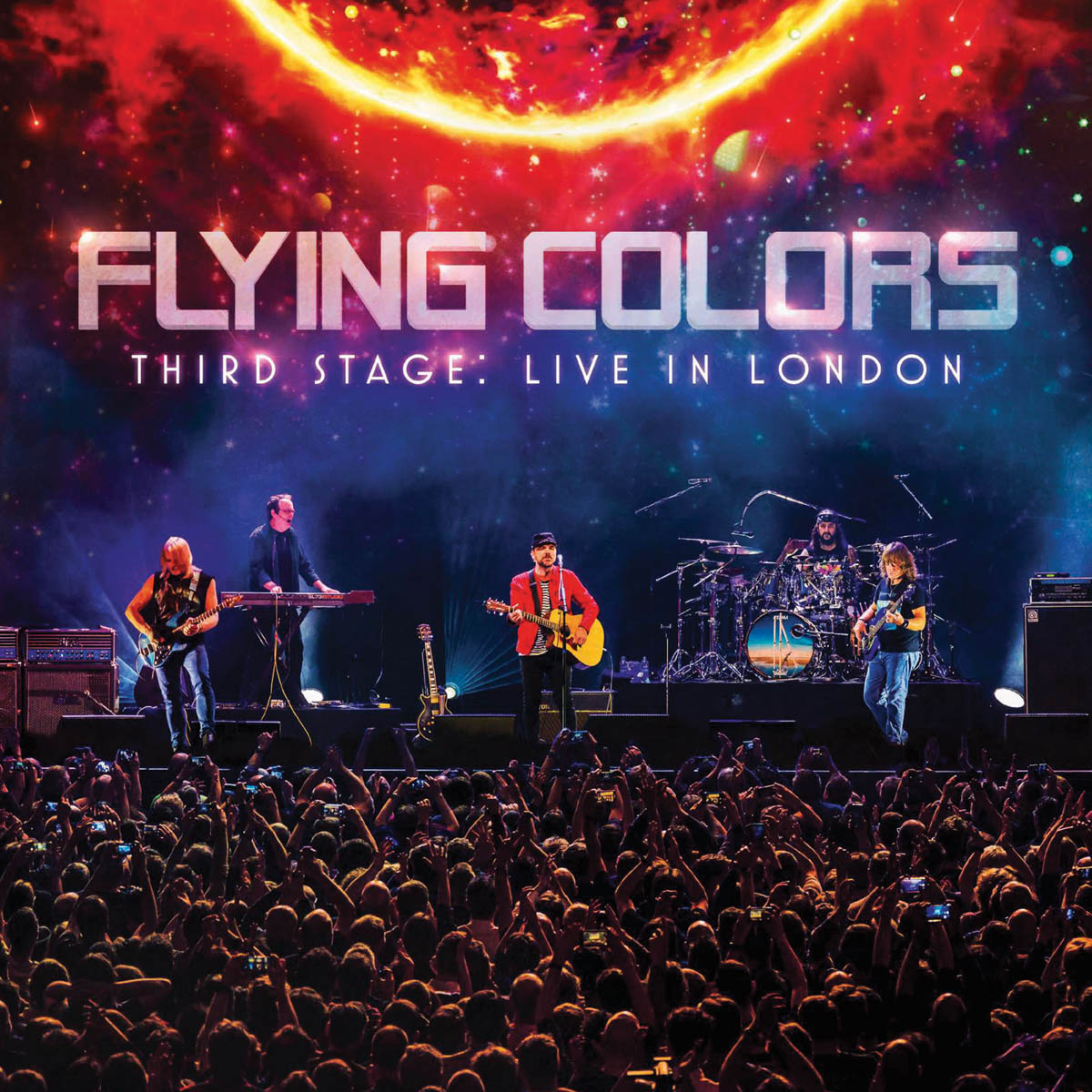 Taking the stage to the strains of The Beatles’ “Flying”, the band launches into the opener from their debut album “Blue Ocean”. As one of the band’s better tracks, it’s a solid beginning to a live show and also affords an opportunity for each member to layer in one by one. We quickly ascertain that Dave LaRue’s fantastic punchy bass tone is prominent enough in the mix to be heard throughout the show, that Steve Morse can still wail on guitar as he’s done for the past 40-plus years, and that Casey brings the secret weapon to the band with his vocal delivery. Mike Portnoy and Neal Morse work their respective magic on their risers in the back line, relaxed and thoroughly enjoying the opportunity to shine with this band.

The main event for another live album is featuring the new material off of latest studio release “Third Degree” and in this regard the show does not disappoint. “The Loss Inside” is a sublimely intense piece, which also could have made for a killer concert opener. LaRue’s slapping and popping is at the fore, Neal delivers a scorching organ solo and then is joined by Steve for an impressive sequence in unison. “More” follows, with a middle section that highlights Portnoy’s tight, passionate drumming. “Geronimo” shines, being somewhat unique in the band’s catalog as if they decided to channel Donald Fagen’s writing and make it their own. It’s also a welcome addition to the setlist, as it was added only later on in the tour. McPherson then gets the spotlight on “You Are Not Alone”, not for musical reasons but more poignantly due to the storyline of a Texas hurricane rescue mission that he felt compelled to join, pulling trapped people out of their flooded homes to safety in a motorboat. A compassionate sense of hope descends upon the concert hall, elevating a simple ballad into a vehicle of connection and humanity. “Love Letter” delivers the pop side of the band through its vocal harmonies with almost bubblegum sweetness, but it’s in Portnoy’s favorite “Crawl” that the new album summits the mountain with a mighty guitar solo from Steve and a truly epic ending. Though well represented, it’s still painful to not have the entire new album played live, especially the centerpiece “Last Train Home”. Save something for the next tour, then!

Of course, there is plenty of older material represented from the catalog as well, such as the always electrifying “Forever In A Daze” highlighting LaRue and Portnoy who are always on the top of their game. For a period of time there are almost too many emotional epics in a row towards the latter half of the show. During the spiritually-infused “Peaceful Harbor” McPherson lets the audience take a vocal solo with only his acoustic guitar accompanying, a spine-tingling moment which is capped by the band’s re-entry with Steve’s guitar flying high. Goosebumps. “Infinite Fire” delivers the proggier goods, almost veering into Transatlantic territory, and a brilliant way to end the set. “The Storm” is utterly triumphant in the encore after which the band chooses to close with the hard hitting “Mask Machine” featuring Peart-worthy drums fills from Portnoy in the finale. 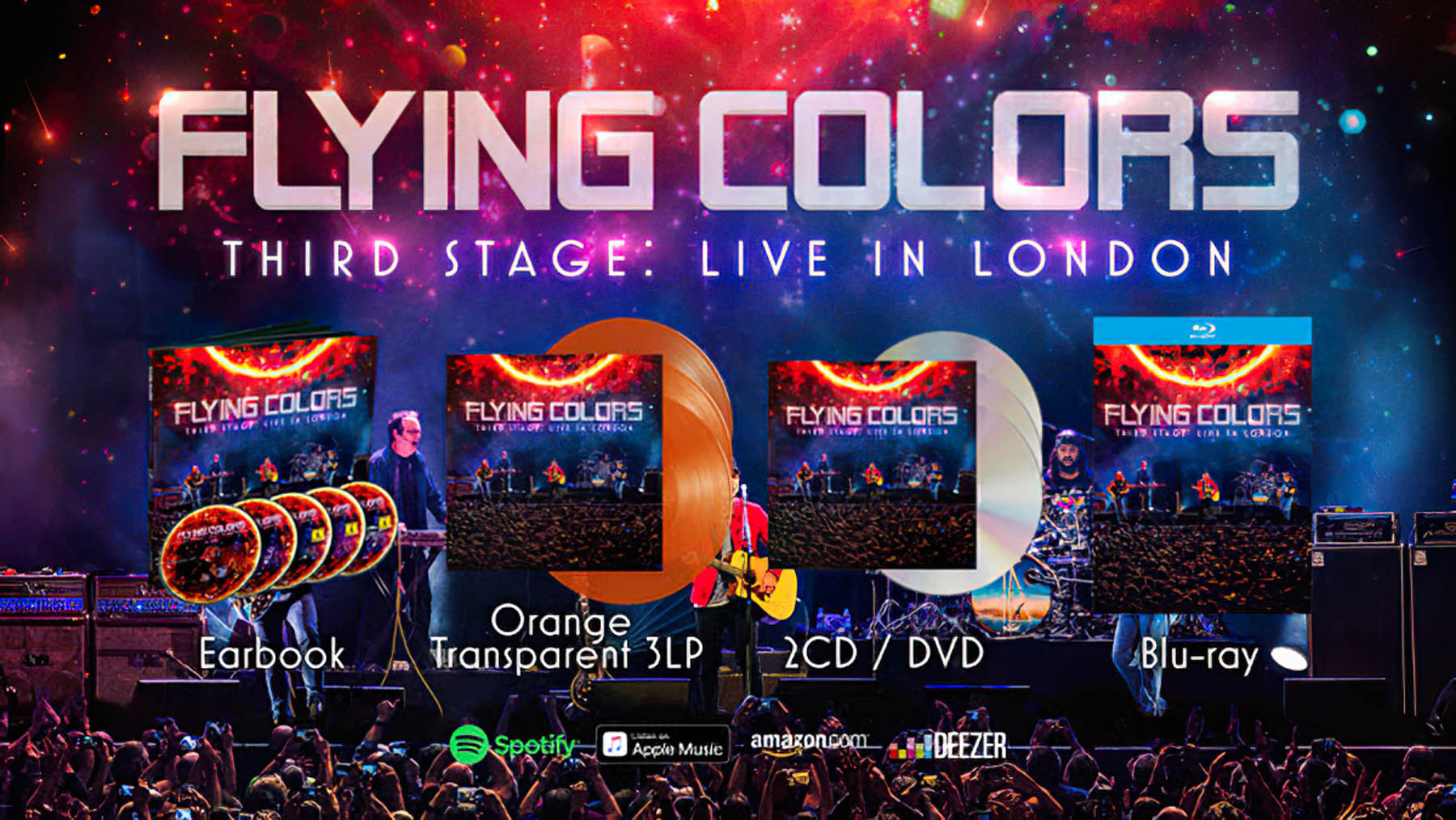 The setting of a sold-out Shepherds Bush Empire in London offers a beautiful backdrop, though it must be said that a seated audience (often visible in the lights) takes down the energy a notch. The overzealous security guards make sure the crowd doesn’t get too rowdy or close to the stage, which leads to a funny side note: during the “pound for pound” section of the emotional “Cosmic Symphony” Casey wanders into the hall, singing amidst the audience. Reportedly at one point as he was wandering in front of the stage he was approached by a clueless security guard and told to sit down! You can hear the laughter of the crowd in the audio, but the director chooses not to show the actual incident, instead cutting to a shot of Neal looking amused on keyboards and giving Mike a shrug. Expertly mixed by Jerry Guidroz, the audio sounds fantastic with each player getting their due and the audience interaction coming in just the right amount. The video is well filmed with multiple camera angles that focus on the right musician at the right time and occasionally features Christian Rios’ videos tastefully (and briefly) overlaid on the video screen. For those that hate video overlays in concert videos: don’t be afraid, this is quite minimally employed.

Given all of these strengths, how does it stack up against the two previous concert releases? To answer this, I watched the song “Kayla” from each live DVD of the past 3 tours. In comparing and contrasting, the performances were – of course – consistently solid and rewarding and there were many similarities, even in wardrobe! Aside from one outro being played by Neal on harpsichord instead of Steve’s typical guitar, most of the arrangements were very close. The main difference came in lighting and atmosphere, with the “Second Flight: Live at the Z7” show having more dramatic stage presence, lighting and filming than the other two DVDs, plus a standing crowd who are more engaged than the seated London show. You can viscerally feel the intensity of Portnoy’s drum hits much more clearly in the “Z7″ version of “Kayla”. This isn’t a criticism of “Third Stage,” but more of an observation how impactful different lighting and filming techniques can be. But all three concerts feature quality video shots from multiple angles, offering a satisfying concert experience. Ultimately, given that 40% of “Third Stage” is material not available on the previous DVDs, this is going to be a release that most fans will want. Plus, splurging on the beautiful Earbook format offers a wealth of glorious photos (disclaimer: designed by Sonic Perspectives’ very own Joel Barrios). Mention should also be made of a bonus hour-long footage from the Morsefest 2019 performance by Flying Colors (their first show of the tour), available in the Earbook and BluRay versions, which includes additional song “The Fury of My Love”. As for the main show, judging by such capable filming and recording of a top-notch performance, “Third Stage” is a keeper and should bring some consolation to those unable to catch the tour in person.

Representing three strong albums from this colorful band, Third Stage covers plenty of ground thematically, captured with well-mixed audio and well-appointed video. The sold out Shepherds Bush Empire in London is a fitting location to show the love (previous live shows have been recorded at the Z7 and in Tilburg’s O13), and after enjoying this two-hour concert from some of rock’s best musicians, the viewer will certainly be reminded again how special a band Flying Colors truly is.