I will never tire of saying how lucky we are to exist in the same world as Fates Warning. A unit that routinely cranks out material as meritorious as it is multifarious,  these Connecticut exiles owe their longevity and enduring relevance to mastery of their craft, stylistic flexibility, and an unwavering commitment to excellence. That dedication has been on full, unambiguous display for over twenty years, but particularly since Fates Warning broke their nine-year studio silence with 2013’s Darkness in a Different Light, an unapologetically metallic assault that decisively shut the traps of naysayers who complained of the dreamlike ambiance that former drummer Mark Zonder and longtime collaborator Kevin Moore (yes, that Kevin Moore) had woven into the Fates Warning sound over the previous three records. With the unabashedly metal Bobby Jarzombek (ex-Halford, Riot, et al) behind the kit, Jim Matheos and crew redefined the Fates Warning sound yet again, to absolutely crushing effect. All that was left was to adapt the spacier material of X, Disconnected, and A Pleasant Shade of Gray to an ensemble that no longer relied on electronics in the live setting.

Live Over Europe begins with Theories of Flight‘s blistering opening track followed by longtime crowd favorites “Life in Sill Water” and “One,” and it is on these two cuts where we subtly hear how Fates Warning‘s live approach has changed since Zonder left the band in 2005; the infamous electronic splash cymbal on the former is noticeably and tastefully replaced by an acoustic one, and the verses on “One” are interpreted solely by bassist Joey Vera. The band then firmly pummels back into heavier territory with a number of tracks from their two most recent albums as well as “Pale Fire,” from the mostly overlooked 1994 album Inside Out. A truncated “Pieces of Me” also appears in a keyboardless interpretation, which highlights how heavy that song actually is despite the reputation Disconnected has among some fans. The already plenty-heavy “The Light and Shade of Things” highlights the band’s aptitude and fluency in covering a broad spectrum of moods and sounds – light and shade, if you will – without ever straying from their drums/bass/two guitars/voice setup. The band’s absolute dominance of this latter-day masterpiece forgives singer Ray Alder‘s roughness at the high end during the refrain. That roughness, in fact, adds to the song’s desperation and makes this cut one of the live album’s many highlights.

And this is just another territory Fates Warning is quietly conquering: Matheos and crew have consciously eschewed the modern plague of metal bands relying on backing tracks to replicate their music on stage; Fates Warning gives a tacit but emphatic middle finger to such crutches, saying “fuck that nonsense” to legions of lesser bands who will not or simply cannot rely on their professionalism to perform their own music. That approach is embodied on “Wish,” quite possibly the most moving cut in Fates Warning‘s terrifyingly human catalog. The lush sonic landscapes of the original are here replicated solely by the musicians on stage, with no help from any backing tracks, loops, or sequencers. It’s a simple and honest enough approach to live performance that I can’t for the life of me comprehend why it’s not universal. Sporadic use of tracks for strings, choirs, or the like is acceptable, but if your band relies on them in the live setting, you’re cheating. 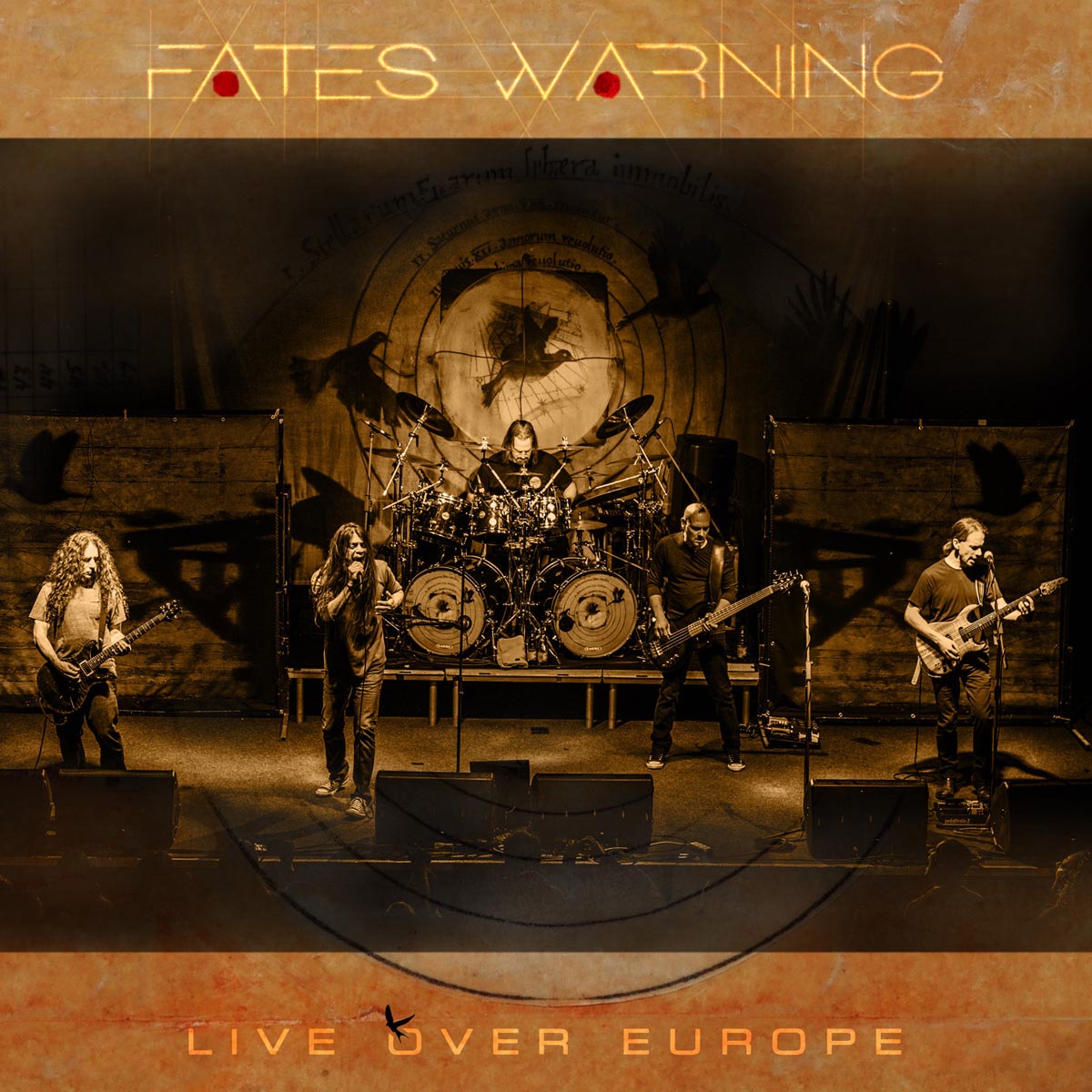 Fates Warning is, however, one of the many bands that openly plays to click tracks on stage. I am personally not always crazy about this – this is, after all, rock n roll – but I am plenty willing to forgive a unit that plays with the urgency and drive that these guys have, especially given their fondness for complex arrangements. Playing to these in-ear metronomes has enabled Matheos to pick and choose individual tracks recorded over multiple nights to assemble what is simply a monstrous performance far greater than the sum of its glorious parts. For example, drums recorded in Athens, a voice recorded in Thessaloniki, a guitar recorded in Ljubljana, and trade-off solos from Belgrade and Budapest might be layered over a bass track from Milan and drums from Rome, and studio master Jens Bogren‘s mixing job is so freaking superb that the listener is convinced that they’re hearing a single live take. It’s a brilliantly simple approach that avoids the compulsion to doctor live recordings in the studio, another far too common way many bands cheat.

It’s also fantastic to hear several pre-Perfect Symmetry numbers get dusted off and updated; Matheos famously went through a spell where he refused to perform older songs, a policy he rescinded around the time Jarzombek jumped on board. (“The Ivory Gate of Dreams” and a snippet of “Prelude to Ruin” did, however, appear on the 1999 live album Still Life). “Silent Cries” benefits greatly from Bogren‘s sonic awesomeness, and Alder‘s cleverly reworked melodies sound more fluid and appropriate than the ball-busting highs of the original recording do. “Acquiescence” gets a similar treatment that sounds light-years better than the Still Life performance, where Alder sounded as if he were damaging his throat while reaching for high notes that were no longer within his natural range. And check out that scream at the very end of the song. So simple, and yet so wow.

The performance of “Nothing Left to Say,” one of the genre’s best-ever compositions, is as tight and powerful as anything else on this set, but it’s on the fifteen-minute epic “Still Remains” where Fates Warning most masterfully demonstrate the merging of their heavier and spacier eras. Once again shunning samples, backing tracks, and even keyboards, Fates Warning reinterprets one of their many classics as a moody, ambient, metal song, with the dreamier elements rendered on guitar and bass. Once again, the simple idea of a band playing its own music on stage is both novel and genius in its austerity.

Live Over Europe thus sounds like the ideal concert performance: arduous, frenetic, intimate, and passionate, all with the added bonus of sounding fucking frightening. This may well rank up there with Iron Maiden’s iconic Live After Death, and there is no compliment higher than that.

Flawless performances, relentless energy, willingness to adapt and reinvent, and strict devotion to the search for perfection are what makes Live Over Europe, Fates Warning's first live album in nearly two decades, the piece of work it is. Fates Warning demonstrate in no uncertain terms that they are a band that knows what the fuck they're doing