They’ve become one with the waves and their past.

All trends come and go like crashing waves upon the shore, but what separates a temporary craze from a legitimate art form with staying power is how well those steadfast representatives of said craft brave the tides of change. Though it is more the exception than the rule that a band completely stick to their proverbial guns and resist shifting sentiments in the public, a core sound and commitment to one’s roots is key in longevity, and the folk metal craze that reached its apex point in the early to mid 2000s is a classic case study in how many of the prime movers foundered in trying to keep their niche style relevant. One can’t help but reminisce upon the massive failure that was Elvenking power/post-hardcore/emo debacle otherwise known as “The Scythe,” which led to a period of gradual recovery that wouldn’t see them getting back to their former glory until 2014’s “The Pagan Manifesto,” let alone Turisas’ 2013 eponymous flop which has seen them yet to release a follow up after seven years.

For their part, the epic folk metal outfit Ensiferum, arguably one of the more innovative figures in the early 2000s, faltered a bit less with a lackluster outing in 2012’s “Unsung Heroes,” but their truly glorious days had largely waned a bit before then with the exodus of highly skilled and charismatic guitarist/vocalist Jari Maenpaa. To those who were taken in by the earliest era of this iconic outfit, every album since has been a series of unsuccessful attempts at recapturing the magic of 2004’s “Iron,” with the highly dynamic and elaborate fourth LP “From Afar” landing the closest thanks to a combination of brilliant songwriting and a stellar foil to Petri Lindroos’ beastly, frostbitten growls in keyboardist and angelic crooner Emmi Silvennoinen. It just seemed that the old truism of Heraclitus that no one can step on the same river twice was defining this band’s career, particularly throughout the 2020s as lineup shifts continued to dog them. However, with the onset of the current decade and the entry of a new dynamic personality into the mix, a massive bonfire has been lit under the back-ends of these Finns, culminating in a grand seafarer’s epic dub “Thalassic.”

To be clear, while Ensiferum’s triumphant 8th studio LP is very much a return to former glory, it is not so much a full on return to the past as it is a newly born seed that fell from the same mighty tree that marked this band’s earliest incarnation. The flavor here is far more bombastic and symphonic after the spirit of recent power metal outings by the likes of Serenity and Orden Ogan, not to mention geared a bit more towards the seafaring shanties end of the Viking paradigm than the former odes to battles on snow-covered landscapes. Nevertheless, there has been a noted shift to a vocal arrangement very close to the one in place when Jari was commanding the ship, ushered in by the addition of vocalist/keyboardist Pekka Montin of old school heavy metal outfit Judas Avenger, who revives the dynamic male clean sung character that has been missing from the arrangement since 2004, while long-running screamer Lindroos continues his role as the forbidding, melodic death metal side of the folksy coin. Suffice it to say, the interplay between these two respective voices is nothing short of masterful, channeling that same brilliant contrast that graced both “Iron” and the eponymous debut. 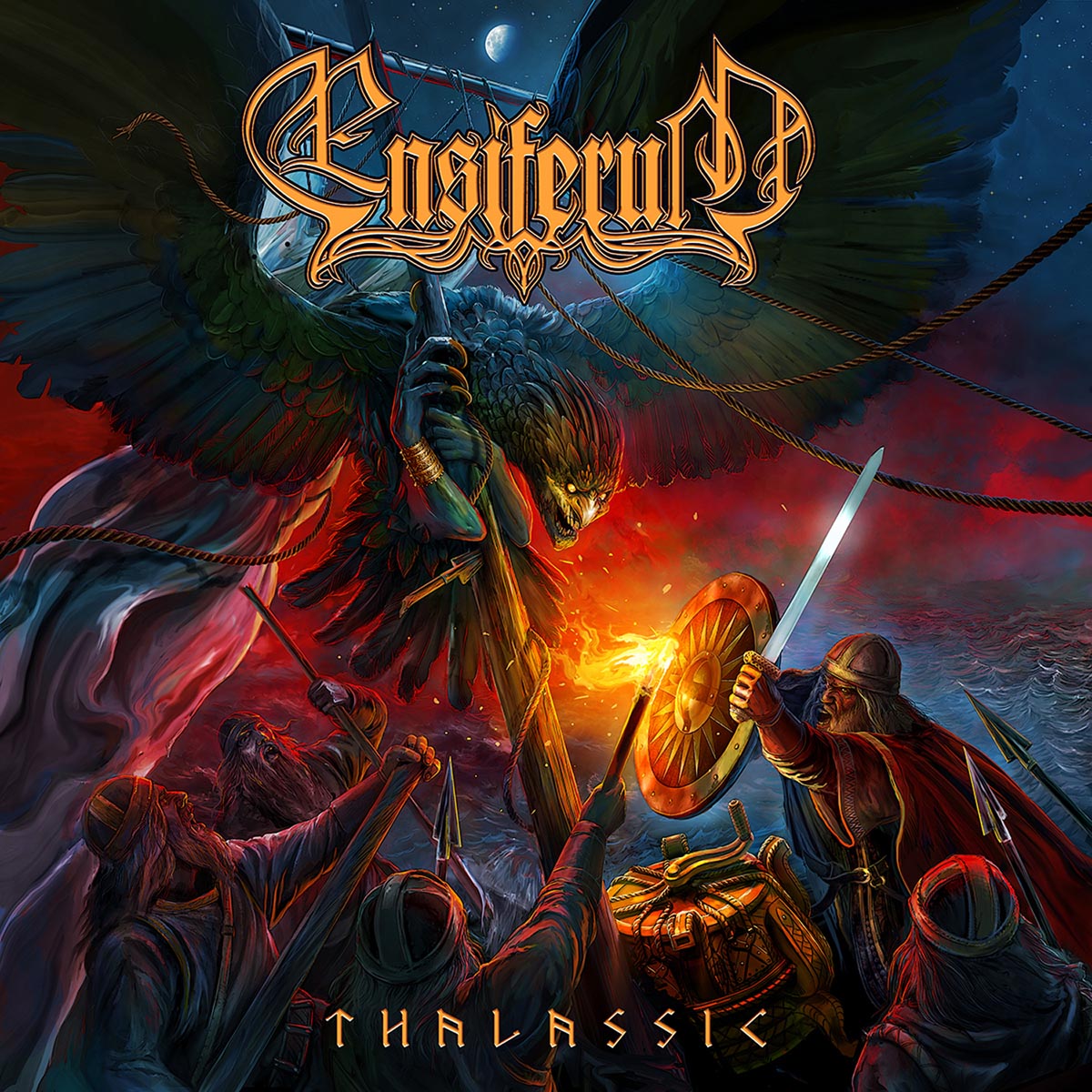 As with the aforementioned classic albums, superior songwriting and a driving feel is what makes this shining opus glisten, and a creaky boat on the high seas with the catchy hum of a lone voice and acoustic guitars, segueing into a mighty orchestral fanfare dubbed “Seafarer’s Dream” makes one of the few subdued moments on here. Immediately after dispensing with said prelude, a deluge of brilliant, fast-paced metallic splendor rushes in to the tune of “Rum, Women, Victory”, one of the more thrashing and aggressive auditory exploits to come out of this band’s arsenal in quite some time. Immediately nipping on its heels is a series of slightly more tuneful yet still swift offerings in “Andromeda”, “The Defense Of The Sampo” and “Run From The Crushing Tide”, which are about as riff happy but in more of a driving, power metal sense and feature a lot more of Montin’s soaring melodies relative to Lindroos’ raging shouts. Things get a bit more nuanced with the slower, Amon Amarth-inspired heaviness of “One With The Sea” and the overtly playful folksy romps “For Sirens” and “Midsummer Magic”, but the energy factor is definitely still in the proverbial stratosphere.

This is a band that has essentially come full circle, like a small company of adventurers returning home after nearly 20 years abroad seeking plunder and distant horizons. They’ve returned to where they began changed, not only due to a few compatriots falling out and being replaced with new comrades, but in their very perception of where they began. This is perhaps best displayed in the closing epic “Cold Northland”, the 3rd part of the Vainamoinen saga, the first two parts being comprised of “Old Man” and “Little Dreamer” on the debut. It presents a group that is equally as competent at their craft, but equipped with more advanced weaponry. It isn’t better or worse than the original, but rather a worthy successor of it, and that is what every stalwart fan of the band who has been disappointed with this outfit’s 2010s output can expect here. This isn’t to say that albums such as “One Man Army” and “Two Paths” don’t have their charms, but where a solid experience was to be had therein, here an unfettered greatness has been unleashed, one that will hopefully continue to do so as the current decade unfolds.

Then is now and now is then, as one of the iconic pioneers of the folk metal craze of the 2000s makes a brilliant return to their olden days with a current sound and a new co-helmsman.