At last, the throwback/retro craze that gained traction in the pop world several years ago with Adele and trickled its way into the prog sphere with that last Haken album was arrived at death’s door. The first release from Testament guitarist Eric Peterson’s Dragonlord since my sixteen-year-old was three, “Dominion” continues Peterson‘s love affair with the keyboard-heavy, classically-influenced black metal of yesteryear, when album covers routinely featured the aurora borealis and Mayhem drummer Hellhammer‘s main side-band hadn’t yet altered its spelling or its dress code.

True to Dragonlord form, “Dominion” maintains a vibe and approach much like “Nexus Polaris” and “Aspera Hiems Sinfonia” did in the 90s, summarily adding a Bay Area sensibility that those Northern Viking Metal dudes who gifted us mortals with those masterpieces simply lacked (through no fault of their own); the vastly  expanded sonic landscape “Dominion” offers is merely the snow accumulation on the ice shelf. Dimmu Borgir this aint, y’all, and while that in and of itself isn’t a good thing (“Eonian” is a damn good time, yo), it must be stressed that while both Dragonlord and contemporary Dimmu share common ancestors, one did not beget the other, and they are certainly not the same species.

“Dominion” kicks off with the obligatory symphonic instrumental intro and quickly reminds us that we’re dealing with a beast descended from the traditions of early Covenant and Arcturus; the title track that segues from the appropriately-titled “Entrance” is a case study in how the classic symphonic black metal sound of the 90s can be both relevant and built upon some twenty years after its emergence from the primordial soup of Norway’s black metal underworld. Keyboard strains both varied and familiar weave in and out of Peterson‘s ferocious guitars and amorphous time signatures, while his more than capable shrieks add to the chill that such a beastly bastard of both beauty and brutality inspires in the listener. Any doubts about Eric Peterson‘s black metal cred that somehow survived even 2001’s “Rapture” are surely shredded by this point.

“Lamia” later reasserts Dragonlord‘s symphonic roots with its keyboard-heavy and almost upbeat delivery, and it is also where Canadian Celtic metal wünderchick Leah makes the first of her mesmerizing appearances on this album; though her choral delivery at the song’s climax eerily adds to the dramatically changed mood after the interlude, it is her simple monosyllabic lilt that truly elevates the mood. The equally simple act of harmonizing that melody by thirds takes “Lamia” over the top, making it an appetizer that rivals the main course.

Despite its predecessor’s excellence, the undisputed centerpiece of “Dominion” is the epic “Love of the Damned,” a woeful tale of a doomed love affair where Peterson shows off his clean-singing ability. Masterfully placing Lyle Livingston‘s haunting orchestral effects where they have the greatest impact (ie, minimally), this mid-paced, mostly-clean guitar journey reaches the last of its summits with Leah‘s subdued yearning at the final verse. “Love of the Damned” exemplifies how a metal ballad can be the most effective ballad in the world of popular music: like a skilled lover, it doesn’t reveal what’s in store early, quickly and tactlessly. Rather, it gently waxes, wanes, and waxes some more until the seduced suddenly realizes how atypical this particular ride is. How appropriate that it lasts nearly double what many country ballads last (5:33) without the listener even realizing it. 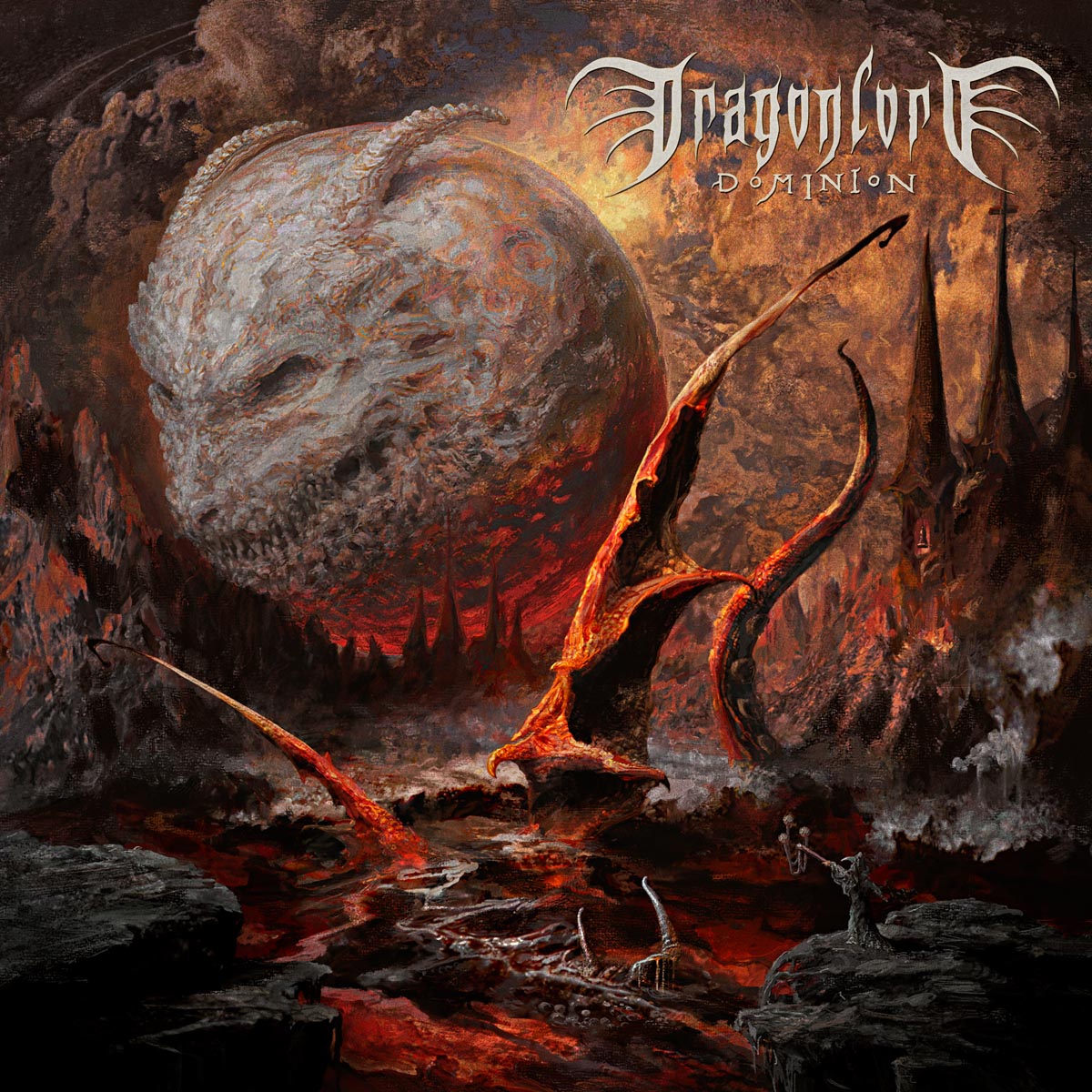 The history lesson called “Northlanders” and disguised as a nod to Therion follows; featuring some startlingly synthesized brasses and strings as well as Ms. Leah‘s skilled choral singing, “Northlanders” is a seven-minute foray vaguely reminiscent of “Wine of Aluqah,” and symphonic metal connoisseurs know that this can only be a favorable comparison. A twisted take on Tolkien’s The Silmarillion follows in the form of “The Discord of Melkor” before the album closes with the cool-as-fuck “Serpents of Fire,” whose thashy second half will have you swearing Peterson‘s Testament bandmates made a special appearance.

Throughout, “Dominion” boasts positively stellar, crisp, and crystal-clear production, especially on drums and guitars… and about those drums, Trivium skin-basher Alex Bent‘s performance cannot be understated. Say what you will about his main band, but the man is a monster drummer, and his impossibly perfect performance on “Dominion” might be the single element that takes this fantastic record over the top; if his simple but insanely catchy work at the top of and throughout “Ominous Premonition” doesn’t win you over, I suggest you spend some time with a drum pad and a metronome.

For a while it did seem that Dragonlord was trying to compete with Cynic and Watchtower in the “longest gap between albums” contest; fortunately, Peterson found time in his busy schedule to remind us that not only can the old still sound fresh, it is still very possible to make crushing metal with guitars tuned to E-flat (rather than F-sharp, almost an octave below). While the work of eight-string players like Ihsahn is too good to ignore, Peterson seems to have inadvertently reminded us that simply because the current path is good, that is no reason to abandon the path of olde. Totally recommended.