Spurred by the imaginative depths of darkness and decades of musical experience, Die Kreatur emerges as the latest creative avenue for two well-established names in the German music scene. The combined efforts of Dero Goi of Oomph! and Chris Harms of Lord of the Lost have produced the band’s debut album “Panoptikum,” a diverse and dynamic approach to dark rock for the modern era. Die Kreatur is a seamless merger between Neue Deutsche Härte and gothic rock, blending the two styles with bright electronic melodies backing the flawless vocal chemistry of the two front-men. Containing a fiery momentum of non-stop excitement balanced with the sultry tension of dusk, “Panoptikum” is a debut worth paying attention to.

It is inevitable that any band daring enough to channel their creative energy through this musical zones must contend with Rammstein’s daunting shadow, the indomitable titans who have climbed to worldwide acclaim. However, it stands to mention that it was in fact Oomph! that paved the way for Neue Deutsche Härte with their formation in 1989, five years before Rammstein would find their footing. It appears that Dero stands undeterred by such outside influence: Die Kreatur embraces the tenets Oomph! has used to bolster their style for years, including heavy influence from electronic and pop-rock to form rhythms that are infectiously irresistible. These brighter notes stand out against the darker tones contributed by Harms’ rasp and gothic imagery that wrap “Panoptikum” in a veil of shadows, the initial monochrome splintered by tandem vocals that shift in near perfect sync. The energy throughout “Panoptikum” is explosive, with slower songs such as “Durch Die Nacht” carrying the momentum from its brightest moments by using a full-bodied sound and intense vocal inflection.

Though Die Kreatur draws heavily from its founders’ main projects, there is no question that the identity they forge in the album stands as a unique combination of the two, striking middle ground in a perfect balance between electric light and darkness. “Kalter Als Der Tod” was the band’s second single, and features a music video which sees both Dero and Harms effortlessly embody darkness as they take on the role of two red-eyed vampires, staring directly into the camera as they growl the lyrics with a throaty abrasiveness. As both vocalists stand with crimson blood dripping from their lips, their cold expressionless delivery perfectly encapsulates the spirit of “Kalter Als Der Tod” as well as the rest of “Panoptikum.” Hanging in the balance between haunting and seductive, the album’s gothic intrigue captures the best of its creators’ charisma. Die Kreatur is the result of two vocalists coalescing to enhance one another strengths, and it also shows expertise and caution in songwriting that utilizes a perfectly balanced combination of guitars and keyboards. “Panoptikum” offers a high degree of versatility and broad dynamic range through the flawless chemistry between these instruments, the melodic backbone of the album coming from their effortless dance. 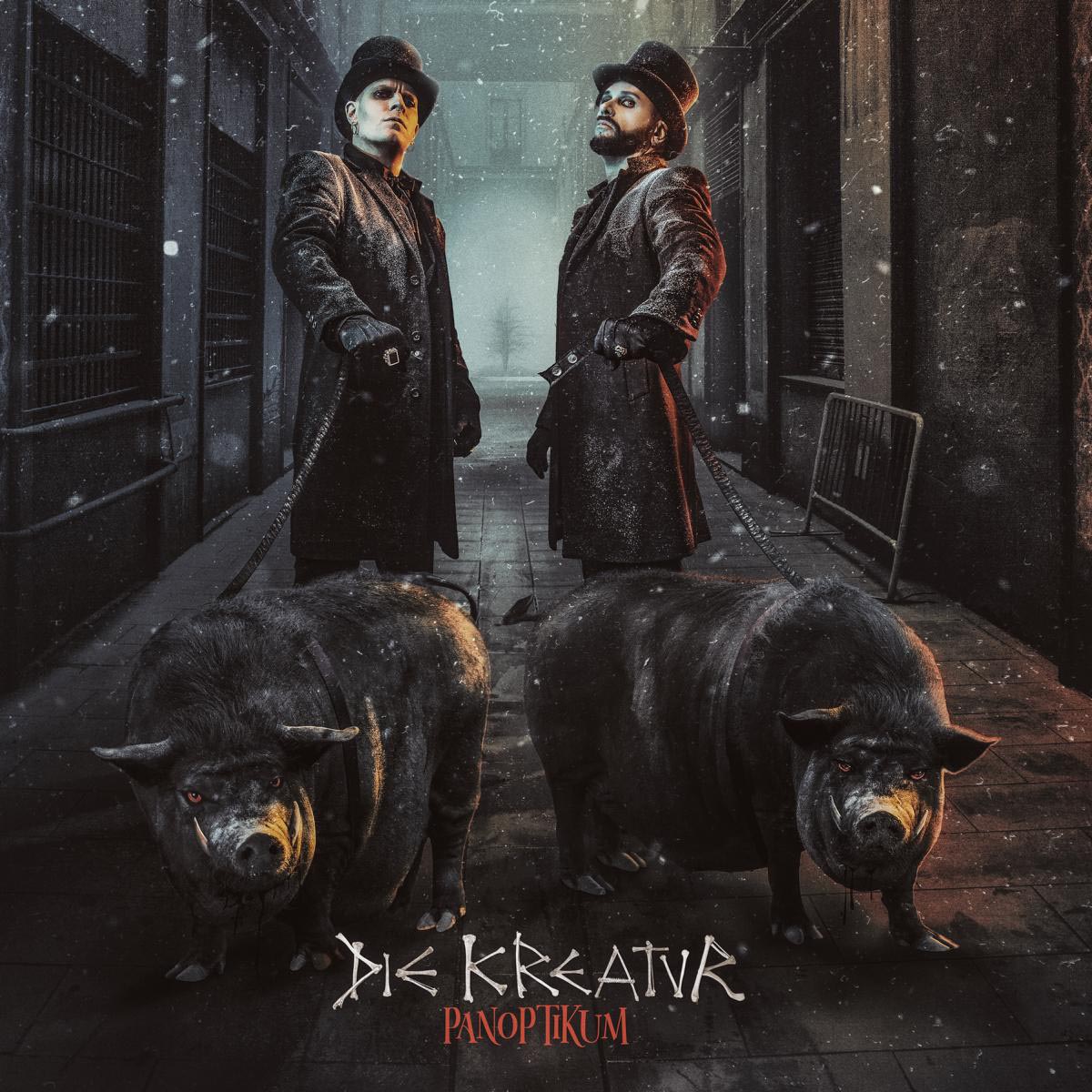 From the funerary waltz of “Schlafes Braut” to the sharp kick of “Untergang,” Die Kreatur covers the gamut in song structure and composition. No two tracks are identical, but each harnesses some intonation of the gothic or macabre, including the haunting fog of “Durch Die Nacht” with its soothing clean vocals. Contrast against the growls and shouts of “Benutz Mich,” Harms and Dero show their multi-dimensionality with vibrant abandon, unafraid to lean into the metallic bite of a guitar just as much as Die Kreatur pushes a dance-heavy electronic beat with soaring synth. The divide between these two sides of Die Kreatur is never too stark, with many songs including a combination of pop flavors with an edge that only a master of darkness like Harms could bring to the table. Tempo is also held in a near constant flux, “Kalter Als Der Tod” giving way to the irresistible urge to head-bang while later tracks slow to a near ballad drenched in ominous shadows.

Die Kreatur is the result of musicians of the highest order, able to entertain effortlessly and maintain a consistent sound through an impressive amount of stylistic variation. Even without the impressive visuals from the horror-themed music videos, listening to “Panoptikum” calls up images of haunting vampires beneath the cloak of Neue Deutsch Harte, flashing fangs across the dynamic background of synthesizers working in flawless rhythm. this album is clearly the result of passion for the craft and dedication, not some mere side project to feed off the egos of well-established musicians. Never losing the identity of its founders, Die Kreatur seem to have already found themselves in a debut which is as impressive as it is exciting to indulge in.

An upbeat and unique combination of Neue Deutsche Harte and gothic rock, Die Kreatur forges ahead with the full might of acclaimed German vocalists at the helm. Full of energy and the spirit of macabre darkness, “Panoptikum” strikes a sharp balance between light and dark that captures listeners with its infectious melodies and irresistible choruses.