Though they may come from the land of the rising sun, the death metal masters of Defiled bring nothing but darkness and technically adept brutality in their latest opus “Infinite Regress.” Stripping death metal down to its bare bones, there is a rarely found sonic purity in their sound that balances a ruthless grit against a sense of unbridled excitement to create an album that is as enthusiastic as it is aggressive. The three years that spanned from their prior release “Towards Inevitable Ruin” were well worth the wait: Defiled have returned triumphant and with a clear sense of direction, growth, and creative potential infused into each of the fourteen tracks.

From the moment the album begins, it is clear that Defiled has a number of objectives they wish to accomplish in their songwriting and production, delivered in short, readily devoured soundbites. Modern tastes seem to favor nothing but breakneck speed across both percussion and strings, but “Infinite Regress” is unafraid to play with tempo, and even more importantly, with bold moments of halting silence. There are passages where the drum cuts for the guitar to shriek with an onslaught of haunting notes, letting the bass rise above a percussive thunder to incorporate its own bite of furious retribution. No two tracks are identical, some leaning on a vocal-led approach, others using a careful arrangement of instrumentals to build the chilling atmospheres that Defiled seem to craft so effortlessly. Each twist and turn brings a new and dramatic approach to the classic and much beloved sound of pure death metal.

On the shorter end, there are songs such as the thrilling chase of “Systematic Decomposition,” which brings the fire-forged abilities of founding guitarist Yusuke Sumita to the forefront. Though the track does not rely on sheer complexity of songwriting to make its mark, it combines a gradual amplification in speed and technicality across both guitars and drums to mount tension and excitement for some unseen future climax. The build is tantalizing, vocals serving as fuel to a pyre of speed and brutality that rises in speed and skill with each passing breath, until the song abruptly comes to an end just seems to truly hit its stride. “Systematic Decomposition” is impossible not to get lost in, the listener becoming part of the hunt for something faster, stronger, more fierce. Each half-second where instruments halt altogether are akin to the sensation of one’s heart skipping a beat: terrifying in that moment of absence, but rewarded with an injection of pure adrenaline. Clocking in at only two and a half minutes long, Defiled have still managed to paint an adventure in its entirety, without compromising demonstrations of skill and visionary songwriting, yet still manage to leave the listener wanting more. 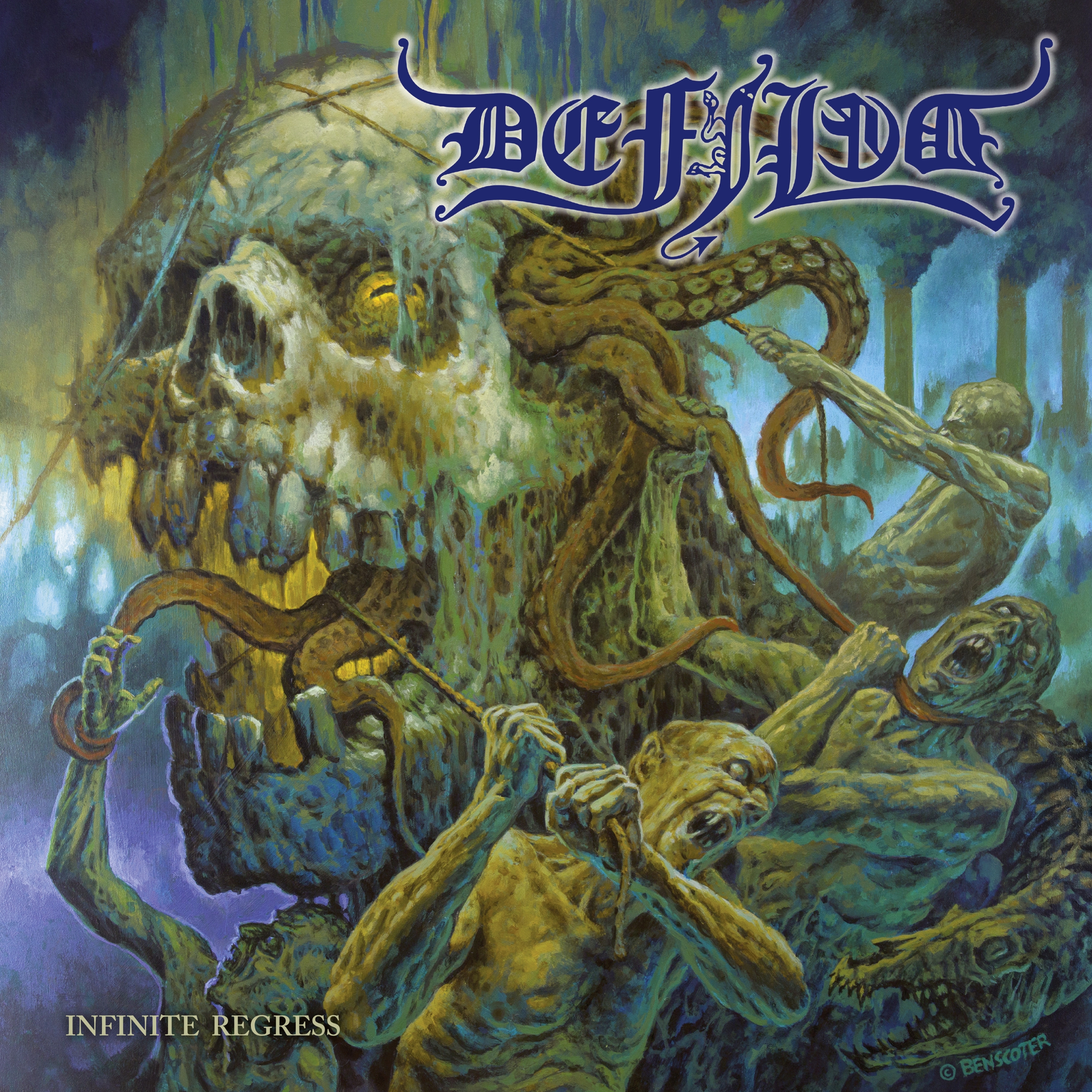 The variety of the album is yet another one of its strengths: though many tracks do come in under the three minute mark, there are longer tracks that explore some of the foundational death metal stylistic choices, allowing the tempo of the song to slow and infuse with the distortion of abject desolation between the thrilling moments of surging guitars and clashing cymbals. Third track “Tragedy” surpasses five minutes in length, opening with a tantalizing hook of Sumita’s guitar against an expanse of nothingness, coiling around the listener like a snake ready to strike. Just as in many of the other tracks on “Infinite Regress,” “Tragedy” allows the instruments to establish the atmosphere far before vocalist Shinichiro Hamada introduces his caustic screams. Such decisions in songwriting show a dedication to not just technical ability, but true care in creating an album that was both balanced and comprehensive in its scope.

Though Defiled have gone through a number of lineup changes since the band began in 1992, “Infinite Regress” is a beautiful display of musicianship that emphasizes cohesion among its members. Though the songwriting makes clear decisions to exchange which instrument leads a given track, some propelled by a cascade of drums, and others by a wall of riffs, the mixing also takes care to never drown out any given musician. While Hamada’s vocals are certainly strong enough to become all-encompassing were they given the opportunity, they never outpace the given strength of the guitar or bass. Rather than fight with one another, Defiled displays a stellar showcase of teamwork, and a combination of songwriting and production that is intended to uplift those talents in turn. In both songwriting and arrangement, Defiled seems to focus on driving an image of near idyllic harmony across vocals and instruments as they lay waste to peace in their unique brand of metal.

Each track has its own undeniable merits, but ninth track “Aftermath” is a gem that manages to capture many of the stylistic decisions across an incredibly diverse album. An opening that feigns a desire for nothing but pure speed cuts away unexpectedly, allowing the raw and unfiltered strength of strings to dominate the atmosphere. A bit of hollowness is left with the listener as the initial thunder fades, but is filled instead with a carefully paced resonating series of riffs, not overly complex in their execution. Just as soon as the listener has settled into this new routine, they are plunged once more into an unforgiving onslaught of howling screams and blistering bass. Defiled seem to never overstep into the realm of intensity that would make a song too suffocating, nor back off so much that the listener is left wanting. Their ability to determine the energy that is “just right” for any given score is simply uncanny.

Entirely unforgiving, and as bold as it is true to the classic sounds of death metal, “Infinite Regress” is a valuable addition to the collections of anyone that loves death metal that is as well-composed as it is brutal. The members of Defiled have created a work of art that relies on their understanding of each musician’s strengths, a song structure that holds listeners in unforgiving rapture, and a ravenous hunger for darkness. As artistic as it is unforgiving, “Infinite Regress” is an opportunity to experience music without compromise, fueled by a sense of unstoppable euphoria.

A display of superb musicianship and a laser focus on brilliant songwriting, “Infinite Regress” will sate the hunger for speed and brutality that burns in the heart of any old-school death metal fan. Defiled is sharper than ever in a release that shows maturity, intention, and untouchable skill in every possible dimension. Captivating without compromise, this album delivers the perfect dose of annihilation with a near euphoric bliss