Capturing a rainbow in sound alone may seem impossible, yet it is a feat achieved in the full vibrance of the sun by instrumental rock band Covet. Their sophomore album “technicolor” lives up to its name with a diverse offering of tracks that see the trio traversing the full color spectrum, embracing unique textural effects and playing styles to create their sonic identity. The primary feature of “technicolor” is its idyllic peace, for though the band certainly embraces a number of heavier moments, a vast majority of the album is crafted with the same serenity as watercolors. Darkness and light are both necessary for a final product which shines through in joyous bass and distinct picking from guitarist and front-woman Yvette Young. Striking a harmony between the harsh potential of an electric guitar and the warm glow of natural beauty, “technicolor” traverses the many hues of the human heart.

Covet has grown by leaps and bounds in the two years since their debut album “effloresce,” embracing not just a greater diversity in their song structures, but also adding new thematic elements that grow their identity beyond the boundaries of math rock on its own. Such flourishes include the orchestral accompaniments found in “odessa” and the band’s first sparing use of vocals in “parachute.” Short and melodic verses from Young serve as a timely compliment to the brilliance of her guitar, also appearing on closing track “farewell” for a few brief moments. While adding even a handful of lyrics to a project rooted in instrumentalism was a risk for the group, it is a risk which certainly paid off. Young’s tone matches the overall atmosphere which Covet has created, and appears briefly enough that it never overpowers the complexity of the instrumental arrangements. The early introduction in “parachute” makes the surprise one which is not just well-timed but welcome, following shortly after the beautiful sunrise of sound in opening track “good morning.”

Math rock and instrumental bands aren’t known for their instant accessibility, but the writing of “technicolor” has made it a great choice for listeners of all genres to open their hearts to its magic. “Technicolor” comes across as less of an express attempt at storytelling, but rather a chance to explore emotions and atmospheres as standalone concepts. The eager pull of “atreyu” mimics budding jubilee, where the darker tides of “nero” paint a picture of hesitation and nervous excitement. It’s easy to lose oneself in the mounting tempo of “aries” or the rhythmic shores of “predawn” in an album that has no sharp edges. Covet is unafraid to tackle these emotional themes with tracks that span anywhere from just over a minute to almost seven, taking care to ensure the variety and rhythm within each track compliments its overall image. 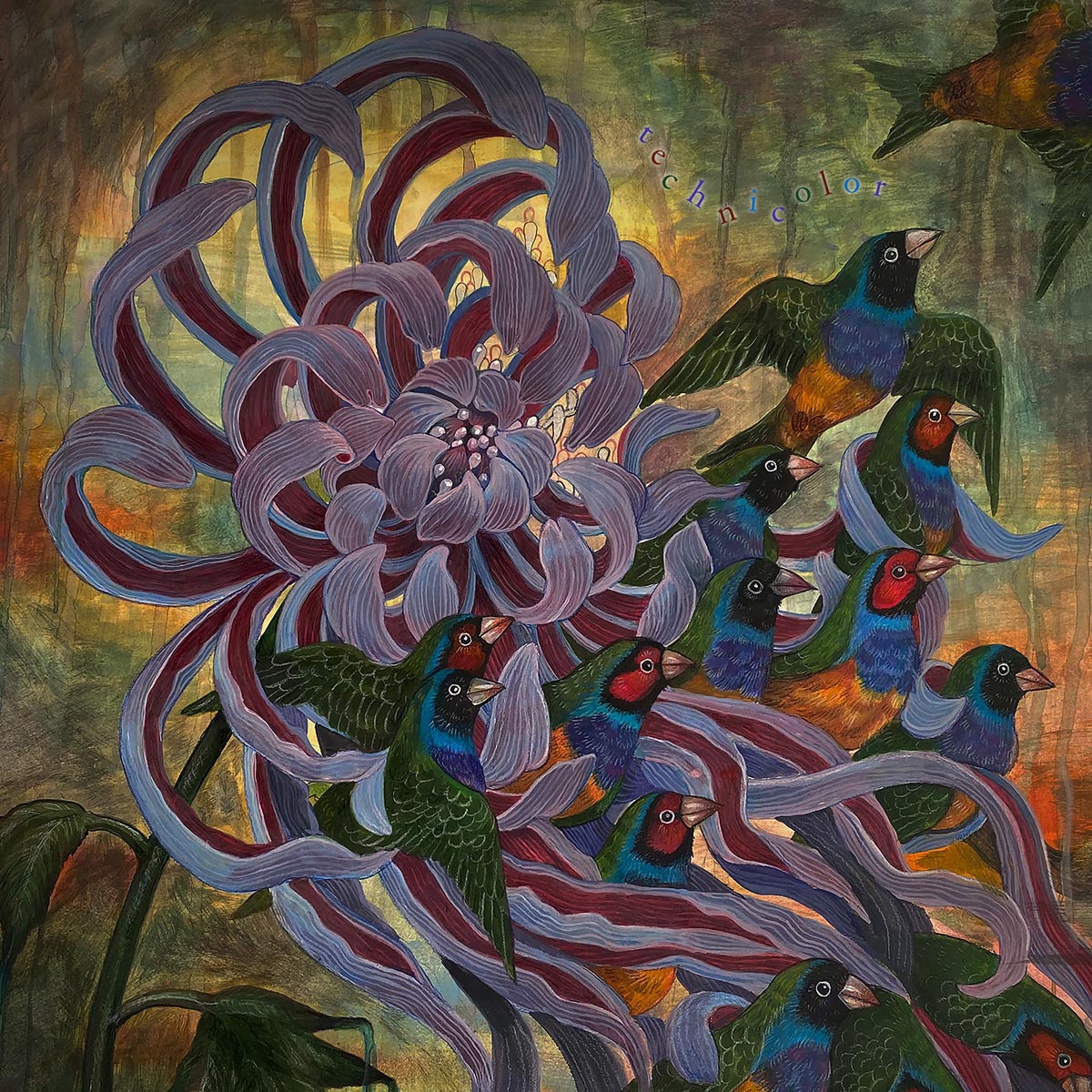 Young’s guitar and the many pedals used to create the ethereal soundscape of “technicolor” may often take center stage, but David Adamiak’s bass is not without its standout moments. Keeping the deep timbre of “parrot” on track, the bass emerges from a dreamy near-static like a laser cutting through thick fog, and helps guide “nero” as it tangles with the flavours of jazz. Complimentary more often than soaking in the limelight, Adamiak’s role seems sometimes as more of an afterthought than an intentional pairing to the virtuosic strength of Young’s lead. This is how the entire album progresses, in that it was born of being spontaneous and driven by a dream to create, rather than intentionally striving for a particular sound or destination. While experimentation has certainly lent itself well to the transient atmospheric arrangements and composition which implores the listener to self-reflection, it still seems as though Covet has yet to find themselves a sound or style they can claim as uniquely their own. Much of their identity is derived from their playing style and mix as opposed to the actual ambitions which carry their sound to fruition.  As much as having no formula has given this album its strength, it also shows a youthful project that is brimming with talent but no point on the horizon to run towards.

Just as a ray of light can be fractured into a rainbow, “technicolor” is the result of an electric guitar painting atmospheres with countless aural pigments. Unique styles of picking and a number of pedals used for effect elevate the changing tempos and unorthodox structures of this almost purely instrumental act to something even more dynamic. Just as the sun rises and sets on a summer day, “technicolor” is versatile in not just its stylistic diversity, but in its abilities for listeners to find either escapism or introspection within its warm embrace. Given that this is their second full-length album, it makes sense that Covet has left the door wide open for a future where they have unlimited potential to change and grow from their current state. No matter what direction the future takes, “technicolor” is a perfect choice for embracing a balance between technical achievement and ethereal wonder.

Covering a range of styles from the engaging to the purely ambient, “technicolor” entrances listeners with an effortless tranquility and indescribable hues as Covet marks the next chapter in their story.