Once more unto the enigmatic breach.

Being the new kid on the scene does not preclude one from being fast-tracked to veteran status, even when your highly impressive track record only reaches back a little over 5 years ago. Such is the status that any thinking man would convey upon the New York-based death metal with a progressive edge outfit Contrarian, a band that makes such persons their target audience. Having already hit the ground running with a string of inventive albums that both recall the glory days of death metal’s progressive stint in the early to mid 90s and builds upon it, not the least of which being their impressive showing on “Their Worm Never Dies” just last year, one might think that this highly ambitious quintet would stop for a respite. Naturally one would be wrong in doing so, as in the closing weeks of this tumult-dominated first year of the 2020s they’ve outdone themselves with another solid studio entry.

As with prior offerings, this band’s fourth studio LP “Only Time Will Tell” is a thought-provoking excursion into philosophical inquiry, told through the lens of conceptual storytelling with a highly fantastical plot. To the rank newcomer, the cloaked and hooded figure often adorning this fold’s album art is actually progressive death metal’s answer to Orden Ogan’s Alister Vale, namely an enigmatic mascot dubbed “The Cloaked Contrarian” who functions as the protagonist of an ongoing storyline. This installment sees the inquisitive character embarking on an adventure via time travel, seeking absolution and fulfillment outside of his native place in history, and the accompanying music mirrors this lofty and vivid undertaking. Truth be told, this is an album where the concept serves to explain the meaning behind the genre-bending excitement and technical gymnastics, but also takes a backseat to them as well.

Where this album finds itself diverging a bit from Contrarian’s past works is a greater degree of consonant melodic interplay and a somewhat swifter pace that corresponds more to the latter days of the original progressive death heyday. It still bears a strong similarity to the seminal offerings of Atheist and Pestilence, but put into more of a melodic adjacent packaging that reminds heavily of Death’s 1998 swansong “The Sound Of Perseverance”. In fact, the most notable deviation from the late 90s classic in question here is that vocalist Cody McConnell has a deeper and more orthodox guttural barking style that sounds closer to early 90s Chris Barnes rather than the glass-shattering shrieks Schuldiner was belting out just prior to his Control Denied project emerging. But the vocal work proves to be the most static element at play here, as the jarring looseness of the drumming, the Sadus-inspired bass noodling and busy guitar work continually steal the show. 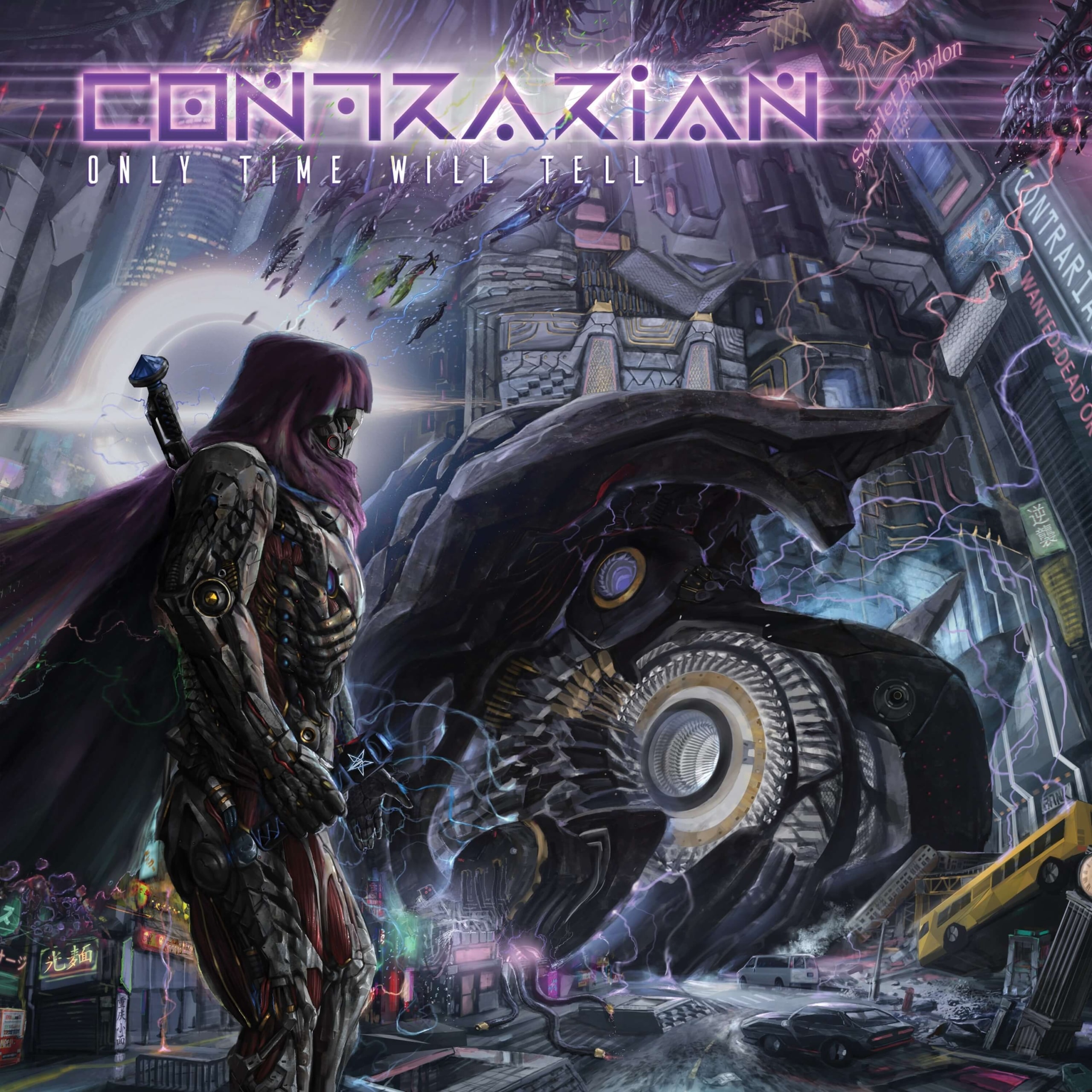 “Only Time Will Tell” Album Artwork

All inventive ventures begin with the familiar, and this album proves to be no exception. The opening crusher “In A Blink Of An Eye” lays down the odd-timed mayhem like it’s been lifted fresh off the death metal press circa 22 or so years ago, leaning in heavy on the dueling guitar harmonies and busy riff work like an exaggerated answer to several select faster offerings, yet also throwing in a few curveballs like a fleeting organ line in the song’s closing moments. Then again, the similarly elaborate “The Final Hour” vacillates between a grim chaotic assault and what could almost pass for a few triumphant power/progressive moments. As things progress onward, things almost seem like they want to veer into quasi-melodeath territory, notably during the lead guitar dominated moments of “Case Closed” and that almost cleanly tonal gruff vocal segment on the shred happy extravaganza “Scarlet Babylon”. Perhaps the greatest stylistic deviations are the two ambient-tinged interludes “Beat The Clock” and “Only Time Will Tell”, which are notably trippy and really bring draw out the album’s cosmic character.

Time isn’t the only thing on this album’s side, though it is interesting to note that despite its highly elaborate stylistic inclination, it is a notably concise and compact offering at just less than 35 minutes, in keeping with its 90s death metal influences. It does finish things on a grand hurrah of an epic closer “Your Days Are Numbered”, which recalls some of Schuldiner’s early progressive strides on “Spiritual Healing” in the guitar work, but the rest of what occupies this opus gets to the point with time to spare. Relative to its predecessors it comes off as more inspired largely by avoiding keeping the energy level high and having a clearer separation between periods of quieter reflection between the moments of technically apt mayhem and occasional brutality. One might be tempted to hope for time travel to become a reality so that this band’s next outing can be heard all the quicker, but this is the sort of album that makes one appreciate the present and long primarily for future replays, especially for those wanting some vintage 90s nostalgia to go with their forward-looking progression.

“Only Time Will Tell” Track-listing:

Forging a new, thinking man’s approach to death metal with an eye to the progressive leaps the sub-genre made in the early to mid 1990s, Contrarian hits pay dirt with a broad-minded excursion into the fantastical, with an emphasis on time travel and personal discovery