They once again make them like they used to.

In this present age of miraculous comeback stories, a consequential band from a bygone era getting back into the swing of things as though they’d never left is still a rare occurrence, particularly when the consensus dictates that said band’s heyday was more than 30 years ago. Such is the story of California’s black sheep of the heavy metal family Cirith Ungol, a band that paid their dues and developed their sound in the 70s during metal’s more hard rocking days, only to not truly hit their footing until well into the 80s where their sound would clash noticeably with the glam crowd of the Sunset Strip and the thrashers of the Bay Area. It would be an understatement to say that the majority of metal’s fan base of the day that saw epic, doom-laden opuses in “King Of The Dead” and “One Foot In Hell” unleashed didn’t fully appreciate or even really comprehend what they were hearing, to speak nothing for the label and production personnel that unwittingly caused the band’s initial demise, but 2020 is a new year with an audience that is all the wiser.

To the uninitiated, the brand of old school flair that this band deals in has an unapologetically retro character to it, and did so even at the time when they were at their creative peak. Though presenting largely as an early 80s epic heavy metal act with an eye for literary fantasy that dovetails quite closely with the seminal works of Manilla Road, Brocas Helm and even Manowar at times, they’ve always stood apart by having far more of an overt 70s rock character that points noticeably to the exploits of Black Sabbath, Thin Lizzy and Dio-era Rainbow. The release of their newly forged LP “Forever Black” sees this tendency not only continued, but accentuated to the point of sounding even more 70s-influenced than their 1981 debut “Frost And Fire”. While much of this owes to vocalist and over-the-top impresario Tim Baker unleashing a truly wicked performance still indicative of that exaggerated Brian Johnson rendition he brought forth in the old days, the re-acquisition of original mastermind and multi-instrumentalist Greg Lindstrom is the most auspicious element in play, and his impact on the songwriting is impossible to miss.

Everything about this album speaks to a quintet of musicians who are still living in the same era that birthed them; a fitting eventuality given that the past several years has seen the ongoing rise of a number of prominent retro bands sporting a similar sound. From the very onset of “The Call”, the visual of a lone, sword-wielding warrior trudging the endless wastelands becomes apparent as a lone horn call and distant wind gusts give way to a march of military snare rolls and haunting guitars, and the promise of a mighty sonic battle isn’t far behind. Firing on all cylinders emerges a galloping fit of old school rage in “Legions Arise” that listens like a more amped up descendant of “Blood & Iron” with a slightly less shrieking vocal display. This riff-happy and fairly compact anthem points to the more streamlined version of this band that emerged on “One Foot In Hell”, and is not alone as driving yet slightly less chaotic anthems such as “The Fire Divine” and “Before Tomorrow” see a fairly straightforward rocking formula with some catchy hooks carrying the day. 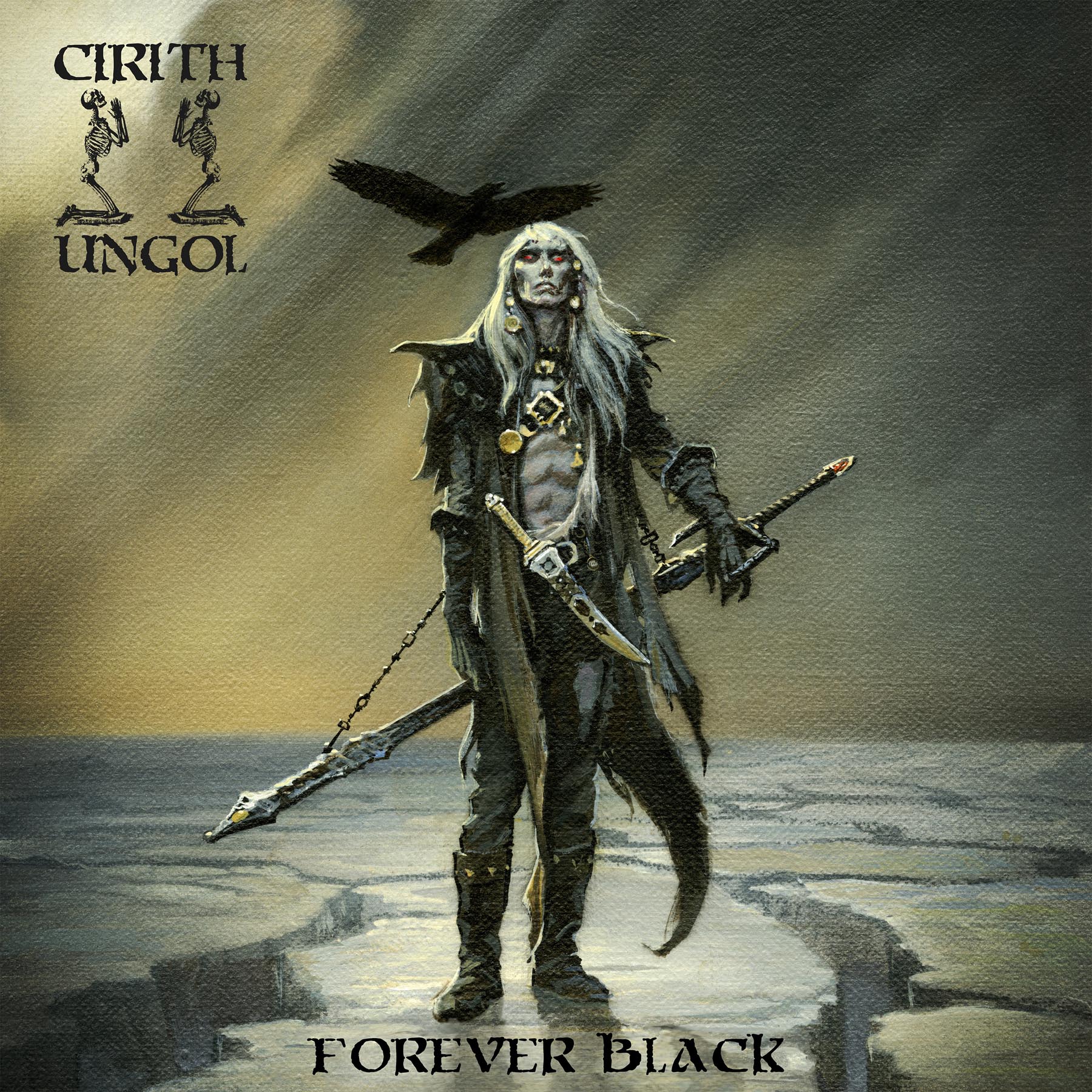 Then again, Cirith Ungol is not a band that lives only by moderate length bangers alone, and makes a few auspicious occasions to mix things up and bring their epic side to the fore. True to their affinity for classic doom tropes, the slower paced “The Frost Monstreme” proceeds from a dank march of heavy guitar work into an up tempo homage to “Electric Funeral”, complete with a correspondingly retro bluesy lead guitar display. A similar, more mid-paced nod to Black Sabbath is found in the title track “Forever Black”, resting somewhere between a slower “Children Of The Grave” and a quicker “Snowblind”. Truth be told, the vast majority of the guitar solos found throughout this album have a far more blatant Toni Iommi vibe to them than this band’s seminal 80s offerings. Even lofty semi-ballad offerings like the Manowar-tinged “Stormbringer” see this traditional blues rocking sentiment permeate its dense, atmospheric fringes. When this tendency is deviated from, it is often in favor of fleeting harmonized leads reminiscent of a UFO and Thin Lizzy as occur on the otherwise stomping doom machine “Nightmare”.

It’s a given that the small yet very committed flock of core fans that were hoping for the Cirith Ungol of the mid-80s to make another appearance before all was said and done will be quite satisfied with this, as it all but could have been released a year or two after “One Foot In Hell” hit the shelves in 1986. The formula is one of unapologetic nostalgia, and is sure to be a welcome listen to the growing number of traditional metal enthusiasts in the current generation who proudly showcase their Slough Feg and Eternal Champion t-shits and patches. Likewise, much of what is heard on here could pass for the album that Black Sabbath should have released back in 1998 when they originally reunited with Ozzy and opted to keep everyone in suspense for 15 years before finally offering up a tired, bland rehash of their glory days. The decade may change, but the golden glow of a classic array of Michael Moorcock-inspired heroic tales set to heavy metal music with the art of Michael Whelan along for the ride will never lose its luster.

Pre-order your copy of “Forever Black” from this location.

The murky abode of the long dormant queen of spiders has once more become active, ushering in a crushing old school blend of Black Sabbath sensibilities, 70s progressive and hard rock swagger and early 80s epic splendor to put the younger generation on notice