Phil Hall, perhaps best known by his humorous stage alias Land Phil, has managed to keep himself quite busy of late, splitting his time between bass duties on his flagship thrash/crossover project Municipal Waste alongside retro-80s political hardcore act Iron Reagan and arguably his most brilliant creation and death metal parody act Cannabis Corpse. While none of these projects could be qualified as slouches by any standard, it seems that this bassist turned death growler has developed a greater degree of devotion to the last of the three aforementioned projects, often to the point of rivaling his objects of playful derision in the musical department. This has become particularly apparent over the course of their most recent output, as this band has evolved from being a similar Cannibal Corpse tribute and parody act to something more stylistically diverse, and the release of their 6th full length studio album “Nug So Vile”, a rather clever play on the sophomore album of Cryptopsy no less.

Relative to this band’s previous output, this album still falls into the general paradigm of Cannibal Corpse emulation, though it has taken on a far more technical edge that could best be related to the highly agitated and flashy character of albums such as Bloodthirst and Gore Obsessed, rather than the more methodical demeanor of the Chris Barnes era. For his part, Phil does a highly competent job of not only effectively mimicking the inhuman barks of Barnes and Fisher, but also makes occasions to throw in a few more archaic throaty shouts that have more of an Obituary flavor to them and even the occasional incomprehensible brutal gurgle as a less than subtle nod to Lord Worm. His bass work and the blast-happy mayhem of Josh Hall’s drumming are likewise worthy of corpse-led devotion, but interestingly enough, guitarist and newcomer Adam Guilliams ends up stealing the show with what could be best described as a truly breathtaking display of frenetic riffing and wild virtuoso guitar soloing that could rival Pat O’Brien or Jon Levasseur on their best days. 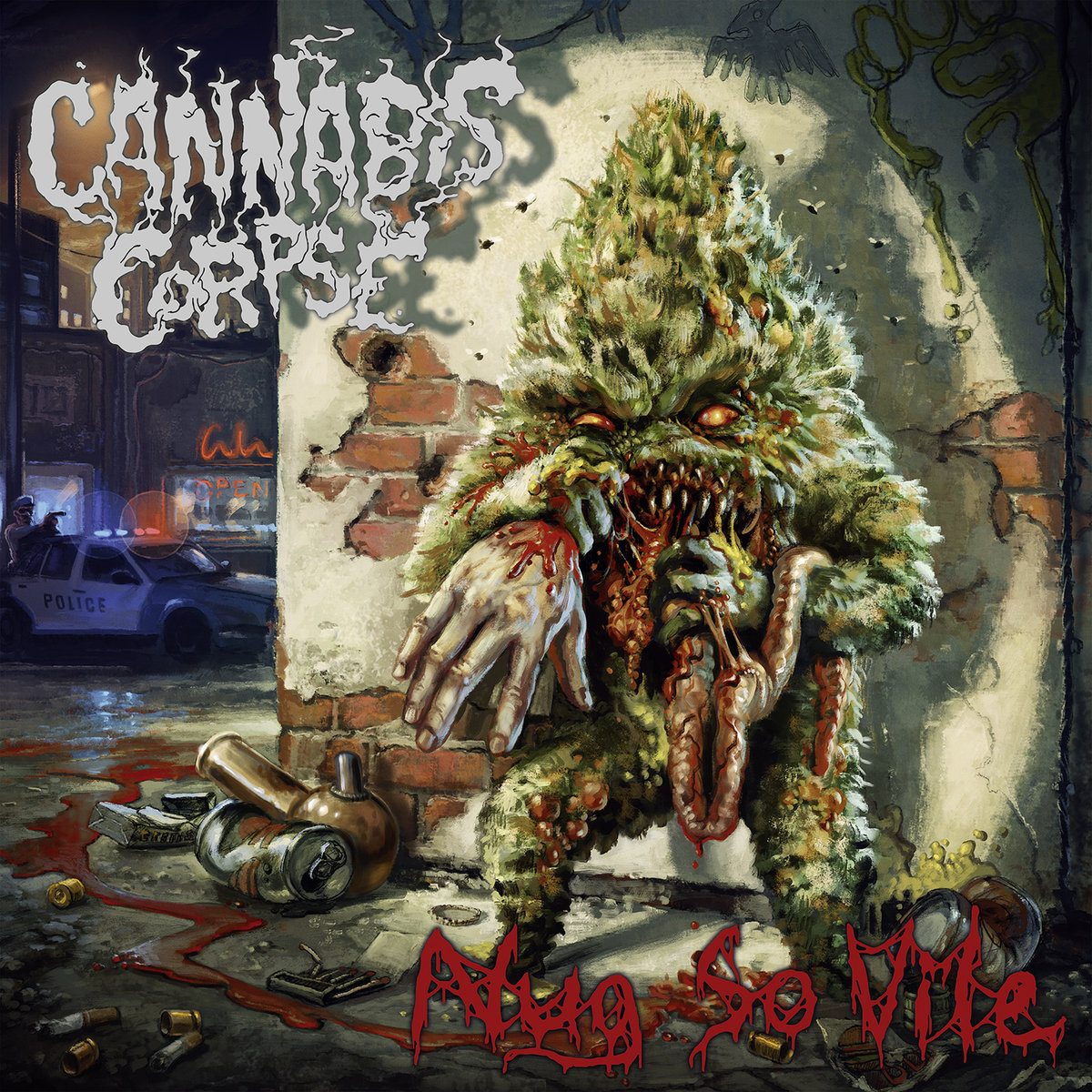 Spearheaded by a production that rides a rather interesting middle ground between the chunky, Scott Burns influenced death thrashing sound of the Florida scene and the darker and danker sound of the New York one embodied in Immolation and Incantation, this is a collection of songs that covers just about every historical base within the American death scene and even takes some time to pay tribute to the Swedish one. Often times the title of the song will clue the listener in as to the particular band that is being emulated and poked fun at; with the most notable bangers being the chuckle-worthy tribute to Cryptopsy in “Blasphemy Made Hash” (arguably the fanciest lead guitar display out of Guilliams on this album), the pounding doom-like nod to Immolation “Dawn Of Weed Possession” and the gang-chorus steeped foray into primordial death/grind territory with an eye to Napalm Death’s guidance “From Enslavement To Hydrobliteration”. Nevertheless, these simply represent the tip of a massive, bong-shaped iceberg of solid old school death metal worship with a humorous twist.

Call it a goofy play on words, but this is the sort of joke band that everybody in the death metal world should be taking seriously. It might be a bit of a stretch to label Cannabis Corpse as the Weird Al Yankovic of the sub-genre, but when it comes to their performance and songwriting credibility, that’s actually not too bad of an analogy to what the original king of parody accomplishes across a wide range of mainstream musical genres. This is basically prime cut for fans of Cannibal Corpse with a sense of humor (i.e. pretty much all of them given the admittedly campy character of the original’s horror and gore-steeped imagery), but pretty much anybody who fell in love with the death metal sound that became a multinational force throughout the first half of the 1990s will find a tasty, THC-infused treat here. Nothing new growing under the sun perhaps, but as far as reaffirming why death metal will continue to be a timeless art form that is loved by thousands and hated by millions, these songs hit all the right notes and offer up the goods with a limited amount of schwag.

Some jokes can actually be taken seriously, or at least that is the best way to explain how a blatant parody outfit merging the style of death metal with a reefer-obsessed lyrical approach can provide yet another solid slab of metallic goodness