Fortunate is the artist who is able to realize a vision successfully into finished form. All the more-so when that vision contains a diverse and wide-ranging palette of sonic textures, colors, hues and tones. For Bryan Beller, Scenes from the Flood is an example of such a realized vision, a triumphant success which will likely be a career-defining moment. Beller is primarily known for his bass work with guitar slingers like Steve Vai, Joe Satriani, Dweezil Zappa and Mike Keneally, along with his own innovative and genre-bending trio The Aristocrats. Although Beller is no stranger to releasing albums under his own name, having two studio recordings and one live project awaiting your ears at Bandcamp, his latest release is on quite a different level. Eighteen tracks divided into four parts on four album sides, this is an epic conceptual foray that is delivered largely on instrumental terms, with only occasional spoken and sung vocals. And it succeeds confidently.

What Beller has going for him is a deep understanding of how to use dynamics to engage and sustain the listener. We come to know this intuitively from the very first notes of opening track “The Scouring of Three & Seventeen”, a fragile rendering of the album’s main theme played so delicately on piano by Beller that one’s heart nearly breaks. You can taste the grandeur that awaits as the theme subtly grows and more instruments are tastefully added. Really, if you’re going to offer an epic double concept album, this is one of the classiest ways to begin. The album is filled with such sonic diversity that knowing how to transition from one mood to another is essential, and Beller proves masterful in this regard. A driving guitar anthem may fade out to the sound of tree frogs and rain with a lone solo bass gently introducing the next song; or after a spacious ambient piece, a drum-kit may set the groove before guitar enters to establish the melodic theme. Such attention to detail ensures that the audience is drawn in to each subsequent track and doesn’t suffer from listening fatigue. Along with a well-appointed, organic production, Scenes from the Flood sounds and flows beautifully from start to finish.

As the opening instrumental reaches its conclusion, a dramatic segue sends us into the first proper song of the album, “Volunteer State”. Like Satriani’s skill for writing melodic “singles” (e.g. “Always With Me, Always With You”, “(You’re) My World”, etc…), this is Beller’s own single-ready song for the album, fittingly brought to you by Satriani himself on various guitars and even banjo. The arrangement is infectious, the melody and delivery set to send the listener cruising down the road with the top down. The album features several other pieces driven by guitar with a number of guests such as Griff Peters, Rick Musallam and Teddy Kumpel on the melodic “Always Worth It”; Mike Keneally on the hard-hitting “Steiner in Ellipses”; and Beller himself, proving that his own guitar skills are more than capable on tracks such as “Bunkistan” and others. However, it is Guthrie Govan’s performance on “Sweet Water” that is one of the jaw-dropping album highlights, likely to stay with the listener long after the flood has receded. 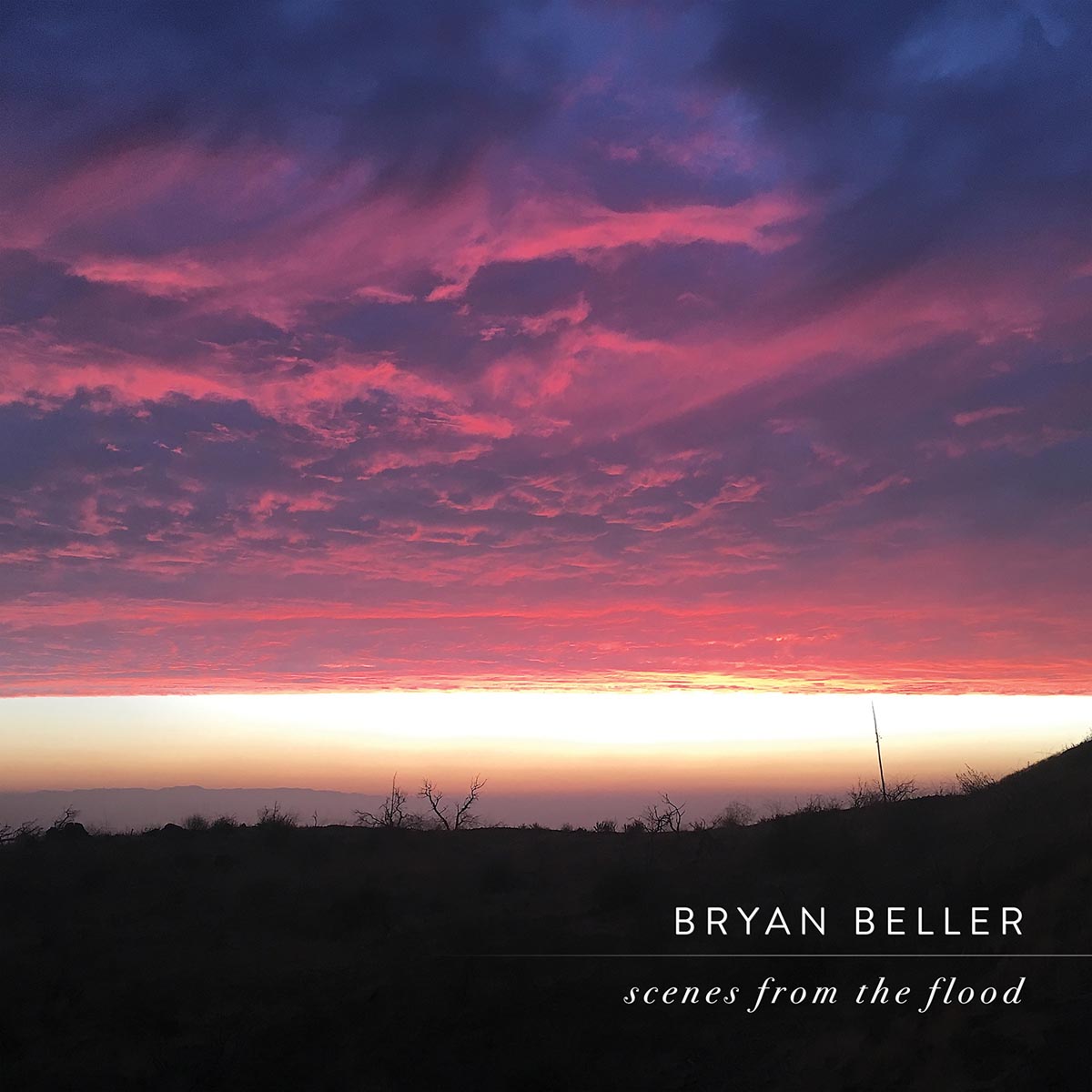 “Scenes From The Flood” Album Artwork

Two mini-epics serve as centerpieces, one of which was previewed as the first release from the album: “The Storm” lives up to its name, being one of the album’s most aggressive pieces thanks to the pounding drums of Gene Hoglan and Ray Hearne along with a host of guitarists. It’s a track that sports a marriage of finesse and aggression, with rhythms guitars that would make James Hetfield pale. A high-water mark of the album comes towards the end with the majestic “World Class”. Ray Hearne is back on drums with a stunning performance during this brilliant sojourn through India which combines the fiery sitar playing of Rishabh Seen with the shredding power of John Petrucci and Nili Brosh on guitars. Complimented by a host of violins and violas from Paul Cartwright, and bells and percussion by Christopher Allis, it’s as over-the-top as it sounds and a standout track which could brilliantly close the album if it wished.

There are many shorter tracks interspersed throughout, sometimes as intros or outros to other songs, sometimes making their own statement. Whether it’s ambient soundscapes or explosive attacks bordering on metal, these pieces rarely feel like filler but rather lend themselves to another aspect of the journey that we are on. Still, at a running time of an hour and a half, the listener is best rewarded if they have the patience to take it all in and not be furtively seeking musical hooks and easy answers. This is a calculated, yet accessible, work of art.

The album is not without its vocal moments. “Everything and Nothing” features a spoken-word existential meditation from Beller over-top a driving tempo from Nate Morton’s drums and Beller’s layered bass, while “Army of the Black Rectangles” finds a more distorted vocal from Beller as cell phones answer the call to blindly march forth. The longest track on the album, “Angles & Exits”, is the only truly sung piece featuring Beller’s plaintive vocals, and interestingly the only song written by another author, in this case by prepared-guitarist Janet Feder. “To leave is to return this perfect dream, these open arms past rushing back to me. All angles and easy exits, this is why we’re here.” Beller has said that his album is about themes of ambition and loss, intentionality and reality, hope and disillusionment, so he must have felt that Feder’s lyrics lent themselves to these inquiries. It’s a beautiful, spacious and moody track that carries an enigmatic ending.

Speaking of endings, the album has more false ends than The Lord of the Rings. It could have satisfyingly ended with the epic “World Class”, or even with the subsequent “Sweet Water” which reprises the main theme at its conclusion. Both are among the album’s best. But ultimately Beller chooses to have the last word, his rumbling bass on “Let Go of Everything” calling to mind Chris Squire’s rendition of “Amazing Grace” as the deep sonic resonance conjures up images of a landscape ravaged and laid to waste by the flood. We are left strewn open, tender to the touch but so much richer for the sprawling journey that we have traveled the past 88 minutes. After such an epic, introspective creative statement, there is no danger that Bryan Beller will ever be categorized merely as “the bass player”. As a composer, multi-instrumentalist and even singer, Beller has left his mark on these Scenes from the Flood, and left us feeling more human for it.

“Scenes From The Flood” Track-listing:

Scenes from the Flood is a colossal artistic statement and a career triumph. Although a mostly-instrumental double concept album runs the risk of self indulgence and eccentricity, Bryan Beller’s offering is a mature, diverse and engaging rumination that succeeds on every level. With a cast of 26 musicians, these Scenes offer rich introspection and enjoyment for the patient listener, a journey that demands repeated listening. One of the year’s most intriguing and staggering albums, it will for sure end in our 2019 best of lists.