The conspiracy has been reborn.

Call it nostalgia, but there was something truly unique and compelling about the original run of The X-Files. The time was ripe for a needed dose of skepticism to be injected into the public’s consciousness regarding government and established institutions, combined with a more expansive dialogue on the topic of metaphysics. But as with all successful ventures, there are always forerunners that blaze a path a bit earlier on, for as the old adage goes, there is nothing new under the sun. One such predecessor to the aforementioned television show and cultural phenomenon was the short-lived 80s speed metal outfit Agent Steel, a band that delved deep into the realm of hidden conspiracies with a blatant extraterrestrial theme and set it to a metallic template that was highly unique for its day, albeit comparable to the slightly earlier exploits of Helstar, Omen and Jag Panzer. Theirs was definitely a road less travelled on both the musical and lyrical fronts, so much so that even the band’s sudden 1988 disintegration has often been the subject of conspiratorial speculation.

If the project itself could be likened to the aforementioned TV show, then its enigmatic front man John Cyriis would be the equivalent of its principle character Agent Mulder, to the point where it becomes a question of whether or not Agent Steel could be seen as such with him being absent. Nevertheless, the power metal revival of the late 1990s saw most of the instrumentalist lineup that crafted their 1987 swansong “Unstoppable Force” reform the group without him, and the results began as something akin to an effective spin-off of the original along the lines of Millennium or The Lone Gunman. A similar atmosphere was struck by most of the original cast being involved, and replacement vocalist Bruce Hall did a capable job at bringing the whole thing together, resulting in two new classics in “Omega Conspiracy” and “Order Of The Illuminati”, along with a stylistic pivot turned dud in 2007’s “Alienigma” just prior to the latter day continuation folding tent and Cyriis regaining control of the Agent Steel name in 2011, resulting in yet another spin-off dubbed Masters Of Metal that would see a respectable continuation of the “Omega Conspiracy” sound into the mid-2010s.

Now with a completely new lineup in tow, Cyriis has unleashed his first fully produced product from his well of unconventional ideas in over 30 years in 2021’s “No Other Godz Before Me”, and the results can be best explained as a small yet noticeable expansion upon Agent Steel’s past and some of the short-lived projects that occupied Cyriis’ time immediately afterward. It’s of a far more concentrated speed/thrashing character that makes it a bit more kinetic and frenetic than the nuanced, almost Queensrÿche-infused character of “Unstoppable Force”, yet it comes off as a bit more restrained and controlled when put against the wild speed metal frenzies that dominated both “Skeptics Apocalypse” and the “Mad Locust Rising” EP. The songwriting structure is definitely of a simple nature, often focusing upon streamlined riff work and a tightly focused rhythmic backdrop to allow the vocal work to be the center of attention and engage in the sort of inhuman acrobatics that one might expect from the likes of King Diamond, Midnight or Geoff Tate back during the high period of 80s excess.

For their part, the instrumentalists adapt their respective chops to the 80s speed metal template effectively, while guitarists Nikolay Atanasov and Vinicius Carvalho showcase a degree of technical intrigue in the soloing department that’s a bit fancier than the prior ones showcased by Garcia, Versailles or Kilfelt. It’s not quite to the point of rivaling the outlandish shredding sessions that one might hear out of Joe Stump or Yngwie Malmsteen, but apart from some obvious melodic hooks inspired by Iron Maiden littered here and there, the degree of technical proficiency on display here surpasses a typical 80s USPM performance. Be this as it may, Cyriis himself has delivered up a performance that’s of an even more exaggerated character, often steeped in effects and embodying the alien-like character of the lyrical content. It bears some level of similarity to his more Geoff Tate-inspired performance on “Unstoppable Force”, but the quirky harmonized segments and flanger-steeped passages put things in a notably more interstellar light. It’s a bit of an acquired taste, but it definitely feeds into the character of the album’s theme of sinister manipulators behind the scenes quite effectively. 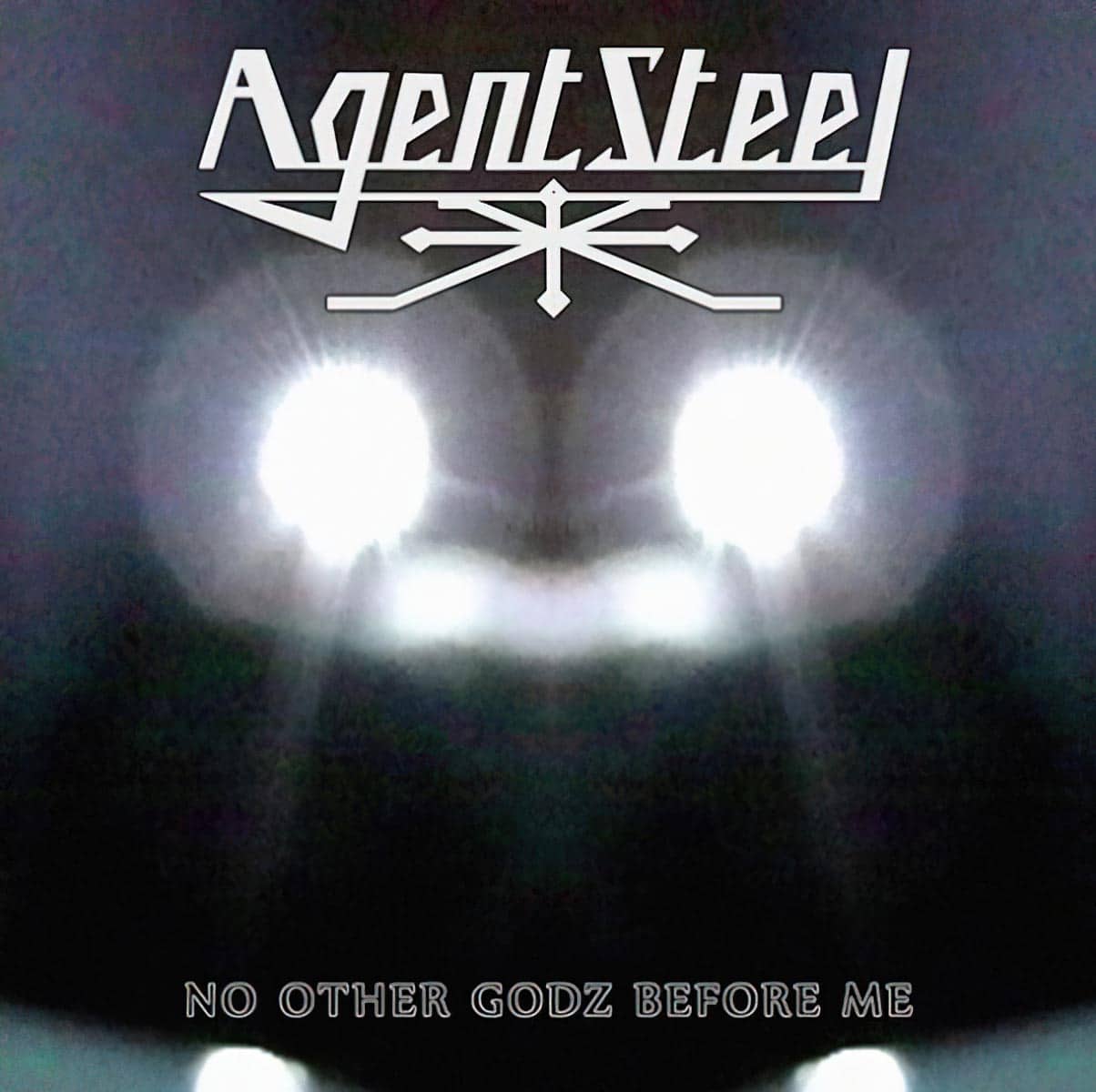 “No Other Godz Before Me” Album Artwork

True to form, this album begins and end things on a decidedly cryptic note with a pair of ambiguous instrumental works with odd spoken passages dubbed “Passage To Afron-V” and “Entrance To Afron-V” respectively, yet also a solid and simple melodic hook that serves to orient things for the upcoming barrage and then close things on a familiar note. In between this, however, is a collection of guitar happy, high speed goodness that has scarcely been heard on the western side of the Atlantic since the close of the 80s. The songs are generally differentiated by varying degrees of intensity and speed, with the heavy thrashing cruisers “Crypts Of Galactic Damnation” and “The Incident” being of a chunkier and slightly less frenetic character, while the light speed romps after the heart of “Skeptics Apocalypse” in “Outer Space Connection” and the riveting title anthem “No Other Godz Before Me” cut across the skyline so quickly that the unsuspecting eye might miss them. On the other hand, “The Devil’s Greatest Trick” functions as more of a vocal showcase with a streamlined speed metal character, ditto the somewhat swifter yet heavy-ended “Sonata Cosmica”.

Naturally due to the contention surrounding the dissolution of the Bruce Hall era of this band and Cyriis opting to act without the input of his old band mates, this is an album that has arrived to a degree of skepticism among Agent Steel’s fan base that is of a slightly less extreme character to the one that dogged Queensrÿche after Geoff Tate left the fold. But the question of whether the current Agent Steel or the Masters Of Metal spinoff that has been sitting in limbo for the past few years is the true continuation of the original is an ancillary concern when coupled with the brilliant display that occurs within the bounds of “No Other Godz Before Me“, musically speaking. Those looking for a well produced barrage of classic speed metal that holds true to the 80s ideal of more is more will not be disappointed, and while the highly flamboyant character of Cyriis’ vocal performance is a bit atypical compared to the one he embodied back in the day, the mixture of James Rivera-inspired grit and haunting high-pitched ravings has a charm to it that becomes more apparent after repeated hearings. This is metal straight from the dimensional wormhole hiding in the Bermuda Triangle, so expect the unexpected, and expect to be inspired to look past the pretense of things and dig a bit deeper, because the truth is out there.

“No Other Godz Before Me” track listing:

The enigmatic prognosticator of all things interstellar and conspiratorial returns from a lengthy hiatus, now surrounded by a new flock of metal masters to resurrect the ponderings of Agent Mulder’s predecessor for a new generation of Sci-Fi enthusiasts