Among the screaming and the shredding, metal proves itself to be a distant cousin of the oral tradition time and time again. Tales of wars and glorious battles, and of Vikings and their folklore, are catalogued across an impressive array of subgenres. If one desires to have chronicles of World War II or Eric the Red in their music library, the choices are nearly boundless within the confines of metal alone. But for the niche of Roman history, ADE seems to rise alone to fill the gap.

At the intersection of Ancient Rome and modern death metal stands ADE, proudly delivering their fourth full-length studio album titled “Rise of the Empire.” Lyrically filled with tales from the age of Caesar, ADE brings traditional Greek instruments to the table alongside stories of days long past. Rather than merely peppering small tastes of folk-inspired melodies between tracks dominated by death, ADE fills out entire arrangements with the rich depth of traditional percussion and string instruments. Their level of skill follows in the path of Nile, known also for their integration of Middle Eastern folk elements into their work, but with additional sincerity in their delivery.

Hailing from Rome themselves, ADE holds the credentials to provide an immersive history lesson of the land they call their home. Pride for an immortalized empire shines bright in songs that are part battle cry, and part cinematic embellishment. “Rise of the Empire” is filled with memorable tracks that build excitement and highlight the songwriting of knowledgeable musicians. As noted, the blend of folk is interwoven seamlessly throughout the stylistically predominant force of death, where electric guitars walk hand-in-hand with swelling horns. Opening track “Forge the Myth” is built on the shoulders of folk alone, creating an incredible level of apprehension and excitement for the album to come. Leading into “Empire,” the moment that vocalist Diocletianvs first unleashes his roar is when listeners are pulled forever into the depths of “Rise of the Empire.” 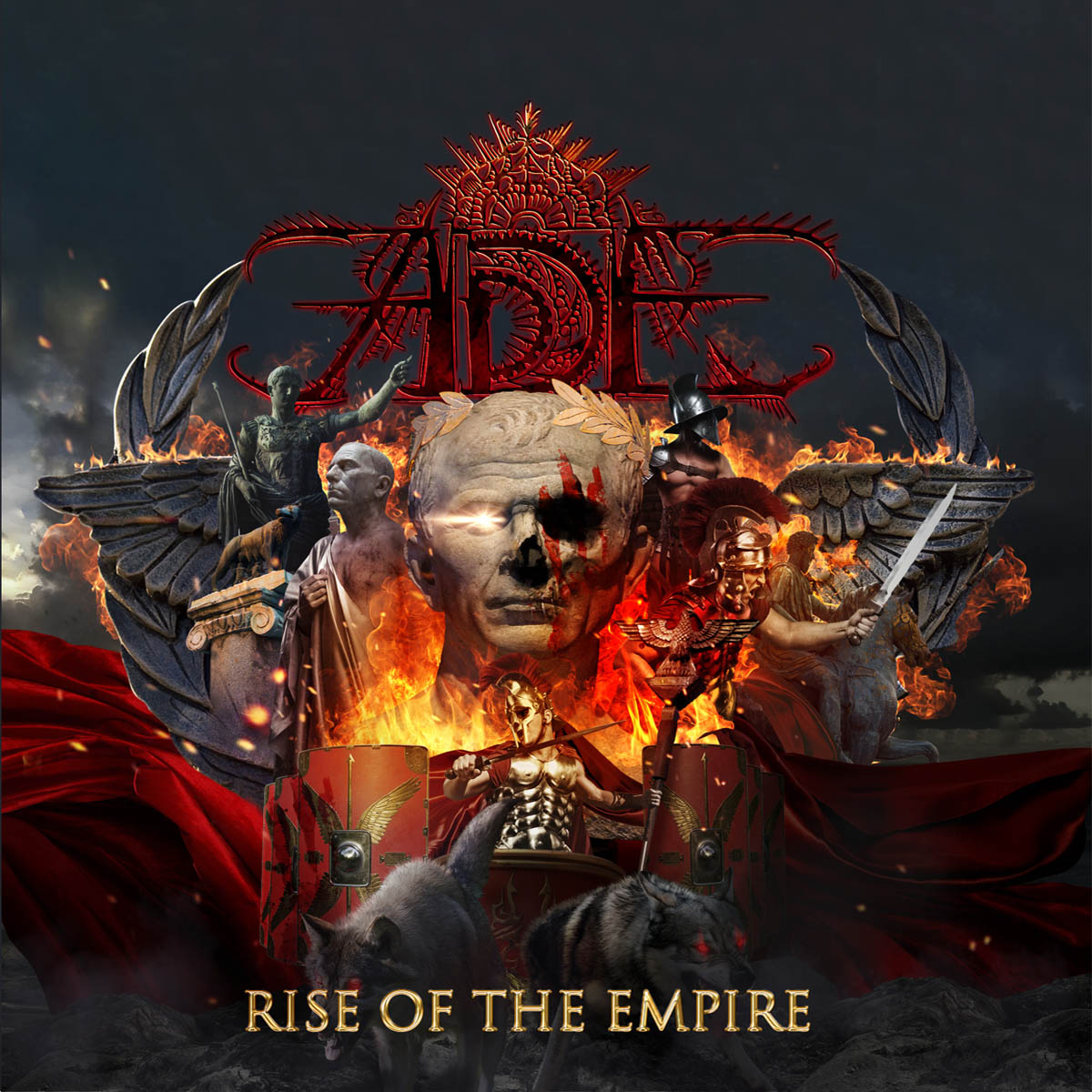 “Rise of the Empire” Album Artwork

As more traditional death grabs hold of the main theme, while still elevated by its folk influences, the album’s value is immediately apparent. In just over three minutes of music, ADE shows the musicianship and creativity to warrant a serious consideration of the album’s entirety. Tempting hooks and pioneering use of Greek folk immerse listeners in anthems that sound as though they were a genuine Roman cry for war. No matter the number of memorable songs that stand out from the fray, here’s no anthem stronger than ninth track, “Veni Vidi Vici.” With a mesmerizing melody and infectiously catchy chorus, one will find themselves caught up in the pure aggression of Diocletianvs as he shouts “veni, vidi, vici.” Loosely translated from Latin, this timeless phrase is said to have been uttered by Julius Caesar himself following a victorious battle: “I came, I saw, I conquered.” There is no question that ADE has conquered their interpretation of the duality of the Roman empire: vicious brutality dripping in a complex and multifaceted cultural dimension.

There are very few chinks in the tightly woven creative armor, imperfections difficult to catch in a dense onslaught of both sheer brutality and unusual musical imagery. In a way, it’s the traditional Greek arrangements that provides ADE with a shield; any diminution of their performance in death is masked by the novelty of something new and unusual to most listeners. That said, there are very few points in the album that are weak; combining two strong genres to form a unique and artistic style has made ADE’s impression nearly impenetrable. Occasionally, tracks err on the side of impressing with sheer grandeur, rather than making their point subtly through the technical capabilities demonstrated by guitarists Fabivs and Nerva. No matter how effective this may be at the album’s start, the tendency towards such a forward style grows a touch weary by the album’s conclusion.

No matter whether listeners are drawn in by the thematic content, or by the unique style that ADE brings to the table, “Rise of the Empire” is an album that is difficult to find disappointment in. ADE has seen a vision to bring something extraordinary to metal, and they are on their path to conquering.

“Rise Of The Empire” Track Listing:

ADE brings the grandeur of the age of Caesar to the present by way of unforgiving and brutal death metal. By combining the cinematic strengths of traditional folk and the power of guttural screams, “Rise of the Empire” tells an unforgettable tale that neither history buffs nor metalheads would do well to pass on