An internationally renowned music impresario, Leonardo Pavkovic has become legendary worldwide for his music management, worldwide booking and promotion abilities. Born in Bosnia in former Yugoslavia in 1962, he was raised in southern Italy and is fluent in five languages. He studied Portuguese and Brazilian literature at the University of Bari in Italy and Afro-Portuguese History & Literature at the University of Luanda, Angola (Africa), and had two volumes of his own poetry published. Between 1984 and 1990 he translated volumes of artistic, literary and scientific work from/to Italian, Serbo-Croatian and Portuguese. He moved to New York City in 1990.

As a musicophile and record collector, Leonardo has befriended some of his favorite musicians, becoming by default, road and tour manager and subsequently manager for artists such as Soft Machine (Legacy), Allan Holdsworth, and others. These artists looked to him for guidance and empathy as someone who could understand and love the music they played while taking care of the business side of their career. MoonJune Records is a record label that concentrates on progressive rock, jazz rock, and forms of avant-garde music and it was established by Leonardo Pavkovic in 2001. Below you can find a letter penned by Leonardo about the current grim state of the label’s business amidst the Covid-19 pandemic, and how to help him to continue his labor of love. We wholeheartedly encourage you to read on.

Greetings from the MoonJune’s World Headquarter in New York City

As many of you already know, besides MoonJune Records, I also run an independent artist booking and management agency: MoonJune Music (Bookings & Management). Both companies are under one umbrella  – MoonJune, and the company is run by myself, alone. I do not have bosses; neither do I have employees.

Many of you are also aware that there is no longer any money to be made within the business-model framework of the traditional record label company; at least to the point of producing sufficient cashflow to sustain a business. That said, for an independent label dedicated to a stylistic niche genre such as ‘progressive’, being profitable has always been elusive. Despite just having reached a milestone 100 album releases, less than a dozen of these releases ever made more than enough money to cover the considerable costs of production and mailing out music-critic copies. (… a sad testimony – yes – but one which reflects the challenges provided by producing such music.)

With the recent development and spread of the Corona Virus now having reached ‘worldwide pandemic’ proportions, MoonJune Music has been profoundly impacted. Numerous shows – and entire tours – have been cancelled; some of them, suddenly: without warning, after numerous travel and tour-related expenses had already been dispersed, and for which no subsequent payouts or paybacks / refunds could be realized.

2020 was a year that started with great promise. It was slated to be my best year in at least the last decade – with a multitude of shows contracted (and others with contracts pending) on five continents. But, my friends, the month of February, spilling over into March, have been devastating to MoonJune. I’ve suffered the worst setbacks in 20 years of my doing this.

Loss of cash flow and income is not hitting only my company, but most of the artists on my booking roster, also, Without these bookings, I am unable to subsidize my indie record label.

There have been so many cancellations:

And there is much more, this is just on top of my tongue. I have to deal with several dozens of situations in which I have to change flights, hotel bookings, talk to so many people around the globe, rescheduling or trying to reschedule shows, festivals, tours, and much much more.

At this point, I am not sure what will happen … and there is much more than this, affecting other artists on the MoonJune‘s booking roster as well.

By my nature, I do things, rather sitting around complaining or waiting for life to take some sudden turn for the better. Armed with a very positive attitude and an optimistic philosophy, all I can say is: “the show must go on!”

I know that the Corona Virus situation impacts us all. I’m sure many of you have your own related struggles, but if you have a little time and little extra cash, I would humbly suggest you consider this three special offers, which will help me, but above all it will help many of my musicians to go forward and survive the unexpected struggle. I am OK, no worries, many are doing much worst than me, and need help more than me. Despite all, the world will not end tomorrow, it’s not the end of the humanity. I come from Balkans, I have a thick skin, I have learned how to survive since I was a little kid. It’s the “abracadabra” time!

I like to travel, I have been in 80 countries around the world, I am global, and the recent travel restrictions and tours/festivals cancellations, are preventing m to travel. For now, I am home, listening a lot of music, and I have a lot of music. And cooking, I love to cook. Life continues. The evil will be defeated and soon.

Therefore, I am asking You for a little support. Need to generate some cash flow, to make possible to release several albums still on hold, and to produce more new albums. Anything helps.

Once we receive payment for this deal (19 physical CD’s), you will be sent an e-mail with an attached Excel file — with the list of selected and featured CDs from the MoonJune Records‘ catalog, and many others from associated artists promoted by my label. No worries, there are a lot of CDs to choose from, over 70! Just e-mail me back the list of chosen CDs: [email protected] If you need help, I will do it for You; but make sure you list albums already in your collection, and I will help you fill in the gaps.

Link to purchase this specially priced package is this. 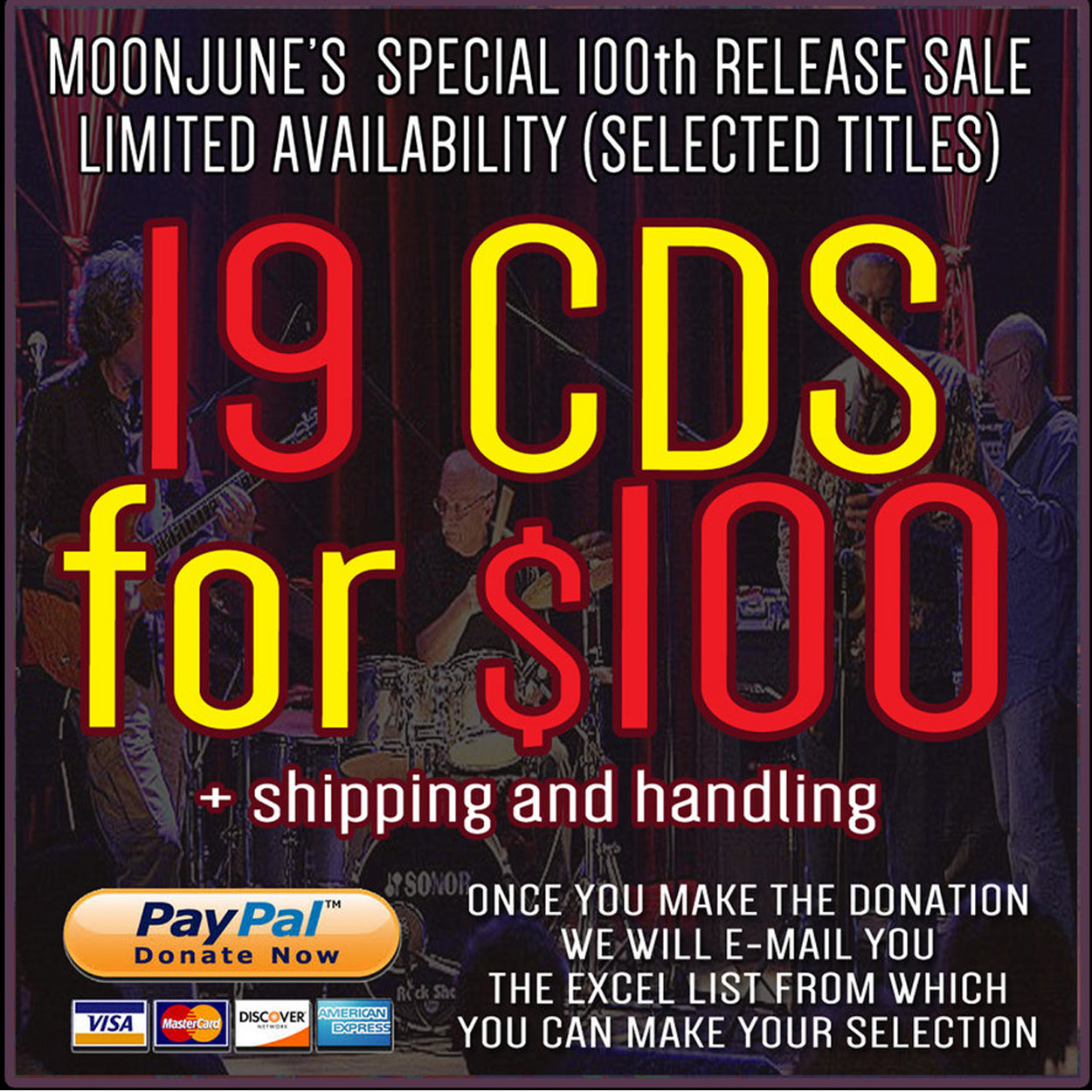 “19” represents 19 years of MoonJune Records, and “100” represents our milestone 100th release on the label. You can choose any 19 digital album available on the MoonJune Records‘ BandCamp page. Once You make selection, please e-mail us Your desired list: [email protected] and download codes will be sent to You in 24-48hrs max. If you need help, I will do it for You; but make sure you list albums already in your collection, and I will help you fill in the gap.

Link to purchase this specially priced package is this. 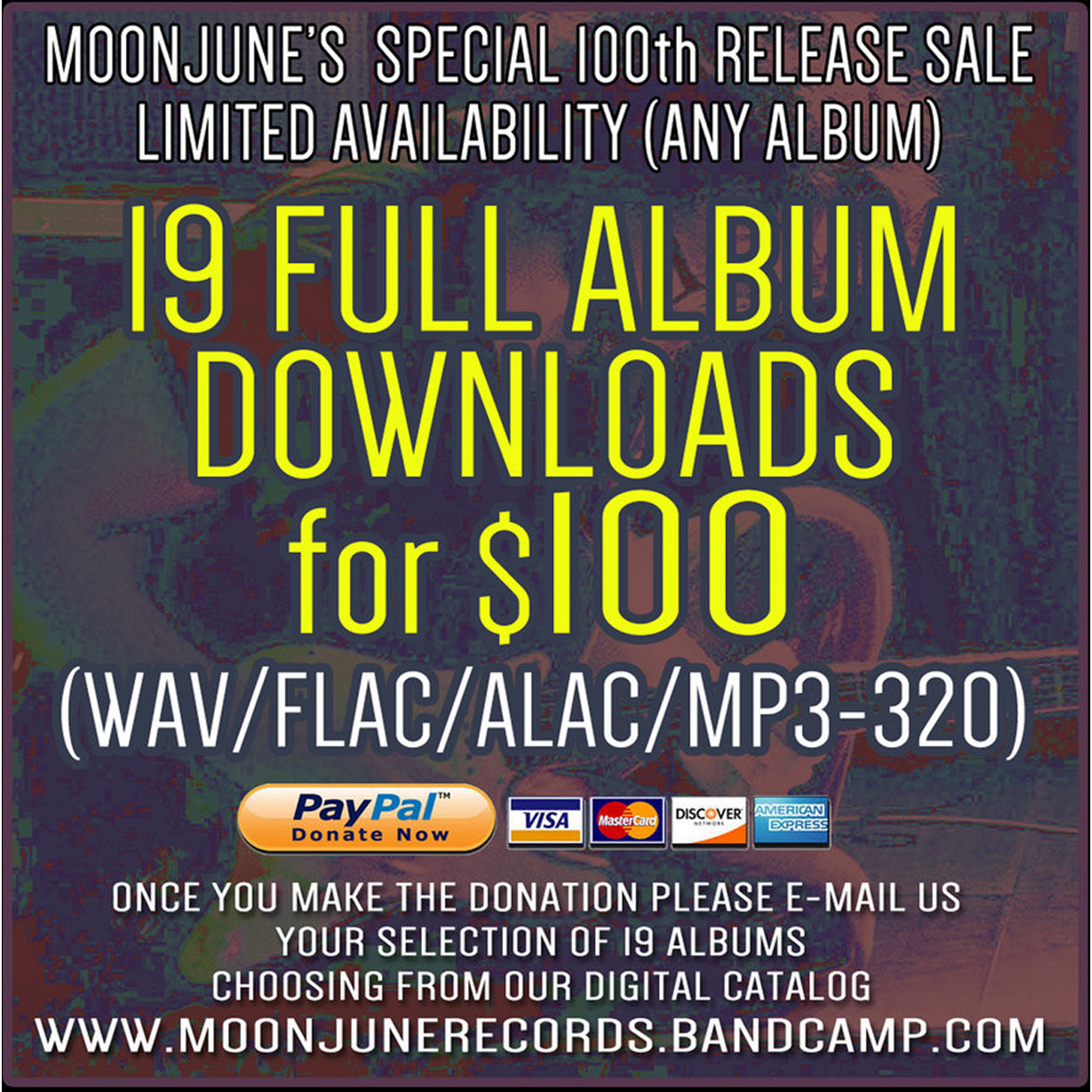 By contributing $100, you become a “MoonJunista VIP“. You are directly supporting MoonJune Records, and in embracing such a role, you’ll receive ALL of the upcoming MoonJune Records and MoonJune-related releases in digital format! Realistically, VIP’s should expect 15-18 or more releases annually, and that’s a killer deal! (CDs and LPs are not included in the subscription package.)

As an added bonus to subscribers, an automatic discount of 25% will be applied to all merchandise purchases offered through MoonJune‘s BandCamp site (CDs, LPs, t-shirts, books, etc). This VIP membership also gets you automatic downloads of 33 digital albums: samplers, compilations and several selected albums from the MoonJune’s BandCamp – including MoonJune Records’ releases, as well some non-label releases promoted by MoonJune through our BandCamp page.

So many of you have been loyal, dedicated supporters; a number of you for many years. As always, your support and encouragement is so greatly appreciated – especially during such dire, extreme circumstances. 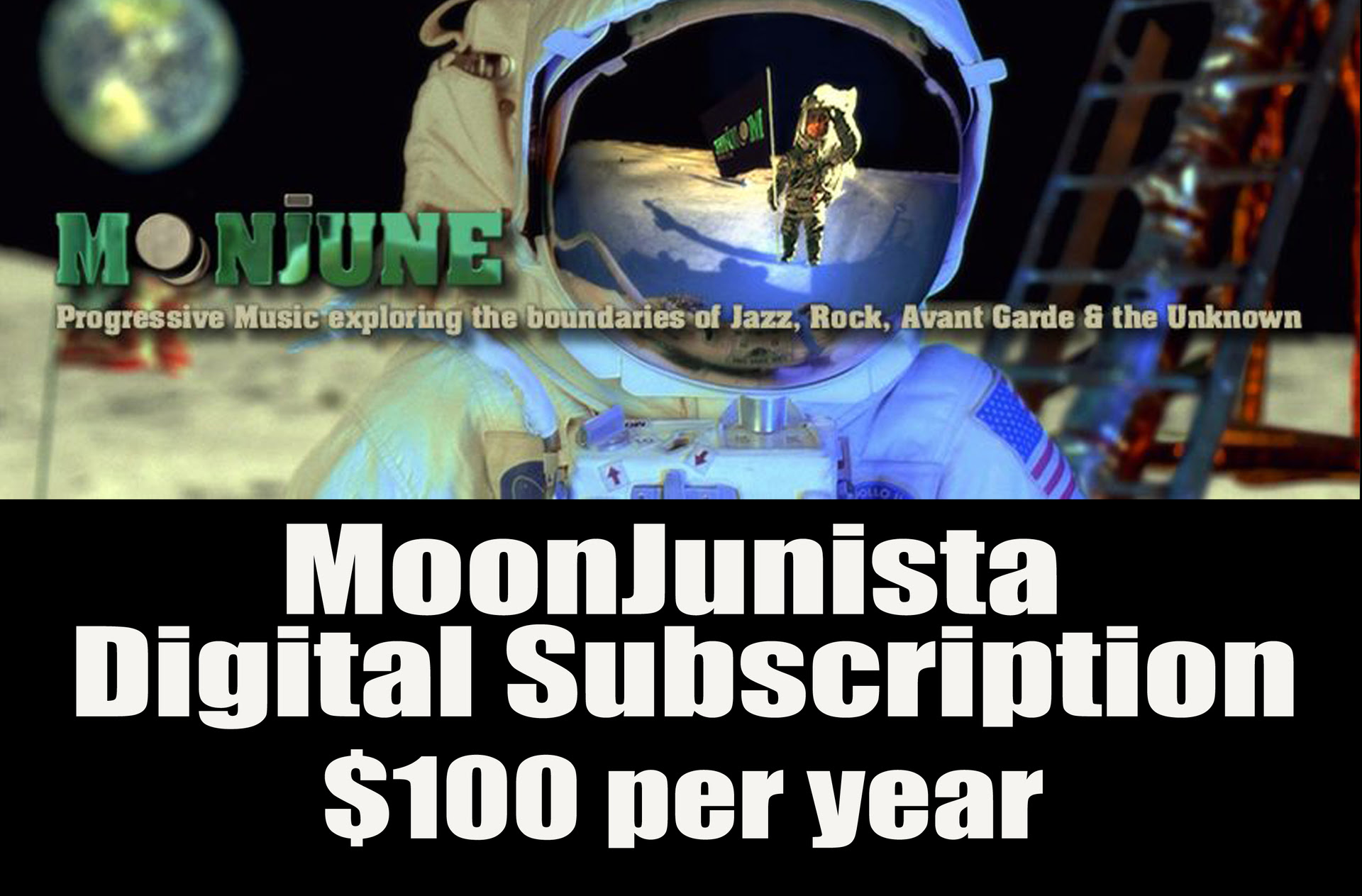 Thank you all for the support