Hide your women, children and your pets!!! California’s greatest export and medical marvels Steel Panther are heading out on a national headline tour of the United States. The tour, called the Heavy Metal Rules Tour, kicks off in early October and runs through mid-December. The tour will be in support of the band’s recently announced 5th studio album Heavy Metal Rules.

The 27-date trek will make stops in markets such as Orlando, FL; Boston, MA; New York, NY; Detroit, MI; and Chicago, IL to name a few. Steel Panther live is always the ultimate party and has developed them a loyal fanbase around the globe. Public on sale for all shows is July 19th and more information on all shows can be found here. 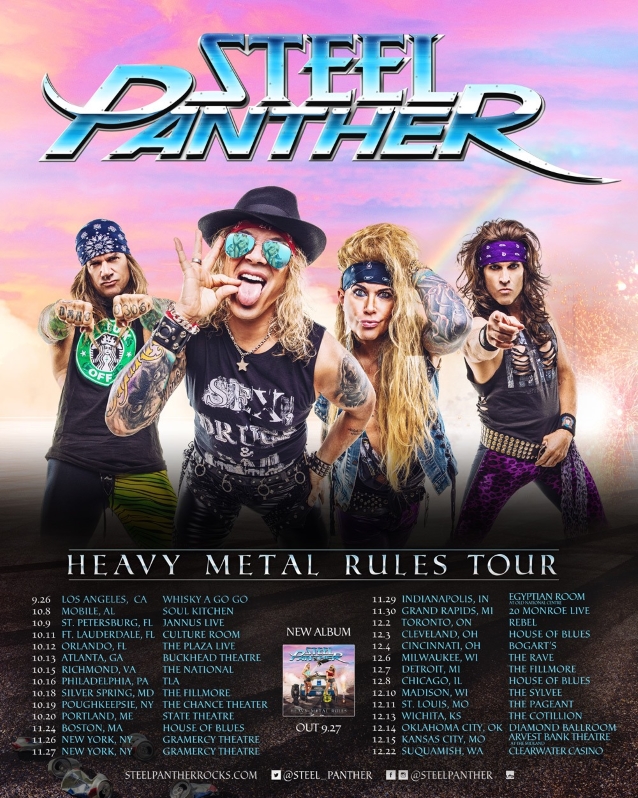 STEEL PANTHER will release its fifth studio album, Heavy Metal Rules, on September 27. The disc, which is described in a press release as a “heavy metal version of a self-help manual and ultimate party album combined,” was once again produced by Jay Ruston, who collaborated with the band on all of its previous recordings, including its latest LP, 2017’s Lower The Bar.

The band says in a statement: “‘Heavy Metal Rules’ is the ultimate party album. Anthem after anthem and hook after hook, the songs will provide the soundtrack to your new bitchin’ heavy metal life. The first single, ‘All I Wanna Do Is Fuck (Myself Tonight)’, is the ultimate song about self-love and having a positive personal self-image. It is the kind of song you put on to get yourself in the mood whether you’re getting ready to have sex with yourself or 17 girls in a row.”

Heavy Metal Rules is available for pre-order in various bundle configuration here. The video for the first single “All I Wanna Do Is Fuck (Myself Tonight)” was shot in Las Vegas and features cameos from numerous celebrities from music, comedy, YouTube and more. The video can be seen below.

STEEL PANTHER will celebrate the release of “Heavy Metal Rules” with a concert at the Whisky A Go Go in West Hollywood, California on September 26.