On June 6th, SLAYER will release the Repentless 6.66 Collector’s Box Set, featuring all tracks from the band’s Repentless album on unique 6.66″ vinyl. The limited edition release will be available in black, red and gold-colored discs, and only 2500 of each color will be manufactured worldwide. Each set will feature six single vinyl EPs, each one measuring a unique 6.66-inches in diameter, and each will contain two songs from the Repentless album. The red and black discs version will retail for $66.66, while the gold disc set will be priced at $73.99. Pre-order links can be found below: 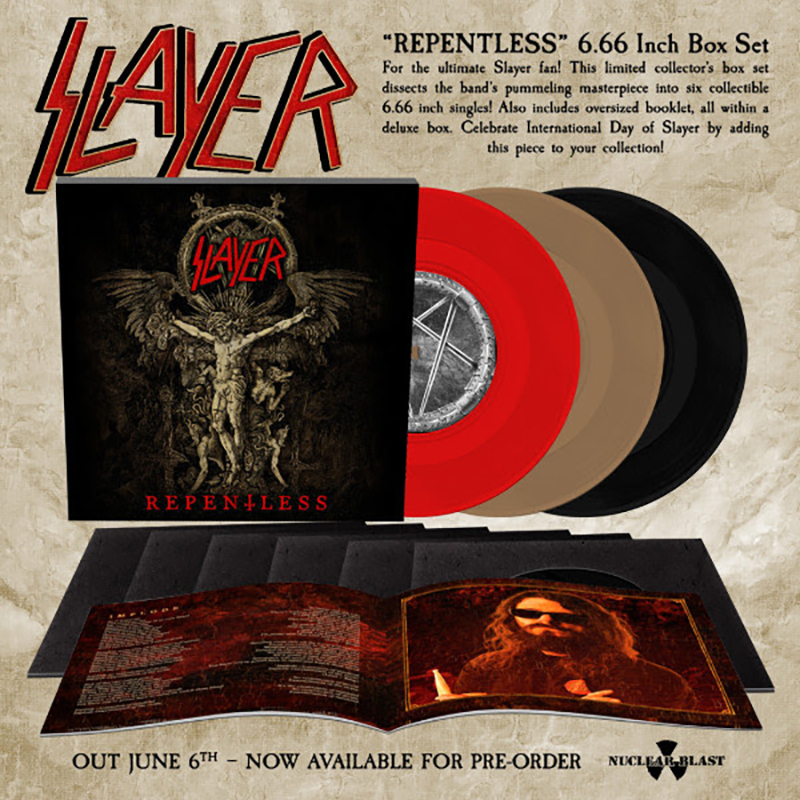 Side A:
“Delusions Of Saviour”

Side E:
“Cast The First Stone”

Side F:
“When The Stillness Comes”

Side I:
“Piano Wire”

Side K:
“You Against You”

Side L:
“Pride In Prejudice”

By popular demand – with more than half the tour dates already either completely sold out or a sell-out imminent – Slayer recently announced Leg Two, North America, of its final world tour, set to kick off on Thursday, July 26th at the Bank of New Hampshire Pavilion in Gilford, NH.  The tour will travel to 20 cities over about five weeks, culminating at San Jose’s SAP Center on August 26th. Lamb of God, Anthrax, Testament and Napalm Death will accompany the band on all dates. Log on to slayer.net for all ticket and package purchasing information.

A second North American leg for this tour had been considered to take place at some point down the line, but within 48-hours of the initial January 26th ticket on sale date, that all changed. “We were blown away by the speed of sales for the final run,” said Rick Franks, President of Touring for Live Nation, one of the tour’s promoters. “Thirty-six years later and Slayer is bigger than ever before.” New and previously announced dates for Slayer‘s final world tour, North America Legs One and Two, are listed below.