Steve Morse, Mike Portnoy, Neal Morse, Dave LaRue and Casey McPherson, collectively known as FLYING COLORS soar to even loftier heights with Third Degree, their third studio album in a decade that’s set for release on October 4, 2019 via Music Theories Recordings / Mascot Label Group. The video for the first single “More” can be seen below.

In chemistry, when certain galvanizing elements come together, they become quite explosive. In music, when certain galvanizing artists come together, they become FLYING COLORS. In fact, whenever the five gentlemen who encompass FLYING COLORS are able to conjoin their collective talents, the result is a sweet sonic bouillabaisse that reflects where their inherent mastery of melody intersects with top-shelf progressive musicianship. Third Degree builds upon the genre-bending momentum of 2012’s self-titled FLYING COLORS and the aural-template ascension of 2014’s Second Nature. From the skittery psychedelic/classical turnaround of the lead single “More” to the Beach Boys-meet-Asia vibe of “Love Letter” to the deep emotionality of the album-ending, prog-leaning epic “Crawl,” the nine tracks that comprise Third Degree signify just how much FLYING COLORS are willing to explore new frontiers.

“There’s a lot of ear candy sprinkled throughout every song,” observes Mike Portnoy, “and each one takes you on a little journey. As albums go, Third Degree is a complete piece that I don’t think ever overstays its welcome. I think it’s an enjoyable ride from start to finish.”

Third Degree continues to build upon the deep-rooted musical connection the members of FLYING COLORS established on their first two boundary-stretching albums. “There’s a real special chemistry between the five of us,” Portnoy confirms.

“We keep getting better and better as we get more comfortable and more familiar with each other, and the music itself keeps getting more and more mature.” Adds Steve Morse, “This one, dare I say it, explores new ground for the band. We just do what makes us smile and sounds good, instead of wondering how critics or program directors will like it. It makes for the best music!”

“Our mission statement when we came together is still the same now,” Portnoy affirms. “It’s the same five guys with extremely different musical personalities and backgrounds coming together into a giant melting pot where it all comes out on the other end with music that’s accessible, melodic, deep, and colorful. That’s always been the goal of this band, and so far, I think we’re three for three.” 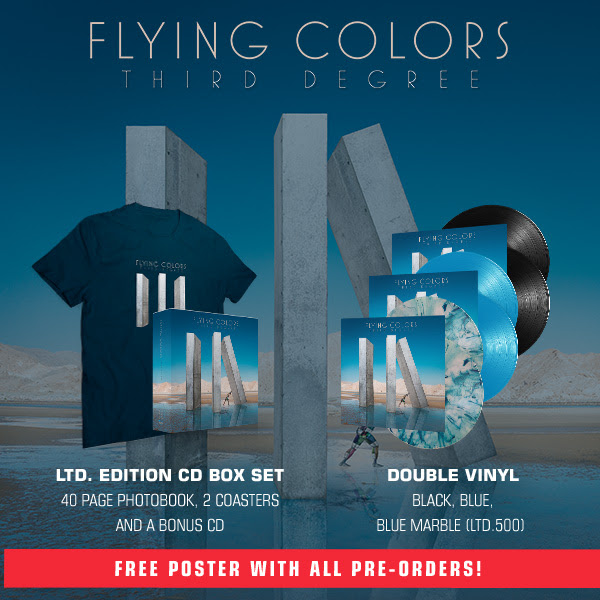 Third Degree can be pre-ordered at this location and will be released on these formats: