The 45th anniversary of RUSH‘s “Fly By Night” album and the band’s first major headlining tour will be commemorated by Iconic By Collectionzz with official limited-edition screenprints by Barry Ament of the legendary Ames Bros.

In December 1974, RUSH recorded its second album, “Fly By Night”, with its then-new drummer Neil Peart. With the addition of The Professor, “suddenly, it was a very different band,” said bassist/vocalist Geddy Lee. “Once we had Neil with us, so much changed in the way we wrote music and the way we presented it. And from that point on, it felt like we could do anything.” Guitarist Alex Lifeson agreed: In many ways, the second album felt like a new start for the band.”

RUSH supported “Fly By Night” with a 70-city U.S. and Canadian tour that covered from February to June 1975, opening for rock behemoths KISS and AEROSMITH. They also performed their first major headline shows across Canada, including a sold-out show in Toronto at Massey Hall for 4,000 people. As Ultimate Classic Rock so eloquently put it: “Neil Peart wasn’t just the new drummer; he was the spark that pushed them to greatness.” 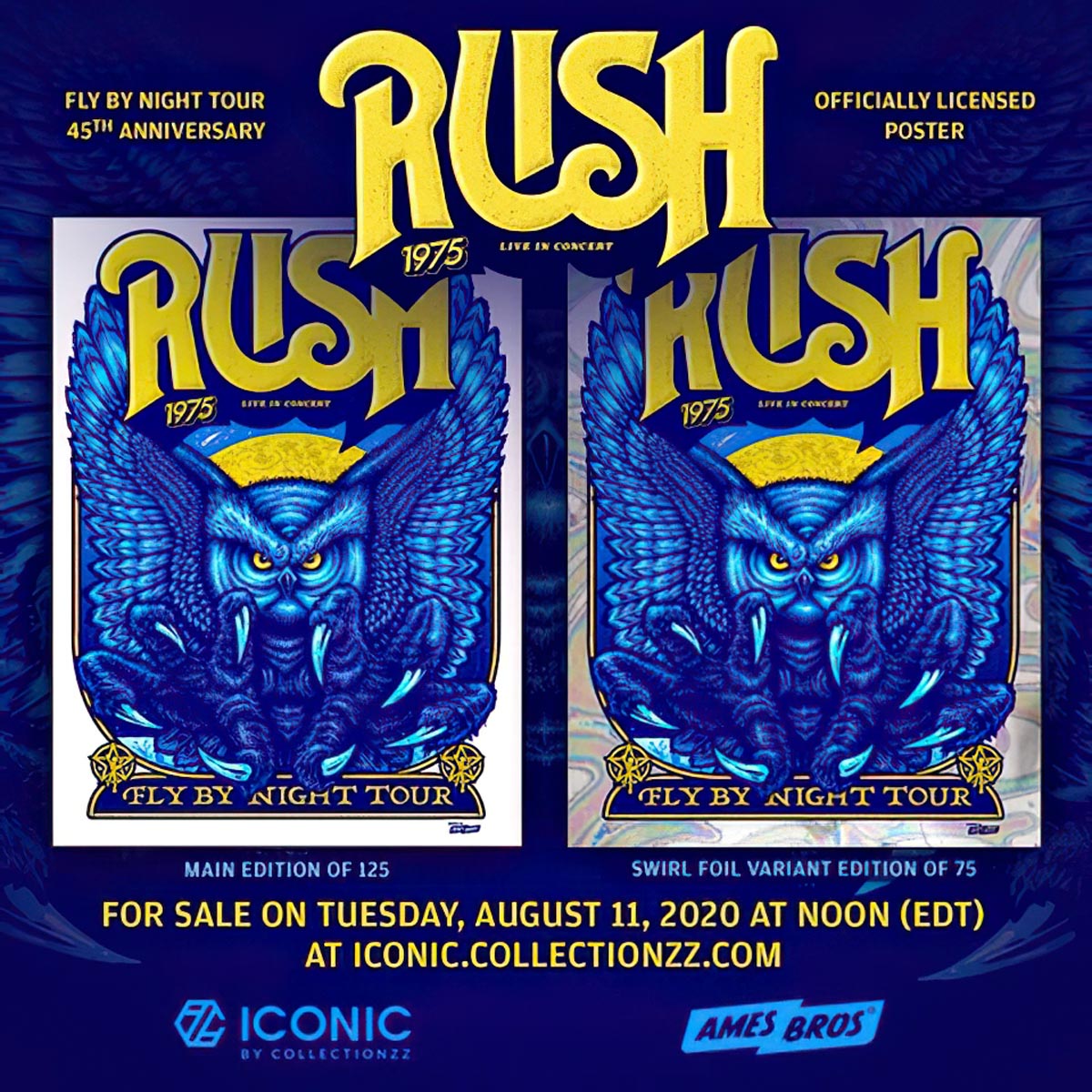 Neil not only had a hand in the lyrics, he also became the ‘graphic arts supervisor’ for the classic album cover.

Peart said: “One of the first lyrics I submitted to Alex and Geddy was ‘Fly By Night’, and when the time came to make our first album together, we decided that was a good title. (Our other candidate was ‘Aurora Borealis’, so we probably made the better choice.) As a bird lover since childhood, I remembered an illustration of a snowy owl swooping down toward the viewer with fierce eyes, and I suggested an image like that for the cover, maybe with the northern lights in the background. It fell to me to talk on the phone to the record company artist in Chicago, and try to describe this picture in words. In the same way that writing those few lyrics for the band would lead to me becoming the band’s chief wordsmith, that phone conversation led to me becoming the ‘graphic arts supervisor.'”

RUSH‘s final show took place at the Forum in Los Angeles on August 1, 2015. Peart indicated at the time that he wanted to retire while he was still able to play well, along with a desire to spend more time at home with his young daughter. Peart was considered one of the best rock drummers of all time, alongside John Bonham of LED ZEPPELIN; Keith Moon of THE WHO; and Ginger Baker of CREAM.