Florida death metal veterans DEICIDE will embark on a U.S. tour at the end of the summer. Support on the 23-date trek will come from KATAKLYSM, INTERNAL BLEEDING and BEGAT THE NEPHILIM. The tour will kick off on August 5 in Tampa, Florida and make stops in Austin, Chicago, and New York before concluding on August 29 in Spartanburg, South Carolina.

KATAKLYSM‘s Maurizio Iacono comments: “[DEICIDE frontman] Glen Benton and I have been talking about both bands touring together for quite some time now. We intended for this tour to happen last summer, but unfortunately got hit by the virus that paralyzed the world prior to announcing it. One year later, judging by the vaccine success and progress across the country, there’s finally a light at the end of the tunnel. So today, we are proud to announce one of the first metal packages to hit the road in the States since the pandemic. DEICIDE, KATAKLYSM and our friends in INTERNAL BLEEDING will take this first long-awaited step across the country. We plan to be there live and unconquered. Tickets are on sale today and will go fast. Get yours now!”

KATAKLYSM will be touring in support of their Juno nominated 14th full-length studio album, “UNCONQUERED,” which was released on September 25, 2020, via Nuclear Blast Records. With the world still in a state of chaos 6 months later, the message they would like to convey to fans is to become “Defiant” via the music video directed by Scott Hansen / Digital Thunderdome.

“UNCONQUERED” was recorded and engineered by the band’s long-time producer and guitarist JF Dagenais at JFD Studio in Dallas, TX. KATAKLYSM enlisted legendary Colin Richardson, post-retirement, to aid in the mixing of “UNCONQUERED’s” weightier and modernized sound with additional help from Chris Clancy’s technicality and precision. “UNCONQUERED” stands among the best produced albums in the band’s career. The infamous heart beast, which also appeared on “In The Arms Of Devastation“ (2006), “Prevail” (2008), and “Heaven’s Venom” (2010), makes its return with a cover image created by artist Blake Armstrong.

Confirmed dates for the U.S. tour with DECIDE, KATAKLYSM, INTERNAL BLEEDING and BEGAT THE NEPHILIM are:

In 2019, DEICIDE parted ways with guitarist Mark English and replaced him with Chris Cannella.

DEICIDE‘s latest album, “Overtures Of Blasphemy”, was released in September 2018 via Century Media. 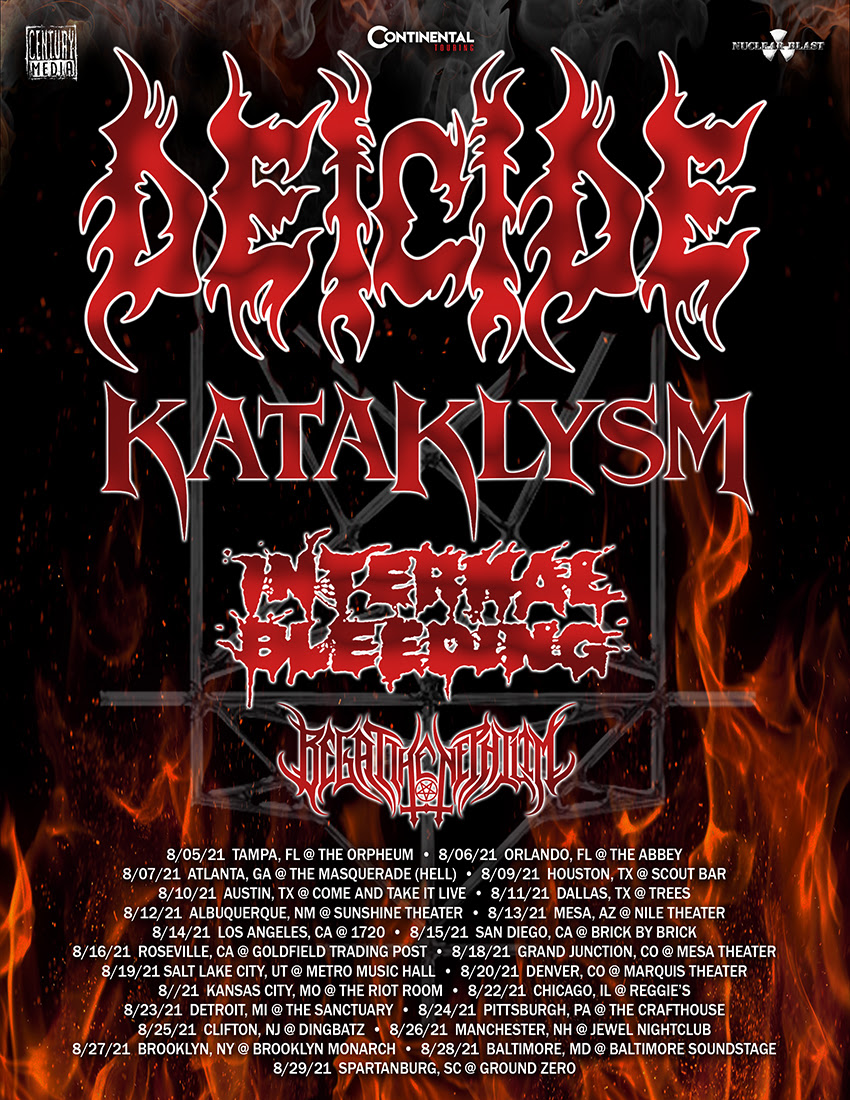