British rockers THE DARKNESS will spread their “Easter Is Cancelled” message across North America on a headlining tour kicking off on April 13 in Edmonton, Alberta, Canada at Union Hall and wrapping on May 23 in Chicago, Illinois at Park West. THE DARKNESS will play its latest album, “Easter Is Cancelled”, in full, followed by a set of their greatest hits and fan favorites. The shows promise to reflect the grand scope and vision of the new album alongside the band’s spectacular canon. Tickets go on sale Friday, January 17 at 10 a.m. local time.

Frontman Justin Hawkins states: “North America! We come to you again, humble in our mission but resolute in our purpose. Join with us in the benediction of ROCK, as we bring our ‘Easter Is Cancelled’ world tour to your spume-flecked shores. We cancelled Easter and now we are going to cancel your souls — let’s reboot together in the epiphany that only 150% pure adrenalin can bring. You are me, I am you, and music is the river that will carry us to our destiny. P.S. concert tickets available at extremely reasonable prices from all usual outlets.” 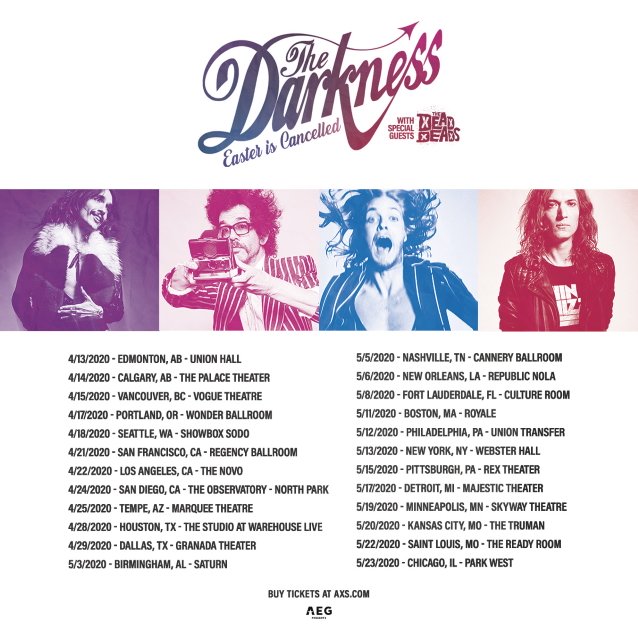 “Easter Is Cancelled” is THE DARKNESS‘s most diverse and exciting album yet, examining the role of the musician in the barbarous culture of the world today. At the heart of the tale is love, loss and heartbreak, where redemption is ultimately found in the brotherhood of band friendship and the power of the guitar. Check out our review of the album here, and our interview with the band’s bassist Frankie Poullain at this location.

Released in October, “Easter Is Cancelled” became the band’s fourth Top 10 album, having achieved over three million streams on Spotify alone. The album was released to swathes of critical praise while the previous singles “Heart Explodes” and “Rock And Roll Deserves To Die” proved a radio hit on the playlists of BBC Radio 2, Absolute, Kerrang! and more. The hilarious video for “Rock And Roll Deserves To Die” has also individually surpassed one million views.