Certain artists simply transpire versatility, and refuse to be pigeonholed in a single style. That’s the case with guitarist Ron “Bumblefoot” Thal, whose career has taken a million twists and turns since he decided to play an instrument, after listening to “Kiss Alive!” at the age of six. Having toured the world with Guns N’ Roses and established himself as a solo artist, he formed Sons of Apollo in 2017 with Mike Portnoy (drums), Derek Sherinian (keyboards), Jeff Scott Soto (vocals) and Billy Sheehan (bass). In 2019 he took on yet unusual role, taking center stage for the first time and doing vocals for Asia on “The Royal Affair Tour”.

While Sons of Apollo have put the finishing touches on their sophomore album “MMXX” and are about to embark on a world tour early in 2020, Bumblefoot is again on the road, doing guitar clinics and intimate shows in the form of storytelling. These are small scale concerts where he plays by himself and/or with the help of a sequencer, and shares anecdotes of his lengthy career. 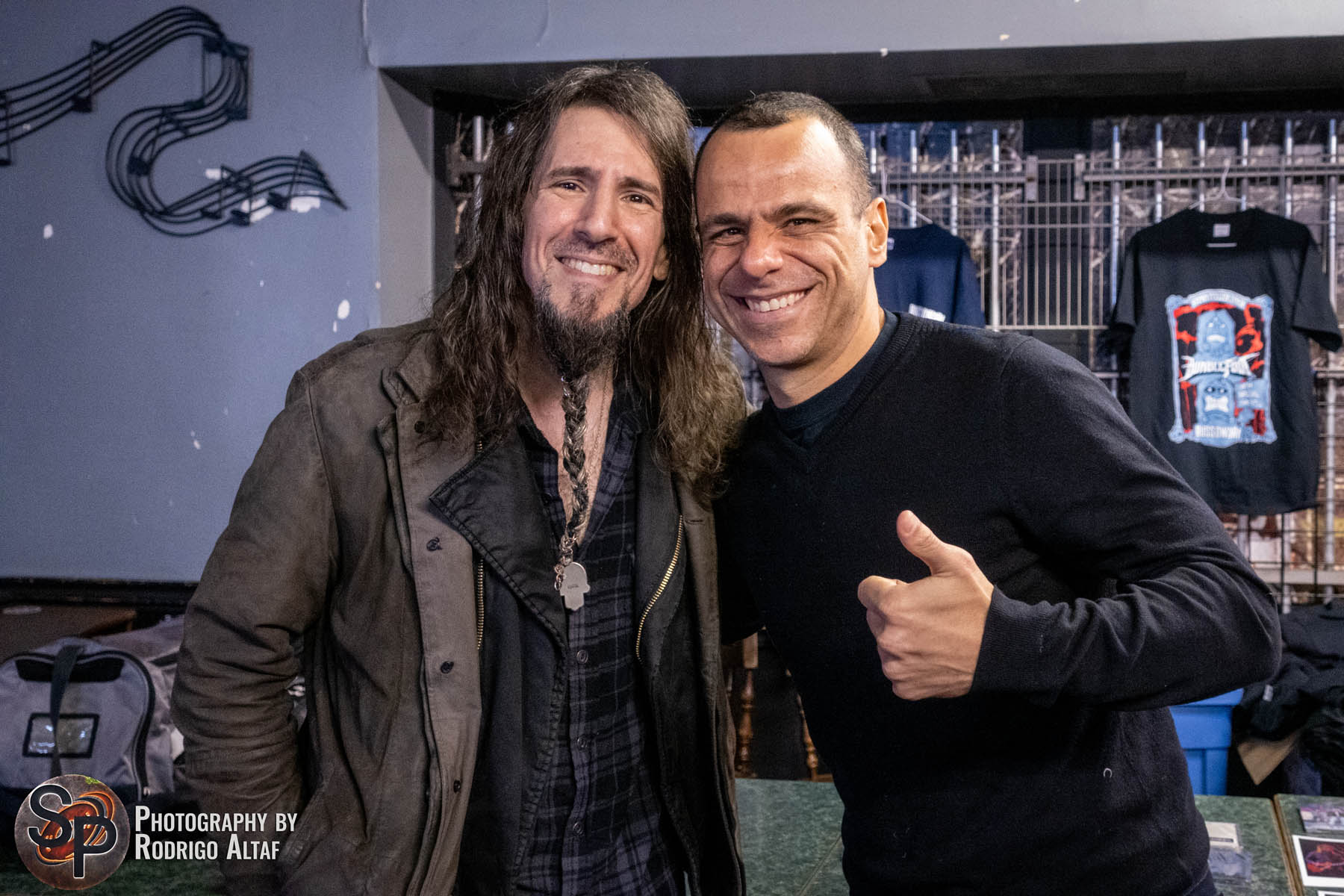 With dates in the U.S., Mexico, South Africa, Israel, Europe and The United Arab Emirates this year, November 1st was time for Toronto, Canada, to experience this show. Our collaborator Rodrigo Altaf was there to document it, and had the chance to do an interview with Bumblefoot just before the show, which you can listen to below. Also check out Rodrigo‘s impression of the night accompanied his own photographs.

I have been a music fan since the age of nine, and obviously I have seen my share of concerts since then. And while I still admire a very coordinated and structured show, like Iron Maiden, Dream Theater, Rush and other bands do, at this point in time I’m more impressed with improvisation and unique moments on stage, such as the ones witnessed on Bumblefoot’s show at The Rockpile this November. And that was the case not only with the headliner, but with all other acts that played.

The show started with the Rush tribute band Permanent Waves. With Andy Narsingh on bass and vocals, Dave Langguth on drums and Russel Gray on guitar (doing his first show with the band), they rocked the house with timeless hits like “Distant Early Warning”, “Limelight” and “Tom Sawyer”. Bumblefoot joined them for blistering versions of “Spirit of Radio” and “YYZ”, and both guitarists did some of the missing keyboard parts, which made for interesting arrangements of the Rush classics. 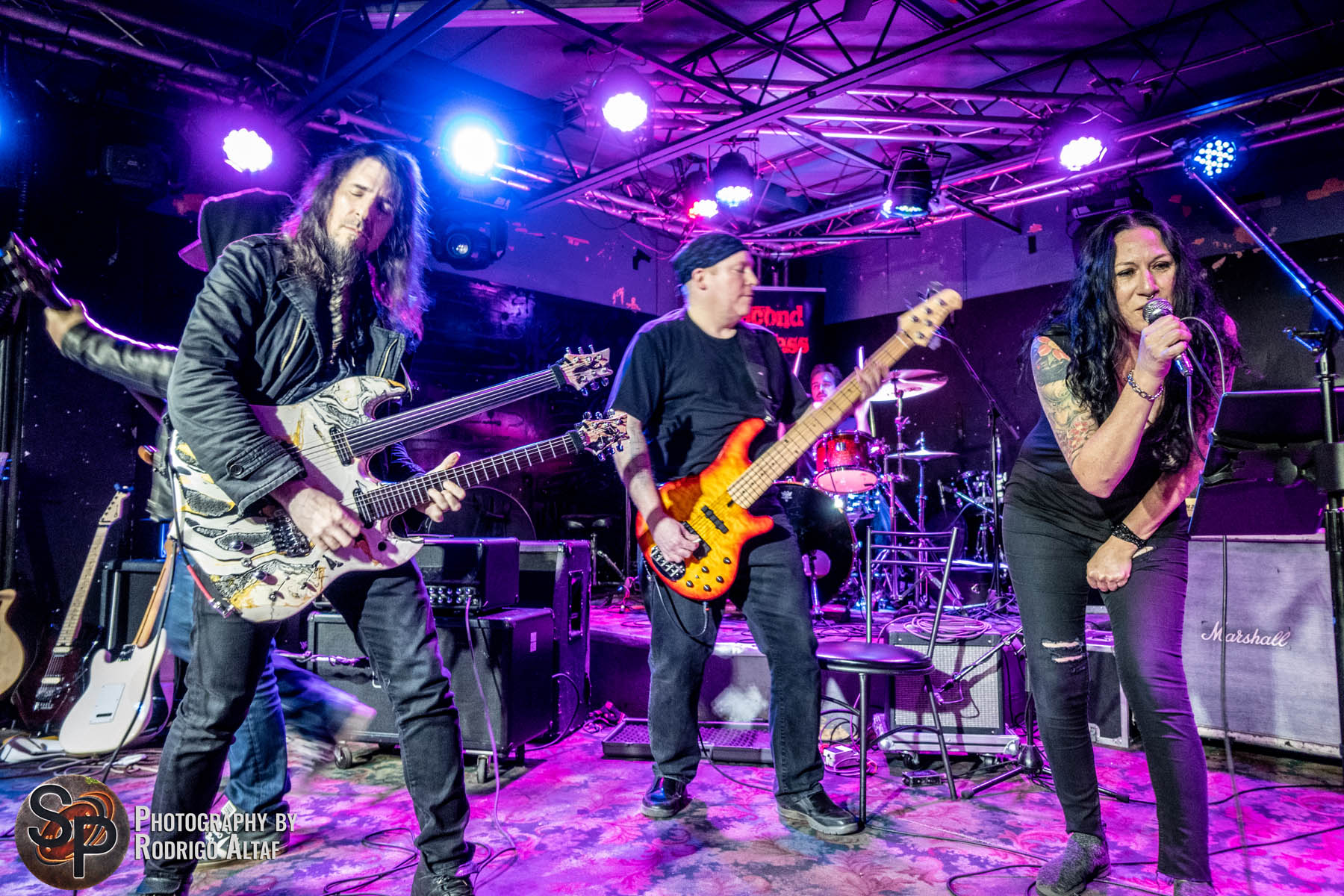 Bumblefoot on stage with Second Pass

Up next was Second Pass, which displayed their grunge and stoner infused sound, with the commanding presence of singer Veronica McNamee. Having played Rocklahoma, and supporting acts like 3eeth, Art of Anarchy and Papa Roach, they have a few albums under their belt, their set was made mostly of original material, such as “Bigger than You” and “Smiling Deadly”. The only exception was Guns N’ Roses’ “You Could Be Mine”, where they were joined by Bumblefoot, and a visibly emotional Veronica delivered the performance of her lifetime.

Originally from Oshawa, Ontario, the KiLLeR DWaRfS received a lot of recognition since their inception in 1981. Through ups and downs, breakups and reunion tours, they are still together, and planning a new album in 2019. And while that doesn’t happen, singer/guitar player Russ Dwarf (yes, all members of the band have Dwarf as a surname, in true Ramones style) is also planning a new album, and has been touring non stop with his band. Their sound is a mix of hard rock from the 70’s with folk influences of artist like Bob Dylan and Bruce Springsteen. Enter huge choruses, as shown on set opener “Come On”, and soulful ballads such as “Miles”. It would be a missed opportunity to not dust off some of the KiLLeR DWaRfS material, and of course “Keep the Spirit Alive” made it to the set. Russ was also joined by the DWaRfS’ own Gerry Finn (or should I say Gerry Dwarf?) on a few tracks, but inexplicably, Bumblefoot did not come on stage as he did on other occasions. Perhaps it was a curfew issue, but sadly, nobody explained why. 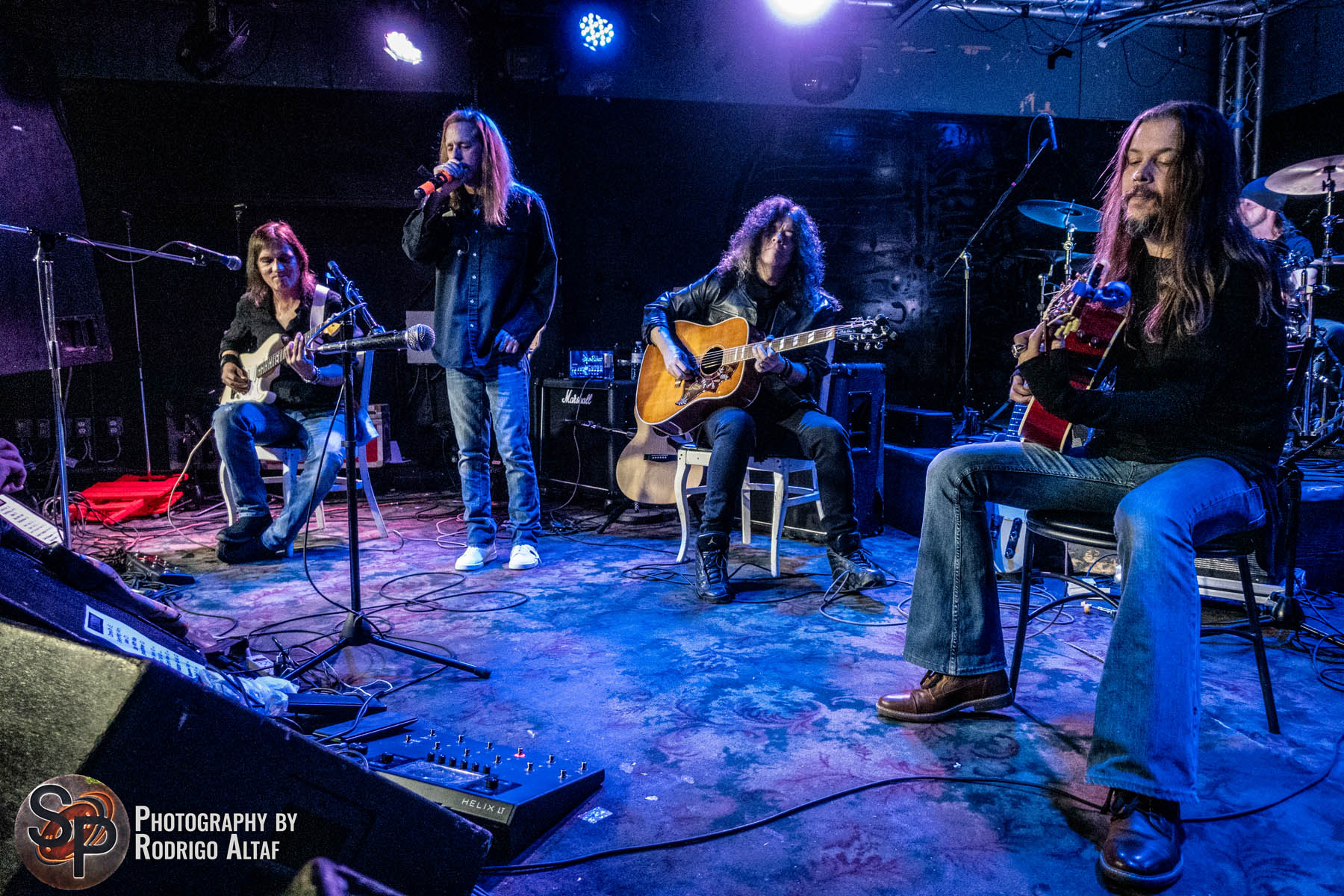 As the Russ Dwarf band members and roadies were still packing up their gear, Bumblefoot started to set up his show all by himself, and started playing even before everybody left the stage. As can be seen in the interview I did with him, he was really sick, and didn’t sing much during his set. Instead, we were rewarded with stories from the road, his experience as he reached 50 years old, and some of us were even lucky enough to be able to try “Bumblefucked”, the hottest sauce he’s releasing.

With the help of a sequencer, Bumblefoot seemed like inspector gadget, bringing out different weapons from his seemingly endless arsenal of licks and riffs on every song. Of course his own interpretation of the Pink Panther theme was played, with amazing crowd engagement. He then told the story of his infamous jacket, which didn’t go unnoticed with other members of Sons of Apollo while on tour, and how he traveled to a different town to try to prove to Billy Sheehan that he always smelled great, regardless of how much he wore it. Speaking of Sons of Apollo – or Sons of a Pollo, as Ron called them – he used his mobile phone to provide the background to what is arguably his best solo to date, on the song “Signs of the Time”. 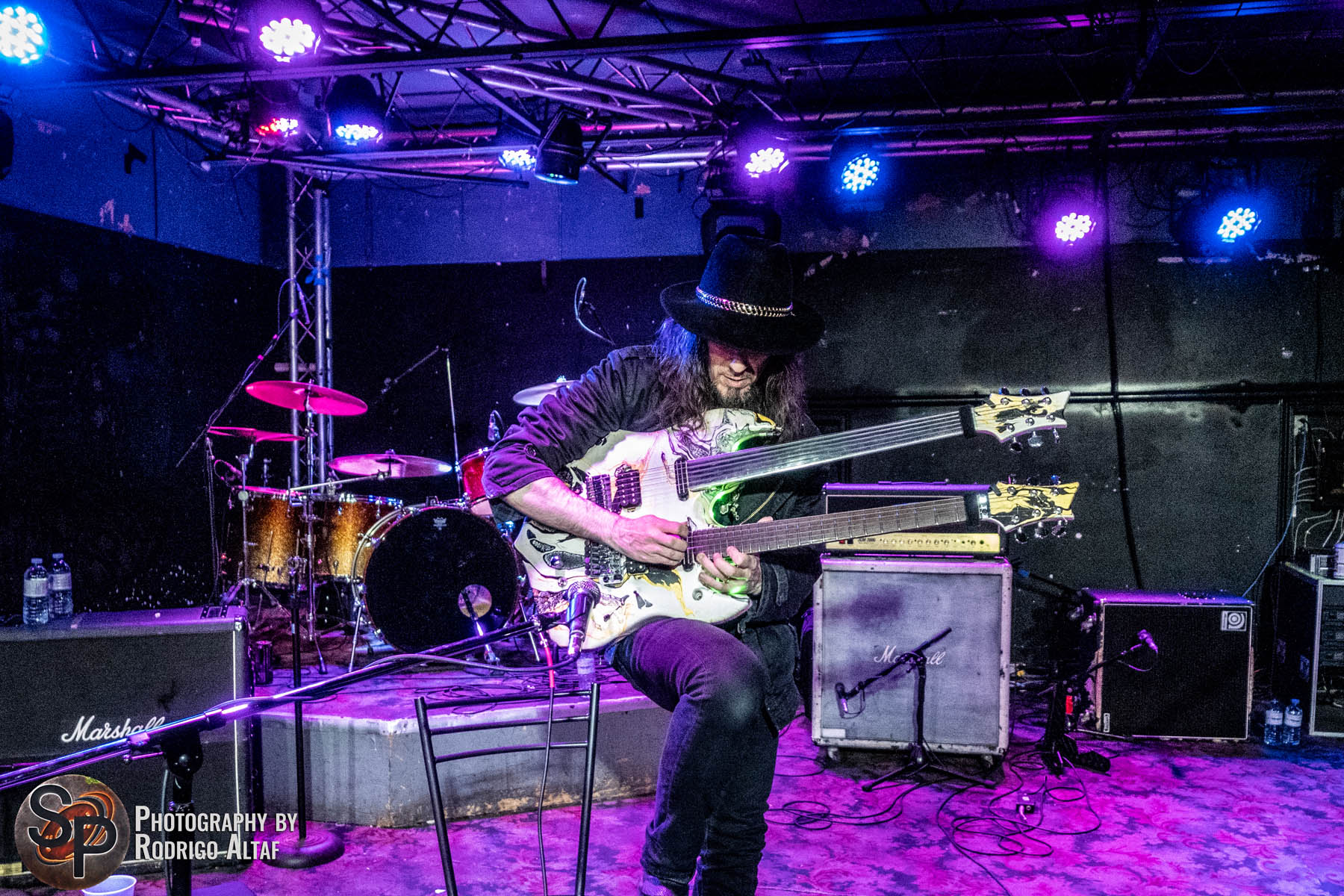 Highlights of Bumblefoot’s prolific career were also played, such as “Little Brother is Watching” and “Don’t Know Who To Pray To Anymore”, with him doing the verses on guitar as opposed to singing them. He took classical pieces from up his sleeve as well, “on the scale of Yngwie minor”. While it was really a shame that he was sick (according to him, from contracting Ebola from a penguin in South Africa!!), he more than made up for it with many jokes and anecdotes from life on the road. At some point he considered playing Queen’s “Somebody to Love”, but his cough was really bad, so he played something else. No complaints in sight though, as he started to take requests from the audience and rewarded us with unique versions of Malmsteen’s “Far Beyond the Sun” and many other covers. He kept on playing until the doors were shut and lights were officially out. At fifty years old, Bumblefoot admittedly doesn’t give a rat’s ass and plays whatever he wants, if and when he wants. Lucky was the audience, who was treated to a no-holds-barred, all-or-nothing kind of show, never to be repeated. There are still a few dates until the end of the year, and in 2020 he will most likely focus on Sons of Apollo only, so hurry up and grab your tickets to see a guitar player in a class of his own!