“Sweet Mother of Jesus! It’s…Olias of Sunhillow!” Those dry words fell out of the mouth of none other than Roger Dean as he spotted the Olias t-shirt that I was wearing while perusing his gallery. Like a deer caught in the headlights, I quickly realized my faux pas. For, unlike the many Yes albums of the era for which Dean famously created the cover art, he had ultimately NOT been commissioned to design Olias although initial overtures had been made (the album credits thank Dean for “Planting the seed” via the Fragile cover). Perhaps it had left a bad taste in his mouth regarding Jon Anderson? Perhaps I was insulting Dean by bringing this better-left-forgotten memory into his studio? “Not to worry,” he laughed it off and went on to explain a bit about the conflicted timeline which ultimately had sent Anderson off to David Fairbrother-Roe for the remarkable realization of the elaborate sleeve design.

There are countless tales regarding the legend of Olias, Jon Anderson’s first solo album recorded during the break between Yes albums “Relayer” and “Going for the One.” Hailed as one of the best-ever solo albums from a Yes man, it found Anderson performing the entire 45 minutes by his own hands – a true “solo” album. Though there has been speculation that he may have brought in his mentor Vangelis to help on parts of the recording – as some of the performance just sounded too polished for a “mere vocalist” in a rock band to pull off – those accusations have been consistently refuted and instead reveal what a talented artist Anderson truly is. Indeed, Anderson saw this as his rite-of-passage album where he became a true card-carrying “musician”. As most will attest, it is quite a remarkable and impressive recording which he achieved during three months locked in his studio, going slightly mad as he pushed back deadlines to finish his solo masterpiece.

For any readers who aren’t already familiar with the magical universe herein, imagine Yes at its most fanciful and mystical, offering a concept story of four tribes – each representing a different aspect of musical consciousness – who come together to escape their planet before it is engulfed by a volcanic disaster. While not reaching the virtuosity of his fellow Yes musicians, Anderson’s performance still goes remarkably beyond what would later be called New Age music (including his own Angels Embrace and Toltec albums). “Olias” is truly a standalone recording unlike any other, defying categorization and yet realizing a very progressive ethos.

Yes sound engineer Mike Dunne was Anderson’s only main companion, handling the tech side of the recording. But even Dunne was not up to the task of synching up 4 disparate sections of music together as it was transferred onto 24-track, without a click track to help, and ultimately left Anderson alone after three exhaustive days of fruitless attempts. The situation called for divine intervention and in appropriate Andersonian fashion, the Gods somehow helped splice the tape together perfectly in the middle of the night… Anderson fell asleep while toiling away and has no memory of what happened but when he woke up the following morning, the recording was miraculously synched up. He wept tears of joy in the dawn’s light. 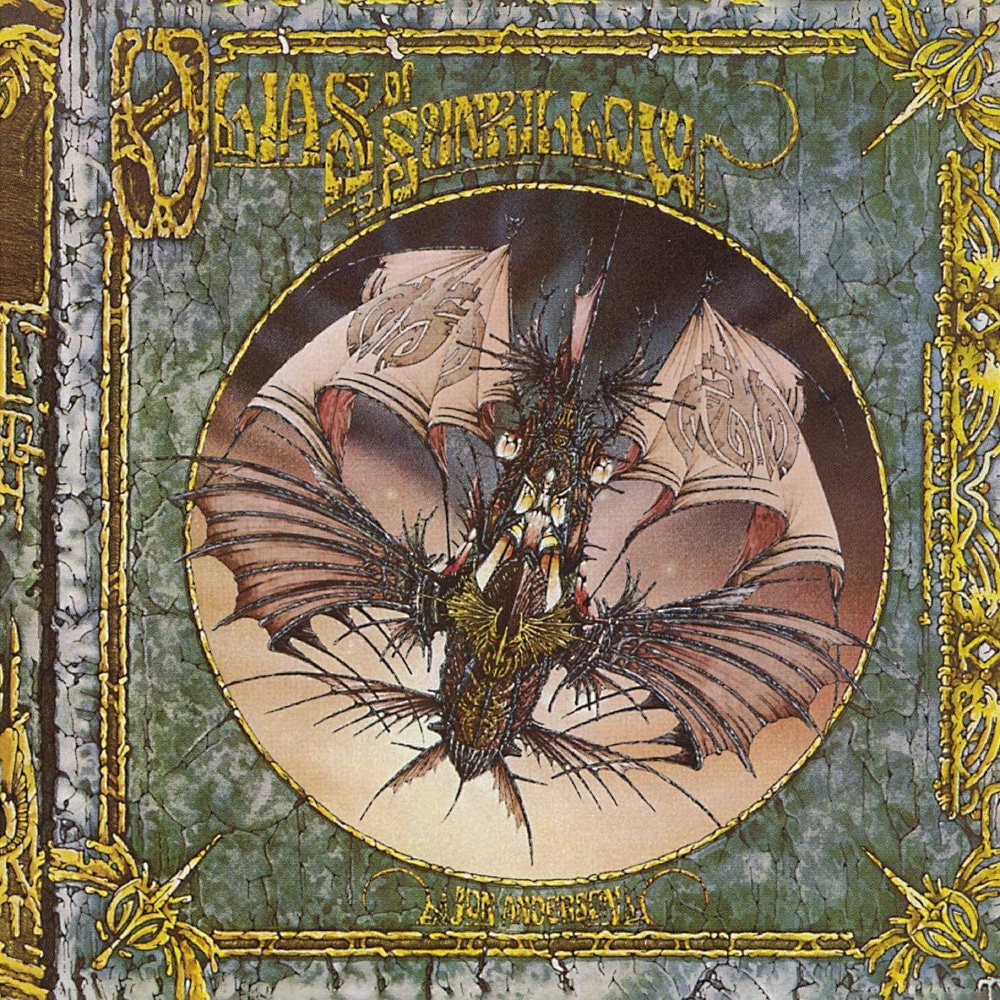 Over the decades, the legend has grown. So too has the demand for a sequel which purportedly is called “Zamran” and has already been written and re-written without reaching a conclusion. “I’ve written it out four times now and it still doesn’t read correctly yet,” Anderson told me in 2019. “It’s about the formation of the planet and how the ley lines were created and all the sacred sites were created and who did it, it’s that kind of an in-depth concept. I got to get it finished cause I’ve got four hours of music based on it as well!” Hopefully the various attempts won’t start collecting dust in his garage along with the countless other projects he has worked on but never completed which are reportedly stored there. (The recent “1,000 Hands” album was a happy exception, thanks to producer Michael Franklin ensuring that it got finished and was finally released 30 years after its inception)

In the meantime, Esoteric Recordings has seen to it that the original “Olias of Sunhillow” sounds as pristine as possible with a fresh remaster of the album and a 5.1 surround sound “up-mix” derived from the original master tapes. The caveat here is that this is not a true remix of the album: the multi-track masters of the album cannot be found despite extensive search. Perhaps they should have looked in Anderson’s garage. Thus, avid audiophiles are going to experience pretty much more or less what they remember from before, just a little bit shinier. Still, this is “Olias of Sunhillow” we’re taking about, and thus many of the faithful will want the absolute best representation of this classic, meaning that this Esoteric remaster is a must especially if you have a 5.1 system just begging for the percussive break of “Naon” to surround you. In addition to offering the best-possible soundscape, the extensive liner notes fully restore the stunning original artwork and also feature a booklet with a new essay and exclusive interview with Anderson. A host of promo clippings, drawings and music scores adorn the bonus booklet along with tales like Atlantic Records president Ahmet Ertegun beholding the album cover for the first time and, confused, asking, ‘I can’t read the title. What is it?’. Whoops. Can’t blame Dean for that one.

While the Olias material hardly got a live airing in concert at the time of its release (most of the solo material was dropped early on in the tour in favor of Yes classics), Anderson has recently come back to a few pieces during his masterful ‘1,000 Hands’ tour. “Flight of the Moorglade” and “To the Runner” both received breathtaking arrangements from his talented band and one more piece unexpectedly made an appearance in an unlikely place: “We get into the end of ‘Starship Trooper’ and we go into the song ‘Solid Space’ which is from the ‘Olias’ album, and it really works!” he excited told me. But would he ever consider doing the entire album in concert from start to finish? “Well…well, that’s a good idea! I actually never thought about that. I think we were just testing the waters in the acoustic section in the middle of the [1,000 Hands] show to see how it feels and everything. And I notice that maybe if you’ve got an audience of a thousand people, there’s probably about a hundred people that know ‘Olias’ inside out…and they’re very excited about it! So it’s a delicate dance to go on stage and perform something that most of the people that don’t really know that well.” Maybe the idea of playing all of ‘Olias’ in one special concert that people fly to see, rather than touring it? Jon thinks for a moment, “Like you say, to put together the ‘Olias’ album with visuals and everything else that’s in my mind…if we were able to do it as a one-off concert and then invite people who know the album to come to that concert, that takes a lot of organization, I’m sure, but that wouldn’t be a bad idea. It would be fun!”

Until that day, and indeed until the day that any type of live concerts can make their return, pick up this new edition and return again, return to the stars. As Anderson sings, “As we wait for the call to ascend to the stars, all to enter your heart to your love, to your love. Through change of dawn see, peace will come, peace will reign, all along our days, see your love, see your love.”

Disc One – Olias of Sunhillow Remaster