Like They’ve Never Been Gone: THE WINERY DOGS Rock the USA

“Who let the Dogs out?” This aptly titled tour indeed begs the question: Who? When the announcement came that The Winery Dogs were going to do a short tour in May, it came as a welcome surprise. Three years since they were last seen, with little buzz or talk of any activity as of late, one has to wonder “who”…or “why”? Fortunately, the question of why is easily answered: to rock out with a frenzied fan base who are only too happy to welcome back this heralded power trio, whatever the circumstances might have been to prompt their reconvening. After a run of two excellent studio albums and heavy touring a few years back, the Dogs took a “break” in late 2016 which likely became extended because Richie Kotzen wanted some time back to devote to his solo career, releasing “Salting Earth” and touring with his own trio. Fellow Dogs Mike Portnoy and Billy Sheehan easily made use of the time, with Portnoy even starting yet another whopper of a band, Sons of Apollo. But they had always left the door open for more Dogs activity when the time was right, and apparently a run of 22 live dates in the States is the first step. 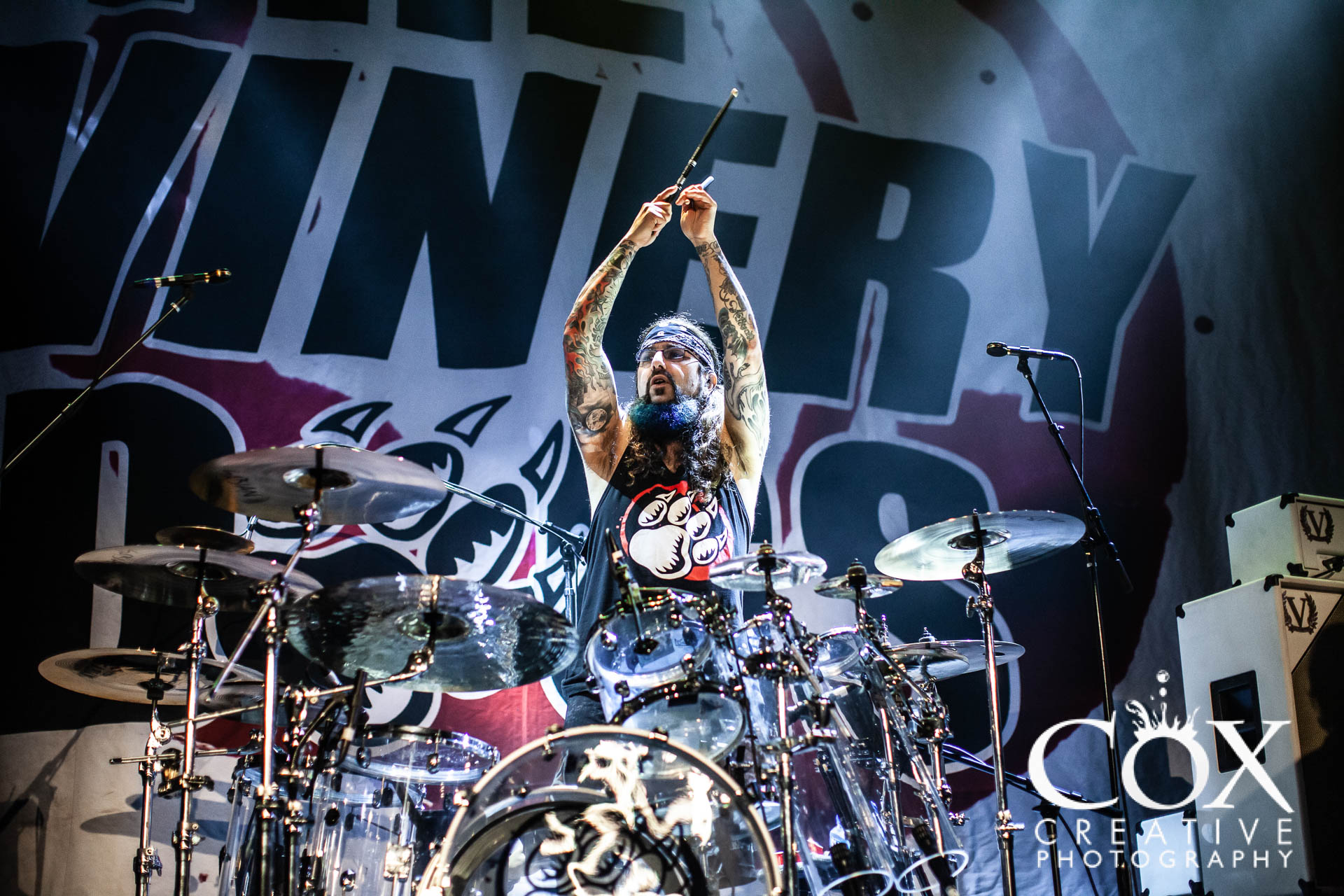 Denver’s Oriental Theater was well attended on a weeknight considering minimal buzz or publicity for this surprise visit and once they hit the stage it felt like the band had hardly been gone. The best way to describe a Winery Dogs show is as a highly charged three-ring circus, making it very difficult to choose which musician to focus on. Look away from Billy Sheehan for a second and you’re likely to miss seeing how he made the impossible sound that just emanated from his bass, but at the same time Kotzen is scatting vocals while his fingers dance over the guitar fret-board. Meanwhile, Portnoy always commands attention from his throne on the drum riser as one of the most astounding drummers in the rock world and sporting a brand new translucent kit which is a beauty to behold. It’s a good thing the band did not invite a fourth or fifth musician, lest the audience’s heads explode.

The opening tracks to both Dogs albums are absolutely killer ways to begin a recording or a live performance, and on this tour they have chosen to go back to their first single “Elevate”. No time is wasted to ease in to the show with an opener like this. With fingers flying and smiles radiating on every face, the crowd instantly understands that nothing has been lost in the three years of downtime. The band has chosen to take the audience by storm with a one-two-three punch as “Captain Love” and “Hot Streak” follow “Elevate”. Although they are playing in clubs and small theaters, this is the kind of material that fills arenas. In a just world where rock was king like in decades gone by, The Winery Dogs would be cheered by thousands upon thousands. Nevertheless, this audience still sounds as enthusiastic as a crowd three times their size. “Hot Streak” is particularly engaging as the spacious arrangement allows Portnoy’s percussive attack to shine, and Kotzen’s vocals to come to the fore. The “Time Machine” then rumbles into the theater, a fan favorite that is written to feature satisfying fills from all three members. 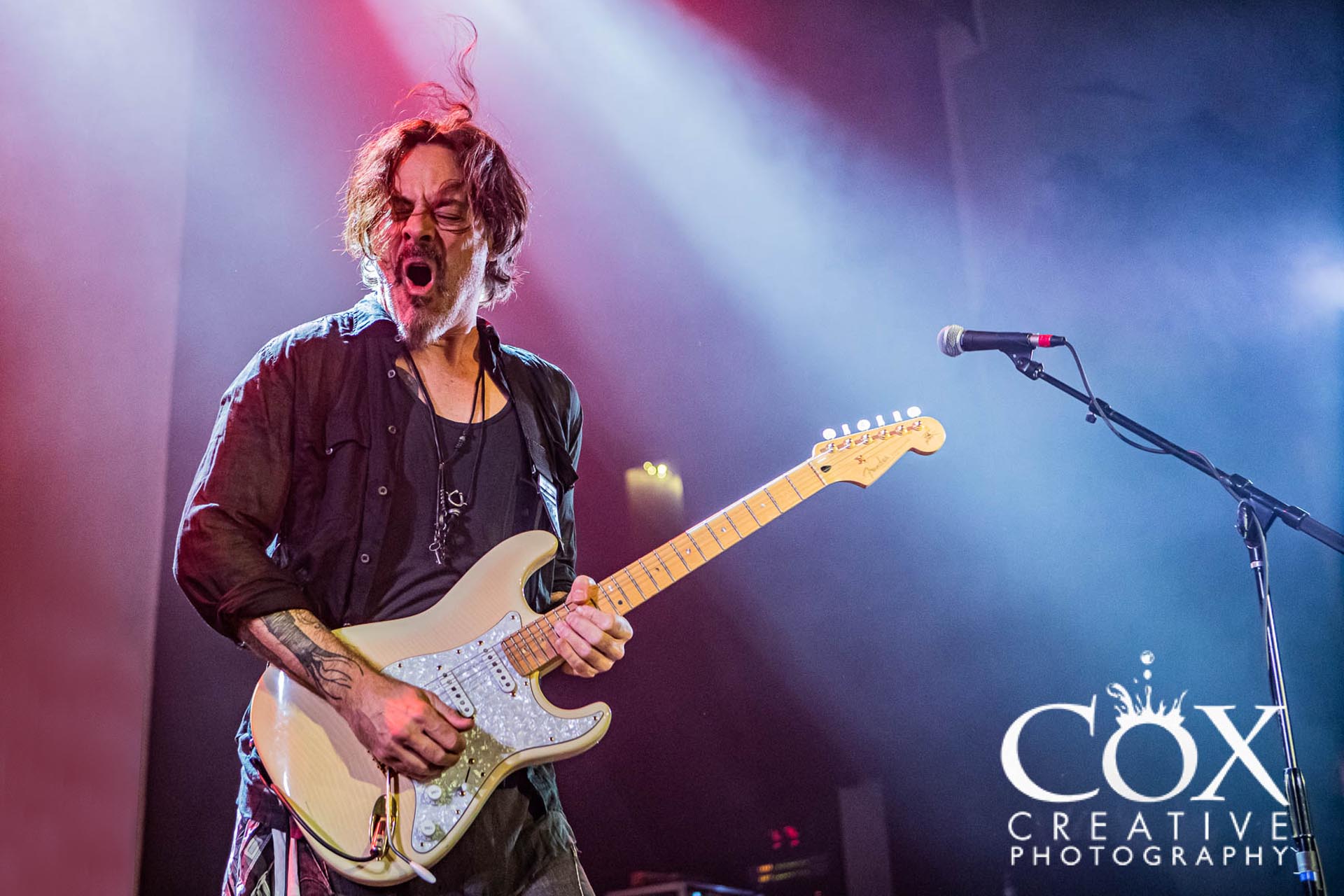 One of the band’s secret weapons is Kotzen’s soulful vocals which gives a more vulnerable dimension to the repertoire. “Damaged” lets him go there, and also provides a bit of a breather for the audience before “The Lamb” picks up the intensity again. And here we discover another of Kotzen’s secret weapons: the extended guitar-solo jam. This occurs several times in the evening and seems to bring the entire concert experience one notch higher with each virtuosic display as the band gives space in the arrangements to improvise and flex their musical muscles. “The Lamb” being the first such example, Kotzen’s solo is truly tear-inducing and when he and Sheehan turn to a few hints of “While My Guitar Gently Weeps” the audience is hit with both emotion and awe simultaneously. “The Other Side” again offers one of these special jams as the band break it down into a quiet shuffle allowing Kotzen to go to town.

Now it’s Sheehan’s turn to stand in the spotlight with a solo section. While it feels like the entire concert has already been a bass masterclass, the intensity is turned up for the next 6 minutes as two-hand tapping madness ensues. Simply put, a Billy Sheehan bass solo is something that everyone should experience at least once in their life. No one will probably look at the instrument in the same way again. “Ghost Town” is a nice followup, with a verse as smooth as a John Mayer single. That soulful voice comes back as Kotzen takes to the electric piano to play his solo song “The Road” before being joined by the band for a spirited rendition of “Regret”. Beautiful songs like this just don’t come from your average hard rock bands, especially in a live context. One additional factor that hasn’t yet been mentioned is that most of the songs feature all three members singing together at various key moments in the verses or choruses, just one more aspect that makes this band is truly special. How Portnoy or Sheehan can sing in between their relentless pace is a mystery that only musicians of that caliber can understand. The band roll on through the rocker “Devil You Know” and single “I’m No Angel”, simply two more excellent songs from the repertoire, until we come to another emotional highlight in “The Dying”. This longer piece brings an intensity from the entire band that leaves the audience breathless…but somehow the Dogs continue and pound us into “Oblivion” with a rocking tour-de-force that closes the set. 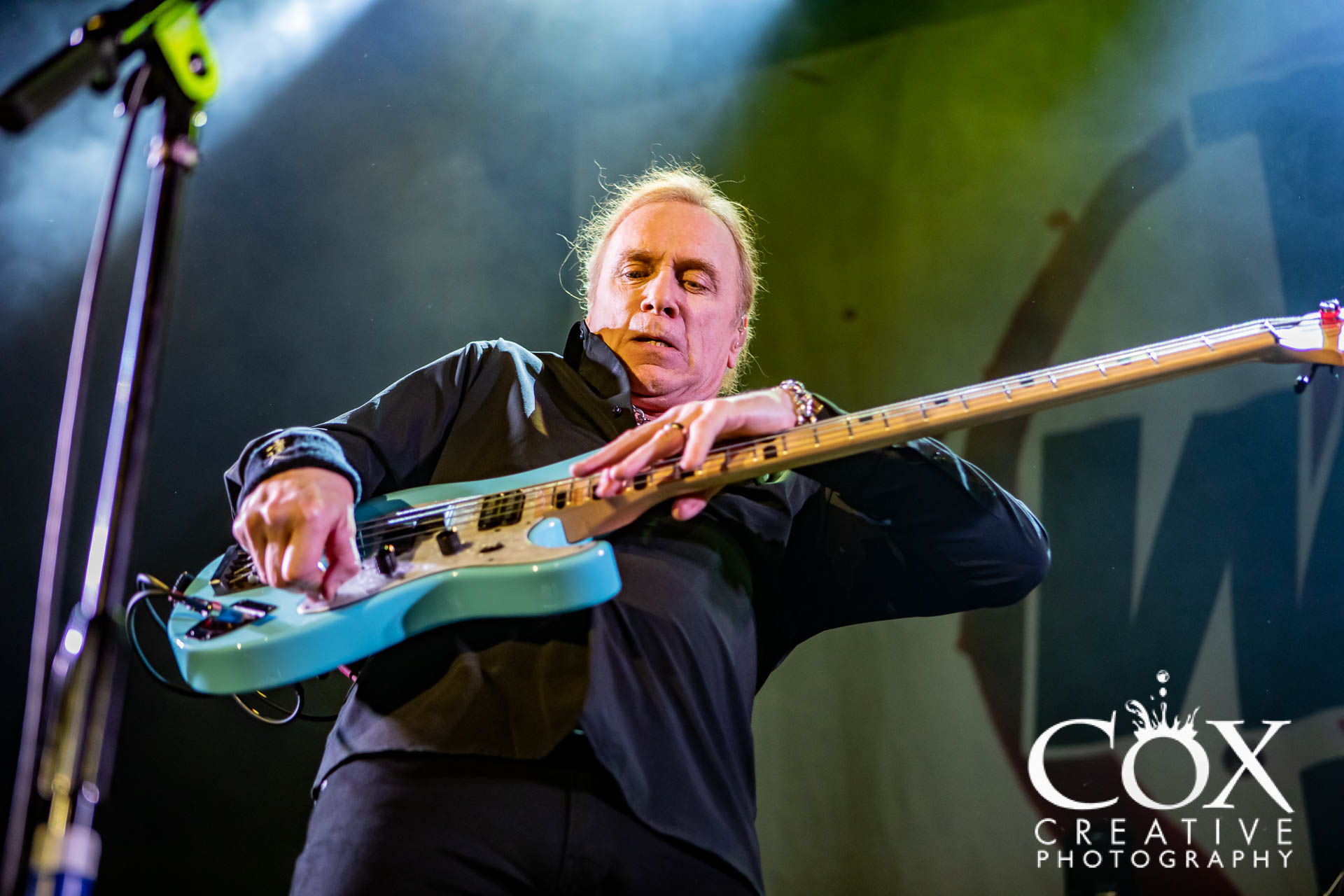 Two songs remain for the encore, one being a cover of Elvin Bishop’s “Fooled Around and Fell in Love” which the band also played on their first tour. While it might seem an unlikely choice, seeing it live will make you a believer as Kotzen enlists the audience to carry the chorus for most of the song, and it seems to carry more energy now than when the band played it years ago. “Desire”, always a favorite, carries the show to a passionate end with the band coming out to smile and connect with the adoring crowd. At only 90 minutes, and nary a breath in between songs, the concert feels surprisingly satisfying and complete, probably because there have been about five times as many notes played as at any other concert in recent memory. Happily, the Dogs announce that they will be back much sooner than the past three year hiatus, and with album number three in tow. It sounds like this short romp across the country was partly intended to re-kindle enthusiasm and inspiration within the band itself, and in that regard they certainly seem to be successful. There is no doubt that on the level of audience appreciation they have hit a home run, and that everyone in the crowd hopes the Dogs will not need to be let out again…they should just stay out and run free.

Fooled Around and Fell in Love (Elvin Bishop cover) / Desire