The new year is starting off with a bang as the mighty Sons of Apollo return to the road to support their sophomore album, appropriately titled “MMXX”. Although their North American tour is only 14 dates long – to be followed by a month in Europe and a brief South American visit – the band have been buoyed by strong album sales of their new release. Judging by the crowd’s reaction last night in Denver, the band is also feeling the love from the audience and that must make for a satisfying experience as they walk off stage to the sounds of Van Halen’s cover of “Happy Trails” closing the evening. This “five-ring circus” is comprised of rock veterans Jeff Scott Soto on vocals, Billy Sheehan on bass, Ron “Bumblefoot” Thal on guitar and head-Sons Derek Sherinian on keys and Mike Portnoy on drums. In addition to the obvious influence of the Dream Theater legacy, the band’s sound takes its inspiration from a wide range of hard rock and metal bands, with a smattering of prog thrown in. Given the heritage of these musicians, much of that influence grows out of the very bands that they themselves have been in these past many decades. All of this was on display during their performance at The Oriental Theater, and judging from the smiles on and off stage, they’re meeting their mark. 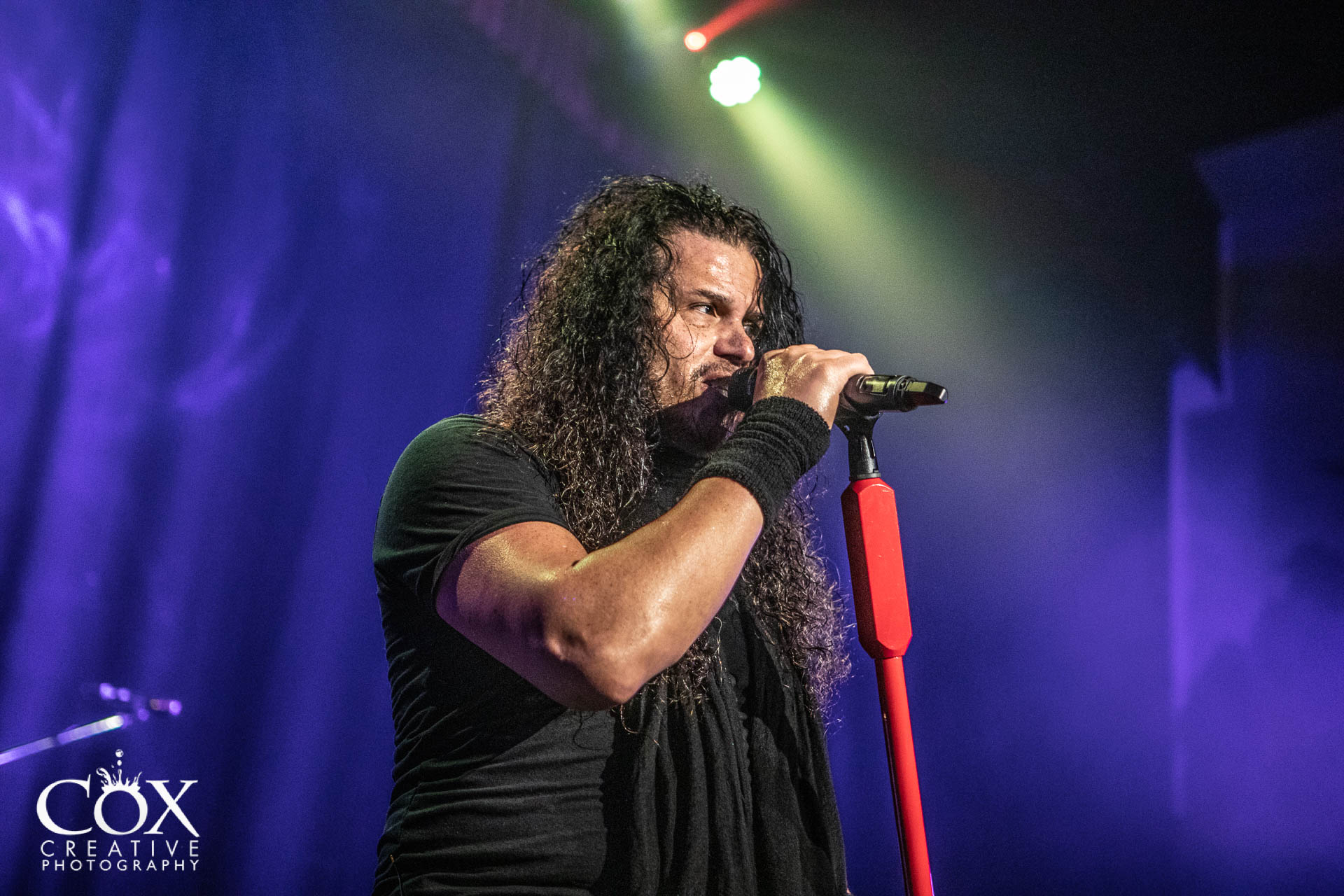 The second album comes off as more hard-hitting than the debut, and this held true in concert as well. The set-list was stacked to pummel the audience for the first half of the show with most of the band’s edgier songs. Indeed, it wasn’t until the ninth song – “Desolate July” – that there was a sense of taking a breath, and a deep breath at that, given the subject matter. But not to get ahead of ourselves. Opening with “MMXX”’s two lead singles, “Goodbye Divinity” and “Fall to Ascend”, the Sons grabbed the audience by their throats and rarely let go. Soto is a great front-man, establishing a commanding presence with a balance of professional seriousness and playful trickster energy, as he wields his red mic stand with seasoned poise. His voice held up throughout the show, amidst many a “Yowwww!” screech that could blow out the pipes of a more novice singer. A couple of small points could be improved over the course of the tour, such as not introducing Portnoy while he’s just started his raucously intricate opening drum fill for “Fall to Ascend”. We want to hear every glorious hit of that intro uninterrupted. The connection between band and audience seemed to really deepen during third song “Wither to Black” when a two minute diversion into “Tom Sawyer” served as an unspoken tribute to Neil Peart which brought the entire room together. There’s a brief reference to the Rush song on the studio version, but here they rightly lengthened it to include Peart’s famous drum fills which Portnoy has likely known how to play for nearly the past 40 years. 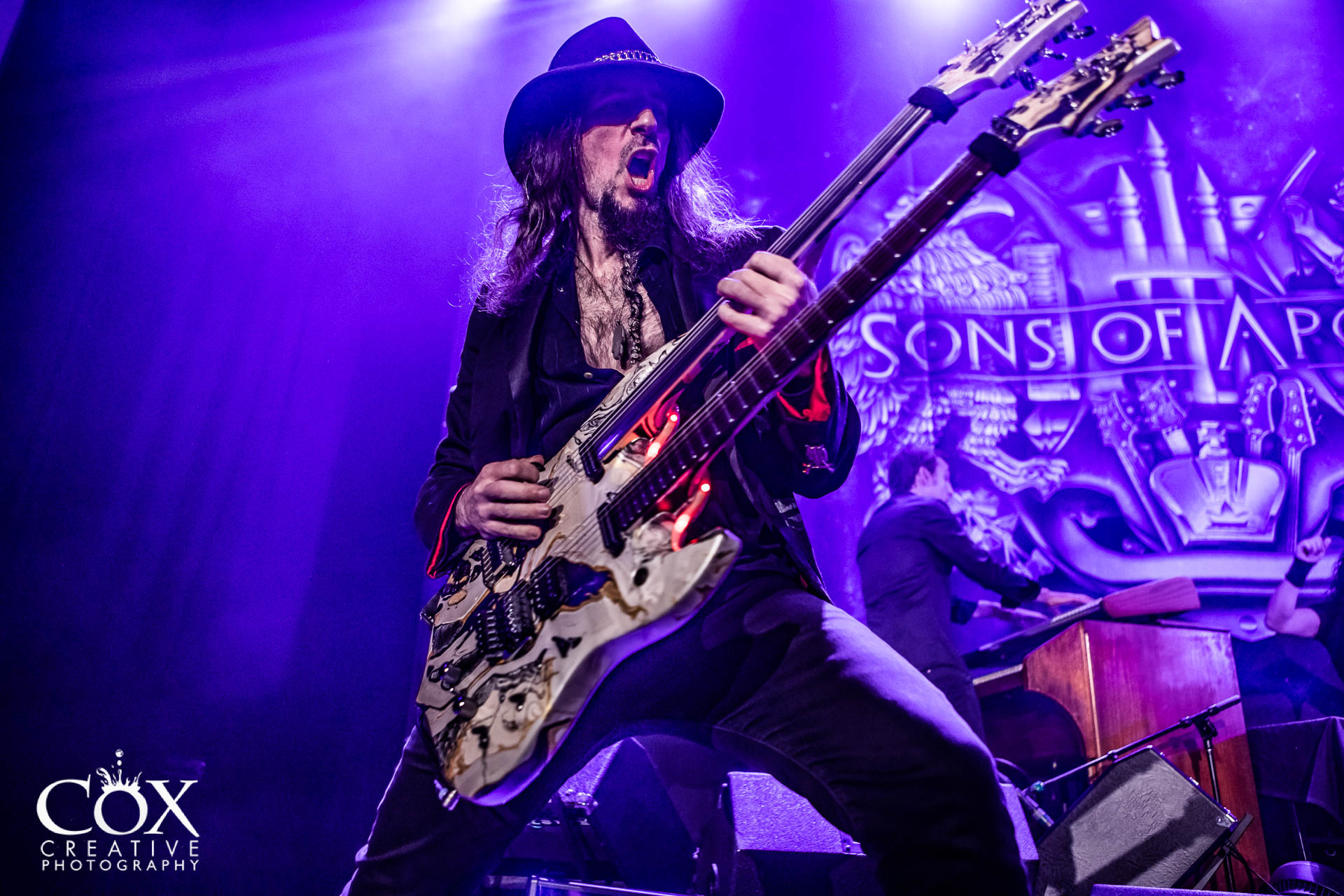 Bumblefoot is one of the band’s secret weapons whose vocals and sense of humor are only outmatched by his dexterity on the six strings. Well, more than six really, considering he donned his signature double-neck guitar all night, one of which is fretless. In case you missed it, he toured last summer with the band Asia as the voice of John Wetton – along with being the hands of Steve Howe when Howe wasn’t on stage himself – proving that he is no slouch in the vocal department. So it was with ease that he took a vocal spot on “Tom Sawyer” and occasional other choice moments, though provided backup vocals for most of the evening. His solo’ing abilities are on par with the best in the business, and he usually shreds while putting one foot on a monitor amp to offer more access to both guitar necks which he navigates with ease. At times his fury of notes got lost in the mix, a challenge to hear over Portnoy’s well-mic’d drum kit in a hall like this, but the energy behind his delivery was still well-conveyed to the audience. 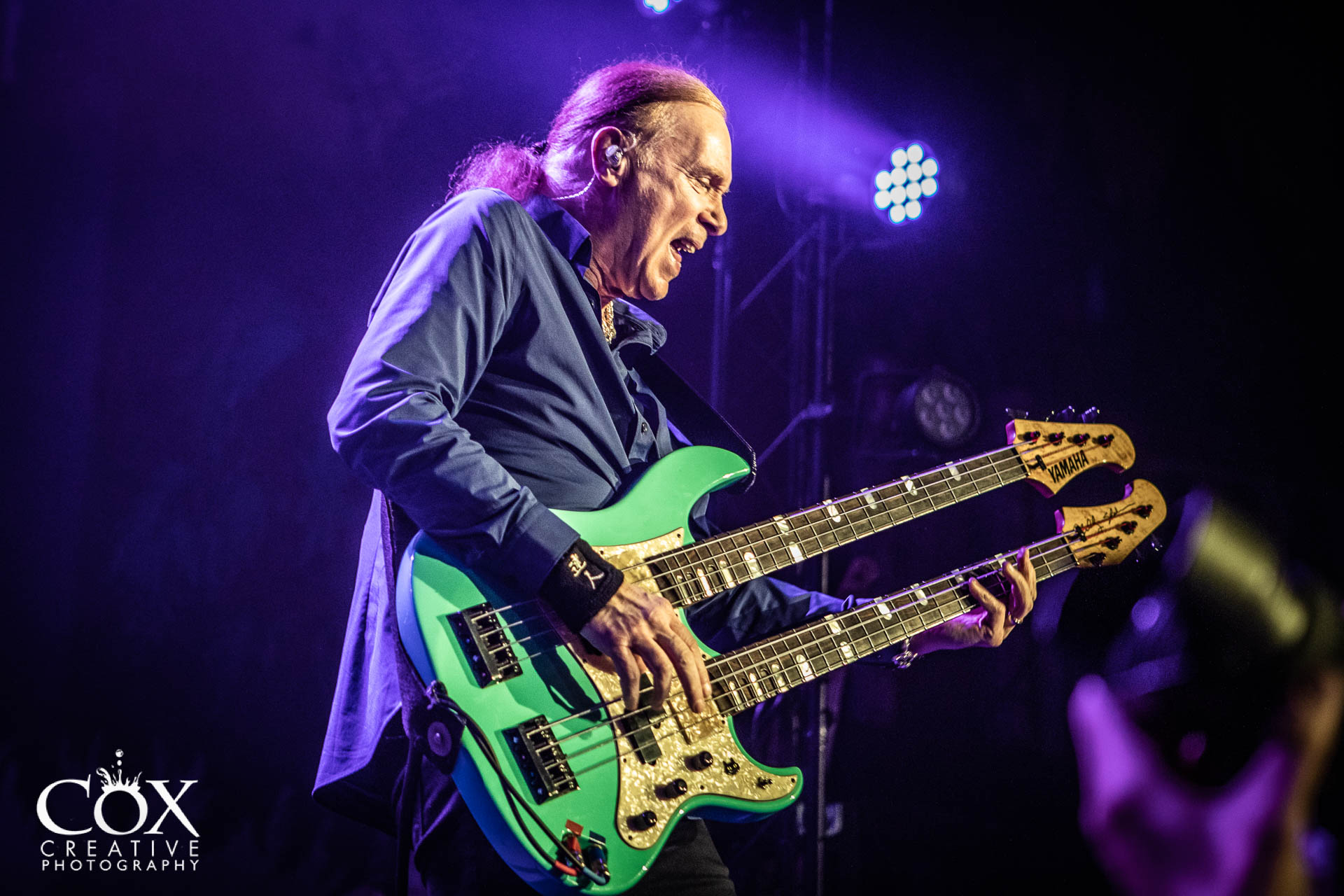 When my friend commented to me that Billy Sheehan has reached the age of 66, it seemed impossible to believe as we witnessed the signature Sheehan bass solo spot. No matter how many times you may have seen this segment, it’s always jaw-dropping. The hammering-on of his spider-like fingers seems inconceivable until you remember that he has been performing at this level for longer than most rock players have been alive. Always bringing class and virtuosity to the stage, Sheehan is a true gift to have in this band.

Derek Sherinian came to the fore literally on one of the new album’s highlights “King of Delusion”, as a separate electric piano was brought towards the front of the stage to highlight his performance. When he and Portnoy shared a short duet on piano and drums for the song’s middle section it was a reminder of how versatile this band truly is. The song was also one of the best of the evening, as a 9-minute piece allows the band to travel through many different moods, yet keeps more focused attention than a 17-minute epic. Elsewhere during the show, Sherinian held a focused reign on his keyboard station, always the showman with a brooding countenance and choice patches that take the songs in unexpected directions. Whether during his solo spot or in a mid-song jam, his drenched organ onslaught was extremely satisfying. And who wouldn’t love hearing Eddie Van Halen’s acoustic guitar piece “Spanish Fly” reinvented for piano? 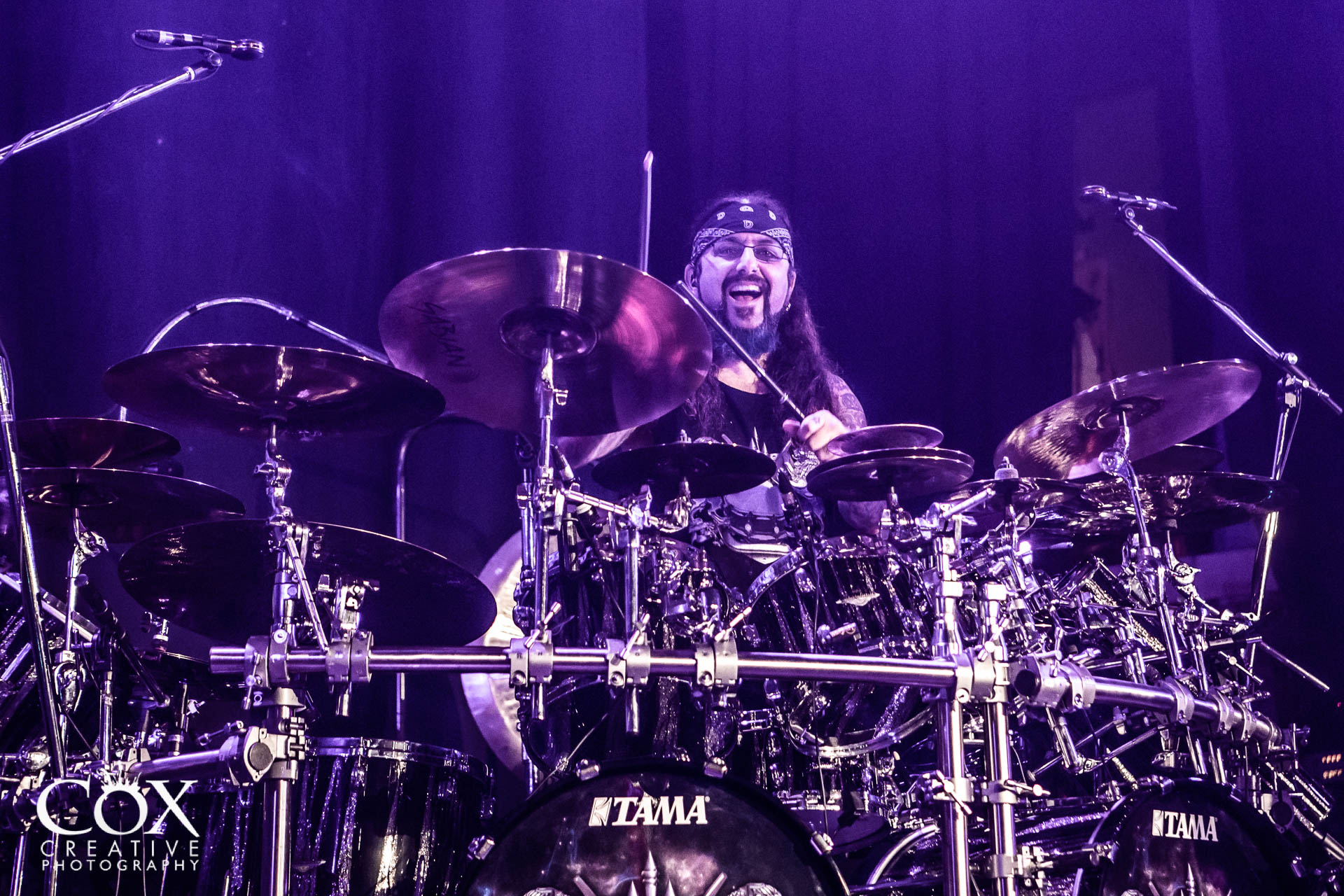 Finally, what can be said about Mike Portnoy that hasn’t already been said and witnessed? As usual, his enthusiasm, performance and rapport with the audience were over the top and completely satisfying. Despite being in half a dozen bands, he conveys such a sense of brotherhood with whomever he is playing with that you could easily think this is the only band he is in. He elevates each band to the level of the extraordinary. With Sons of Apollo he gets a significant amount of time on the mic as well, backing up Soto’s lead whether or not Bumblefoot is joining in. When Soto dedicated “Alive” to The Professor, everyone in the room understood how important Neil Peart was to Portnoy more than anyone. 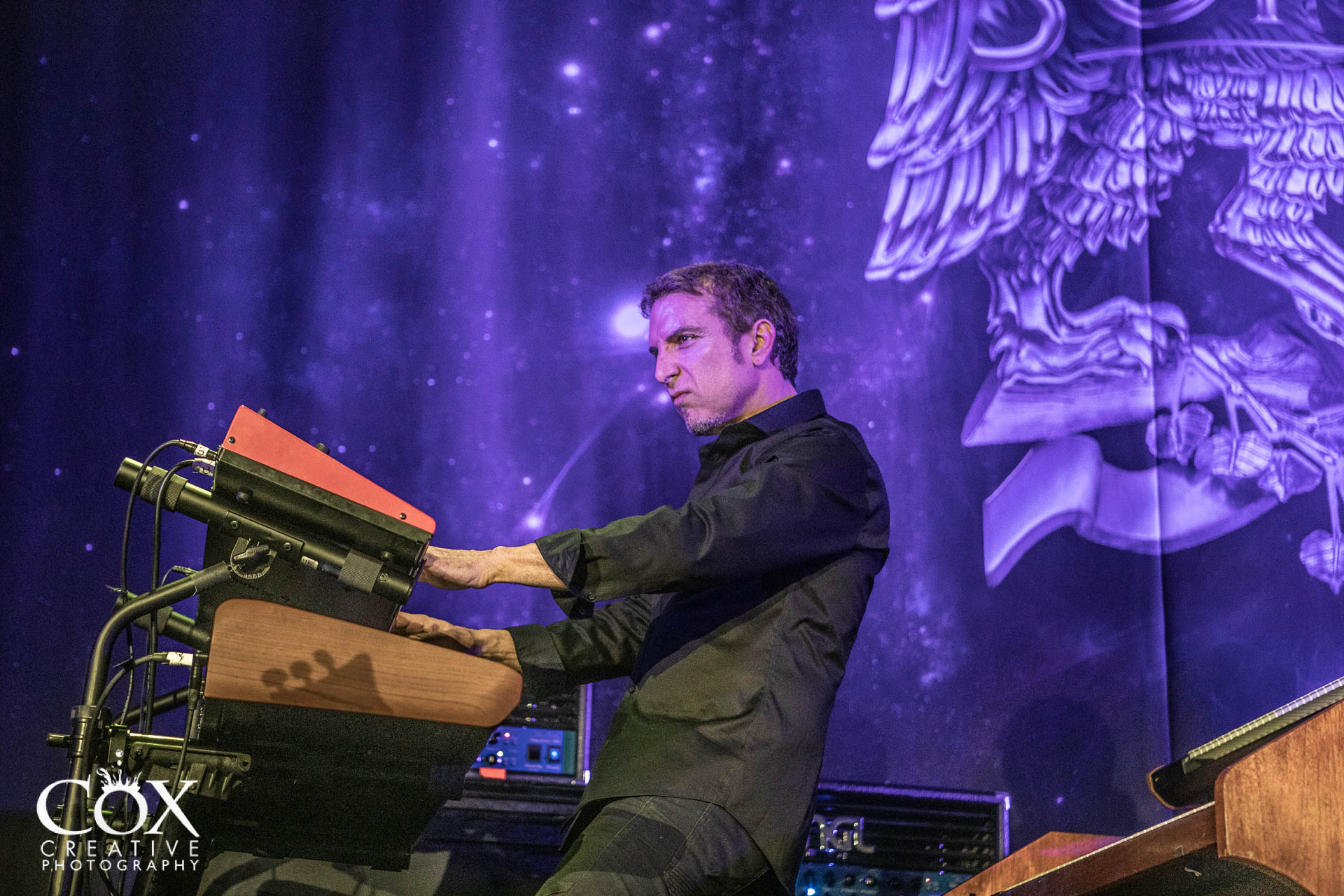 The band tackled their opus maximus of “MMXX”, “New World Today”, with precision and skill, though not without some wiping of brows after getting through some of the particularly challenging workout sections. It’s a wildly winding piece that begins with a moving Bumblefoot solo and closes with an anthemic ending, true prog-metal in all its glory. After a breather during Sherinian’s solo section they reconvened for one of their finest numbers “God of the Sun”, an epic way to finish the set. The main performance being complete, the band seemed to loosen up even further during the encore, a fun romp through Purple’s “Burn” with Tony MacAlpine joining the band to share major riffage with Bumblefoot, followed inevitably by their triumphant closing number “Coming Home”. During this final song Soto utilized what he’s learned from Freddie Mercury by engaging the audience with call and response singing, and he was delighted with the response. “Denver, you guys are going to be the crowd to beat for the rest of this tour!” he exclaimed. There was a more relaxed swagger to Soto’s stance by this point in the show, and his closing series of “Yowww”’s cemented his position as front man.

If you’re a fan of any of these musicians, you’re bound to be pleased with a show like this. They scratch an itch which is distinct from that of The Winery Dogs, Metal Allegiance, or any other Portnoy projects. Considering that there will likely be at least a 2 or 3-year gap between album and touring cycles, given the band members’ other involvements, be sure to make the most of it by getting out to see the show if it’s within striking distance. Carpe Diem, friends.