The legendary gothic metal masters Paradise Lost performed their very first live stream this past Thursday, November 5th. The social media advertisement for this event included a proper reference to the historical Gunpowder Plot (remember, remember the Fifth of November), as well as amusing videos in obvious British humor from some of the band members.  The company in charge of the streaming service was StageIt, which offers online concerts in a once-in-a-lifetime setup and they do not record or archive performances for future reproduction or distribution. This is somewhat unfortunate, since the live stream was nothing short of memorable and it would have been great to immortalize such a solemn event from the Halifax-based pioneers.

“Paradise Lost – At The Mill” was broadcasted from the band’s rehearsal studio called The Mill in Bradford, West Yorkshire, England. The band performed in a small room, or at least it seemed tiny as the space felt packed with the band and its equipment so close to each other. A couple of Marshall amplifiers, a drum-kit behind a plexi-glass wall and a dark, gloomy environment set the perfect mood throughout the complete show. Illumination and lighting arrangements were minimalistic, yet they resulted adequate for a bright video transmission quality.  Video streaming was flawless from beginning to end, meaning there were no glitches or image freezing detected. The camera shots were constantly switching in a graceful manner, focusing harmoniously on each artist in their spotlight.  A special mention must go to the camera placed on top of the plexi-glass and pointing downwards and towards the drummer, for it gave a great perspective on Waltteri Väyrynen’s playing skills.

The overall sound was dynamic and spot on. Guitars were clear, crisp and impeccable all along the set-list – we are talking about veteran axemen here. There was a pleasant mix between the guitars, the bass and the backing tracks, all in perfect balance. Nick’s current vocals were suitable for the range of styles, covering both growling and clean singing parts. When Nick’s long career is analyzed in retrospective, it becomes evident that the man can still pull all these songs off after all these years. He was truly concentrated on delivering his best performance. There were no jokes, no words and no comments from his part. In fact, the stream felt extremely quiet in between songs – a few seconds of silence followed by Waltteri’s hi-hat counts prior the beginning of the following song. Speaking of Väyrynen, his drumming was outstanding. Given the fact that he is the newest and youngest member, his performance simply stood out as he gave each song the proper feel needed to sound as per the original studio recording. 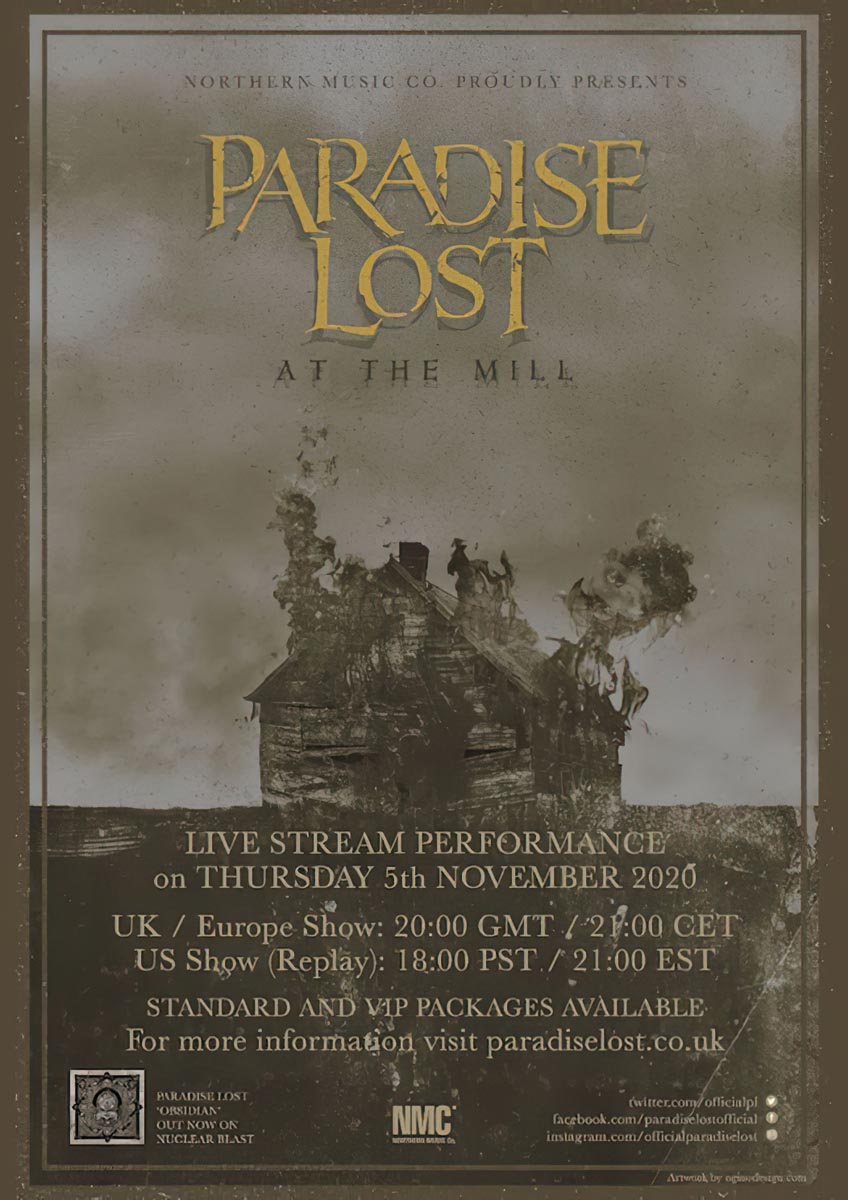 The set was career-comprehensive and a true statement on the impressive work achieved by the band over 30 years of making music. The song selection covered most of the band’s long-standing discography, from the sophomore and seminal album “Gothic” released in 1991 to their latest effort “Obsidian” released earlier this year. The band opened the live transmission with “Widow,” a song from the fan beloved album “Icon”, followed by “Obsidian”’s first single “Fall from Grace” and from that point onwards the band kept jumping back and forth in time as each song was played.

There were two ticket tiers for this live stream: a regular ticket for the first 13 songs and a VIP ticket that included an encore consisting of 3 additional songs, followed by a pre-recorded band Q&A session. A total of 16 songs from 11 albums were performed, with a 30-second countdown separating the regular section from the encore, which featured some amazing and surprising songs: “Beneath Broken Earth” (a crushing doom metal hymn from 2015’s “The Plague Within” album), “So Much Is Lost” (a track from their controversial “Host” album from 1999 when they were chasing a more electronic sound à la Depeche Mode) and “Darker Thoughts” (an acoustic dark opener for “Obsidian”).

The Q&A section started 5 minutes after the live performance ended and consisted of approximately 50 questions asked by fans on all social media platforms. The questions touched a wide variety of subjects related to particular songs, albums, cover songs, album artwork, lyrics, inspiration/motivation, favorite bands and favorite beer, among other topics. All five members were sitting on road cases as they answered each question. Nick and Greg were the most talkative, with Aaron answering every now and then and Waltteri saying a few words. Steve was certainly the most silent one.

Times have certainly changed in the music industry as the pandemic took over our regular lives. Experienced or upcoming act, it doesn’t matter: the rule of survival is to adapt to new ways of interacting with fans and audiences. In the past months, we have seen a plethora of live streams from well-known metal bands around the world, now with Paradise Lost joining the ranks. Witnessing such an iconic and classic artist submitting to the new ways sent a clear and concise message to the metal community: they still care about the fans and they want to give the most to them.

There is a considerable amount of work involved in a top-quality live stream, which some people, might not aware of. Production, streaming servers, lights, sound, cameras, instruments, location – just to mention a few. Budget and crew are also an integral part of a successful real-time experience, as well as a proper promotion in all social media platforms to lure the most amount of viewers. Paradise Lost took care of all of the above in this past live stream and they excelled at it. The ones who had the privilege of watching it shall consider themselves lucky.