Landing in Denver for the penultimate show of their North American tour, Mikael Åkerfeldt confesses that he feels happy inside. “Although you may not be able to tell, there is a big smile inside of me.” Perhaps this feeling is partially due to the impending finale of this run, which has seen the band have to actually cancel a handful of shows due to a bad case of laryngitis for Åkerfeldt two weeks prior. Undaunted by the setback, Opeth have come back in full force with Åkerfeldt’s vocals sounding no worse the wear, his clean voice soaring over the band as he seems to getting better with every album. While his growl vocals may have lost a bit of their bite over the years, he still affords himself no break while choosing the night’s material: it’s one of their most aggressive sets in years. Donning a Gaucho hat, which makes his gangly figure even a little less imposing than he already is, he doesn’t strike a classic metal image. But the band have come to deliver and by the second song of the night – “The Leper Affinity” – a large mosh pit opens up in the middle of the floor and the faithful revel in the growls and staccato hits that are offered them. 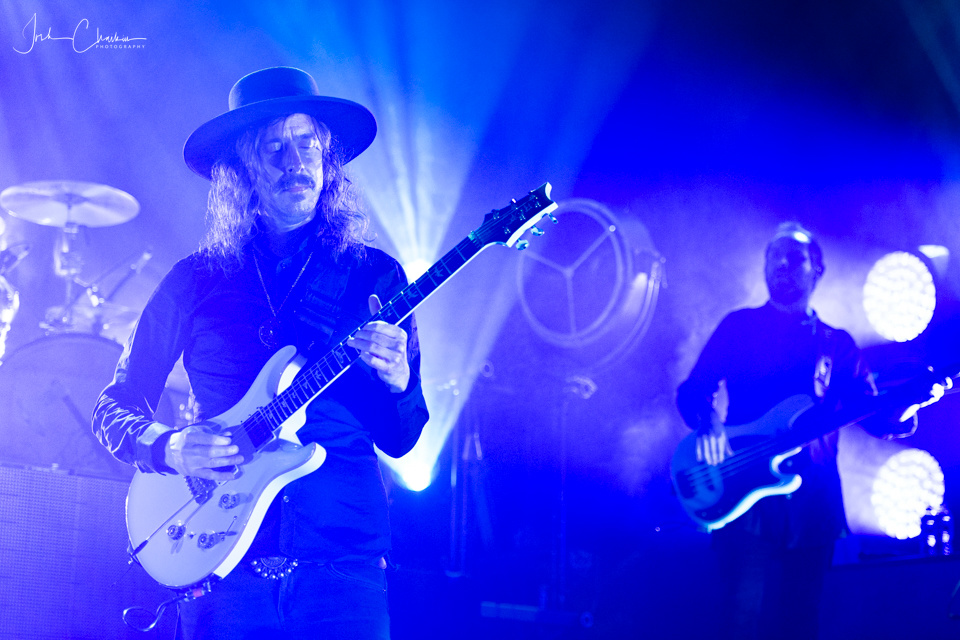 The band is touring their excellent new release “In Cauda Venenum” and if there’s a crime committed tonight it’s that the entire album isn’t played in full. Of course that would be impossible given Opeth’s illustrious discography, along with the fact that the length of their songs means the set-list usually numbers less than a dozen. Still, airing only three songs from their latest album is a damn shame, and hopefully they will make it a priority to feature the other material in future tours. As is the usual approach, they open the show with the first real song on the album “Svekets Prins” (preceded by the short instrumental pre-recorded opening “Livets trädgård”) and yes, they are singing the Swedish version. That takes balls, but it’s part and parcel of what Opeth are all about. Noteworthy is that guitarist Fredrik Åkesson belts out a few lead vocal lines here and there on all of the three new songs, sounding remarkably similar to Åkerfeldt. “Svekets Prins” is a killer song, but for some reason as an opener tonight it doesn’t pack the expected punch. Rather, it feels a bit perfunctory despite the screen projections and lights, as if the band need a little time to get on their feet before they really feel into the music. Indeed, they seem to warm up and get looser as the night progresses, with Åkerfeldt initially choosing not to talk much until after the third or fourth song. However, after that point you can’t get him to shut up between each song, which is a good thing. His dry humor is always a highlight of the shows. “For some of you this may be a magical experience tonight. While for others, it’s just another shit show.” And so it goes. 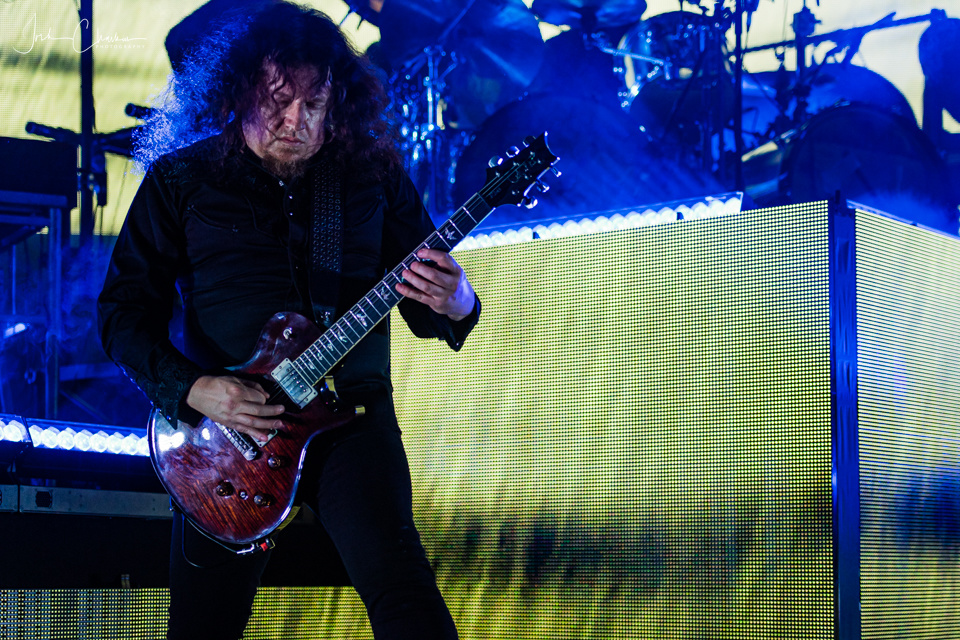 It’s always rewarding having “Harlequin Forest” in the set from their much-beloved “Ghost Reveries” album, and “Moon Above, Sun Below” offers a chance to deepen into this epic from “Pale Communion”. But it’s in some of the softer material that the band sonically sounds the best in this large hall of the Mission Ballroom, which otherwise loses much of Joakim Svalberg’s fine keyboard playing and misses the detail of Martin Axenrot on the drums. Although Åkerfeldt self-deprecatingly refers to mellow noodler “Nepenthe” as a possible “get a beer song”, it offers a chance to enjoy the talents of the band more closely, with Axenrot’s deft percussion on the rim of his drums engaging the crowd before the bursts of groove in the song rip forth. Likewise, “To Rid the Disease” is a warmly received mellow song from the “Damnation” album, which Åkerfeldt seems to imply is also the kind of material “that the band enjoys playing during the set.” Still, he’s happy to deliver one of their most popular live aggressive classics “The Lotus Eater” to let everyone get their head-banging on, before closing with the epic “Allting tar slut” (“All Things Will Pass”) from the new album. It’s a grand finale indeed with vast images of the universe blanketing the screen behind as Åkerfeldt sings. 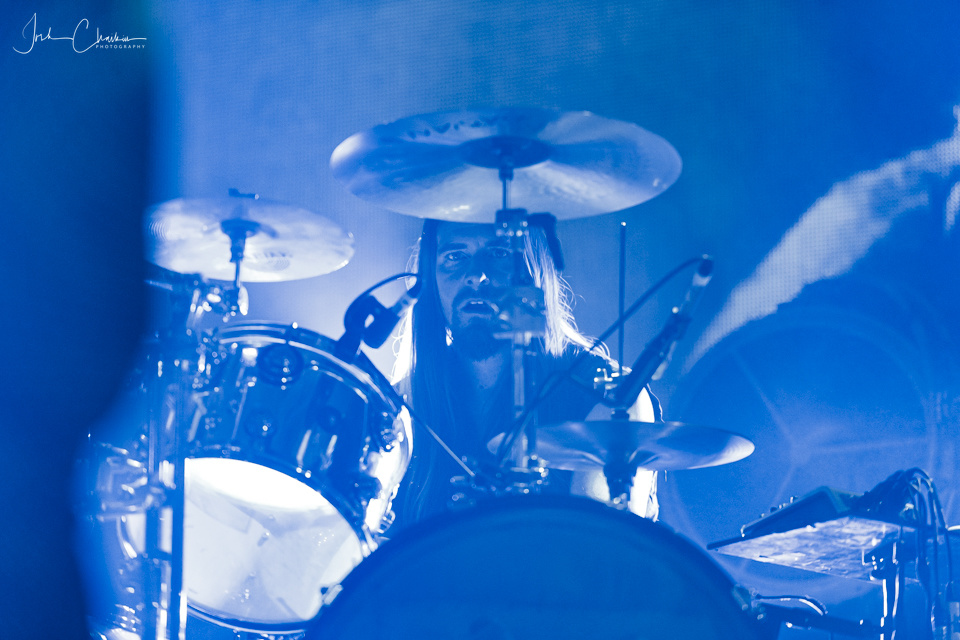 The encore doesn’t provide any surprises with “Sorceress” and closing with “Deliverance” which has made it into the majority of their sets the past decade plus, but after a rollercoaster of a ride thus far it’s a satisfying ending to the two-hour show. Everyone on stage is tight and locked into their parts, though not interacting much with each other.  The rest of the band seem fine with expertly and dour-fully playing their parts with ease while letting Åkerfeldt have the spotlight, which is how Opeth seems to work. The audience have no problem with that, either. “Denver, you delivered again” acknowledges Åkerfeldt approvingly at the concert’s end, which comes as no surprise. After all, just down the road is the legendary Red Rocks Amphitheater where the band recorded their recent live video of the previous tour. Between Denver and Boulder venues over the past two decades, Opeth have established a strong fan-base in Colorado. Although their current tour is ending, May will see them starting up again in Mexico and then down to South America before a slew of summer festivals in Europe. Coming off such a strong album, hopes are high that Opeth will continue with their deliverance for many years to come.