The Italian gothic metal band Lacuna Coil are back out on the road in the U.S. this Fall supporting their soon to be released new album, titled “Black Anima” (available October 11 via Century Media). Co-headlining tour dates with the American metal band All That Remains sees the band criss-crossing the States through the end of October, and I was able to check them out at the fourth stop of the tour at Atlanta’s Masquerade concert venue. I’ve been aware of the band ever since the release of their 2002 album “Comalies”, which included their breakout hit “Heaven’s a Lie,” but since then they fell off my music radar, and that’s a shame because wow, they impressed the hell out of me with both the presentation of their music and their performance. Note to self: put Lacuna Coil back on your music radar, now!

After the band made their way to the stage, the electronic wizardry and down-tuned guitars of “Blood, Tears, Dust” kicked off the evening’s musical selections. The signature element of Lacuna Coil’s sound is the interplay between the band’s two vocalists, and it was immediately evident in the song. Vocal powerhouse Christina Scabbia is the traditional “singer” of the band, delivering lyrics in a soaring and – at times – operatic voice while Andrea Ferro offers the counterpoint, punching in aggressive screams while also adding vocal harmonies with Scabbia. I’ve seen this type of arrangement before in other bands but never felt it was effective, but Lacuna Coil seems to consistently find a tasteful balance. 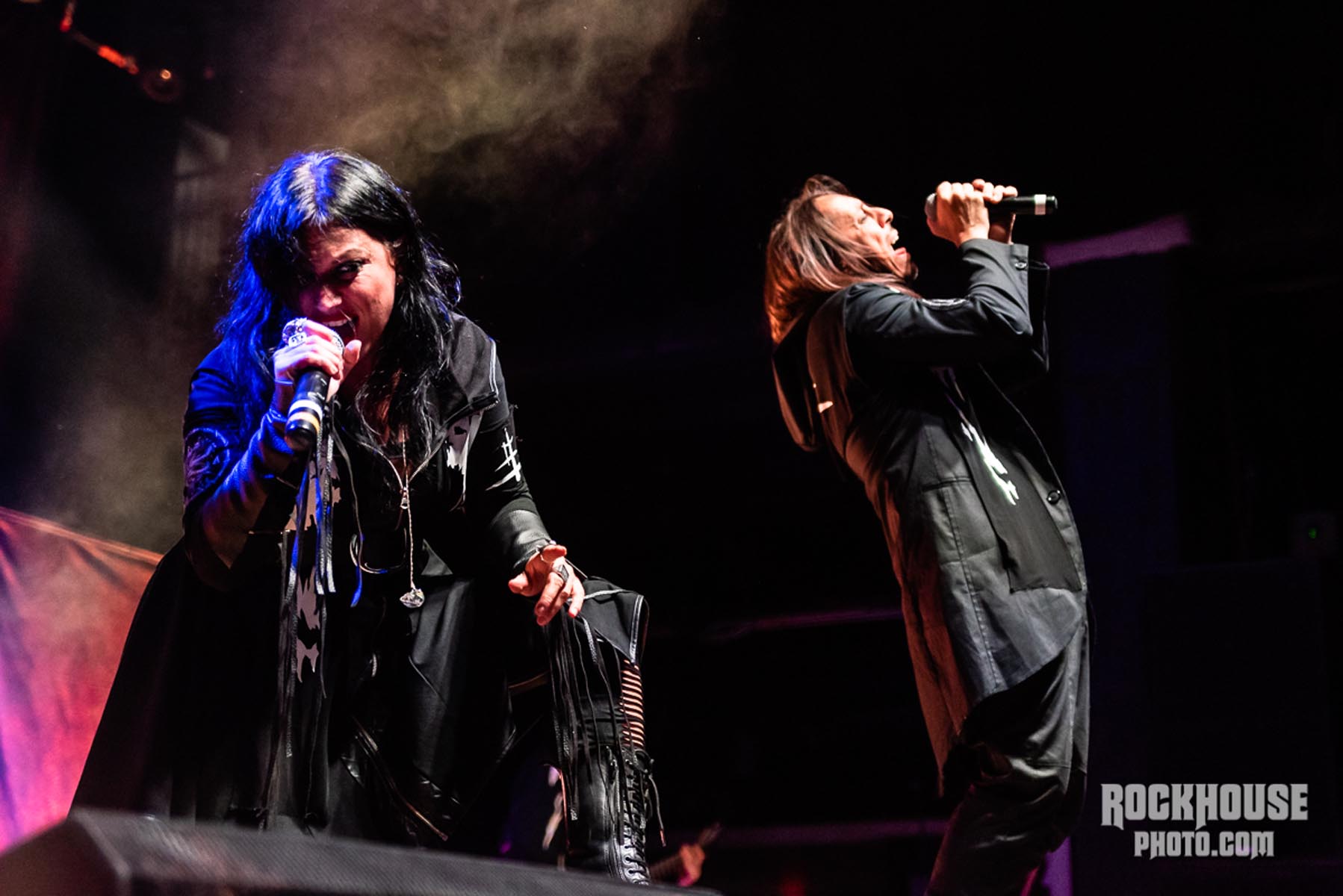 The aggressive “Trip The Darkness,” the bass-heavy rocker “Our Truth” and the hooky “Spellbound” took the crowd into the meat of Lacuna Coil’s set list before the band unveiled the first of their new songs from “Black Anima”, a guitar-driven track titled “Layers of Time” which drew a nice response from the crowd. The mid-tempo rocker “Downfall” gave guitarist Diego Cavalotti a brief moment to shine via a short yet punchy guitar solo. “Zombies” was Lacuna Coil on “full blast”: a melodic rocker with stomping sections of guitar, bass and drums.

Ok, let’s step away from the set-list for a second so I can address Lacuna Coil’s staging. It seems to me that a majority of the shows that I’ve seen lately have featured bands performing on what I consider to be darkly lit stages, with a minimal amount of lighting or stage props. From a fan’s point of view, it’s great to go see your favorite band perform live, but we do want to actually see you as much as hear you. Lacuna’s lighting was simple yet superb: a brightly lit stage with colored lights reigning down from the scaffolding; “Black Anima” stage scrims and a couple of accent lights and audience blinders at stage level. Considering the gothic imagery and dark lyrical content of the band I would have guessed that they would follow the “dark stage” esthetic but I was wrong. Combined with the band’s matching stage outfits and the zombie makeup worn by bassist Marco Zelati, guitarist Diego Cavalotti and drummer Ryan Blake Folden, the band looked amazing on stage. And in a humorous “attention to detail” moment, kudos to bassist Zelati for his personal message of “Hello Hotlanta!” which was scribbled on the very top of his head. 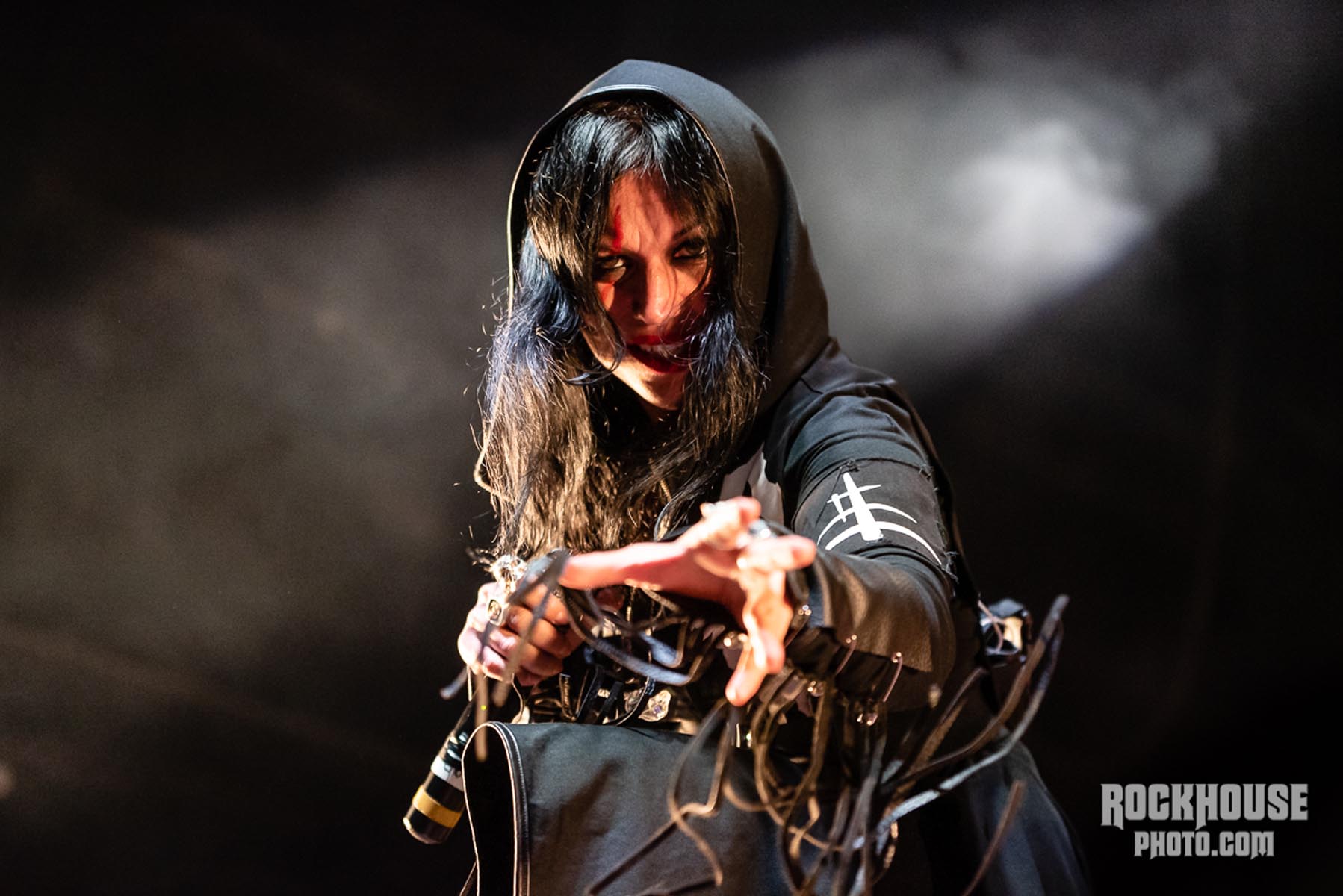 After performing “Heaven’s a Lie,” Lacuna Coil played a second new song from “Black Anima” (titled “Reckless”) before closing out the night with what seems to be the “statement of intent” for this band: “Nothing Stands in Our Way.”

So, in closing, this was a top notch show on all fronts. Shame on me for not paying attention to them up to this point, so a soon as I’m done writing this my next stop is Amazonto pick up some compact discs of the band’s back catalog. Maybe you should do the same?

Blood, Tears, Dust / Trip The Darkness / Our Truth / Spellbound / Layers of Time / Downfall / Zombies / My Demons / The House of Shame / Heaven’s a Lie / Reckless / Nothing Stands in Our Way