EPICA’s latest full album “The Holographic Principle” was released in September 2016, and was naturally followed by a support live tour, dubbed “The Ultimate Principle Tour” for their US leg with the appearance of Elantris, Insomnium and Lacuna Coil as the supporting acts. We had missed Epica a couple of times before when they played in Orlando, but since the moment they announced the Fort Lauderdale show I knew we would add them to the ever-growing list of live shows we have enjoyed over the course of the last 5 years. The Revolution Live is arguably the best metal venue in Fort Lauderdale, and probably in the whole southernmost side of Florida as well, and we have visited numerous times, nonetheless I don’t remember enjoying a live show to the extent we did that night. It was honestly a memorable night.

We arrived when Insomnium was already half way through their set, and we didn’t catch enough of their performance to formulate a solid opinion, even when the couple of songs we listened to sounded interesting, with an overall enticing atmosphere permeated by heavy riffs and dark tranquility Anathema-like moments, striking a balance between heavy episodes with guttural voices and mellow/doomy passages sporting clean vocals.

We have attended to a Lacuna Coil show around a year ago, and I remember we left very pleased. Anticipation was running high as the crowd filtered in and started to pack the general admission area, and both cameras in hand I headed to the photo pit expecting to witness a remarkable performance – yet I was sincerely blown away. With the crowd chanting their name before house lights had even dimmed, the band erupted the stage wearing psychotic ward costumes fresh with corpse paint, blood and tattered straight-jackets, with the bass player, the guitarist and the drummer also having their faces covered by bloody makeup, resembling zombie skulls and wearing sanitarium jackets. A rather spooky and eerie intro kicked off the night before launching their metal assault with “Ultima Ratio”, and that was the beginning of the storm. 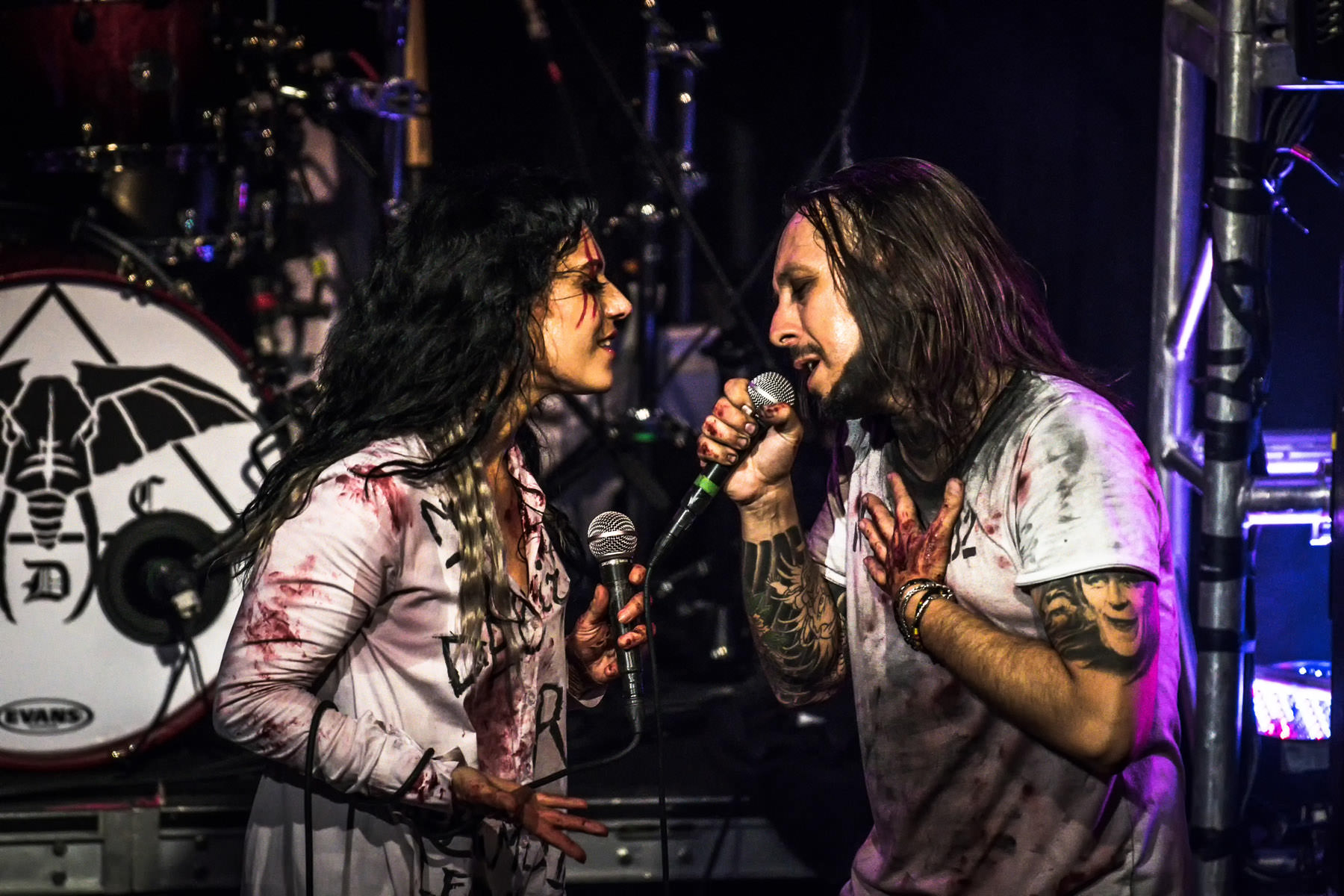 Vocalist and front-woman Cristina Scabbia, wildly shone a large flashlight into the audience’s faces before vocalist Andrea Ferro joined in and sang with the audience. Their vocal powerhouse delivery bounced lines off one another, proving their symbiotic interplay is one of the things that makes them to stand out. Nearly two decades of sharing the stage have molded the duo into one of the strongest performers in the metal world, with a dynamism and overwhelming power that grabs the audience by the scruff of the neck and keeps them chanting and singing-along frenetically. Cristina’s voice was pure brilliance, hitting notes with an exceptional level of skill, perfectly paired by Andrea’s edgy, energetic, eccentric, and passionate performance during his part in the duets. The rest of the band played with calculated precision, exhibiting a level of ability that can impress even the most elite metal fan.

The vast majority of the songs came from their newest album, with the remainder of the setlist taking a well-rounded form as the other half of the tracks took the fans in a trip down memory lane through Lacuna Coil history. Classics such as “Heavens a Lie”, “Trip the Darkness”, and “Our Truth” weaved beautifully with newer tunes like “Delirium”, “Blood, Tears, Dust”, and “Broken Crown Halo” which was prefaced by Christina and the audience chanting “We fear nothing!” in unison. Having some sort of a celebration and soaking in the crowd’s adulation while reciprocating their graciousness, Christina addressed the fans once again and mentioned they’ve been hard at work as they are set to be releasing a new book soon which the book is appropriately titled, “Nothing Stands in Our Way” – “…Next year marks 20 years of Lacuna Coil and nothing stands in our way!…” – she shouted amidst a thunderous clamoring and the band exhorted the fans to join them in a larger-than-life chant with those exact words, as the track of the same name started. With fans clashing in a vertiginous mosh-pit and things reaching their climax aptly towards the end of the show, they closed with a triumphant interpretation of “The House of Shame”.

During the entire duration of their set it was impossible to be anywhere in the venue and not be overwhelmed with the power of the Lacuna Coil’s sound. With the new members injecting a sense of fresh enthusiasm into their skilled live presentation, the Italian keep upping the ante every time we see them play. Whether you are familiar with their music or in need of discovering a live band that can blew the roof off, their show is surely one you should miss.

Ultima Ratio / Spellbound / Die & Rise / Heaven’s a Lie / Blood, Tears, Dust / Ghost in the Mist / My Demons / Trip the Darkness / Downfall / Our Truth / Nothing Stands in Our Way / The House of Shame