My wife and I were about to celebrate our anniversary and I secretly planned a getaway to Boston, some months in advance. After booking hotel, car and flight (being probably the first time in years we would be traveling without the intention of a concert or festival), I stumbled upon the news of an upcoming tour of the relatively recently formed ensemble between two of my favorite musicians: Jon Anderson and Jean-Luc Ponty. They had released their first album combining the two musical talents two years ago, and now unexpectedly they were hitting the road for a second time. A quick look at the tour dates showed a tour stop in Massachusetts, and before blinking twice I have rounded up my secret getaway surprise with two First Row – Meet and Greet tickets, exactly the day of our anniversary: May 21st. Certainly I couldn’t ask for more.

When I told the Rock at Night‘s editor-in-chief Chyrisse Tabone, she said “Damn! You are unstoppable, those tickets cost money!”, but immediately she got a brilliant idea and started working her magic, and a couple of days later she arranged a phone interview with Jon Anderson. I couldn’t believe my ears when she confirmed it. I will be actually talking to Jon! Somebody please, pinch me! And yes, it happened (You can listen to the interview here). A couple of months flew by and we found ourselves in Northampton, a college town around one hour and 45 minutes away from Boston, on the second floor of the Calvin Theater waiting to be called for the Meet and Greet experience. My wife was ecstatic. She couldn’t stop smiling and saying that was a tremendous anniversary surprise (she actually found out when she saw the show announced in the outside of the theater). It seemed I haven’t done too bad, have I?

The Meet and Greet experience was excellent. We were a small group of maybe 10 people, and we waited to be one of the very last in the line. Jon and Jean-Luc appeared serious but courteous, greeting the fans and smiling for the pictures. When it was our turn I handed my camera to Paul (apparently the tour manager) and gave him some instructions. We approached them and I shook hands with Jean-Luc and reminded Jon about our recent interview. He immediately smiled and when Dama approached them he joked “And who’s she?”

I laughed and said “I guess she’s my wife” and Jon laughed hard and began telling her I was not worthy of her company.

Paul took a couple of pictures and while thanking them I mentioned we were from Miami. Jon and Jean-Luc looked genuinely surprised and Jon affirmed he will be playing in Miami by the end of the year during the upcoming Anderson-Rabin-Wakeman tour.

I replied, “I know Jon, and then we will meet again”. He turned back to Dama laughing and said “Well, now maybe I can say he’s really worthy of your company.” It was a great moment, one we both enjoyed and remember for the years to come. But that wouldn’t be the last surprise. 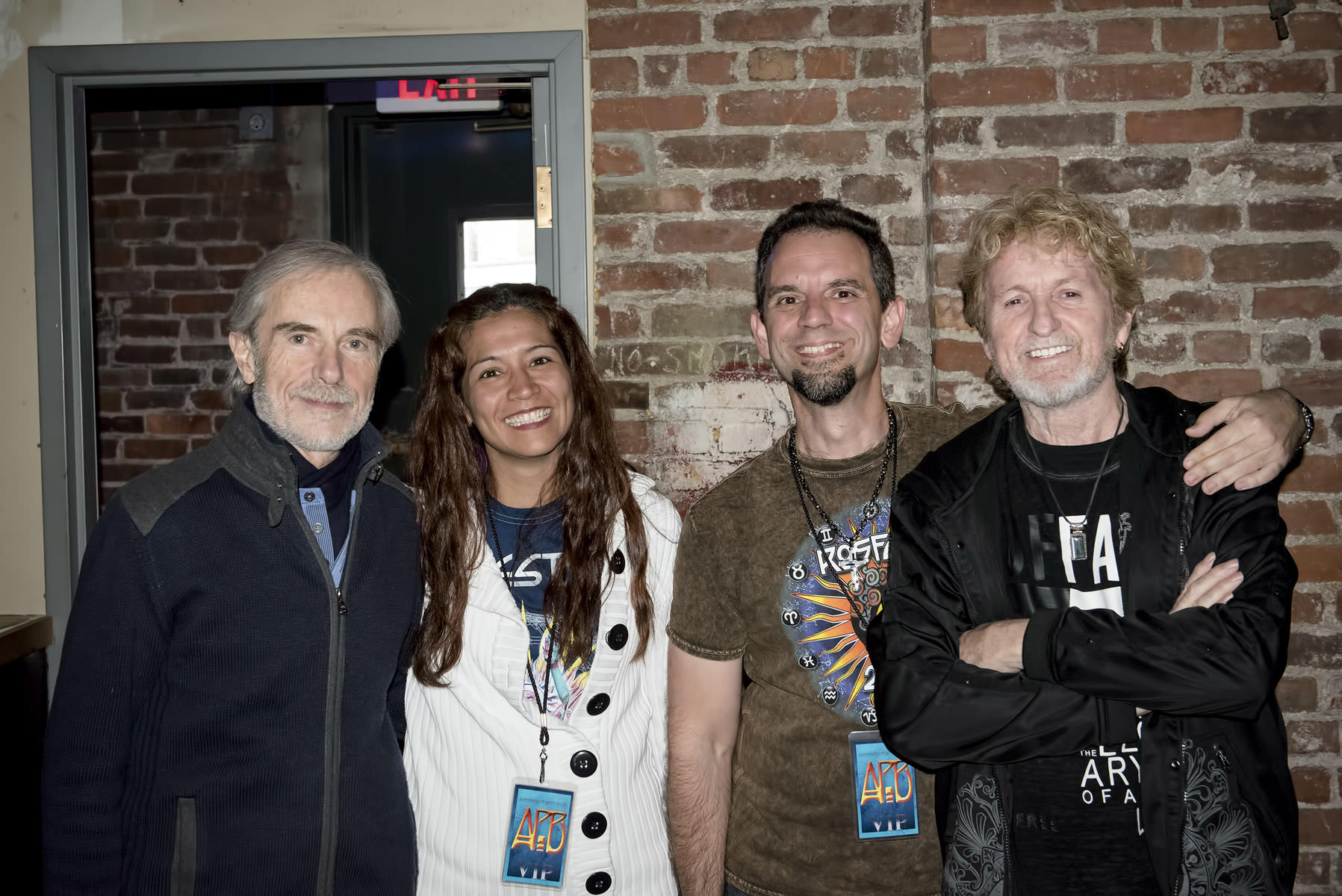 Jean-Luc Ponty, Jon Anderson, my wife, and I before the show

We went to find our seats, and I wandered around a little doing some light metering in my camera and looking around for the best spots to shoot. I only had the first three songs as per the band’s agreement, and no pictures whatsoever could be taken right in front of Jon. The venue seemed fairly empty, with several vacant seats after the first ten rows. Approximately fifteen minutes later the lights went off, the crowd started to cheer and a big screen in the back of the stage began to show some movement, some lights moving chaotically in a sort of an endless energy labyrinth.

Paul appeared in the front row walking towards us with a woman accompanied him. When they stopped in front of us and he pointed to the empty seat to my right I realized she was none other than Jane Luttenberger, Jon Anderson’s wife. I had seen her during “Progressive Nation at Sea” in 2014 since she was present at all of Jon’s performances during the cruise. I greeted her and we began a conversation. She was very polite and natural and halfway through the chit-chat she told us about the time she saved Jon’s life. I knew the story already (by Jon himself) and I mentioned her name had come up during my interview with Jon. She smiled graciously and I thanked her for helping Jon get back to doing what he does best, music. . While I was saying that Jon, Jean-Luc and the band appeared on stage.

I won’t be describing the whole concert song by song, but I will reflect on what the union of the original singer/songwriter for 35 years of YES and international violin superstar means to the fans and to music in general. First and foremost, I’ve got to say the sound mix was perfectly balanced and at the right volume. Second, I was completely impressed by the level of musicianship of Jon/Jean-Luc bandmates. Part of the set-list is composed by YES’ hits like “Long Distance Runaround”, “Owner of A Lonely Heart” and some others, but their delivery was infused with flexibility and inquisitiveness, it would be better to say they were re-interpreted with swing, improvisations, and what’s more, originality; making them sound fresher and optimistic.

Now onto Jon and Jean-Luc… you expect to see these two legends, and be in awe of their catalog of work and their unmistakable contributions to the world’s music library. However, to see them live is beyond describing. Anderson, with his still amazingly rich and three-dimensional voice, poured new wine into the wine skins of these songs. He still has that ‘delightful’, ‘love is all there is’ stage presence with short ramblings full of utter nonsense, but that’s what I love about him. He looked happy and his performance was spot on, overall reaffirming his defiant optimism about life on Earth and beyond, looking repeatedly to Jane, who was seated and moving her arms in some sort of endless Eastern dance full of mystic movements.

The new songs composed for him and Jean-Luc clearly proved Jon was the adventurous jazz/rock personality in YES. I was especially moved when Jon Anderson remembered his friend, the late Chris Squire (original bass player of YES) who died June 27th, 2015. He spoke about how Chris was always late during tour and how Trevor Rabin and the other YES band members were constantly stressed out about this fact. He remembered Chris once said: When I die I want my tombstone to read ‘Here lies the late Chris Squire’ and the audience applauded. He then continued “This song is dedicated to my friend Chris, he’s now in a better place”. After that beautiful spoken tribute, the band followed with a stirring rendition of the classic YES song, “And You and I” from the YES album “Close to the Edge”.

I had not seen Jean-Luc Ponty live prior to this, and despite being very familiar with his otherworldly violin skills, I was quite impressed with him and his approach to all the songs. His violin added extra textures and a vibrant pulse to pieces such as “Time and a Word,” while his instrumentals created foot stomping and heel clicking themes as vehicles for spontaneity. He was absolutely amazing with jaw dropping solos on almost every song. One of my favorite Jean-Luc Ponty moments happened when he led the band in “Jig” (a Celtic number from his 1982 album “Mystical Adventures”). Like all of his compositions, it was filled with impressive and complicated runs, paired with a driving rhythm truly indicative of Irish music. “New Country” had the violin master create chorus after chorus of rousing ideas whereas he delivered a tour de force improvisation.

It was a wonderful evening filled with excellent music that soothes the spirit and inspire the hearts. Anderson and Ponty have managed to create the perfect confluence of his two unique talents, a rare synergy of bottomless creativity. Their collaboration has produced a fantastic mix of old and new music, infused with a splendid and “magical” energy; which is at the same time powerful and gentle, encompassing and joyful. A lifetime achievement: a musical adventure that goes to your soul.