Chris Jericho is the true definition of a Jack-of-all-trades. Famous WWF/WWE wrestler since the 1990s, movie and TV actor, podcaster and ever writer, the New York native can also claim another trait: rock-star. His band Fozzy – moniker that some have said is a playful pun on Black Sabbath front-man Ozzy Osbourne – launched its career playing lots of covers, back when Jericho performed under the alias Mongoose McQueen, but the act has successfully and steadily risen to fame;  recently touring the US in support of their seventh studio album “Judas”, which first single and eponymous song has smashed all predictions, garnering a staggering 23 million views on YouTube.

If you have never seen Fozzy live – as it was my case before last Saturday night, when the band played the Culture Room at Fort Lauderdale as the last US tour date – you are probably missing one of the most adrenaline pumping rock n’ roll spectacles of your concertgoer existence. Jericho is a natural entertainer, one that gives his best whether he’s in front of 25,000 screaming wrestling fans, or playing for a couple hundred followers chanting “Fozzy, Fozzy, Fozzy” non-stop even before the band appeared on stage. Clad in a studded leather jacket and wearing a hat, Chris Jericho wasted no time, hitting right into their 16-song set list with the uber-popular “Judas”, and from that moment on, he owned the night. The band dived right through “Drinkin’ with Jesus”, “One Crazed Anarchist” and “Sin and Bones” before taking a break, when Jericho thanked the crowd for coming out to the show, funnily mistaken the day for Friday and Saturday, with the audience correcting him amidst cheers and thunderous clapping. 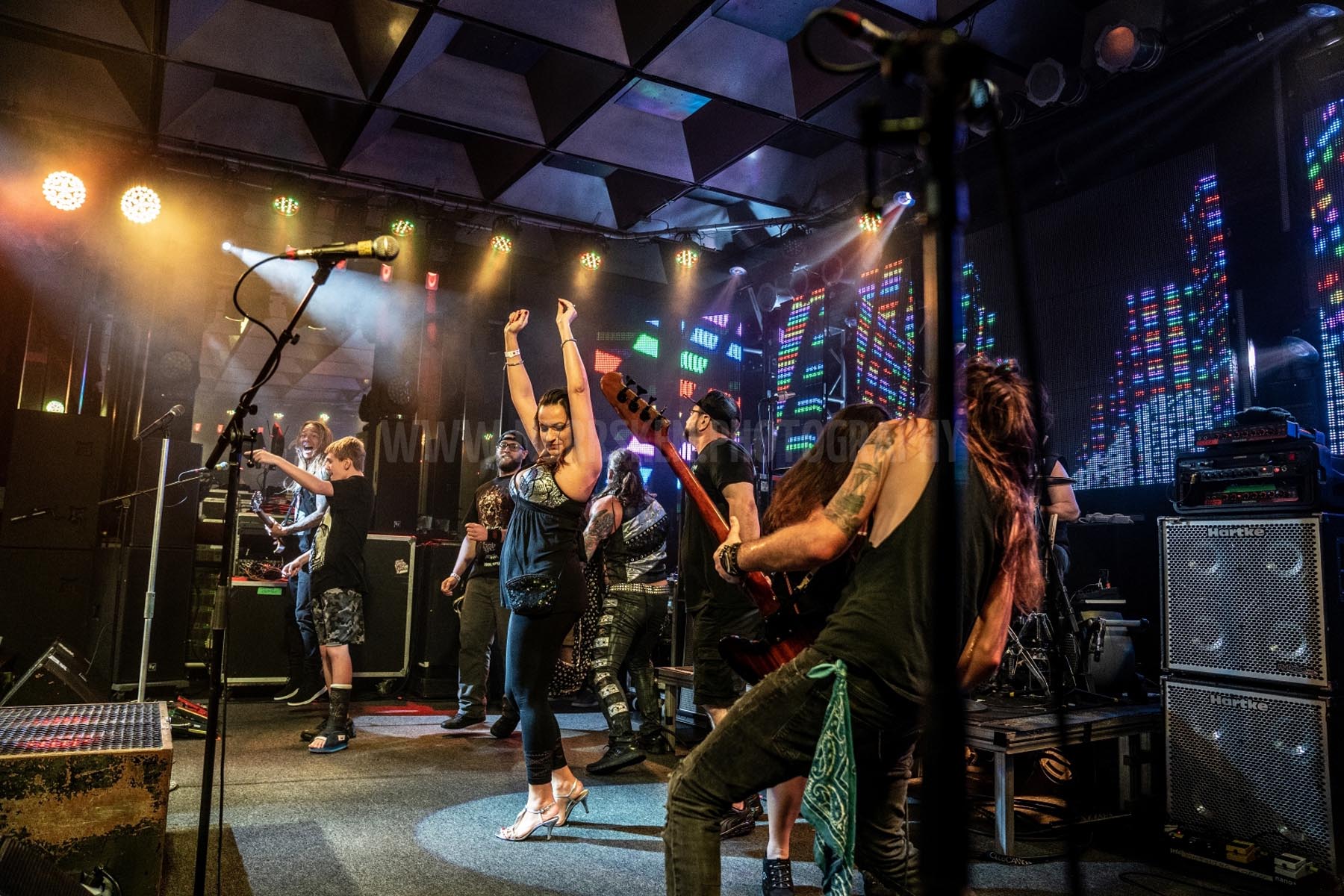 Jericho’s band-mates (drummer Frank Fontsere, guitarists Rich Ward and Billy Grey and bass guitarist Randy Drake) are a true constant-motion, high-energy rock machinery, with Fontsere playing his beats with surgical precision and the energy of a possessed maniac; while the other three moved through every inch of the stage, only staying still when approaching the mics to sing the backing vocals.  Jericho spun, twisted, and flexed, singing crisp, clear and strong from start to finish. He mugged and yucked it up with fans—and even invited us press photographers onstage to capture the fun moments of bringing 10 random fans to jump and accompany the band during an action-packed song. Halfway through the set he donned a bedazzled overcoat whose little LCD studs lit up, with columns of smoke periodically coming off from both sides of the elevated platform he was standing on, and kept the energy and pace song after song, dialing the crowd’s excitement and hype knob to the maximum position. During “Enemy” he introduced the band, joking with Fontsere‘s name, and when his band-mates started jamming the Michael McDonald‘s hit “I Keep Forgettin’ (Every Time You’re Near)”  he disappearing from stage; to later appear by the stairwell at the far end of the venue singing the final verses of “Enemy” hugging the fans around him.

After a chock-full of dynamism rendition of AC/DC’s “TNT”, he stood stage center and explained: “You all have been to a concert before, so you know how it works. Why leave the stage if you guys know we’re coming back to play another song, so let’s skip that and just play the last song, shall we?”.  Adding a funny touch he told the fans to pretend the band had left the stage while he covered his head with a towel and gestured his hands; directing the audience to ramp up their cheering as he slowly lifted the towel on his head until the final reveal. The crowd’s energy reached wild levels, with fans jumping and fist-bumping in the air, and the band pressed the gas pedal to the very end, closing the night with “Sandpaper”.

One of the most entertained shows I’ve got to see, Jericho and company can turn the night into a frenzy-induced workout routine, and you will find yourself laughing, screaming, singing at the top of your lungs and having an absolute blast, whether you are already familiar with FOZZY‘s repertoire or simply a first-timer like I was.


Judas / Drinking with Jesus / One Crazed Anarchist / Sin and Bones / Burn Me Out / Painless / Spider in My Mouth / Elevator / Do You Wanna Start a War / SOS (ABBA cover) / Lights Go Out / Wolves at Bay / Enemy (with band introduction and “I Keep Forgettin’ (Every Time You’re Near)” – (Michael McDonald cover) segment / T.N.T. (AC/DC cover) / Sandpaper