There are many labels that could be slapped onto the phenomenon that is Chris Jericho, but for this trustee of latter-day Gen X and metal culture circa the turn of the millennium, jack of all trades is the one that accurately sums up the alter-ego of one Christopher Keith Irvine. Though he is often cited for his work as an author, podcaster, actor and entrepreneur, he is arguably best known for his larger than life character performance with the WWE from 1999 until just a couple years ago. Concurrent to his ascent in popularity as a professional wrestler was a rather unique move into the world of metal music via a collaboration with Stuck Mojo guitarist and co-founder Rich Ward dubbed Fozzy, which was initially regarded by many as a joke band given the moniker sounding identical to a Muppet character and their practice of largely covering iconic early 80s heavy metal anthems in a time when it was still considered highly unfashionable to do so in North America.

Regardless of what one might have originally assumed about the rationale behind the band’s genesis, they proved themselves highly proficient in emulating the old style and pivoted seamlessly into a formidable American metal export that built an impressive catalog of original material by the end of the 2000s. But even more impressive than their studio work would be their commitment to bringing their craft to audiences the world over in the flesh, showcasing a working man’s ethic that would set them apart from the crowd. This ethic would see this band pull off something never done before on September 18th, 2017 while touring on their seventh studio LP “Judas,” namely perform in 3 different states in a single day. Chartering a private plane for the event that would be known as “Fozzy Across America”, this monumental feat would see the same set performed in Ft. Myers, El Paso and Las Vegas over a span of about 14 hours when including travel time.

Fast forward to the present touring wasteland due to the events that have enveloped most of 2020, it seems only fitting that this now superstar outfit would lend their talent to the Live-stream craze. Reviving most of the same set list that made up their previous tour, the Capturing Judas Livestream Event would combine a cinematic experience with a more down to earth, up close and personal performance from the band’s recording studio. Kicking off the show would be a slickly produced 30 minute documentary of the aforementioned “Fozzy Across America” event that gave all the assembled online viewers a taste of how things were prior to this year, as well as a preview of just how capable all the person’s involved are at their respective instruments. But even more effectual were the testimonials given by all involved in between the bits of live performances of select tracks off the “Judas” album, with Jericho and drummer Frank Fontsere providing most of the comic relief with their backstage antics.

Following the cinematic appetizer, the sonic feast that ensued at 9:30 PM EST (6:30 PM to all you West Coasters out there) proved a bombastic yet also calculated affair. Following a barrage of kinetic energy via the quasi-speed metal opener “Sin And Bones”, the title song off the 2012 album by the same name, things would settle into more of a mid-paced, banger oriented groove as most of the selections were isolated to the two most recent albums. The mixture of modern rock influences with Jericho’s 80s sleaze-infused vocals (giving way to occasional nods to Ozzy Osbourne’s nasally snarl) prove an interesting blend, with such noted anthems as “Burn Me Out” and “Drinking With Jesus” being obvious standouts. A preview of things to come would also be trotted out in “Nowhere To Run”, a lone offering from what will be the next Fozzy LP that largely conforms to the same methodically structured grooving rock/metal sound that typifies the band’s current sound.

To say that the show was proving to be a fanfare medley would be an understatement. To the band’s credit, they made the set list work despite a lot of similar material by cutting it up with a lot of anecdotal takes on where the band had been over the years, with recently acquired bassist and longtime Trixter member P.J. Farley providing some interesting biographical information that tied in nicely with the rest of the band’s reminiscences. But the lid would be blown off the pressure cooker yet again following the conclusion of “Painless” with another infusion of speedy metallic thunder with “Wolves At Bay”, arguably the most metallic offering from the “Judas” album. In what can be described as the perfect one-two punch, the follow up to the aforementioned pedal to the metal romp would be a throwback to the early days in 2005 with a brilliant rendition of “Enemy”, featuring an epic lead guitar battle between Rich Ward and Billy Grey after the spirit of Tipton vs. Downing and all the floor pounding goodness that a growing metal head needs.

Though there wasn’t an official encore to close off this celebration of fist-raising anthems, with the apex point being hit with “Enemy”, the duo of songs that would follow could be seen as such. Turning back the clock 8 years to the “Sin And Bones” album, the metallic stomp of “Sandpaper” proved a fitting follow up to the aforementioned climactic two song showcase, which is immediately chased by the hit title anthem off the “Judas” album in all its modernized homage to “Shout At The Devil” era Motley Crue glory. The show would close on a decidedly straightforward note, with each band member giving a simple send off to the audience and a promise of future shows once things get back to normal. But for the seeming abruptness of the show’s conclusion and the favoritism towards newer fan favorites over their older and more technically ambitious material, one couldn’t help but reflect upon the heavy amount of dialogue between the band and noting that despite the largess of its charismatic front man, this was indeed a collective effort, and a solid one to boot.

Head over to https://fozzy.veeps.com/ where the event will be on demand and available to purchase until November 29th! 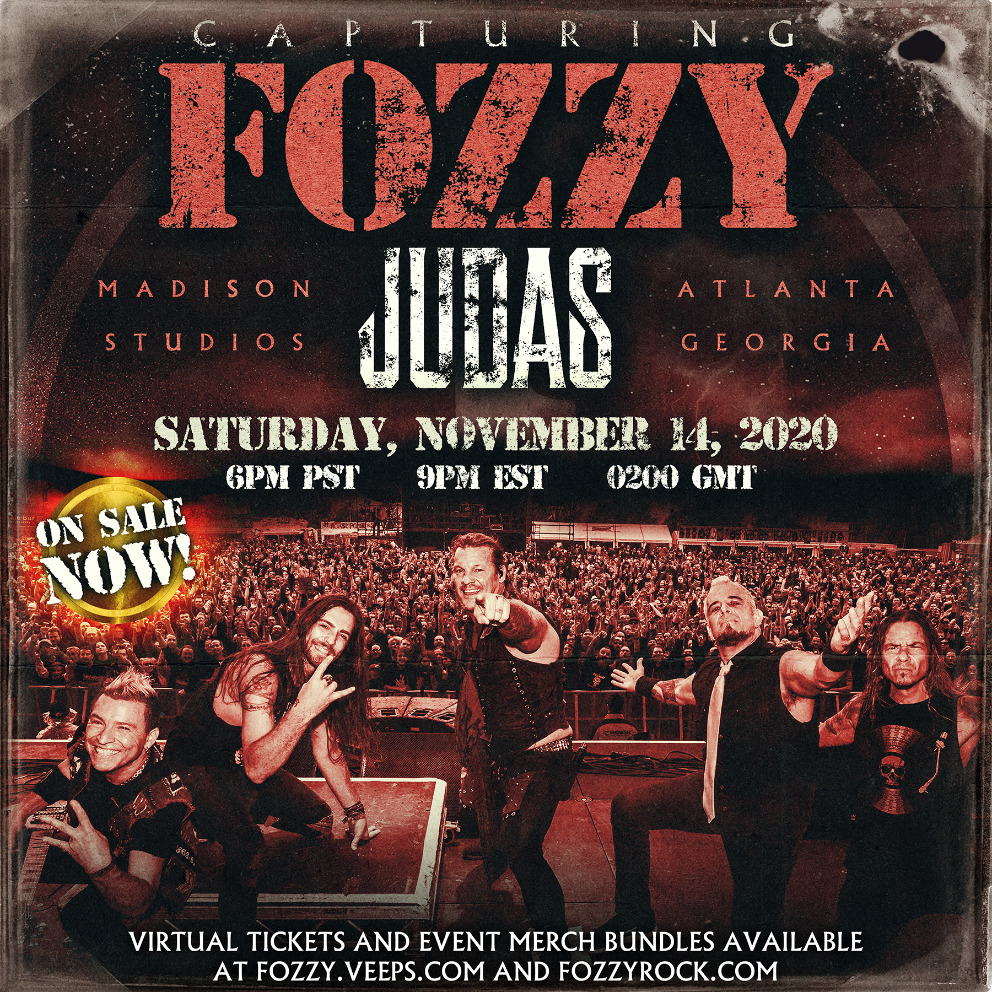