Oh, for the love of music!

Every once in a while I take in a show where it’s simply all about the music. It’s not about the money. The fame. The chicks or the scene. Just a collection of gifted musicians using tones, timbres and textures to express themselves with each other, and the audience. It rises to another level of entertainment when the musicians on stage have a master command of their instrument and deep vocabulary from which to draw from when interacting with each other. Coming from the amps is a steady stream of instrumental exchanges, banter, tension, speeches, questions and answers, conflicts and conclusions. There are temporary peaceful resolutions, only for the communication to bank 90 degrees into completely new territory again. As each new compositional conversation concludes, there’s genuine satisfaction with all involved, knowing that they’ve really been heard.

Such is the case for the Dawn of the Dregs tour, which acts as a long overdue reunion among old friends who are having a wonderful time revisiting a collection of musical conversations that are being updated with whatever the members have to say in the here and now. The mostly male audience is an eclectic bunch. They are dominantly musicians. They speak the language. They recognize the mastery of the players on stage and have come in part to be inspired to improve their craft (or consider giving it up). They have been waiting a long time to witness these musical discussions take place in a live format again. In addition, their patience is being rewarded.

Over the course of two very diverse sets of a sold out show at the Boulder Theater, members of the Dixie Dregs kept their fans smiling as they anticipated every upcoming twist and turn with a bobbing head, a taping foot and constant flurries of air and drum guitar. In fact, anticipation was so high, the show quickly sold out and an additional performance was added to the night before. Colorado welcomed the band back with open arms and wallets.

Formed in the early 70s out of the University of Miami’s School of Music program, the Dixie Dregs members began an unpredictable and unscripted journey of musical exploration that included ongoing lineup changes, label bankruptcy, Grammy nominations, critical acclaim and underwhelming record sales. The talent was undeniable, but the path to commercial success remained elusive, and the members eventually went separate ways to pursue new opportunities. 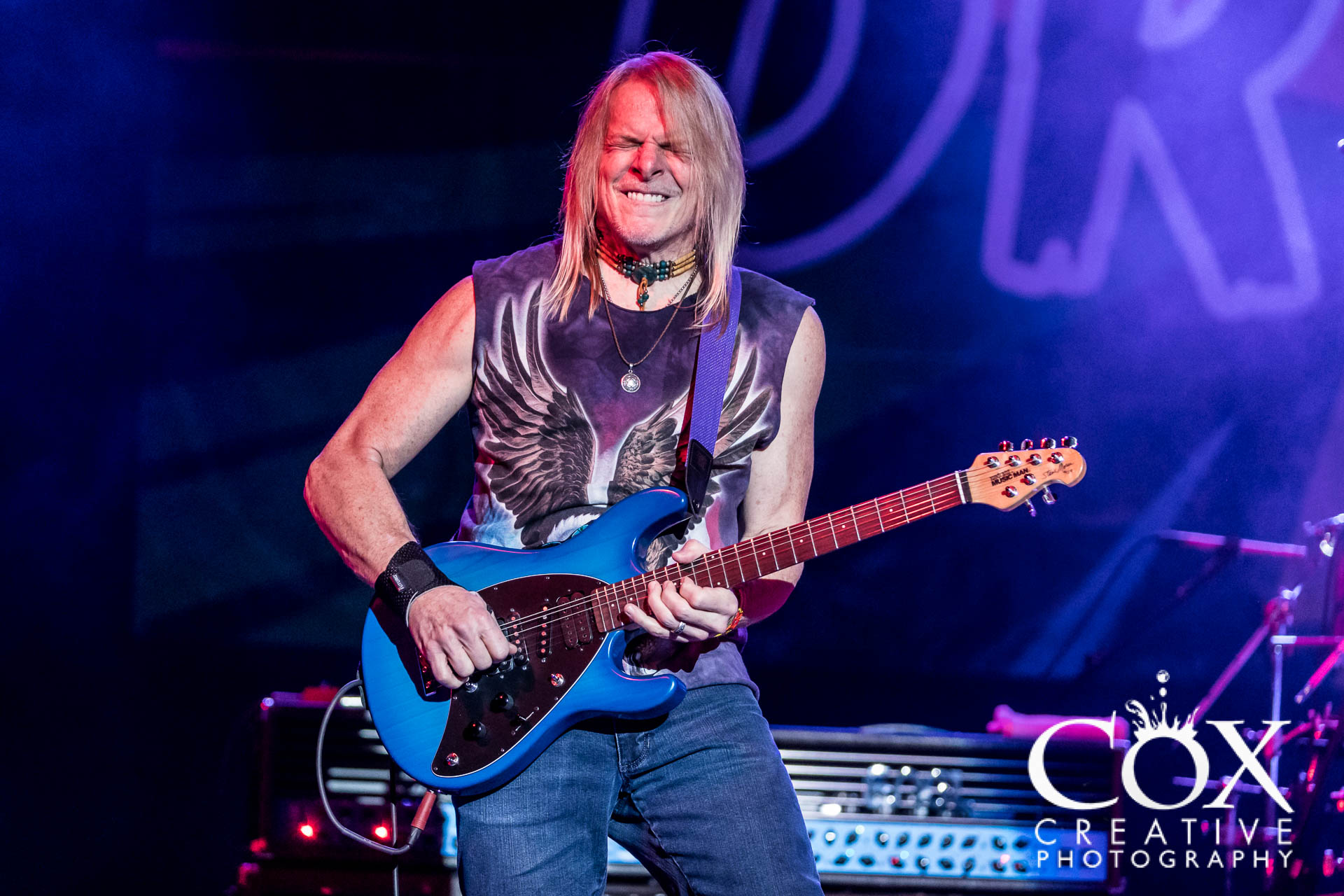 Guitar player Steve Morse, who writes the vast majority of the material, launched the Steve Morse Band, and then went on to become a member of Kansas in the 80s. In 1994, he joined Rock and Roll Hall of Famers Deep Purple, where he is now the band’s longest-serving guitarist. He’s also a member of the pop/rock super-group Flying Colors. Among the guitar playing community, he is well recognized as one of the greats in part due to his interest and ability to play many different styles with authenticity and precision.

Drummer Rod Morgenstein has also enjoyed much critical acclaim, initially being a part of the Steve Morse Band. When Morse went on to join Kansas, Morgenstein teamed up with Winger (whose MTV reputation unfairly represents the complexity and remarkable musicianship of that hard rock ensemble). He was a five-time winner of Modern Drummer’s best progressive rock drummer and has a strong history of teaching technique and theory both on video and as the professor of Percussion at Berklee College of Music in Boston.

On Saturday night, Morse and Morgenstein put on tremendous display the magnitude of their musical prowess. The set list covered a vast amount of ground, both in terms of the style and the source from the band’s catalog. I had invited a friend to the show who appreciates musicianship but was unfamiliar with the band. After the opener, “Divided We Stand” and subsequent “Free Fall,” she looked at me a bit puzzled and asked, “What genre are these guys?” I thought for a moment but was unable to categorize them. “They are their own thing!” I shouted back to her. And they absolutely were. Over the course of the 21-song set list, the band gave us a whiplash inducing mixture of instrumental rock, jazz, avant-garde, classical, country, baroque chamber music and bluegrass. No genre was spared, and yet all were performed astoundingly well. Every member on stage had his spotlight moments to show off and shine. All made convincing cases that they could hold their own with the other stellar players on stage. Rather than competing, they were combining to deliver a powerful musical onslaught.

Steve Morse maintained a humble stage presence, despite the ferocity of notes he delivered throughout. He was every bit the guitar hero one would expect to see, but seemed intent on delivering an ensemble player’s role. Rod Morgenstein delivered the most animated and interesting performance, I’ve ever seen him play. He was fiery and wildly active, using every possible piece of his entire kit of drums and percussion. When cymbal strikes revealed his face, it was usually with a massive grin or bulging eyes and gaping mouth. He embodied the joy of playing all night, and his kit sounded fantastic. Sadly, some of the other instruments had varying degrees of clarity and punch, with some of the nuances and intricacies of Morse’s quick picking being buried at times in the mix. 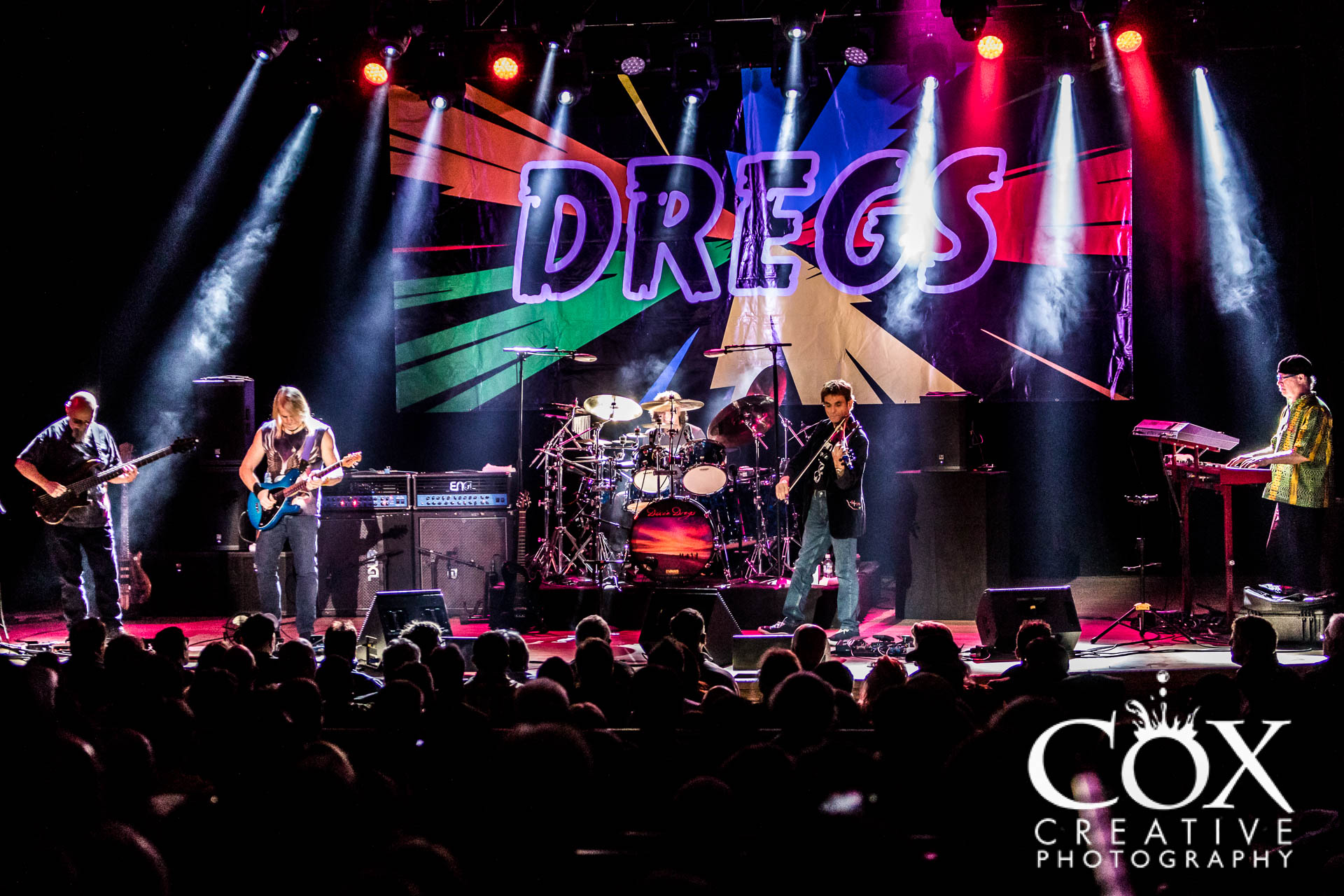 Andy West was pleased to be reunited with a borrowed bass that was used on original Dixie Dregs recordings, and has since found a new owner. His unflashy stage demeanor and engineer-like personality let the notes stay in the spotlight, and when the times came to be featured, he always sounded on task. Steve Davidowski took the award for the ugliest stage wardrobe, but his jazzy runs and synthetic solos were in far better taste than his shirt. He also established his full-blown capabilities as a player and well deserved spot among this collective of playing titans. Allen Sloan, who left the Dregs to pursue an active medical career, was radiating with joy at the opportunity to be embraced for his playing again after many years out of the spotlight. He and Morse often doubled fast and intricate lines in the songs that sounded just as they should.

The first set was strong, with highlights including “Twiggs Approved,” “Take It Off the Top” and “Country House Shuffle.” However, whether it was a result of a more dialed-in sound or the band simply being more warmed up, the second set was significantly stronger. Starting off very subdued with “Rachel”(Allen Sloan’s solo tribute to his daughter), followed by the eclectic “Northern Lights” and “Go For Baroque,” they built up steam with “Day 444,” eventually catapulting to a fervor with raucous renditions of “The Bash” and “Cruise Control” that featured fantastic trading lines for solos between all members at breakneck speed. The encore of “Bloodsucking Leaches” punctuated the evening with it’s feel-good rock tone that had the aisles full of smiles as the lights came up and the band took a team bow. Morgenstein was sporting a Colorado t-shirt that symbolically summed up the apparent mutual admiration society that exists between the band and the Rocky Mountain Community.

This show was a reunion of friends having an undeniably great time playing together again. It was all about the music. And the music was exceedingly good.