Norwegian band WOBBLER are veterans of the Norwegian progressive rock scene, as well as a renowned and established name in progressive rock circles, with a career going 18 years back and with concerts in most parts of their world on their resume. Emerging from a silence of several years, they have now returned to the forefront in the current progressive scene with his new album entitled From Silence To Somewhere, the fourth of their career. Wobbler were formed in 1999 in Honefoss in Norway and are now working from Oslo, releasing three previous albums, their debut Hinterland (2005) being followed by Afterglow (2009) and then Rites of Spring (2011). The collective currently consists of Lars Fredrik Frøislie (keyboards and choirs), Kristian Karl Hultgren (bass, bass clarinet and bass pedals), Martin Nordrum Kneppen (drums, percussion and recorder), Andreas Wettergreen Strømman Prestmo (lead vocals, acoustic guitar, glockenspiel and percussion) and Geir Marius Bergom Halleland (lead and acoustic guitars, and choruses), being Marius the newcomer after the departure of their guitar player Morten Andreas Eriksen.

Before going any further, I must confess I’ve listened to this album more than 20 times in the last few weeks.  The album from the outset has the sounds and ear candy of the classic progressive-rock of the golden 70’s era when the sub-genre was at the peak of the mountain: old 70’s symphonic prog-rock using old vintage instruments, such as analog keys, Mellotron, and flute. Wobbler have made a name for themselves as purveyors of high quality, old-fashioned era harmonies, and this is album is no exception: one of those records that that astonishes me more with every new listening and feed itself from itself. An enigmatic, multi-flavored and adventurous creation, brew in the old black cauldron. Poignant and edgy guitar riffs, melancholic and harmonious verses, powerful crescendos, energetic spinet driven passages and the odd touch of flamenco and Italian recitals. Four epic songs, clocking in at 47 minutes. thematically spinning around wandering views of metamorphosis, change and alchimia – a bit of a continuation from the previous album “Rites at Dawn”, but slightly darker and more introspective. 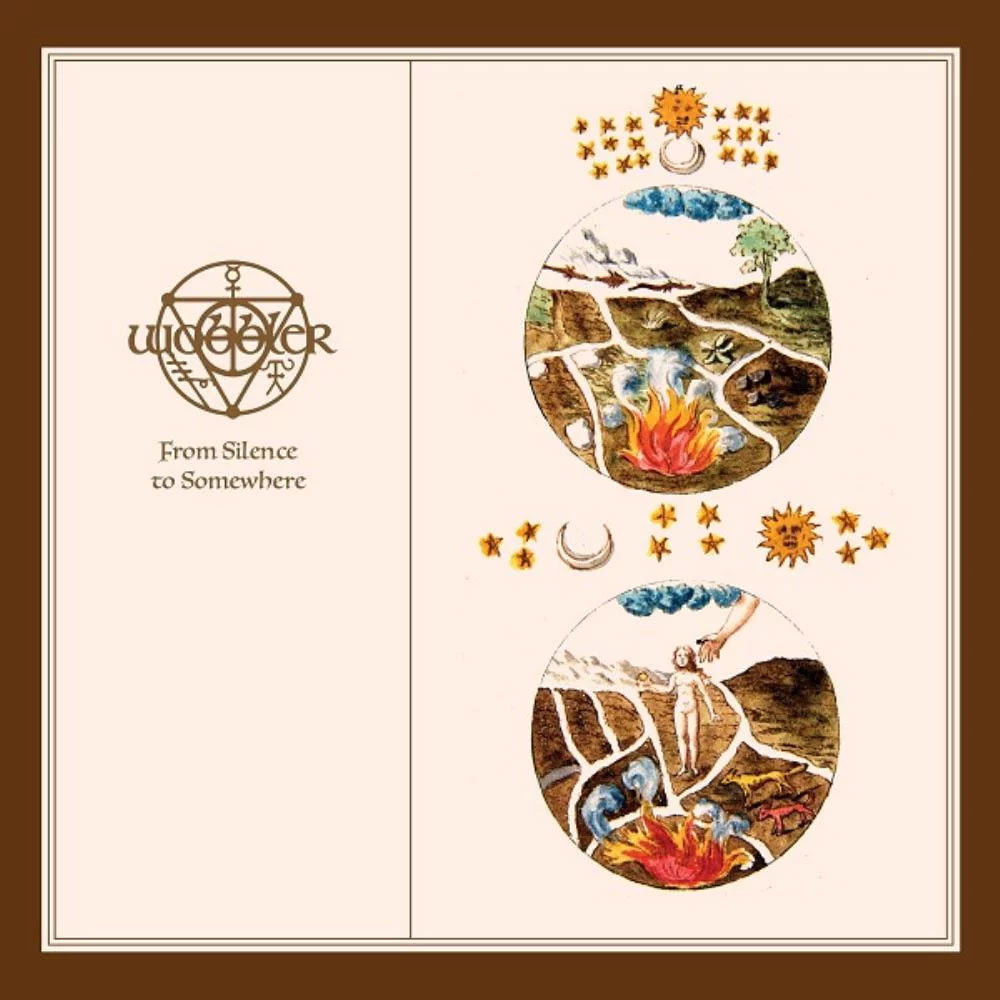 “From Silence to Somewhere” album cover

The album opens with the title track and at over twenty-one minutes this is an epic offering which almost plays like a classic prog-rock tick box; we have vintage keyboards in the shape of Mellotron, Moog and Hammond, Rickenbacker bass, flute, accompanied by some tight drumming, great guitars and the precise vocals of Andreas Wettergreen Strømman Prestmo. Layers of guitars and Chris Squire-style bass lines permeate the intro, leading into multiple dynamic movements ranging from pensive to frantic. The organic music switches moods throughout, from melancholy and reflective to uplifting melodies with intense emotional power, diving into some fascinating moods, powerful crescendos, and twirling content. One moment the listener may be reminded of the early Focus or Yes sound, and the next the music wanders into Rock Progressive Italiano territories. The band navigates between atmospheres with refined delicacy while certain confluences of veteran retro-prog bands of later generations such as Änglagård and Thieves Kitchen made presence.  The second half of the song becomes a little darker, the excellent pounding bass lines creating the mood which then leads back to more gentle atmospheric finish, with the final passage bearing a tranquil and ambient mood, “boughs of green, so gently dancing in the wind, embracing the earth, my death and my birth, here I lie, at peace in solitude forever until I’m stirred from my nest like a bird and soar into the world once again.”

The second and shortest track here, “Rendered in Shades of Green” (at just over two minutes) is a piano driven instrumental piece, building as various keyboards are added throughout; synth strings, and tuned percussive mixed in for the second half. When the turn of “Fermented Hours” arrives, the band picks up the harvest of the monumental piece of entrance and prepares to concentrate on the most robust aspects to start the new work with a categorical and overwhelming rock solidity. It opens with the sounds and freneticism of Yes’s “Sound Chaser” (some sort of a prog-rock version of an Iron Maiden gallop) dropping down into a swing rhythm momentarily before featuring what I believe is a glockenspiel solo adorned by keyboards in ELP’s “Tarkus” territory. The time signatures are off the meter, and there are some intricate instrumental passages. It’s ten minutes of proggy bliss, with remarkable diversity in musical and vocal instrumentation choices and styles, keeping you in the edge of your seat waiting for whatever new and astoundingly unexpected shift the music would take. An outstanding example of how great music can be, relentlessly inventive and daring beyond the barriers of preconceived concepts.

Lasting just under 13 ¼ minutes, “Foxlight” closes the album offering an open counterpoint to the stately vehemence that had reigned in “Fermented Hours”. It opens with flickers of flute and sweeping Mellotron that floats along acoustic picking, before the vocal section begins its play. Around the 3:42 minute mark the delicacy ends and a loud, bombastic sequence of chords opens: An extended section of harpsichord, acoustic guitar, Mellotron, and flute pervades the atmosphere accompanied by meaningful lyrics: “Bewildered here down at the crossroads, confronted with the choices for my epitaph, a distant flame gives me a sign, shows me a path within my mind” A kind of “Cinema Show” dream-sequence takes over which some beautiful harmonized group vocals and flute, before the symphonic arrangements erupt back in, for a sizzling finale of Gryphon style medieval music over a dollop of flute, masterfully segueing into a climax of Gentle Giant style a-capella multi-layered accords with horns (or maybe even kazoos). Andreas’ voice even sounds a bit like an older Kerry Minnear in the “la la la la la la la la” harmony, with loud staccato stabs of organ and guitar. A brilliant composition, and my personal favorite of the record, this song is a proper reverence to the best prog-rock heritage of the 70s.

Production wise, this is one of the best-sounding albums of 2017. The music thrums and resonates with a polished balance and an organic nature that’s perfect for the style. The playing is faultless, dynamic and bold, with so much injected passion that it is difficult not to feel overwhelmed by the utter bombastic grandeur. The vocals are very close to vintage Peter Gabriel or Jon Anderson, yet that similitude only adds to the aural retro feel of the record. A complete joy to listen to, it’s almost hard to gauge how good From Silence to Somewhere is. A definitive manifesto of how you can sprout, organize and give birth to musical greatness after a long time of hibernation From Silence to Somewhere is Wobbler at its best. Displaying a perfect balance between emotions and musical creativity that echoes in a captivating experience, this record rings as a prime example that the sound of classic prog-rock is alive and kicking. Contender for progressive rock album of the year? Absolutely! Do not miss it!

“From Silence to Somewhere” track-listing: